Plug-in hybrids such as this new Volvo XC40 are a curious breed, but you can see why car makers keep churning them out.

The EU’s strict new CO2 targets come into effect this year, and PHEVs are a sure-fire way of reining in manufacturers’ fleet average emissions figures. And, of course, they make for a good stepping stone between regular internal combustion-engined cars and pure EVs. But if we’re to believe that every new car sold from 2035 (or perhaps 2032) will have to be emissions-free, it’s tricky to ignore the feeling that they’re being developed and promoted at great expense in the knowledge they’ll soon be obsolete.

Anyway, you can see why the concept might appeal in the here and now. With its 81bhp electric motor and 10.7kWh battery, this XC40 T5 Twin Engine can travel as far as 28 electric-only miles before its 178bhp three-cylinder engine fires up and takes over the task of driving the front wheels. So if you charge it regularly and use it mainly for short hops, it should theoretically cost very little to run – despite the fact that it’s actually a 1.75-tonne SUV.

This ability to run on electricity alone for short distances is also why PHEVs are currently so inexpensive on the company car tax front. As long as you get your spec right, this XC40’s WLTP-certified CO2 rating drops as low as 47g/km, equating to a massive benefit-in-kind tax saving when compared with a standard diesel or petrol XC40. This applies even if the owner then treats it as a regular car and runs it almost exclusively on petrol power, which doesn’t seem entirely sensible. But like it or not, it’s where we’re currently at in the world of new cars. 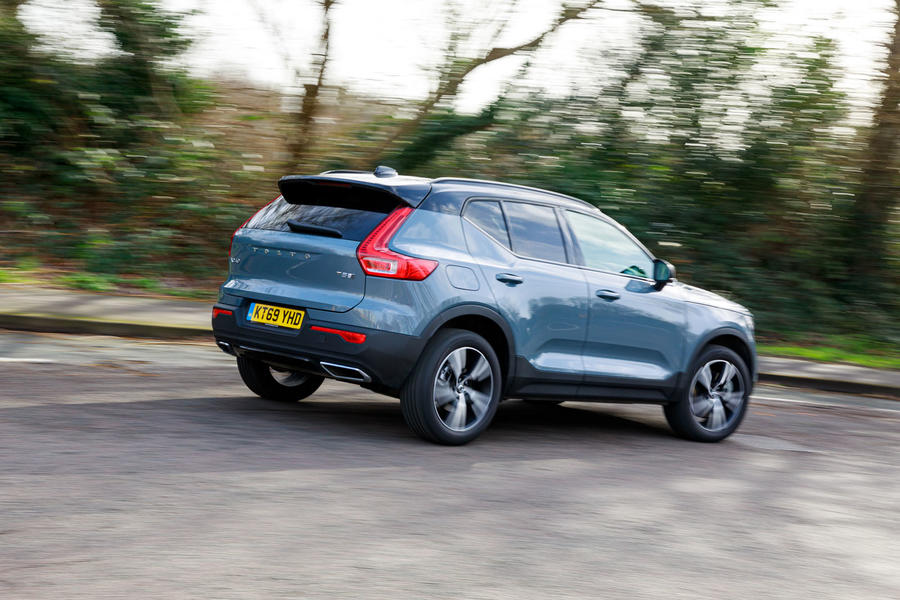 Past the points of potentially lower running costs and a cheaper company car tax rate, the XC40 PHEV still carries plenty of appeal as an ownership proposition. For starters, it looks as great as it always has, with the only real change to its suitably swish exterior being the addition of a charging port just over the front wheel arch.

The cabin continues to exude all of the lounge-like class that we so liked about the XC40 when it first arrived a few years ago. Even in the darker colour palette of our test car there’s an impressive sense of space in both the first and second rows, and an elevated level of material quality lends it plenty of upmarket appeal.

That said, the front seats err on the firm side, and their short squabs could provide a bit more in the way of under-leg support. But there’s plenty of adjustability to be found both here and in the steering column, the net result of which is that the XC40 is afforded an appealingly commanding and comfortable driving position with excellent visibility out of the cabin.

With its battery fully charged, the XC40’s crisp, clear digital dashboard informed us we had 21 miles of electric-only range rather than the 28 that Volvo claims. Nonetheless, driving the XC40 on battery power alone is a relaxing undertaking – if not a particularly rapid one. With only 118lb ft and all of that kerb weight to cart about, the electric motor isn’t the last word in accelerative potency but is responsive enough to your inputs and still capable of getting the Volvo up to speed in a timely enough fashion.

Brake pedal feel is as good as nonexistent, however, and the transition from electric to petrol power isn’t quite as smooth as you’d ideally like, particularly in those instances where you need to suddenly summon all of the car’s available shove at the drop of a hat. Hit the kickdown switch and there’s an extended delay as the petrol engine sparks up and the seven-speed transmission rifles around for a suitable gear, but once that has been found progress is swift.

The 1.5-litre three-cylinder petrol engine doesn’t sound too bad, either, and emits an intriguingly sporty warble under load.

Ride comfort could be better, though. Our R-Design test car rode on firmer sports suspension, so there was a brittle, slightly agitated edge to its ride in the low-speed environments you’d expect to use it most frequently. Of course, its vertical body movements felt well-checked when travelling at speed, but we’d be likely to sacrifice some of that control for an additional level of pliancy around town.

Still, its steering is nicely weighted and pleasingly direct, allowing you to guide the car through bends with reassuring levels of confidence. It’s hardly the sort of car that eggs you on to drive it hard and fast, but the accuracy of its steering remains easy to appreciate when you’re simply moseying around town. 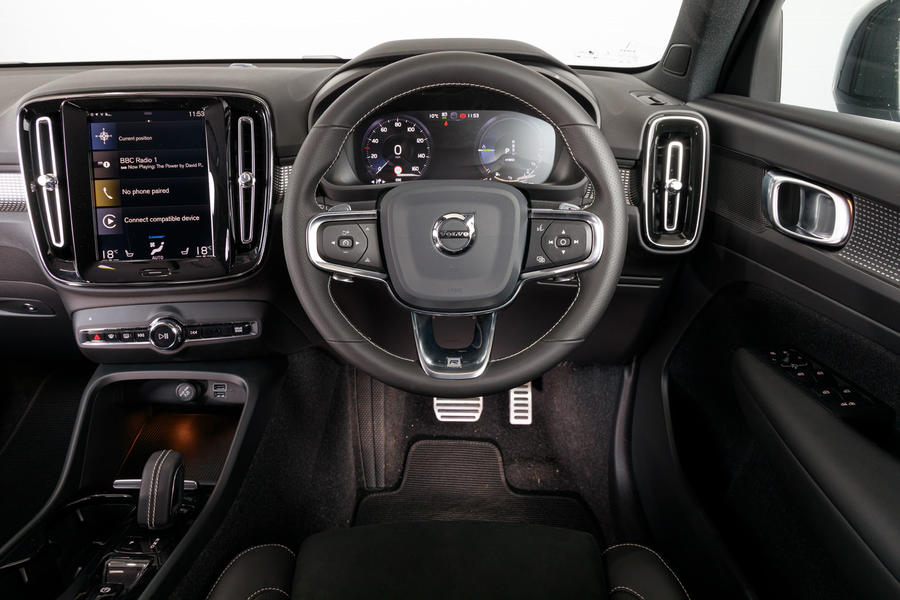 It's in town where the Volvo most feels in its element. Here you can take advantage of its limited electric-only range to bring running costs down, and probably improve greatly on the 45-50mpg average economy figure we saw during our time with the car.

It operates at its best within a fairly narrow window, then. But if it fits your usage patterns, there’s a lot going for this plug-in XC40. We’d just avoid the sports suspension. 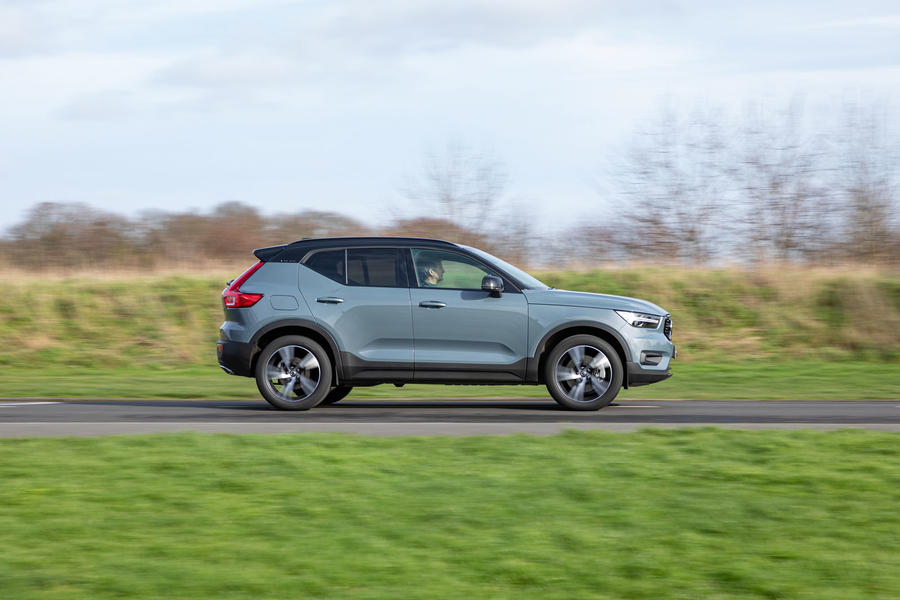 The BMW 225xe phev we have on lease has an EV range of 25 miles. This winter (Jan, Feb) it has been averaging 9-10 miles. So a new PHEV with only 28 miles wltp range just don't bother. Either get a PHEV with 50+ wltp range or preferably go fully EV. The car needs heating up, the battery needs heating up. It destroys the range of a small battery pack but on a larger pack it only consumes the same range. So a 50 mile Wltp range car might take a 15-20 mile hit in winter. Whereas a 25 mile Wltp takes a 15-16 mile range hit in winter.
Tom Chet 11 March 2020

...when you can get Skoda Superb Estate iV for £28k from Drive the Deal.

A three and half star rating

The much lauded XC40, reduced to the ordinary class, despite increased tech and hybridisation.

Perhaps the initial enthusiasm was OTT?

Personally I never rated it above the Audi Q2, BMW X2 which offer more conventional interiors but are better all round propositions.