With a long-rumoured (and heavily delayed) TVR revival on the cards, are the older ones now dinosaurs?
Open gallery
Close

To drive a TVR Griffith today is to experience that moment in your time machine when your hand slips on the lever and accidentally transports you back farther than you intended to go.

I know this car was built this century and, from its number plate, so do you. But that’s not how it feels. It doesn’t even feel like a child of the late 20th century, despite its design dating from the early 1990s. The ’80s? Nope. The ’70s, then? Try again. This car might have the look and performance of a reasonably recent sports car, but its heart and soul seem to have been wrought in the 1960s.

So why didn’t we say so at the time? Well, we all know humans who bear their years spectacularly well and those that do not, so why not cars? Truth is, the Griffith is no longer a snarling, edgy sports car with quasi-supercar performance. Now it’s just a nice old thing, a favourite uncle who’ll sit you down by the fire, hand you a glass of scotch and tell you how it used to be. 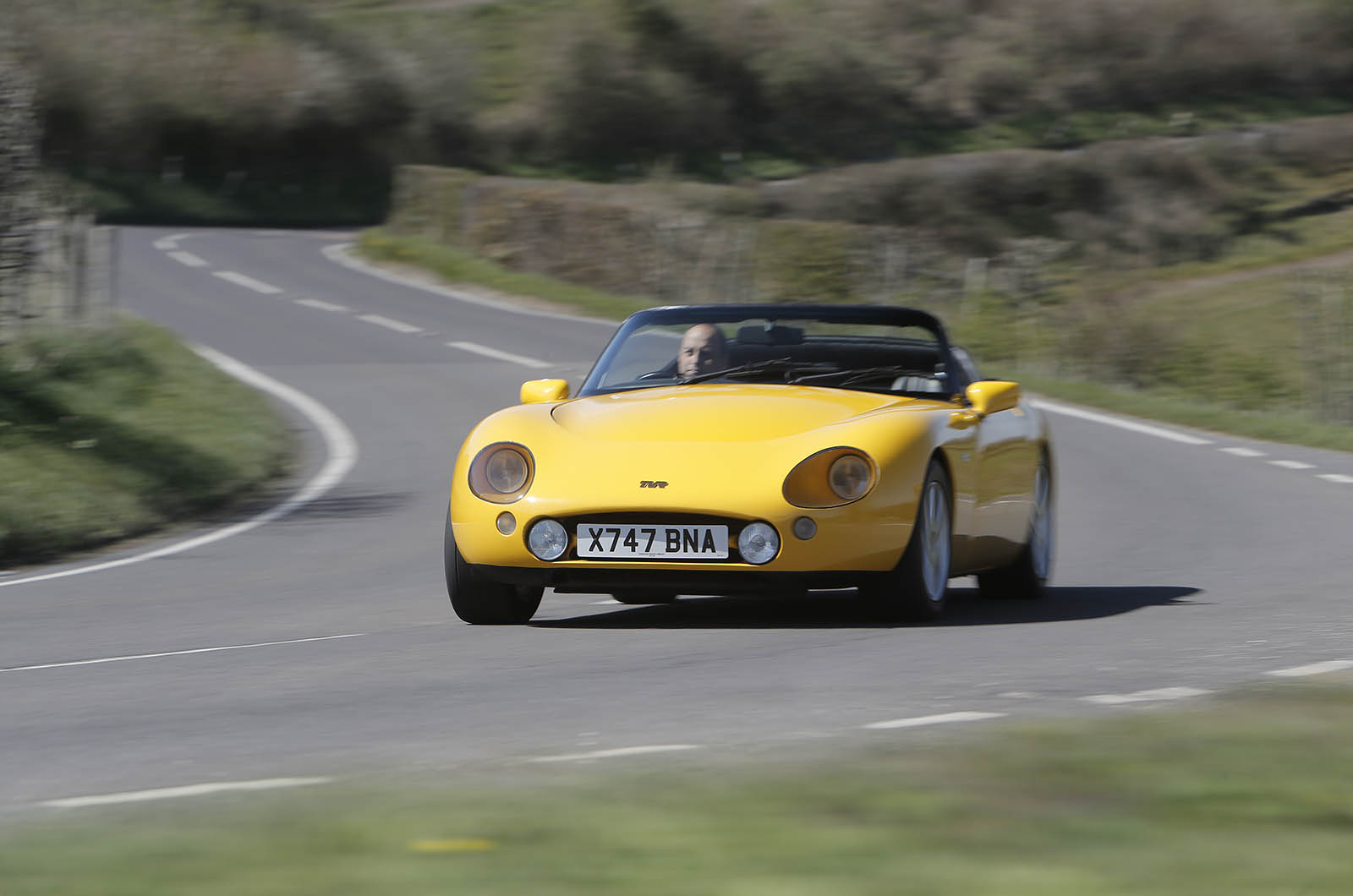 To me, at least, the fact that a Griffith feels like a 1960s throwback is a perhaps unexpected but nevertheless entirely welcome turn of events. Any car spared the slow slip into oblivion goes through a cycle that progresses roughly from new and desirable to secondhand and affordable, and then from pointless old shed to appreciated and appreciating classic. Cars need time for their inadequacies relative to modern machinery to count for less than that charm inherent in all old things of power and beauty that were desirable when they were new. And some need more time than others.

And whatever its failings, power and beauty the old Griffith can do. Indeed, it’s here to represent the very best of its brand – the car that best captures all that we’ve always wanted TVRs to be. Earlier cars were uglier, slower and less able; more modern ones were too truculent and difficult to drive and own. The Griffith was the high point, the ultimate development of the charmingly simple philosophy that had been core to the appeal of all TVRs made before it and which would forever after be eroded by the more exciting and dramatic but less reliable TVRs that followed.

If you want a 1960s analogy, Formula 1 cars reached that point in about 1967, when efforts to minimise drag resulted in the cleanest racing shapes of all time. But then designers realised the air was better exploited than avoided and things were never quite the same again.

What, then, do I recall? Certainly that the shape was at least in part the work of Iain Robertson; we used to work together on this magazine and did our first races in the communal office Caterham. His boy, Charlie, now does great things in sports cars, winning last year’s LMP3 title in a Ginetta shared with Sir Chris Hoy. 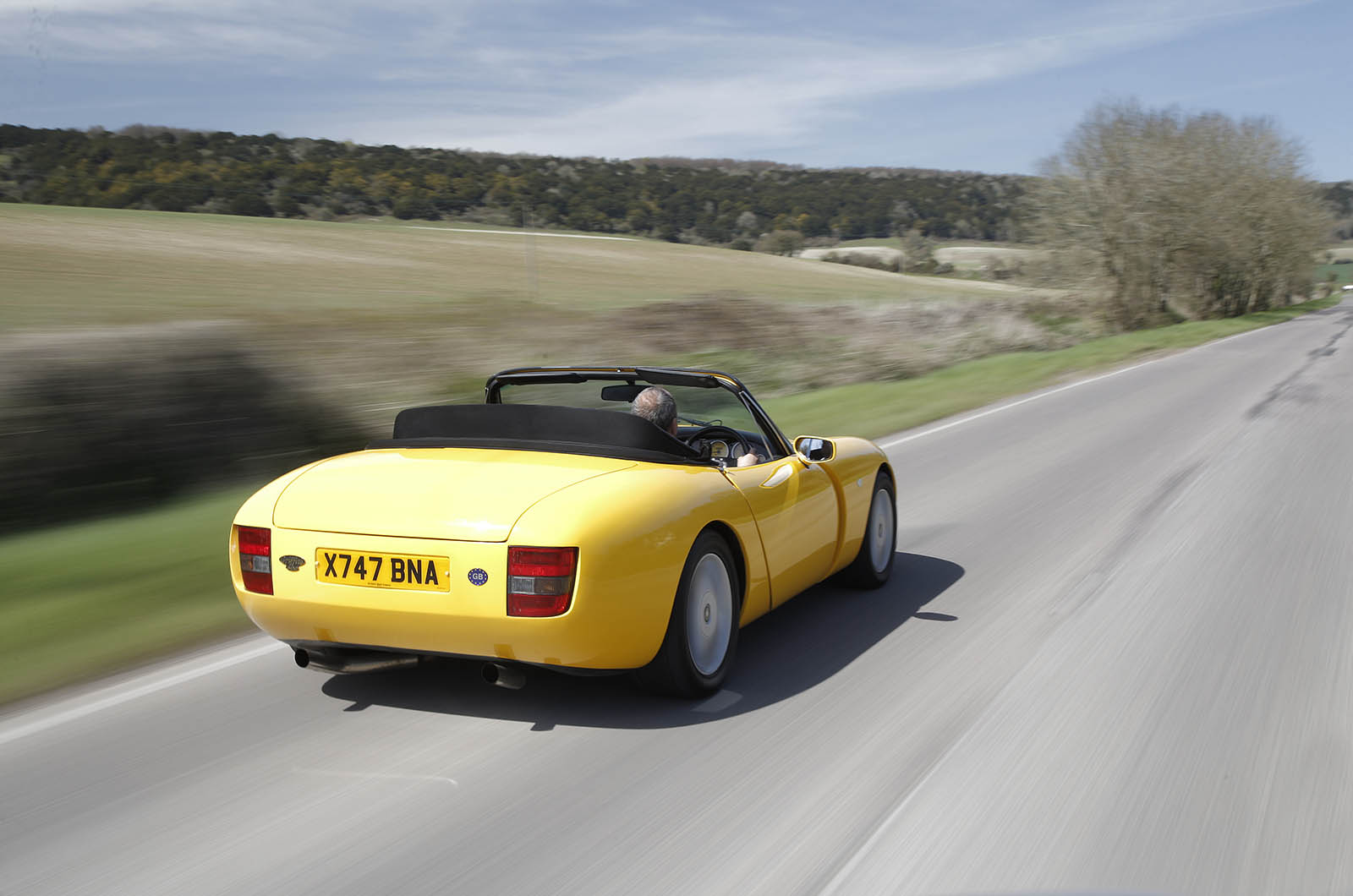 A rumour than can no longer be corroborated – because neither party is with us – is that at least one element of the car’s shape was down to Ned, the dog of TVR boss Peter Wheeler, who, for reasons best known to Ned, bit into a lump of clay and spat out a chunk of improbable aesthetic excellence. It’s probably untrue, but that means it’s possibly true, providing those fragments of hope to which I choose to cling.

And then there was the powertrain. I really wanted a precatalytic converter 4.3-litre car for this test, but at the time of looking there just weren’t any nice ones around. Their power – 285bhp – was nice, but they made the best noise of any Rover V8 I’ve ever heard.

Many Griffiths had standard 4.0-litre engines, which still provided decent performance for their 240bhp, but when I contacted Graham Munt, who has been selling TVRs at Fernhurst Motor Co in Surrey since 1983, he offered me this beautiful, 27,000-mile 5.0-litre Griffith 500 – and I was not about to say no.

The 500 turned out to be the ultimate Griff because, while plans to put TVR’s home-grown straight six engine under the bonnet didn’t quite come to nothing, by the time the car did come out, it was rather different and called a Tuscan. The 500’s engine makes 340bhp and a beautiful sound, albeit slightly sanitised by the presence of catalytic converters. The camshaft, which should be quite spiky, can go a little soft after many tens of thousands of miles, but otherwise, if accorded the courtesy of thorough routine maintenance, these engines are strong. So, too, are their mightily constructed Borg Warner gearboxes – although not the sweeter but more fragile Rover transmissions used by early Griffs.

You sit low in the car and try to refamiliarise yourself. This is one of TVR’s saner cabins, but you can still struggle with the basics, such as finding the door handle, which is actually on the transmission tunnel. The heating and ventilation and many unmarked buttons remain as mysteries to me to this day. The dials are hard to read and very yellow. The fit and finish would elicit gales of laughter and gasps of horror if tried today, but with the slightly baggy leather chair and off-the-peg steering wheel, it kind of fits the car’s bluecollar character. 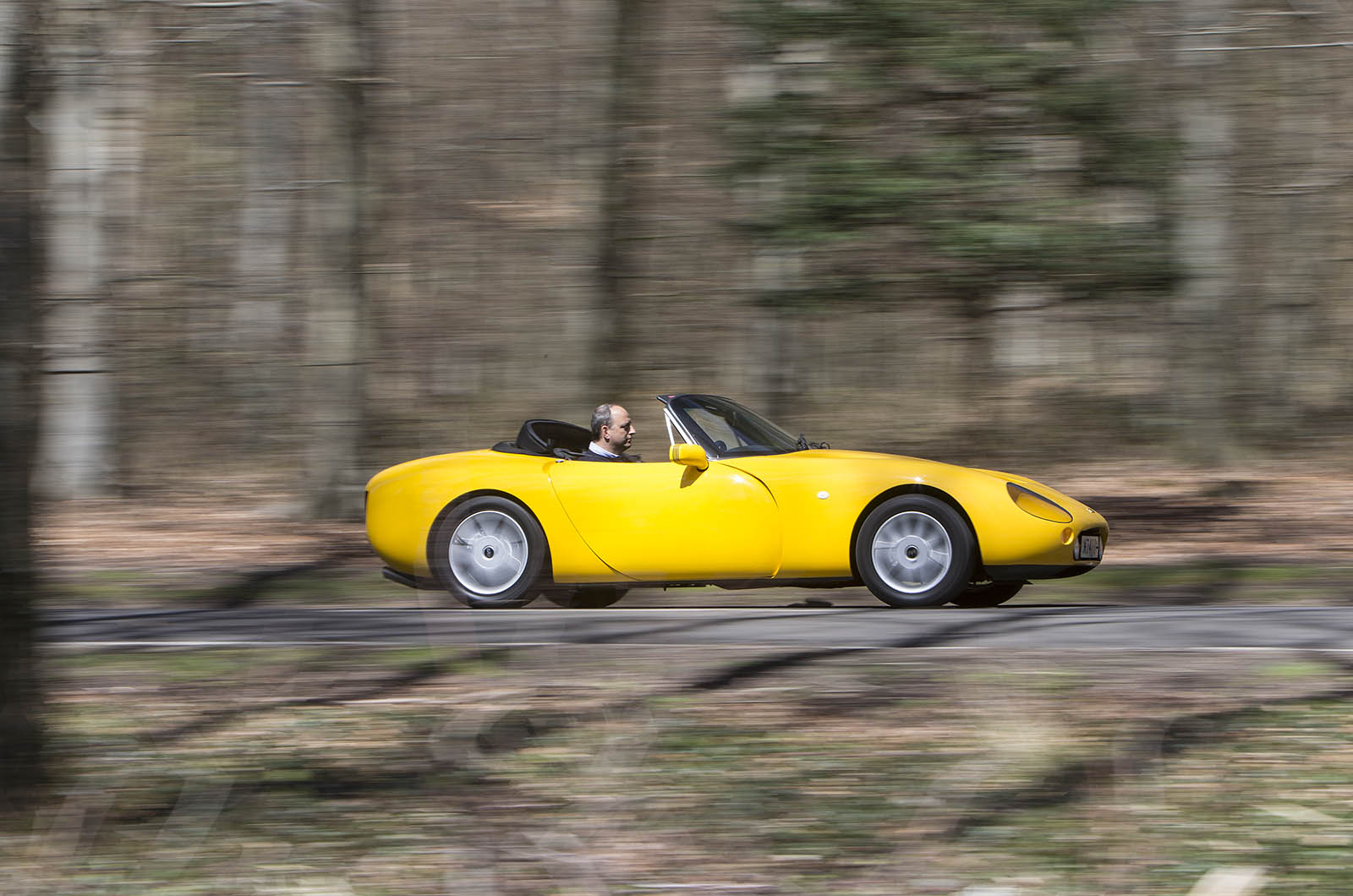 The engine doesn’t howl, growl, roar, thunder, scream, shriek or wail. It woofles. As you pull out onto the public road for the first time in such a car in very many years, all sorts of things occur, some as rekindled memories, others for the very first time. The speed of the steering is familiar. You get just one complete turn of the wheel in each direction, which I guess was done to make the car feel agile. But the softness of the ride is not so easily recalled. I know TVR always made its cars soft at the back in order to provide the traction required for decent – and all-important – 0-60mph times (4.1sec, as you’re asking), but this thing positively floats.

This should make the car feel horrible, but it doesn’t. Instead, it fits perfectly the surprisingly vintage narrative now emerging. It makes the car comfortable, switches your vision for it from an urge to go screaming around a race track to a desire simply to sit back, relax and watch the world go by, safe in the knowledge that if you do get held up, parked under your right foot there’s still 340bhp in a car weighing little more than a tonne. That should, in theory, make it Mercedes-AMG GT fast, but in reality it doesn’t feel close to that level.

TVR's 10 greatest hits - from Chimaera to the Tamora

The handling is more familiar. TVRs never understeered then, and it’s a script to which this one doggedly sticks. At first it almost turns in too well, but once you get used to the speed of the steering, you can guide it smoothly enough. There’s less grip than I remember, but I don’t know the age of the Toyos on this car, and when it does go, it’s always at the back. But it feels too soft to be a drift car, even with its standard Salisbury limited-slip diff, so if it’s going to break away unexpectedly, it’ll more likely be while cornering at higher speeds over a crest. It’s an interesting characteristic, but nothing worth panicking over. But it reminded me why, back in the days when I’d drive anywhere to drive anything around any track, TVRs were usually notable only by their absence. A standard Griffith would make a rubbish track day car, but that’s precisely why it’s such an engaging road tool today. It has a gait, a state almost of repose, that I found utterly endearing.

It’s practical, too, with a big boot and a brilliantly simple targa roof. It would be a fine companion on a summer’s touring holiday. And no, I don’t think you’d have to factor in a stint on the back of a lorry, provided the car had been looked after; the fundamentals are strong and everything that was going to fall off would have done so long ago.

So don’t think of the Griffith as a rather more spacious, less competent alternative to a Lotus Elise or similar. More than anything, it struck me as a more modern interpretation of those great six-cylinder Austin Healeys of the 1960s, making up in looks, sound and pure character what it unquestionably lacks in ultimate dynamic ability. It’s a very different sort of driving pleasure, but for those of us now inured to the quasicompetition car feel of hardcore modern sports cars, it’s all the more enjoyable as a result.

This article was originally published on 29 January 2017. We're revisiting some of Autocar's most popular features to provide engaging content during these challenging times.

Rose tinted glasses on in spring 2020.   Lovely shape still, will never age, the interior is glorious too.   Little things like no rear number plate surround.

And that engine also, just a simple V8 lump woofling.   It's been a lovely week in SE England, I would love to be on my own driving around the countryside in it.

A dark red one for me and the Lake District,  like Peter Tomlinson drove all those years back when they first came out, I believe working for Performance Car.  I loved reading about it then and all these years later what an epi retelling of Andrew's drive from 2017.

Some things in the past actually were better

Just look at the pure, smooth lines of this classic sportscar. It's delicious. Most of today's cars are too fussy and grossly over-styled and over-detailed, with lines and creases and vents and fake vents and plastic vent surrounds and more creases and fake diffusers and massive plastic front foglight surrounds and intricately sculpted bumper panels and more creases and uselessly small rear side windows and yet more creases. They're more like origami than cars, and certainly not pretty. It's sickening.
289 27 March 2020

I am absolutely with you on this bowers!

Yep, the Grif has still got it

The most beautiful affordable car I can think of from any generation. As a kid I remember daydreaming that as a grownup I'd drive one to the south of France. Reading this now, in this most peculiar of times, made me quite emotional.

So true; recurring themes in these reassessments of older machinery invariably concern good ride quality and narrowness, and as to how beneficial these qualities are. To that, although not relevant in this instance, you could add all-round visibility. Why won't manufacturers take note? Love the Griffith but sadly out of my reach. Enjoyable article Mr Frankel.
BOOSTFAN 2 February 2017

Bought a brand new Griff 500 in 98. It was our dream car.We went to the factory twice to see it being built. But after 2 years of grief including several breakdowns & a full glass out re-spray we had had enough. Sold it after 2 years & lost 12K.
I still fondly remember the trip to Zolder with the West Yorks TVR club, great fun despite the car using a litre of oil every 600 miles!!
Maybe I should have just put it in a garage & forgot about it for 20 years.It would have probably been a good investment.
View all comments (5)