Tesla has chosen London to receive the first batch of its new, faster V3 Superchargers outside of North America, which are expected to serve more than twice the number of customers per hour than V2 chargers.

Eight examples of the upgraded Superchargers have been introduced to its service centre in Park Royal, creating the company’s 500th Supercharger station in Europe. This new station also has eight V2 Superchargers, whose peak power has recently been increased by 30kW for a total of 150kW.

The V3 Superchargers generate a peak power of 250kW, which Tesla claims will allow a Model 3 to regain 75 miles of charge in five minutes. Charging rates of up to 1000 miles per hour are promised, while power sharing – where multiple cars share the same circuit – will be eliminated, thus no longer diminishing charging speeds.

The V3 has an entirely new architecture from the V2, with a 1MW power cabinet. Tesla estimates the new V3s will charge its vehicles twice as quickly as the previous version, dropping the time owners spend on charge to an average of 15 minutes. 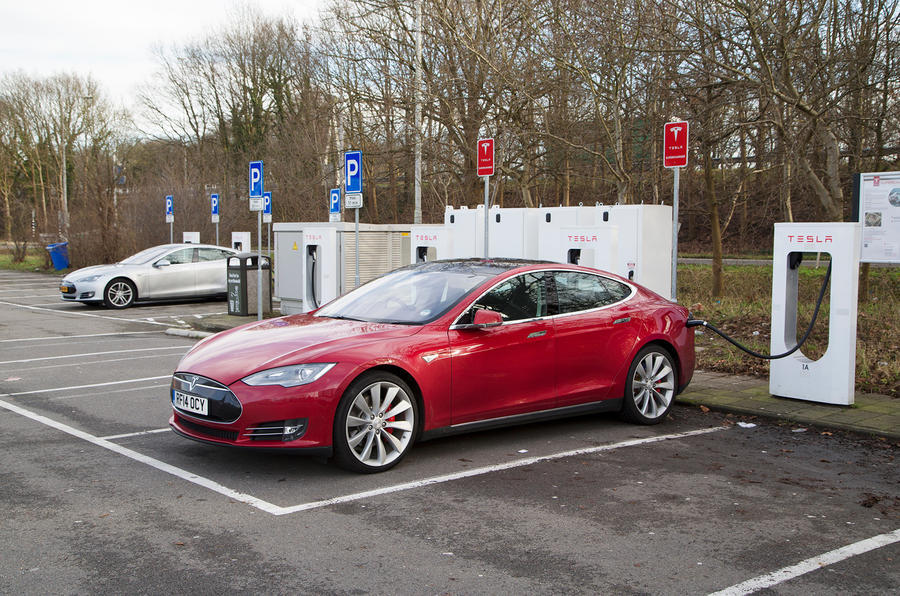 This faster charge time is also enabled by a new feature called On-Route Battery Charging, which heats the batteries when travelling to a station, so that they are at ideal charging temperature on arrival.

Tesla intends to add further V3 Superchargers across Europe, simultaneously adding them in Asia. It recently started constructing its first V3 Supercharger station in China, located at Shanghai Jinqiao Tesla. This is scheduled to open next year.

New Tesla Supercharger can give 1000 miles of charge per hour

A day in the life of a Tesla supercharger

is there anything about it that you kinda wish was different? i'm not being cheeky or sarcastic, it's a genuine question. Or, to put it another way, have you found yourself in a different car and felt a bit "ooooo i've missed that!" ?

is there anything about it that you kinda wish was different? i'm not being cheeky or sarcastic, it's a genuine question. Or, to put it another way, have you found yourself in a different car and felt a bit "ooooo i've missed that!" ?

I use an Audi A2 bought to cover me if I had range anxiety. It didn't move until today when I didn't want to load a Christmas tree in the new car. A 160 mile day on Thursday was unusual, but coped with 40 miles to spare.

Wiper controls would be better on left hand stalk instead of screen - the push button on end of the stalk could be used to change speed for example. I'll suggest to Tesla that when wipers are switched on that the submenu with speed settings remains visible all the time. It's software, so could be an over the air update.

Passengers are initially confused by exterior door handles. I don't mind as they look good in my eyes.

A few more handover points in Scotland, Aberdeen to Edinburgh a pain.

I might miss changing gear eventually. Had autos and manuals over the years - I've missed the manual's occasionally.

Public charger system in Scotland is free, but App is buggy and doesn't always switch them on. Cured by getting an RFID card at £20 a year. Put an umbrella in the boot a la Rolls Royce - if public charger needs faffed with you get wet. Pod-Point at home, and public ones work seamlessly, only used Tesla Supercharger once and it was seamless too.

Finally, a warning about overtaking on single A roads. The instant response caught me out twice at the start as the gap to the car in front disappears more quickly than you expect. You soon get used to that.

Otherwise fabulous , a game changer, and I'm a real petrolhead. If you test one,unless you're coming out of 300 bhp+ I'd say you'd be surprised by how quick, instant and smooth it is.

75 miles in 5 mins is right there for practicality. Less than 5 min charge for my daily commute - how could that possibly be inconvenient even vs fossil fuel?

I've had my Model 3 for two weeks now. Daily commute about 60 miles. Plugs in for about 2.5 hours at public charger 10 mins walk from work to top up and free. Have same speed with home charger that was £60 installed after subsidies. Free local fast chargers within 10 mins of my home, adds about 130 mph charge rate if I keep it below 90% full (charging slows down a lot above 90% full). 803 miles so far and £8.50 of electricity, including £6 at a Tesla Supercharger just to try it.

Only downside so far is having to think differently about your journeys vs petrol and plan ahead a bit, say two days in advance. Range anxiety lasted three days, real range is 170 to 200 miles - and I've been addicted to the acceleration, and using it to the full. Quite honesty a complete game changer for the way I use a car, and if reliable, etc I won't go back to petrol - smooth, fast, quiet, relaxing, and full of toys. Almost a no brainer while you can easily get free charging publicly, which won't last too many years before tax realities will bite of course.

Go away you sad, nasty individual.