BACK TO ALL NEWS
Currently reading: Nissan-Suzuki city car deal secure
UP NEXT
New Hyundai Bayon to launch in 2021 as entry-level crossover

Nissan doesn’t expect Volkswagen’s buy-in at Suzuki to affect its own deal with the Japanese firm over production of the Pixo.

The Pixo – a rebadged Alto – is built at Suzuki’s plant in India. But Nissan COO Toshiyuki Shiga told Autocar: “Suzuki and Nissan have done a lot of business for many years. As far as we are concerned, nothing changes.”

The latter comment has sparked speculation that the VW Group could be considering building two-wheeled vehicles to accompany its burgeoning range of cars, vans and trucks.

VW Group chief Martin Winterkorn said that VW and Suzuki are planning to work on joint projects. "We have set up a joint project office in Wolfsburg to coordinate cooperation," he said. "Work on concrete ideas and vehicle projects will begin in the coming weeks." 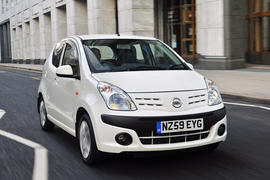 LP in Brighton wrote:
But what about the future of the Vauxhall Agila? Vauxhall is known to be working on its own small car - will this replace the Agila, or slot in between the Suzuki-built model and the Corsa.

I presume they can just base it on the Chevrolet Spark, because the small Vauxhall which has appeared in teaser shots looks suspiciously like its Chevrolet cousin. It would seem more sensible since the Agila seems less popular than the Suzuki Splash, or at least I've hardly seen any Agilas going about. It also keeps development in-house and will help keep volumes at a viable level.
LP in Brighton 13 September 2010

But what about the future of the Vauxhall Agila? Vauxhall is known to be working on its own small car - will this replace the Agila, or slot in between the Suzuki-built model and the Corsa. Small cars need big volumes to be viable, so I imagine this deal will also continue.