Nissan Micra to get Propilot autonomous tech ‘within 10 years’

Nissan’s base model will inherit systems by 2026; Qashqai gets it first, Leaf is most likely second candidate
Share
Close
Share story

The Nissan Micra will come with an advanced Propilot autonomous system in less than 10 years, according to one of the brand’s autonomous drive bosses, Stewart Callegari.

Callegari said that following Propilot’s introduction to the UK market in the 2017 Qashqai, it would take “less than a decade” for it to trickle down into the Micra, meaning a sub-£10,000 car could feature this type of technology before 2026.

“Currently, the B-segment is still predominantly a three-pedal [manual gearbox] market, and it’s very much price driven,” explained Callegari. “But we expect that to change, and when it does Propilot will become appropriate.”

Nissan and its partner Renault are due to launch 10 autonomous-able cars by 2020. The Japanese brand won’t confirm what model will get Propilot technology after the Qashqai, but Autocar sources are confident the all-electric Leaf, which is due to be replaced in 2018, is the most likely next candidate.

While he admits there’s also potential for Nissan’s performance models to gain autonomous technology, Callegari was quick to emphasise that it’s less of a priority in cars like the 370Z and GT-R.

“Nissan still believes driver engagement is key, especially in the performance models,” he said. “Europe and the UK, in particular, is a good example, as customers still want to be in control of their cars. People still love driving here.”

Callegari believes autonomous systems should therefore only be introduced where customers will regularly use them. He admits that GT-R and Z models are likely to get some form of the technology, but that in the foreseeable future the priority lies with introducing Propilot to more appropriate models.

When asked why Nissan has been able to introduce autonomous technology into its cars before Renault, with whom it shares much tech, Callegari said it was to do with Nissan’s heritage.

“We’ve been working on autonomous technology since the 1990s, when we introduced the intelligent cruise control to the Primera,” he explained. “Nissan has lots of experience in this area. Renault will get it soon, but I think you’ll see competitors following Nissan’s lead, like they did with the Qashqai.”

Callegari was making reference to the Qashqai’s position as the world’s first mass-produced crossover. He believes that, much in the same way the car market has become crossover dominated, it will soon be commonplace for autonomous systems to be offered on less premium models. 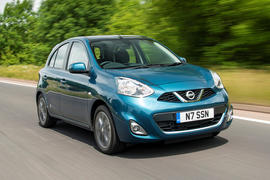