UK insurance body Thatcham is calling for a standardised warning light for all cars fitted with advanced driver assistance systems (ADAS) to alert drivers when they are not working correctly.

The systems – which include autonomous emergency braking, adaptive cruise control and collision avoidance – generally do not issue warnings if they malfunction, leaving drivers unaware.

Thatcham’s chief technical officer, Richard Billyeald, said he was lobbying manufacturers to fit a uniform signal to flag up faults with any such system.

“What we’re asking for is a standardised warning light,” he said, “so that, for whatever reason, if any sort of ADAS system has reduced performance or functionality… there is a light – like you would get if your ABS or your airbag had a problem – that says ‘go and get it looked at’.”

The systems typically rely on radar and lidar scanners and sensors, usually housed in the vehicle’s bumpers and behind the windscreen. It is possible to knock them out of alignment, and repairs and recalibrations can be difficult to diagnose and execute. 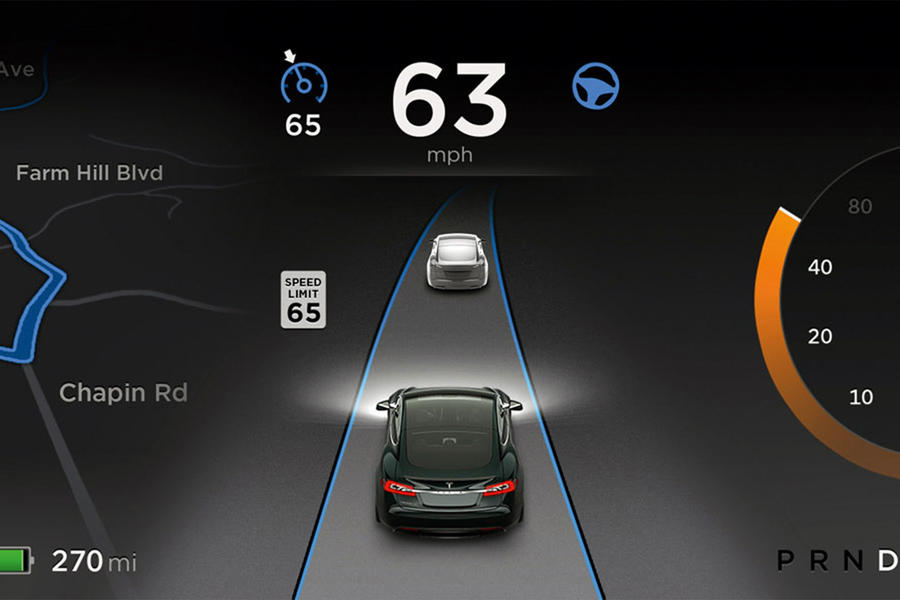 “Say you park your car in Tesco car park and someone reverses into it,” said Pete Eden, national business process and technical manager at the National Body Repair Association. “If they can’t see any damage because the bumper’s gone in then sprung back out again – because that’s what they’re designed to do – there might be a radar or a lidar behind it that’s been pushed or the bracket has been bent.

“That lidar reads 100 yards away and it has only got to be a degree or two out and, all of a sudden, it’s reading the road six feet in front of the car – and you wouldn’t know.”

He added that simple body repairs and even certain types of metallic paint could be enough to corrupt a system. “The bumper acts as a refractor for the signal – like a satellite dish. It [the signal] hits the bumper and it’s thrown out at 45 degrees but, if the bumper has a load of filler in it, the signal can’t get through,” said Eden.

“The metal content [of certain paints] doesn’t allow the signal to refract. Gold is the most well known for it because of its high metallic presence and, if a car has just had another coat of paint, the signal might not get back because there’s too much paint on the bumper.”

The systems represent a grey area for insurers, both regarding sufficient repair standards and, if they are not working, establishing fault after an accident. Billyeald said Thatcham would imminently release a publication clarifying the insurance industry’s requirements around repairs, which follows its launch of an ADAS calibration training course for vehicle technicians in October 2019.

“This year, we’ll be releasing what we’re calling the UK Insurance Requirement for the Safe Repair of Vehicles with ADAS,” he said.

“We’ve come up with a set of requirements and, rather than trying to get it written into legislation, it’s a reasonably simple route for insurers to say ‘this is what we want to see’ with repairs.”

Much of this driver assistance tech seems to me to be complicated and unnecessary. Who is actually asking for features like lane keep assist? If you ask me the big German tier 1 suppliers have done a brilliant job of selling the automotive industry something unnecessary and then lobbying the legislators to mandate it. What a business model!
Deputy 9 March 2020

Cars already do warn you though?

I have regular access to 3 cars with adaptive cruise, lane assist, emergency brake etc.  All 3 makes (VW/BMW/Tesla) do self diagnostic and tell you if they aren't operational.  The VW front assist light came on recently when driving in snow (covered the sensor).  The BMW has a heated sensor though!! This is Thatcham trying to make more money buy offering a 'Thatcham Approved' stamp - for a cost.......

I don't have a car with all that stuff but that's not the point, the point is that some young whipper snapper(s) is/are going to just pull out in front of you (or whatever ) and colide because they no longer use mirror, signal, manouvre..position, speed, look (already sounds old fashioned doesn't it) and just pulls out and the system doesn't respond either because it is broken or it just failed to "see" the problem, this will become an increasing problem as more new drivers enter the system.

I don't have a car with all that stuff but that's not the point, the point is that some young whipper snapper(s) is/are going to just pull out in front of you (or whatever ) and colide because they no longer use mirror, signal, manouvre..position, speed, look (already sounds old fashioned doesn't it) and just pulls out and the system doesn't respond either because it is broken or it just failed to "see" the problem, this will become an increasing problem as more new drivers enter the system.

What are you talking about ? It aint just young people that "no longer use mirror, signal, manouvre..position, speed, look" its most people, of all ages.