BACK TO ALL NEWS
Currently reading: Bloodhound wants electric power for its 600bhp fuel pump
UP NEXT
How the Bugatti Chiron became the first 300mph road car

Bloodhound, the British 1000mph jet and rocket-powered land speed record challenger, is planning to convert at least one of its most important functions to electric power – if a suitable technical partner can be found.

The project’s technical director, Mark Chapman, announced a plan to use a 600bhp electric motor to power Bloodhound’s all-important fuel pump, whose job is to deliver one tonne of peroxide catalyst to Bloodhound’s Nammo rocket motors in the 18 seconds it takes for a 1000mph record run. At present, the car has a supercharged Jaguar V8 to pump fuel, but Chapman believes electric power would provide much greater packaging flexibility.

One possible partner could be Chinese car company Geely, an existing Bloodhound sponsor, which owns the Swedish Volvo brand and recently announced a 600bhp electrified powertrain for its Polestar performance offshoot. Talks are proceeding, said Chapman. 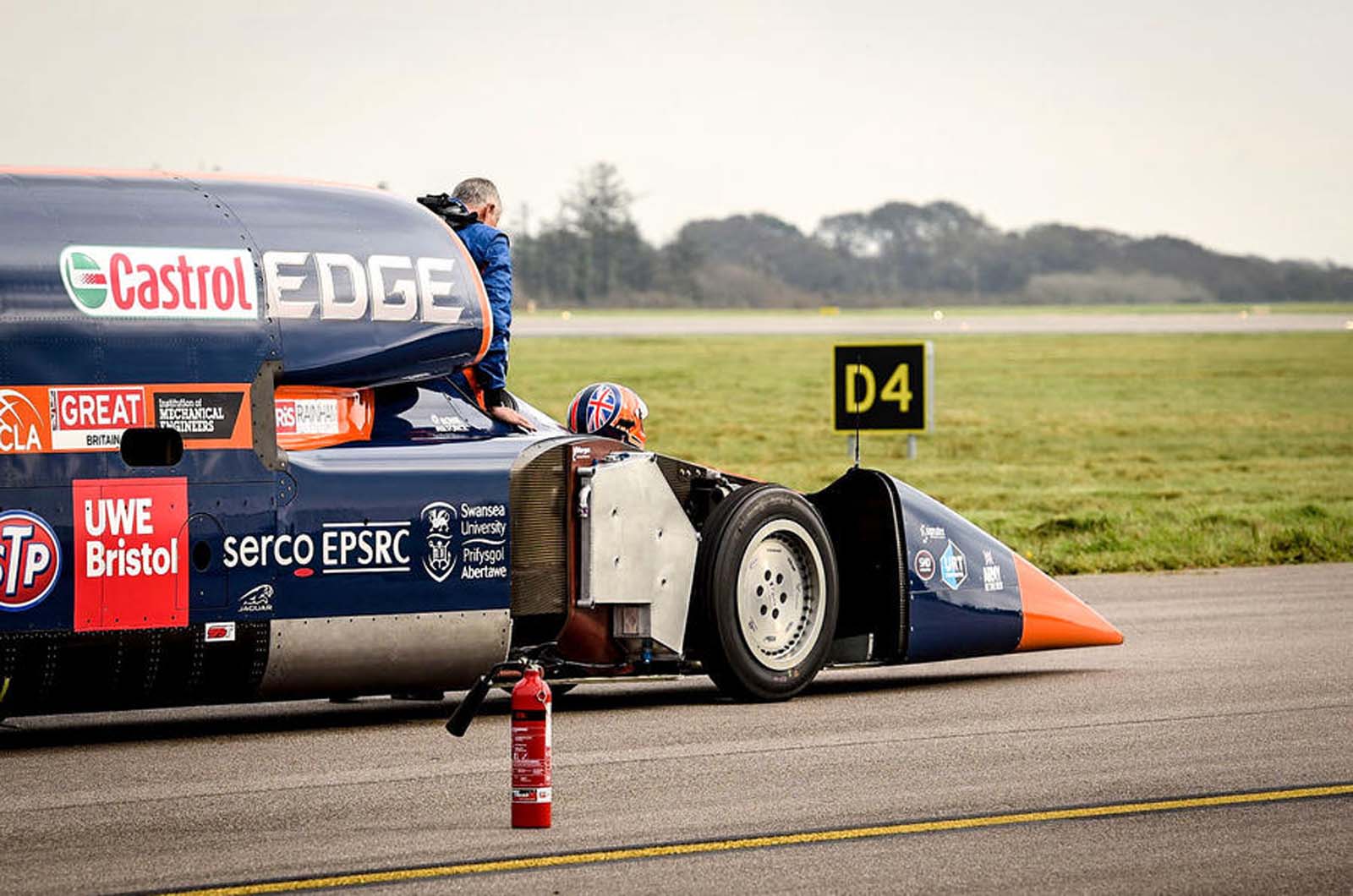 In late October, Bloodhound cleared the first of many performance hurdles by completing 200mph test runs on the 1.2-mile runway at Cornwall Airport, Newquay.

The first day’s shakedown, conducted on the ninth anniversary of the project’s inauguration, consisted of two noisy and spectacular runs at 202mph and 210mph in full view of sponsors, supporters and press. At the wheel was Wing Commander Andy Green, already the world’s fastest man, having set the world’s first and only supersonic record of 763.035mph on the Black Rock desert, Nevada, in Bloodhound’s predecessor, Thrust SSC, 20 years ago.

The Bloodhound project’s director, Richard Noble, himself a former land speed record holder, gave further details of Bloodhound’s record-breaking timetable as it moves towards 1000mph, a speed he describes as “the limit of current technical capability”. The car will run “very fast” next year, probably to about 650mph on jet power alone, then will attempt to better Green’s existing record in 2019, and, if successful, will bid for the full 1000mph in 2020.

Bloodhound insiders aren’t yet saying where next year’s “fast” runs will take place. Their preference is for the specially prepared 12-mile track at Hakskeenpan, South Africa, but weather (and possibly the demands of sponsorship) may see the car run elsewhere in the world.

An obvious possibility could be Black Rock, which the team knows well, but it’s even conceivable that a Chinese venue might be found.

However, the record runs will take place at Hakskeenpan, where the Bloodhound crew employed local workers for three years, clearing 8000 truckloads of small stones from its almost geometrically flat surface, entirely by hand, to make a track 12.4 miles long and 0.6 miles wide. The work greatly reduced local unemployment, brought a new water supply to the region and spurred a brand new motoring event called Kalahari Speed Week. As well as successfully completing their first shakedown runs, the Bloodhound crew has also announced four new sponsors: Belstaff (a clothing company); Renishaw (an engineeringgroup that has already made Bloodhound’s printed titanium steering wheel); Cooper Tires; and Oracle, an IT and telecoms group that already handles much of Bloodhound’s comprehensive telemetry and global communications.

The Bloodhound project has so far spent around £30 million establishing its Bristol base, building the car and preparing the Hakskeen track.

Team leaders estimate they’ll need as much again but are at last confident of raising it. “This whole project has flipped,” says Noble. “We’ve struggled for years to attract enough sponsors, but now we’re getting lots of serious enquiries. People realise we’re the perfect way of spreading a global message.”

How to (almost) break the UK land speed record

As far as I can recall, the thought process about battery power is simply becasue it allows better weight distribution - the batteries can be anywhere in the care whereas the ICE has to be mounted pretty close to the pump - moving further away could cause problems with the drive shaft.

When the project was initially launced, 600hp electric motors wern't available (although I think they were on the wish list) so they were going to use a Cosworth engine but Cosworth dropped out of F1 (I think) and so wouild have been unable to move forwards with the project so Jaguar came forwards.

Now it seems a 600hp electric motor is available and so they can go back to the "ideal" option and use the batteries to better distribute weight.

The other benefit of an electric motor is not having to worry about an air iintake for the ICE and this is better for airflow and streamlining.

Because the project was launched over 9 years ago, and so far they've managed to achieve just 200 of the 1000mph target. I doubt they'll do it - I'd like them to succeed, not least because my name is going to be on the cars fin, but I think it's looking less and less likely. If they don't get a move on Andy is going to be too old, or the other tech on the car is just going to become obsolete. How long before the new Messiah, Mr Musk, puts some of his batteries and motors into a streamliner and has a pop at it himself?

I would be wary of being a

I would be wary of being a sponsor. There is a good chance this will end in a fatality which is not the best PR for your brand.

After all the fanfare now these folks are saying we are dropping one partner because the chinese partners are willing to pay more! Its fair game I suppose, JLR should simply back out of the attempt and ask for their money back. Because if all they needed was electric propulsion, it's something Jaguar knows having a Formula E team and an electric car nearing launch.