How to (almost) break the UK land speed record

Despite having limited resources and ‘technology from the 1950s’, a group of keen volunteers almost succeeded in the feat
Close

He wasn’t alone. Thousands of other youngsters followed suit when their record-breaking hero, Donald Campbell, died as his Bluebird K7 hydroplane plunged into the depths of Coniston Water during an attempt on the world water speed record.

Far from being put off, however, David Tremayne – that teenager in the capital – was inspired and promised himself that one day, no matter what, he too would become a record breaker. Half a century later, on 18 August 2017, Tremayne remembers that promise as he straps into his Team Duo Stay Gold gas turbine-powered car. He’s attempting to break the UK land speed record of 301.67mph. It is the culmination of years of struggle and planning, including searching for the right engine, the right car and enough funding. He’s backed by an equally dedicated nine-strong team that includes sons Tom and Sam, but money is always tight. “We’re a bunch of shoestring boys,” he laughs, “the absolute opposite end of the spectrum to Bloodhound SSC.”

With Stay Gold lined up on Elvington Airfield’s 3000-metre runway and the starter plugged in, the jet engine whirs, igniters crackle, the engine fires and Tremayne scans the instruments. The jet pipe temperature peaks at 1000deg C then settles to 650deg C, as it should. The engine idles at 40%, Tremayne’s left foot is on the dead man’s pedal and his right foot is hard on the brake. The fuel valve on the right of the cockpit is set to fully open and the throttle to closed. 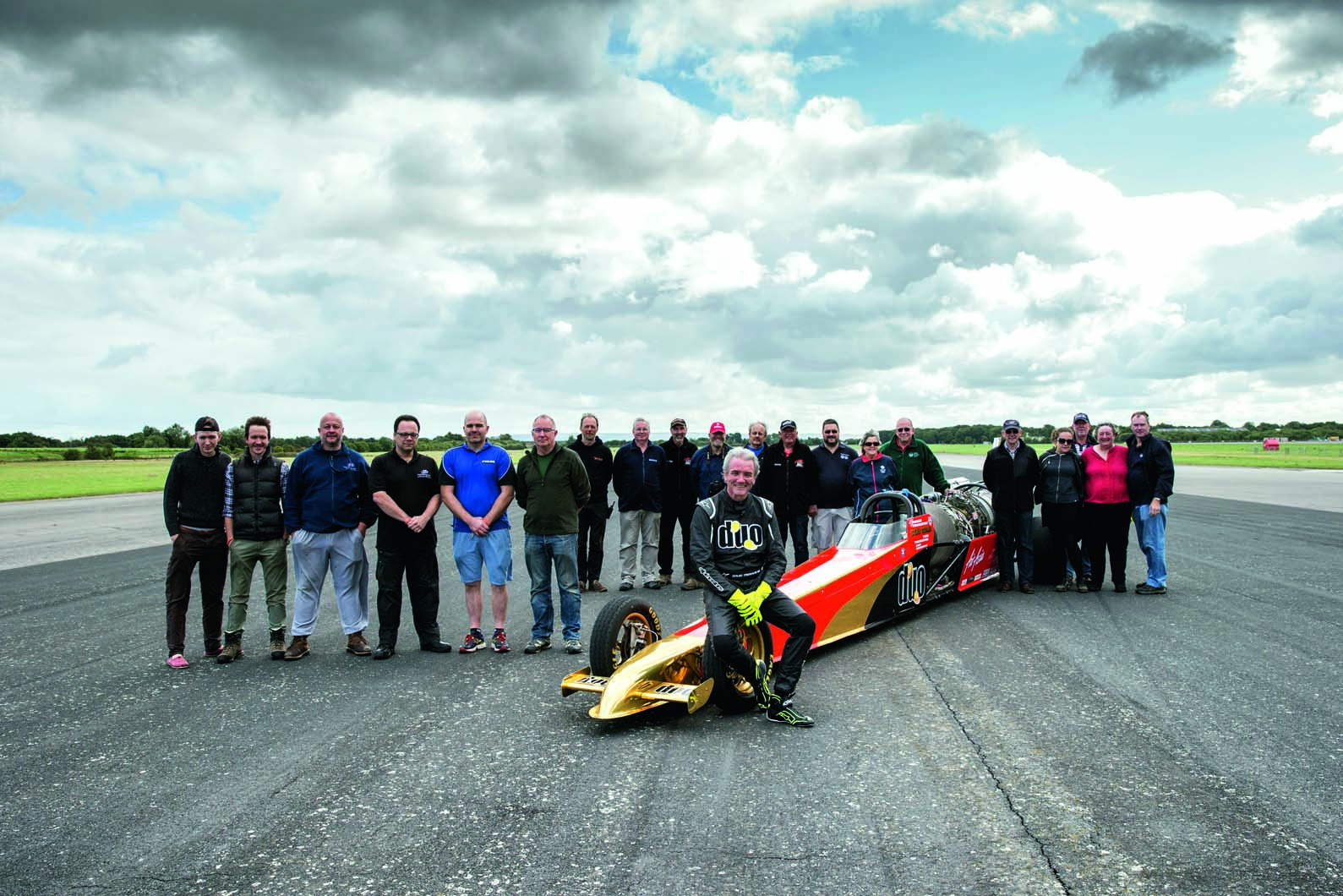 Tremayne eases the throttle lever forward to spool the engine up to 100% without the afterburner, the noise increases, everybody moves back and he is given the signal to start. Tremayne looks towards a red light 2000 metres away, his focus point to keep him on track, holds down the ‘hot shot’ button, then fires the reheat to unleash the engine’s full 4000lb of thrust.

It’s the first time the team has managed to get the engine running with full reheat. On the first short run at Cotswold Airport in 2012, Tremayne hit 205.22mph before the ancient Rolls-Royce Viper 520 engine failed with a seized rear bearing. In 2013, the team bought two Viper 601s as replacements, but both were unusable, then acquired the current Viper 535. That also had a technical problem and refused to run above idle, but the real problem has been finding someone with the knowledge to fix it. 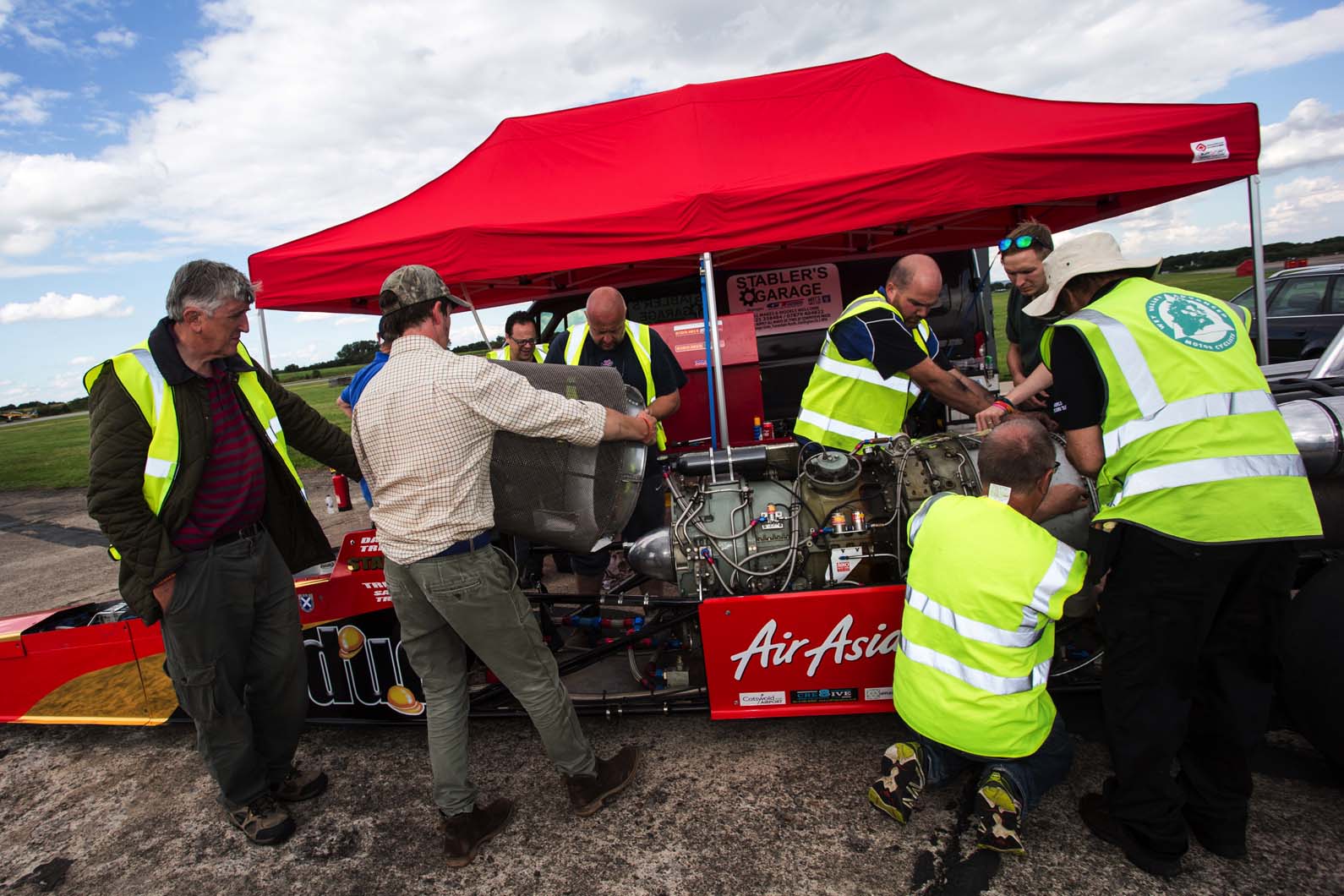 “Team members are all volunteers and we all have busy lives,” Tremayne later recalls. “Plus, we are dealing with technology from the 1950s and there’s nobody left from that period who knows anything about these powerplants.” Nobody, that is, until Tremayne talked to Bill Smith who, with his own Bluebird Project team, was responsible for recovering Campbell’s Bluebird K7 from its resting place in Coniston Water and restoring it.

“We were dying on our feet at the beginning of 2016 with nowhere to go,” says Tremayne. “Then Bill and his team went through the whole system and discovered a simple washer missing from the fuel pump.” With the washer replaced, the engine was tested on 4 January this year, the 50th anniversary of Campbell’s accident. The power rose beyond 50% for the first time, first to 93% and then, the next day, to 102%, before the pressurised front fuel tank split. Once that was repaired, the team made plans for a serious record attempt and the date was set for 17 August. Then, at a final test of the reheat at Carlisle Airport on 9 August, they found the engine had seized. A panel inside the jet pipe was fouling the turbine but, once freed, the engine seemed to run perfectly.

The following week, the team assembled at Elvington with the UK Timing Association. Tremayne strapped in to the cockpit for his first attempt. “It didn’t go well,” he recalls. “I managed 206mph, so in five years we’d improved by 1mph.” 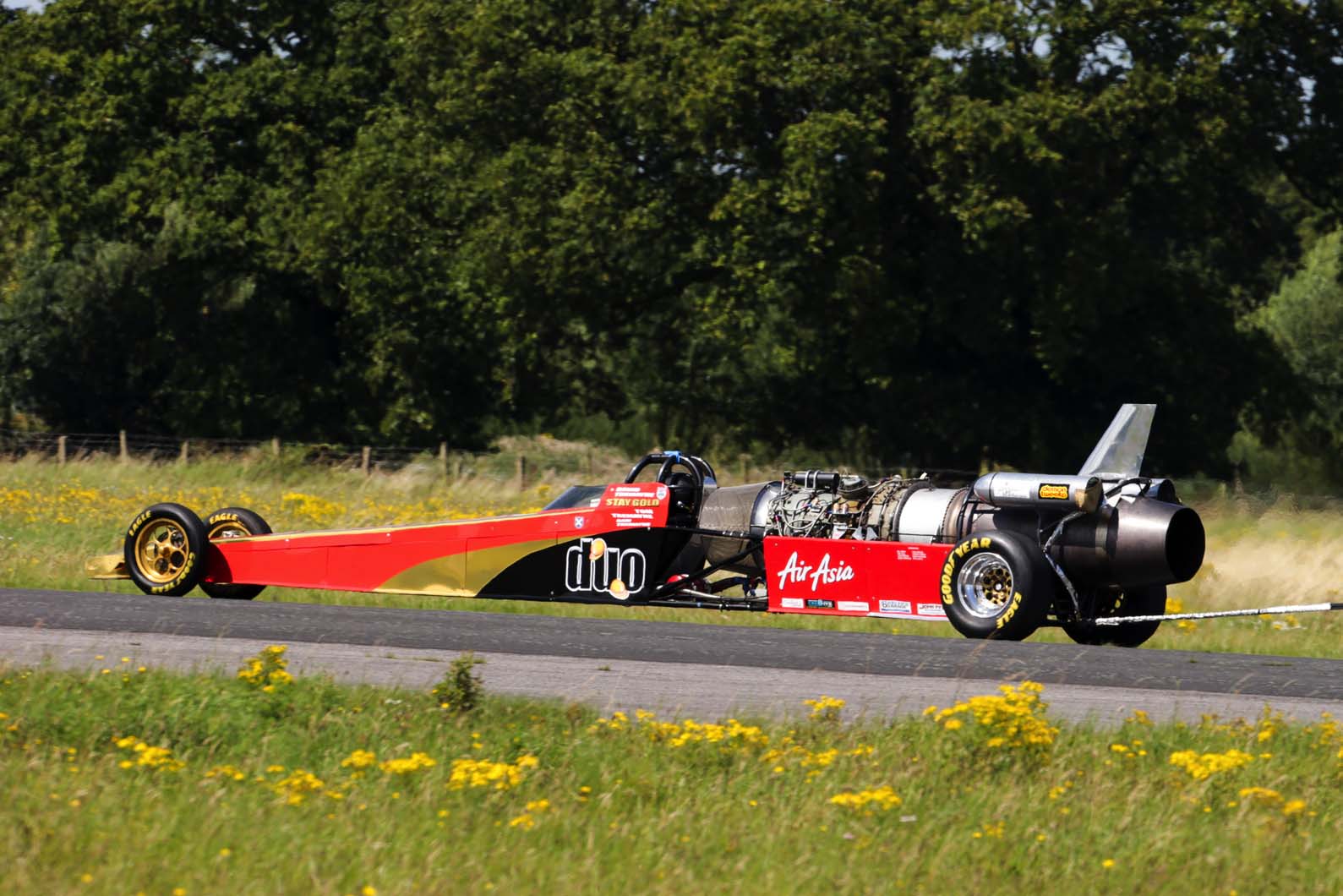 Minor difficulties with the power-boosting reheat resulted in less thrust, then the engine seized again and required an overnight fix back at the team’s Darlington HQ. This time, the problem was solved for good, ready for the following morning. The moment had arrived.

“I knew I couldn’t hold her on the brakes any longer and she was ready to go,” says Tremayne. As reheat kicked in, the ground trembled and Stay Gold launched at the horizon with a roar. After 500 metres, the car flashed through the start of the 500-metre measured sector, passing the closing marker 4.046 seconds later. With the job done, Tremayne shut off the fuel, closed the throttle and “let go of the laundry” – the large parachute – at around 285mph. But as the parachute snapped open, a crosswind gust caught it and snatched the rear of the car to the right. “For a nanosecond there was a good pull,” he says, “then I could see the left wheel coming up. Then there was a lot of banging and scraping as the car flipped onto its side at over 200mph. There was absolutely no time to be frightened and I felt weirdly detached. I didn’t like the look of the sparks coming into the cockpit, though. The accident took 12 seconds but seemed to take forever.”

There was no fire, the car landed on its wheels and a bruised but otherwise unharmed Tremayne made a swift exit. Stay Gold sustained damage to its rear fin and various extremities were battered, but the engine and main structure survived unharmed. 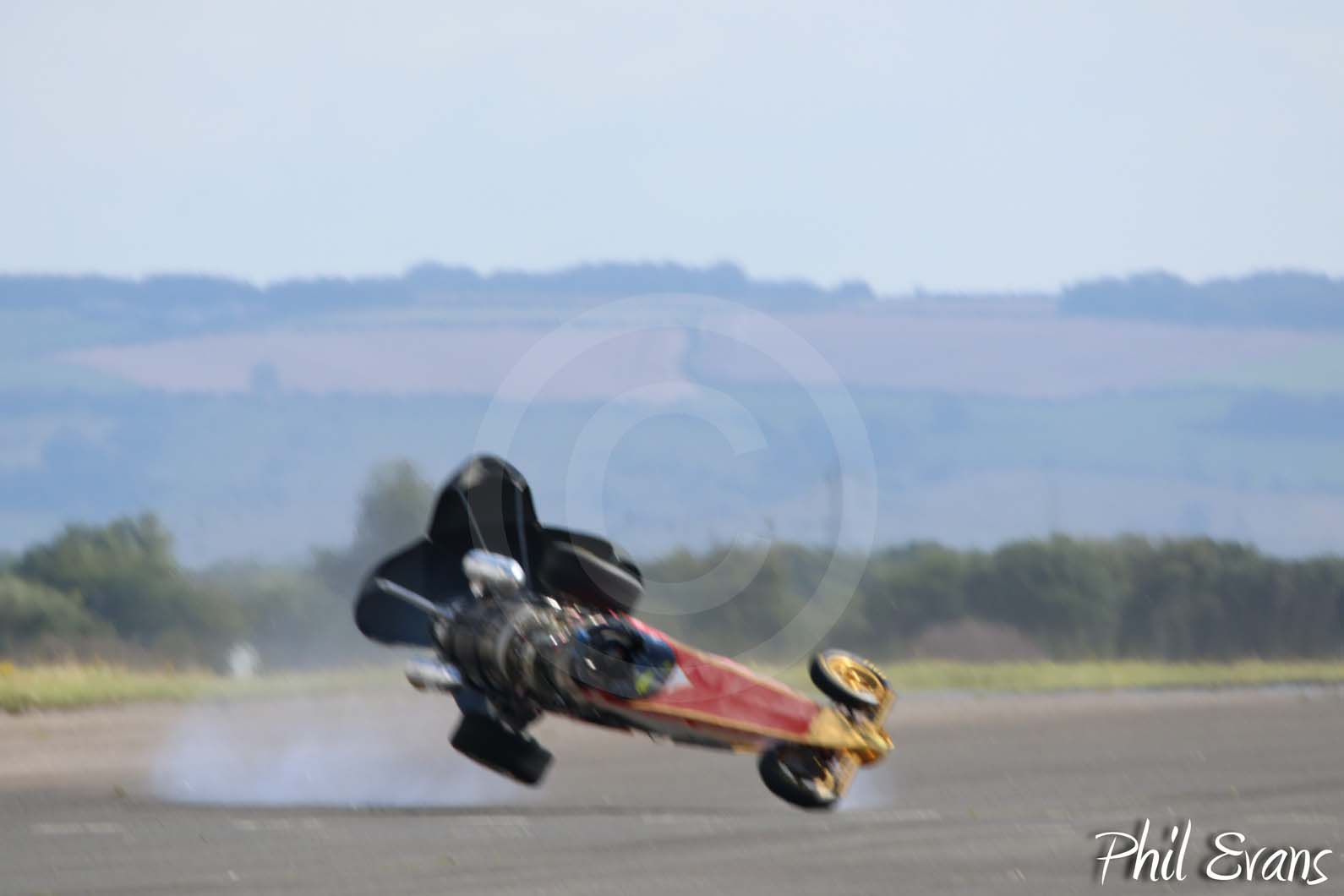 Acceleration from a standstill to 296.6mph took 14 seconds and the average over the measured distance was 275.260mph, less than 27mph off the UK record. It was the first time the car had ever run properly, so the team is happy with the pace. Now, though, a minimum of £35,000 is needed for repairs, plus modifications to the parachute mounting for improved stability, in order to make another attempt.

This was a case of ‘so near, yet so far’. The team’s new motto is ‘We’ll run again’, and its determination remains undiminished. 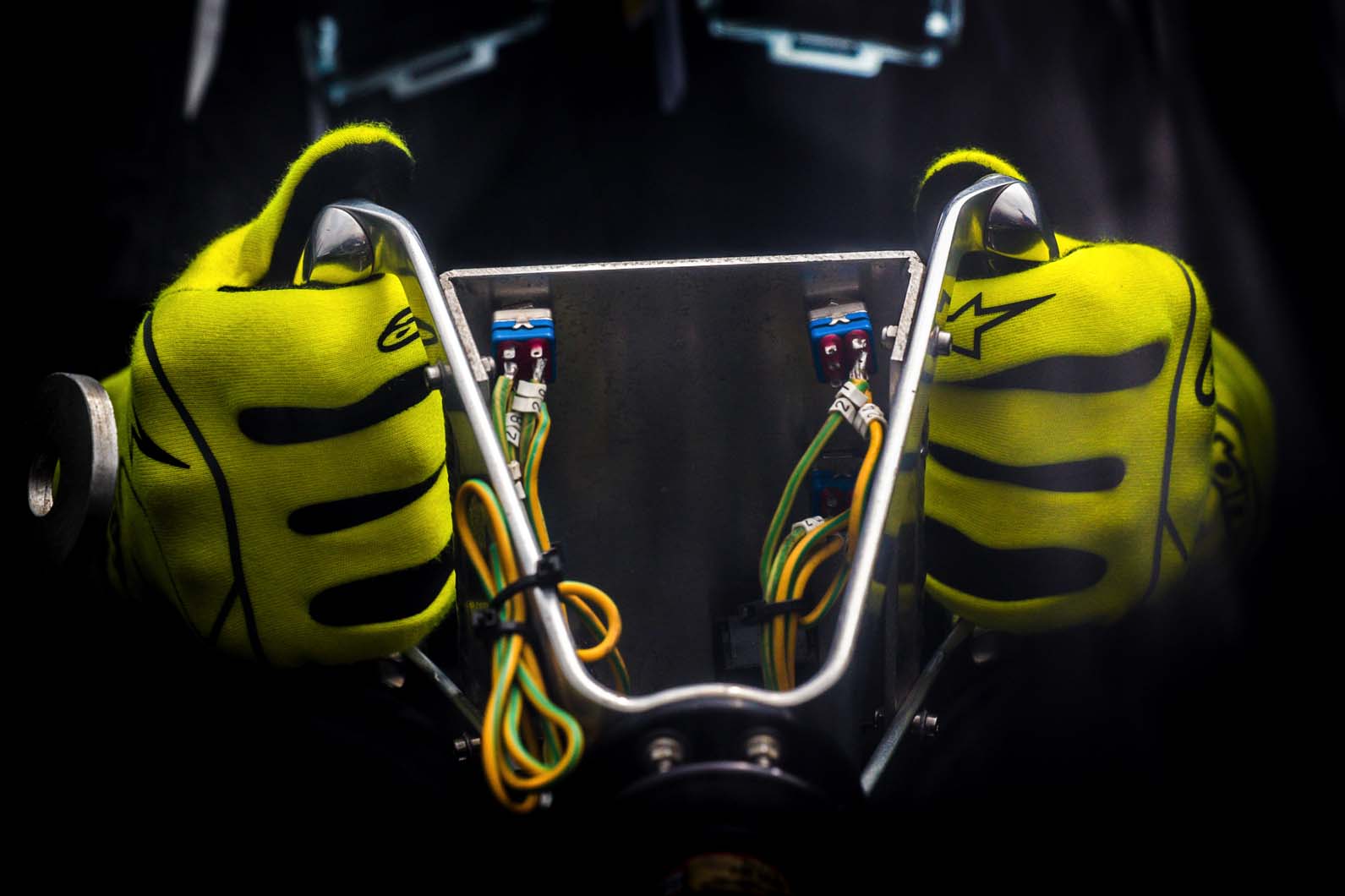 As a boy, F1 journalist and author David Tremayne was obsessed with record breaking in general and the Campbells in particular. He wrote the definitive book, Donald Campbell: The Man Behind The Mask, was a member of the Thrust2 and Thrust SSC teams and wrote books on both.

His first idea was to attempt a water speed record, so in 1984 he bought a Bristol Siddeley Orpheus engine for £400 and parked it in his garage with a view to installing it in a hydroplane, but that was later sold.

In 2008, he found Stay Gold (then called Road Zombie II) and paid for it with the proceeds of a book written for McLaren. With sponsorship from Tony Fernandes of Air Asia and Duo (Europe) PLC, the project was properly on the move. The name Stay Gold is a 180deg spin on the Robert Frost poem Nothing Gold Can Stay, which maintains that nothing stays the same as life moves on and dreams inevitably fade. Tremayne believes in the opposite: that if you have a dream, stick with it and never give up.

Land speed records: a history of a British obsession

Judging from the picture, the article might well have been titled "How to (almost) break your neck".