Aston Martin looks set to record its first pre-tax profit since 2010, thanks to strong sales demand for the DB11.

The launch of the DB11 grand tourer has seen output rise, with foreign demand, which accounts for 80% of Aston Martin’s overall sales, showing the biggest signs of growth.

"Our strong financial performance and continued profitability reflects the growing appeal of our high-performance sports cars, with the new DB11 Volante and a new Vantage [pictured below] expected to stimulate further demand in the coming year," boss Andy Palmer said.

Export demand has been helped by the weakness of the pound, with its effects also helping to support the wider UK car industry, which exported 5% more cars in October 2017 than in the same month the year before. 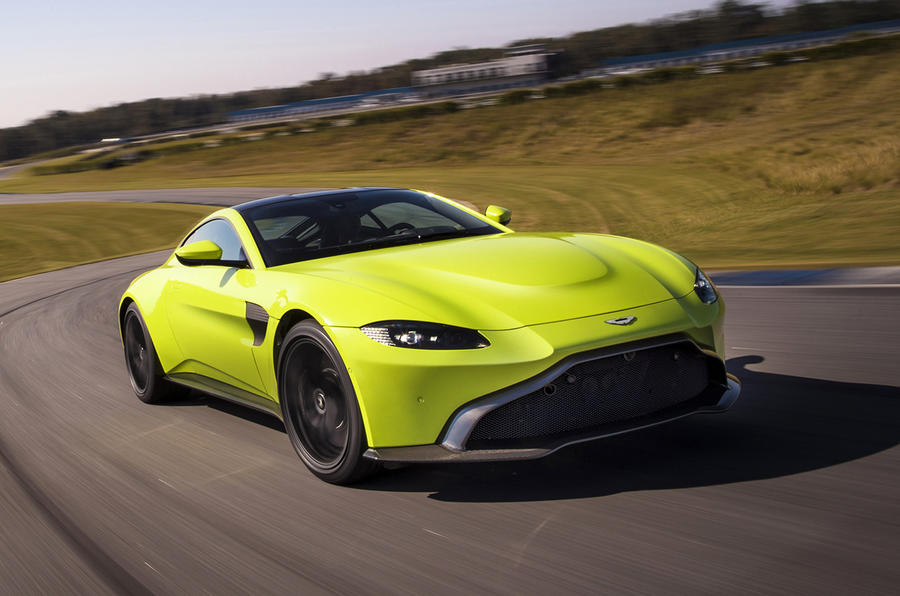 Aston Martin’s contribution to this national output remains small, with 3300 cars produced in the year to date, but it represents a growth in production of 65% compared with the same period in 2016. Third-quarter profit was £800,000 - although this period is historically low due to the impact that summer holidays have on car demand.

Gaydon-based Aston Martin was last in profit seven years ago. CEO Palmer signalled a turnaround when he joined the brand in 2014 with plans to improve efficiency and expand the model range.

The all-new Vantage, which is built in an adapted version of the DB11’s platform, has just been revealed and, like its sibling, will eventually be available in both V8 and V12 guises. The V8 engine has been supplied to Aston Martin as part of its partnership with Mercedes-AMG, which has also seen the German brand supply electronics to drastically reduce Aston Martin’s development costs.

The British company is building a new St Athan plant in Wales that has recently entered its second phase of construction. It is on course to be completed ahead of the launch of the DBX, Aston Martin’s first SUV, and will lead to 750 new employees being hired. St Athan will also play a significant role in developing Aston Martin's future electric and hybrid models, the first of which, the RapidE, is due in 2019.

Yes you can, it's called cognitive disonance, there's a lot of it about,

If you're wanting to buy a DB11 you've already got the money for a DB11.   Price differences of a few percent isn't going to sway your decision.

Whilst more funds will come in from foreign sources because of the weak pound, the parts that Aston have to buy will have risen in costs too.

And there's the rub.   Inflation is up, and that doesn't include shrinkflation that is genuinely impacting on people's cost of living.   It's claimed we're now £600+ a year worse off because of Brexit, and that means Aston and other employers will now have to increase their worker's wages.

That pressure is yet to come, but it will have to happen.

Although the one party that's supposed to represent the average working person is deafly silent on Brexit.   Where is Corbyn and Labour?

Good leadership from Andy Palmer, deserves a lot of credit and clearly knows regular new product is key to revival so these figures should climb as more new models come on stream, not sure why Ulrich Bex failed to deliver this after the initial wave of DB9 and Vantage that we’re then allowed to age with only minor updates.

not sure why Ulrich Bex failed to deliver this after the initial wave of DB9 and Vantage that we’re then allowed to age with only minor updates.

Ulrich Bez did a really good job at Aston after Walter Hayes.   Selling as much as three times as many cars as Aston had ever done before.

What undid his efforts, apparently, was the financial crash.   Demand for the cars wasn't at the same level as before, and I suspect therefore he couldn't borrow the funds required to develop newer models either.

Andy Palmer is undertaking a huge expansion in models offered by Aston, refreshing the existing line and adding an SUV.   But also expanding the Aston brand in to property, and even power boats.   I'm sure I've missed a few other avenues they're looking at too!   It is not without risk.   Reaction to the new V8 Vantage isn't encouraging either.

To put the £22 million profit in to context.   Palmer wants to build and supply engines for F1.   That's all the profits gone!   And if he wanted to have an Aston team, that's £ 400 million to be competitive.   Aston Martin isn't that rich a company.

Reaction to the new V8 Vantage isn't encouraging either.

First year's production is sold out and it was only revealed 2 days ago...? Truly bleak times ahead for Aston Martin.

First year's production is sold out and it was only revealed 2 days ago...? Truly bleak times ahead for Aston Martin.

I wonder how many are just speculating?

28 DB11s for sale on Autotrader just now, there was more earlier this year.   By contrast only 7 McLaren 720s (not including "new cars" that you have to order via the dealer).   Each of those being advertised for more than list price.

I've no doubt they'll sell, partly because it's an Aston, partly because they'll be dynamically better than the outgoing Vantage.   But I doubt it will have the longevitiy of that model.   And that's really the question.   After the initial surge will the car continue to sell in sufficient numbers?

The order book figures are not speculation...

And also the 720s has been on sale for less than half the time, and with a lower production rate you'd expect it to have much fewer on the second hand market

I'm trying to make some sense

I'm trying to make some sense out of the notion of building F1 engines. I can't. First, for me, Aston Martin racing is about sports car and endurance racing, not F1 (and I'm a big fan of F1 as well as WEC and the like). Second, and more to the point, are they really considering spending the still huge amount of money (assuming the rule changes haoppen that make it -- relatively -- less costly) to build an F1 engine when they've been reduced to using a bought-in off-the-shelf some-one else's engine for their new V8??? Please Andy, regain Aston's credibility as a thoroughbred car maker and build your own V8 ROAD CAR engine before spending big money on F1!

I'm trying to make some sense out of the notion of building F1 engines. I can't. First, for me, Aston Martin racing is about sports car and endurance racing, not F1

F1 is a money pit and Aston doesn't have the cash!   I follow F1, but Aston putting a badge on a car that has a Renault engine, which was previously badged by a watch maker, is incredulous.   There's no sense to it.

McLaren have an F1 history, yet even they won't do their own engine.

Yet for Aston Martin they do need to have their own power unit in their cars.   I can see the pragmatic approach to using an AMG, but I'd much rather have it a unique AMG engine rather than one off the shelf.   But to dilute the Aston brand this way, with F1 being a Renault engine, and the V8 Mercedes, is dangerous.

I've long had a fear that Palmer and Reichman are the wrong people for Aston.   Palmer because he thought having his name on the final inspection was a sign of quality - it's not as quality should be built in at every stage.   And Reichman as his designs are too fussy.   Adding details that the cars don't need.   There's a timeless elegance to the original Vanquish, and that's because Callum got it right.   It's every bit as timeless as the DB5.

The new V8 Vantage finished Reichman for me, sorry.   If you remember the "Max Power" magazine, too much of this design was taken from its front pages!