From £152,8659
Aston's decision to utilise AMG's 4.0-litre V8 struck us as an inspired one initially, but will a drive on UK roads change our minds?
Open gallery
Close

How, then, do you feel about an Aston Martin equipped with a Mercedes engine? Does it really matter? Should it matter, so long as it improves the product? After all, this ‘new’ eight-cylinder engine is a good one, with 503bhp and rampant torque. You may also have heard that this is no case of a straight engine swap, but perhaps you haven’t, so now that we’ve got the DB11 V8 on home Tarmac, let’s recap.

The DB11's ZF-sourced automatic gearbox remains entirely unchanged, sitting a fraction ahead of the rear axle complete with eight short ratios, while elsewhere, Aston Martin has made numerous amendments to the car in its attempt to best exploit a 115kg weight saving brought about by the loss of four cylinders.

For one, the brake balance has been altered, with changes to the piston size at the front. Efforts have also been made to improve pedal feel and address complaints from owners who felt the system was a little grabby at low speeds. The electric power steering has been retuned for slightly greater resistance off-centre and a greater feeling of confidence.

Spring rates are reduced all round, the anti-roll bars are stiffer and so too are the rear axle bushings, in order to mitigate the V12’s tendency for awkward diagonal weight transitions, so says chief engineer Matt Becker. There have also been detail changes to the suspension geometry, including a new lateral link in the multi-link rear.

As for ‘Aston-ising’ the barrel-chested 4.0-litre AMG engine, the air intakes, exhaust system and ECU software are fresh, although the greatest difference is that unlike in the Mercedes-AMG GT, it has a wet sump. That’s not only to do with cost savings and packaging – the engineers at Gaydon also don’t anticipate their cars will experience the prolonged lateral loadings that would necessitate a going dry. This new-for-Aston V8 also sits on different mounts to the 5.2-litre V12 of its bigger brother, while the DB11's chassis gets improved weight distribution.

If you’re wondering why anyone would buy the V12 on the basis of all that, well, so are we. Aston's trimming of the fat means the junior car trades almost 100bhp for a 0-62mph that’s just 0.1sec slower, at 4.0sec. It’s also £13,000 less dear, at a touch under £145,000. In fact, Becker says the V8 car’s 187mph top speed had to be held back a little to create some breathing space for the V12. It's comforting to think the double-tonne still matters on the showroom floor.

Extensive use within the vast AMG range means this ‘M178’ engine is now a well-known quantity, and because Aston has been limited largely to making only exhaust-tract modifications, it’s origins are unmistakable. That means a dominance of low-frequency tones, but instead of a relentless Harley-style thump, the note has been tuned to additionally deliver a more buoyant, refined quality, and that’s noticeable.

Basically, this car can still bellow profanities but it does so in received pronunciation, as you’d expect of an Aston. That’s especially true in Sport+ mode, which now gives you an even more distinct snap, crackle and pop with every lift of the throttle.

Surely a five-star car? Well, not quite. Blame refinement at speed, which suffers from tyre roar and the curiously loud rustle of air passing over the base of A-pillar. Interior fit isn’t good enough, either, even if the abundance of leather is supremely soft to the touch. The Mercedes-AMG S63 Coupé surpasses the Aston on both counts, though you’ll forfeit driver involvement.

If you’re set on a DB11, the AMG-engined car is the one to have, and a hugely desirable – and yes, improved – product. That’s until Aston Martin applies all these changes to the V12 car next year, at least. When that happens, we shall have a real conundrum on our hands. 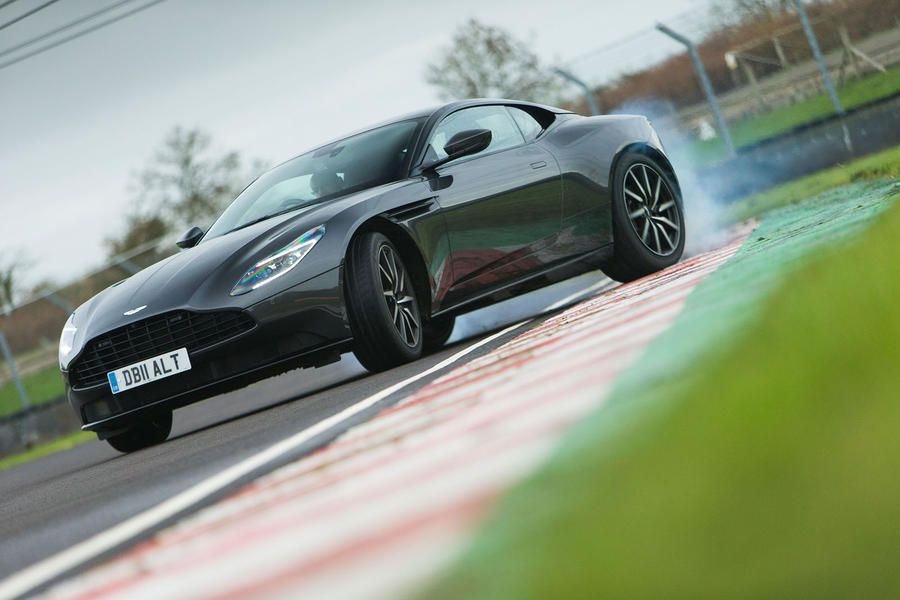 It has electric steering

as this has electric steering, does it make it a tesla rival?

"decision to utilise AMG's V8 struck us as an inspired one..."

"Aston's decision to utilise AMG's V8 struck us as an inspired one..."

What 'inspired decision'?! Aston is too small to be able to properly develop its own engines and since leaving Ford's PAG would have to look to other sources. Rivals wouldn't have sold AM engines to compete against them with while Mercedes' brand doesn't stretch to this far end of the market and Maybach failed so it was a natural fit for Mercedes to invest with an eye to taking over fully in the future. The only question is why doesn't Mercedes get on with it now, it has the platforms, engines, technology to do what VW did to Bentley and BMW did to Rolls Royce.

I'm going to politely disagree with the author about which engine is best for this car. This is not an everyday car, and the V12 is simply more special. But a more serious concern is the interior. The new Conti is similar money and there's always the option of a 3 year old Wraith, both of which are in a different league. The new Vantage seems to show you can make something look more bespoke - or at least less mainstream - with pretty much the same architecture.
View all comments (6)