BACK TO ALL NEWS
Currently reading: Analysis: Is there a place for hydrogen in motoring?
UP NEXT
Lamborghini Sterrato off-road supercar spotted testing

The rapid growth in EV sales over the past few months has been well documented, with zero-emissions models now accounting for 4.7% of UK market share for the year to date. It’s still modest but significantly more than the 1.4% share from the same period last year and – notably – means so far in 2020, EVs have outsold plug-in hybrids, so often called “the bridge technology” to EV adoption.

But those figures of low-emissions vehicle sales, published by the Society of Motor Manufacturers and Traders (SMMT), have one obvious powertrain missing: hydrogen fuel cell vehicles, or FCEVs. That’s because their numbers are so minimal that sales wouldn’t even account for 0.01% market share. In 2019, 68 FCEVs were sold, almost double that of 2018. So far this year, 19 have been registered.

But commitment to hydrogen-powered vehicles is increasing across the industry and many predict they will become as important as battery-electric vehicles (BEVs) over time, in the way that petrol and diesel have sat alongside each other for so long. Hyundai and Toyota remain the major players for now. They are the only two mainstream brands to offer hydrogen-powered cars on UK sale today: the Nexo and Mirai.

Hyundai is planning a 500,000-units-per-year production capacity of FCEVs by 2030, including cars and commercial vehicles. Toyota, meanwhile, aims to increase global production to 30,000 fuel cell stacks by the early 2020s and has started deploying its hydrogen buses, forklifts and heavy trucks in some parts of the world. 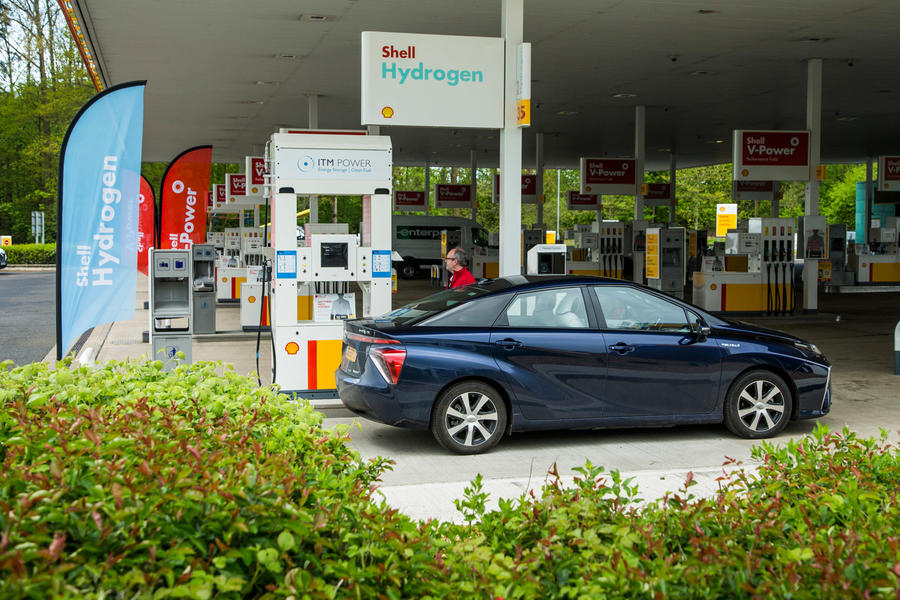 Other car makers are dipping their toes in the water. Mercedes offers the GLC F-Cell in Germany, but only on lease, and BMW plans to launch hydrogen-fuelled vehicles in some of its larger SUVs, such as the X6 and X7, from 2025.

BMW’s board member for research and development, Klaus Fröhlich, told Autocar earlier this year: “We are convinced that various alternative powertrain systems will exist alongside one another in future, as there is no single solution that addresses the full spectrum of customers’ mobility requirements worldwide.

“The hydrogen fuel cell technology could quite feasibly become the fourth pillar of our powertrain portfolio in the long term. The upper-end models in our X family would make particularly suitable candidates.”

Closer to home, it’s not just manufacturers that are committing to hydrogen investment. The government announced this summer that it was making a £73.5 million investment to develop green technologies for 10 projects, one of which is a hydrogen fuel cell prototype project with Jaguar Land Rover (JLR).

The government said: “Hydrogen can play a role as a viable fuel in the future across the automotive industry alongside battery-electric vehicles. The project will help drive significant growth and capability in fuel cell electric vehicle design and manufacturing, providing a competitive edge in intellectual property and supply chain for the UK.”

On its impact to UK industry, he said: “If you think of all the commodities that go into battery-electric vehicles and hydrogen vehicles, if we can manufacture those in the UK, we can create a whole ecosystem to make the UK’s life better and propel us into a world where we’re not reliant on an oil-driven economy.”

Despite this progress, FCEVs clearly are not where BEVs are today. The predominant reason is fuel cell production cost, which is still significantly higher than that of batteries. The result is expensive vehicles – for example, the Hyundai Nexo is £69,495 – which inevitably puts consumers off (although many FCEVs are leased – in the case of Nexos, half of them). The refuelling infrastructure also needs attention, with fewer than 15 refuelling points currently in the UK.

Other hurdles include concerns over the safety of hydrogen storage and the sustainability of how the hydrogen is created. Splitting water into hydrogen – the most common method of creating it – demands a lot of electricity, so it only makes sense if it’s created with renewable energy.

One clear route forward for hydrogen is in commercial vehicles. Thanks to faster refuelling (almost equivalent to petrol and diesel) and longer range than BEVs, hydrogen and commercial vehicles are a more natural fit than battery-electric. Hyundai-Kia’s FCEV R&D boss, Sae-Hoon Kim, has said: “Developing fuel cell technology for commercial vehicles is a priority for advancing the uptake of hydrogen”. 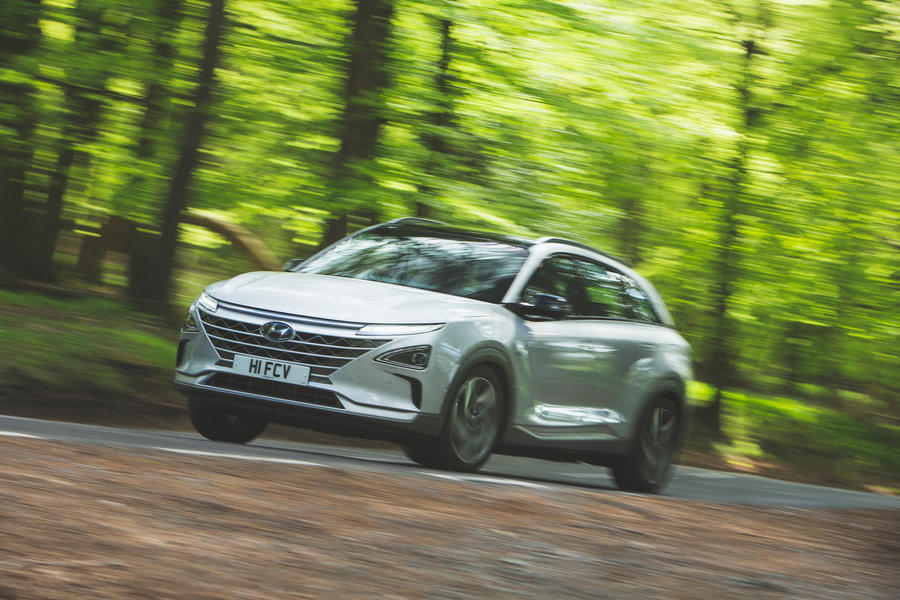 For now, some makers are only betting on hydrogen commercial vehicles. The PSA Group plans to launch a fuel cell van by 2021 that’s likely to include a Vauxhall version, but there are no hydrogen cars on the cards. PSA UK boss Alison Jones said: “At the moment, we are focused on the plug-in hybrid and battery solutions we have [for cars].”

Talking about manufacturers’ plans, SMMT chief executive Mike Hawes said: “Hydrogen will have a seat at the table in the future. We’re already seeing different manufacturers have different strategies. Some are saying electric. Some are saying electric and hydrogen. Certainly for heavier vehicles, it will be a mainstay. We’re already seeing it in some buses and larger vehicles.”

Most industry executives worldwide also believe FCEVs will break through in industrial transportation, according to KPMG’s 2020 Automotive Executive Survey. A total of 84% of players predicted hydrogen progress would first come through transport larger than cars, up 5% on 2019.

There’s no doubt, then, that commercial vehicles will lead the way for hydrogen power, but when might we expect reasonably priced cars to battle BEVs? According to Hyundai’s Kim: “At around 200,000 units a year, you get the scale to buy the materials you need at a price that could put a hydrogen car on a cost par with today’s battery-electric vehicles. At the current rate of demand, I can see that happening within five years.”

Hydrogen-powered Range Rover is a no-brainer

Log in or register to post comments
CryptoKing 5 July 2021
Well, did you know that H²O is just Hydrogen and Oxygen, hence the name H²O. Now, in our H²O we have many pollutants and metals that make water conductive. In it's pure form, water is not conductive in the same way. Now, if we used PURE H²O as the fuel and not the polluted water we use, the actual byproduct when used in a cell, it is, JUST OXYGEN. WOW, what a discovery for you people... Now, does that push H²O as a REAL PURE FORM, as the universes number 1 fuel!!! Just think logic, it's number 1 on periodic table, it's the most abundant gas in the universe. You would have thought by now, the power who own the oil companies want to tell you this, nooooooo. Let's change a few things here with the real energy efficient way that cost, let's hear it, NOTHING IT'S WATER.

Any haters or someone who can tell me anything differently, let's chat so I can re-educate you in the field of Quantum and the field of ENERGY EFFICIENCY

Still a long way to go yet.

Yet another biased advertorial glossing over the main source of hydrogen. Hydrogen is needed by the fossil fuel industry to maintain its business in the future. Over 95% of hydrogen is produced by cracking methane and other fossil fuels producing hydrogen and carbon dioxide. They perpetuate the myth of clean hydrogen being produced from the electrolysis of water which accounts for 5% at best. Fuels cells are easily poisoned by atmosheric pollutants so require expensive filtering of the air  to remove these. Not an ideal situation for using fuel cells in city centres. I am all for reducing emmisions and having cleaner vehicles but the hydrogen refuelling structure has a lot further to go than the current mess of EV chargers at the moment.