BACK TO ALL NEWS
Currently reading: Alfa Romeo Mito to be axed in early 2019
UP NEXT
Nearly new buying guide: Volvo V60

Alfa Romeo Mito to be axed in early 2019

With demand for three-door cars waning, Alfa Romeo will instead focus on a new era of SUVs and sports cars
Share
Close
Share story

The Alfa Romeo Mito will be canned early next year as the brand makes way for a new era of SUVs and sports cars, Europe boss Roberta Zerbi has confirmed.

In June, Alfa Romeo’s parent company, Fiat Chrysler Automobiles, laid out a five-year plan for the Italian maker, which includes two new SUVs, a range-topping 8C sports car and a modern-day GTV, a four- seat coupé. The Mito did not feature in the plans but no more details were given.

Now, Zerbi has confirmed to Autocar that it will be withdrawn from sale by early next year. “Mito is a three-door and people are choosing more and more five-door cars,” she said.

Zerbi added that previous buyers of the Mito would hopefully migrate into the Giulia or upcoming small SUV, which will sit below the Stelvio in its range.

She said the small SUV was the upcoming model she was most excited about: “This is the one that will allow us to talk to a wider audience, a younger audience of 30- to 40-year-olds.

“It can help fill the gap between the Giulietta and Stelvio. And people that bought a Mito in the last couple of years – people grow up, start having children [and need a bigger car].”

Zerbi confirmed that it won’t look like a smaller Stelvio, in the vein of Audi and its Russian-doll SUV styling, saying it will “look like a family [of cars]”.

She would not confirm when the small SUV will be launched but we expect to see it in the next two years. 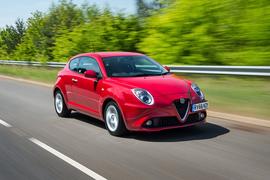 I'm in the target demographics

2012 MitoQV here which has been fantastic on road and track. Plenty of fun after a few upgrades, love my little italian toy. Sadly they stopped the 6 speed in the giuletta and the giulia doesnt have a manual either. They should at least have one w-liter base giulia with a manual and traction control that can be disabled for track days. I will probably end up with a Golf or a 308 gti then!
superstevie 15 August 2018

The problem with the Mito isn

The problem with the Mito isn't the fact that it was 3 door. The problem is that they never developed the car. I test drove one when they were new in 2009, and it was awful. Steering was connected by elastic bands, the interior of the 1200 mile demonstator was tatty looking, and it just wasn't fun. It was very quick, I remember that, but that was it. I ended up with a MINI. Speaking of MINI, this is the other problem with the Mito has never been properly updated since launch. They could easily have had a 5 door version by now that people wanted if they had just spent some money on one, rather than 50 million different rescue plans

If you look at the last player who broke into the premium market , that's Audi fro the 80s onwards. They started with A6 size (100) and A4 (80) they then fleshed out down and up from there . People perceived them as quality so when they did bring out the A1 they could charge more as people associated them with premium saloons/coupes/4×4 etc . Bmw and Merc have done the same . Jaguar are doing it now . It's easier to spread your premiumness down than try to create it upwards , ask Peugeot, Citroen, Renault , Vauxhall, Kia etc etc etc .
View all comments (15)