BACK TO ALL NEWS
Currently reading: Alfa Romeo brings back 8C and GTV, and adds two more SUVs
UP NEXT
How Audi's CEO is transforming the 111-year-old brand

Alfa Romeo will reintroduce two iconic models, the 8C and GTV, by 2022 as part of a bold five-year strategy announced today.

It will also launch a new mid-sized SUV and a large SUV that sit, respectively, below and above the Stelvio, which has brought huge success to Alfa Romeo since launching last year.

The Italian brand also confirmed long-wheelbase versions of the Giulia and Stelvio. LWB variants are a growing trend, thanks largely to demand in China, where chauffeur-driven cars are popular.

The new additions coming by 2022 will almost double Alfa Romeo's line-up, bringing the range to nine models. Currently, it consists of the Giulia, Giulietta, Stelvio, 4C Spider and Mito. The Mito had been highly tipped to be axed, and although there was no mention of it in today's announcement, a product plan slide suggested that the model will be phased out by 2022.

The new 8C will be a twin-turbo mid-engined sports car with an electrified front axle delivering at least 700bhp with a 0-62mph time of less than three seconds.

The last time we saw the 8C nameplate was during 2007-2010 with the 8C Competizione, which was a front-engined model that used a 4.7-litre Ferrari-derived V8 and achieved the benchmark sprint in 4.2sec. 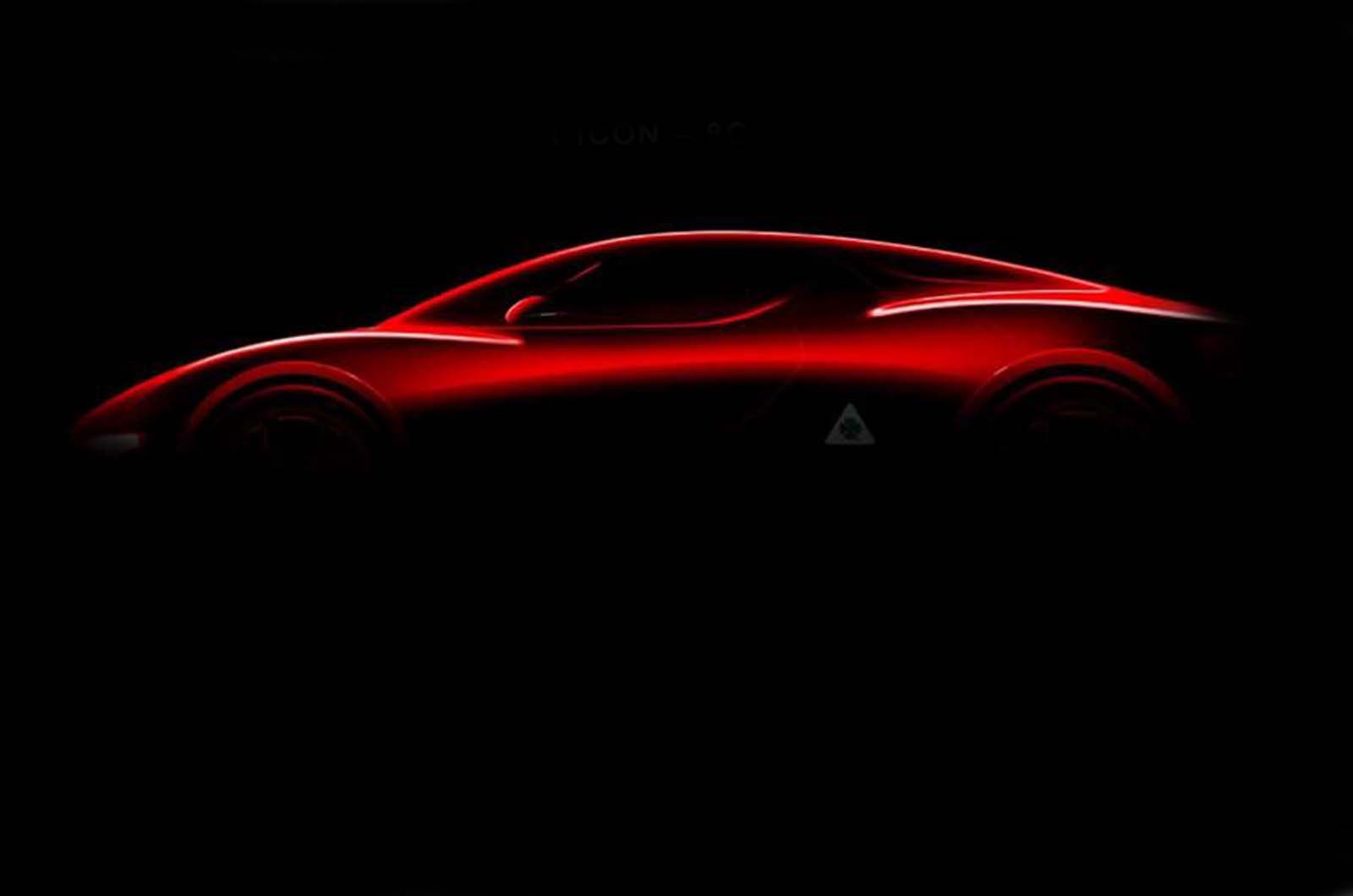 Meanwhile, the GTV — essentially a coupé version of the well-received Giulia — will have more than 600bhp with E-Boost technology, all-wheel drive torque vectoring, 50/50 weight distribution and room for four occupants. The last GTV went off sale in 2005.

Talking about its plans to relaunch the 8C and GTV sports cars, Kuniskis said: "Alfa will deliver the sports car of each segment it enters. We know our future depends on staying true to our sports car roots; cars designed to represent the brand’s position and inspire the next generation of customers.

“The 8C is a true supercar with a mid-engined, carbonfibre monocoque chassis and electrified AWD system. It’s a car that will be born for the track here at Bolocco.

“We also want a sports car as attainable as it is aspirational, so we’re bringing back one of the most fabled names in Alfa history, the GTV. The Quadrofoglio model will deliver more than 600hp."

The 4C is Alfa's first true driver's car for decades, and it shows how brilliantly a small turbo four can go and sound in a lightweight package

On the two new SUVS, Kuniskis said: "The timing of our expansion plans couldn’t be more optimum. The premium market is growing and there are considerable opportunities int hat segment.

“There are two key segments: compact UV [utility vehicle] and full-sized UV. These segments represent 81% of global premium market growth. We will ensure each new product embraces our brand principles. 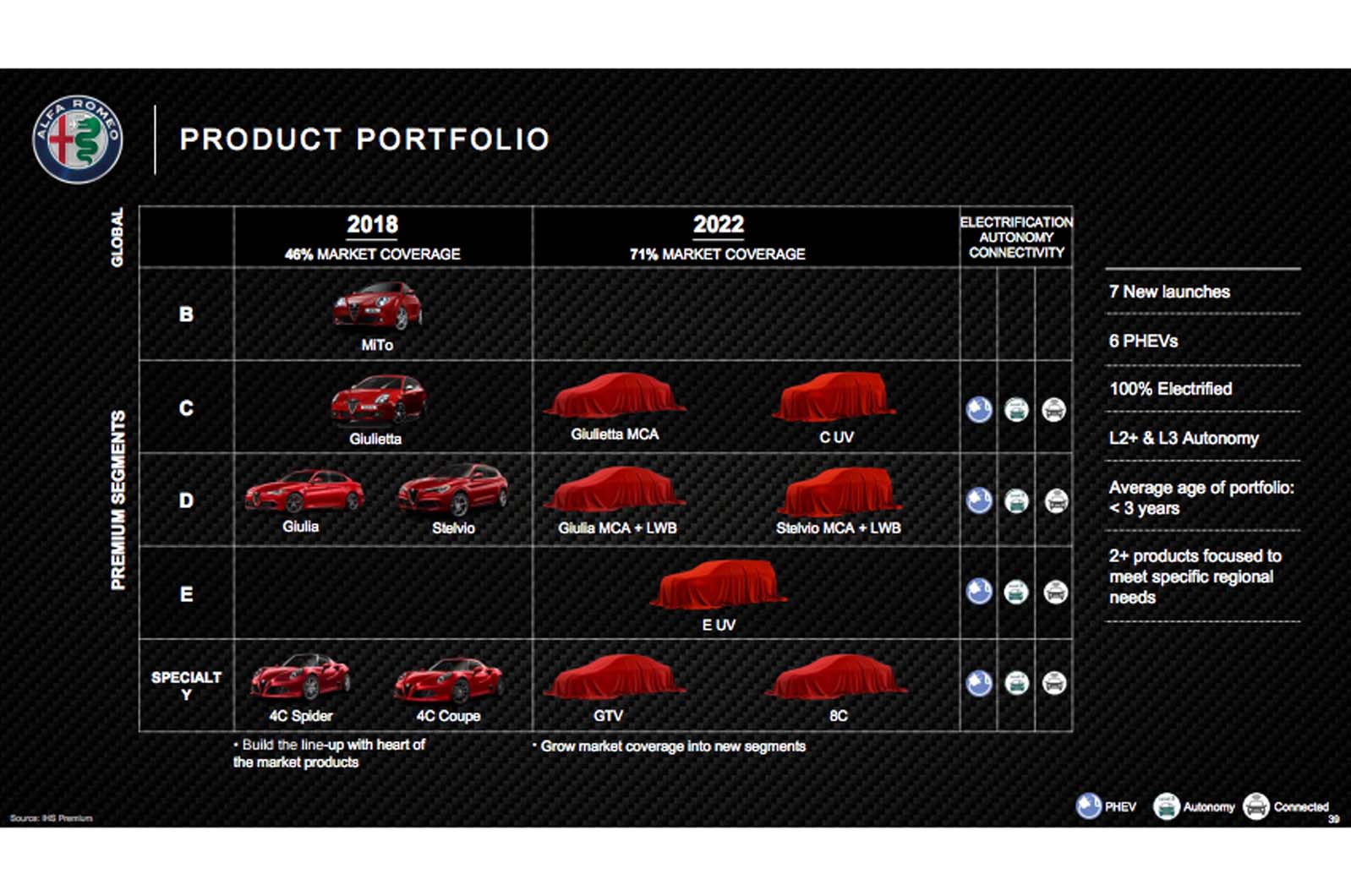 “What we’ve learned in last four years is that when we stay true to Alfa DNA, we can stand out in any segment, as we did with Stelvio.”

He added that, by 2022, Alfa Romeo will compete in more than 70% of the premium industry: “We will launch the sports cars of every segment.”

As with all FCA brands, Alfa is phasing out diesel engines from its range, and is launching a range of mild hybrids, hybrids and plug-in hybrids. It aims to offer an electrified version of every model in its range by 2022, including six PHEVs. Alfa’s PHEV system will allow cars to complete around 31 miles on pure electric power, and offer 0-62mph times in the mid-4sec area.

All of its models will also offer level two or three autonomous driver assistance systems.

Talking of the brand's struggles, FCA CEO Sergio Marchionne said: "We got two things wrong - we underestimated the industrial complexity of launching a brand as complex as Alfa. This caused delays in launch, additional cost, and slowed down the development portfolio. We also underestimated the reaction of Germans to the reintroduction of Alfa."

"Would I do it again? Not in the same way, but certainly would do it again."

Losing trust with FCA......won't believe anything they said until they have the production car in the mkt......every year they said what they're going to do but only a tiny % has came true.....also they are doing thing too slow.....losing patience

Mito Out of Production

The reason that the Mito is not mentioned is because production of RHD versions has ceasec, or will cease very shortly. Factory orders can't be placed

The stock will be sold off over the next couple of years....

Just as they have "spun-off" Ferrari (with a proportion of Ferrari company shares traded in New York, and Europe), that same degree of corporate, financial, independence and protection, needs to be extended to the (to be) remaining companies that will be - still - be producing cars in Italy, Alfa-Romeo, Maserati, and . . . . JEEP !!

A token - maybe only 10% - mutual exchange of shares between each/all these four "specialist" producers, would confirm and consolidate their continued co-operation, and commercial independence from predators!

The obvious abbreviation for JUST the four Italian companies, would - of course - be "FA-RM" . . .

(Whilst that might mean something in the English language, it is not known if it might be offensive in any other language!).

When JEEP is included, this group of semi-autonomous, independent, specialist, companies would/could be referred to as the "FA-RM JEEP".

Just as Audi was/is managed separately, independently from VW, removing the "FA-RM JEEP" to an "at arms length" financial, commercial, managerial, position . . . would enable the "parent" FCA to then apply all its - MUCH NEEDED - expertise, attention and concentration onto the remaining FIAT and Chrysler-Dodge.