BACK TO ALL NEWS
Currently reading: How gaming technology is aiding the car industry
UP NEXT
Hardcore BMW M4 CSL brings 542bhp, sheds 100kg

How gaming technology is aiding the car industry

When two worlds collide, it’s to be expected that the status quo will change dramatically, and that’s what could be about to happen in the car industry when the ‘metaverse’ arrives.

Nobody knows when that will happen, but those in and around the software industry are convinced it won’t be long. ‘Metaverse’ means physical reality, augmented reality and virtual reality all rolled into one; and to some extent, it’s already here. It’s a way in which people can interact with each another and objects via virtual avatars, mixing reality with a virtual representation of a world.

One of the keys for making the metaverse a reality is Unreal Engine, a software framework developed by Epic Games that underpins a vast array of online video games today. These include the world’s biggest, Fortnite, which is estimated by Unreal Engine business development manager Doug Wolff to have 350-400 million players from around the world interacting in its online environment.

“We’ve believed for some time that the metaverse will become a reality, where the internet goes 3D and is a persistent digital world,” said Wolff. “That old trope of going into cyberspace will become a real thing, and it’s rapidly on its way to becoming so.

“The idea that a tool known for making video games is somehow relevant in this way is new, and it has taken a while for people to understand that, one, this revolution is taking place and, two, that an automotivecompany needs to take notice.”

By switching online game developers for car designers, engineers and marketeers, the gaming software becomes a tool for creating new cars, and it’s formidably powerful, because of its simplicity of use. Except in some advanced circumstances, designers and engineers no longer need programmers between them and the things they imagine. 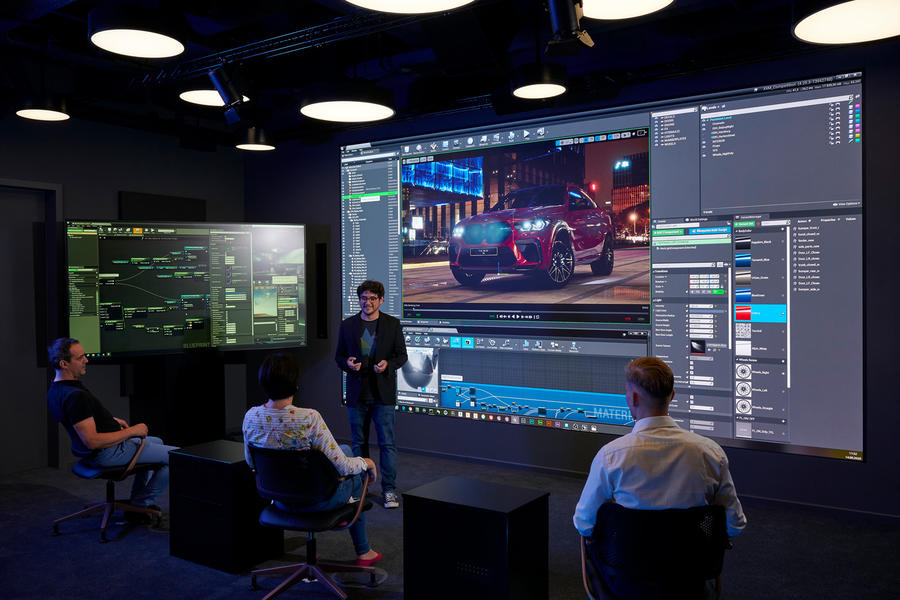 The process is hands-on and immediate and can be shared. Wolff maintains that the representation of any product or brand in real-time digital 3D is becoming the standard way of a firm presenting itself to you. For example, most online car configurators are 3D now.

“3D in CAD [computer-aided design] has been around for 20 years or more, but there has still been more emphasis on clay modelling,” he said. “The translation from a computer to something that could be consumed was quite a distance to travel in hearts and minds.

“People want to see a 3D representation of the thing they’re buying, working on or engaged with all the way through the product’s lifecycle. “For automotive, it means the tool that marketeers are working in is the same tool that the designers and engineers are using and the same tool behind your car’s humanmachine interface [HMI].”

Wolff described this concept as the “single source of truth”, a “digital twin” of the real thing, and added that it moves the place where 3D data is stored from a number of different “silos” into one digital location. If a company wants to make a film showing a car that doesn’t exist yet, all it needs is the same 3D “asset” that’s being used across the development spectrum for Unreal Engine to render in any way the film-maker choses.

Shooting video against background images on a 3D wall used to be ruled out, because it gave no sense of parallax (the apparent displacement of objects from the observer’s point of view), but using a real-time game engine changes that. 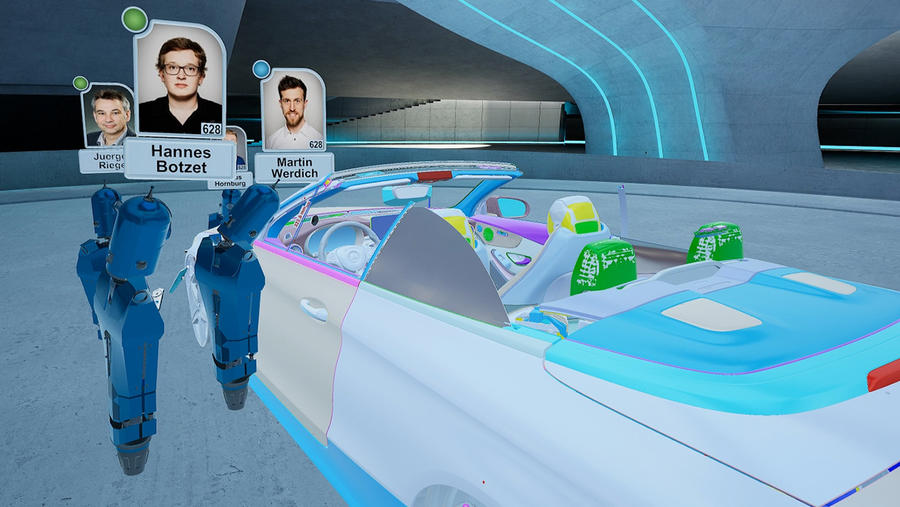 The technique was used in a recent Volkswagen ID 4 advert shot at the Hyperbowl facility in Munich, Germany, where television series The Mandalorian is made. Huge LED walls not only produce the 3D background sets in real time but also generate the same authentic lighting and reflections as a real location.

Unreal Engine is also being used by Daimler, using low-cost computing distributed via the cloud (servers accessed over the internet, rather than sited locally) enabling designers and engineers to share virtual-reality (VR) models across its various global sites.

According to Wolff, Daimler refers to the new methodology as “a multiplayer online game for engineers,” integrating CAD data and the power of a multi-user game environment in the simplest possible way. BMW is also using Unreal Engine as a central part of its visualisation strategy.

The next stage is using this tech in a car to create its HMI. Again, the fact that HMI designers directly control the 3D graphics, rather than relying on cumbersome rendering, makes the process much faster and gives an end result exactly as imagined.

General Motors is the first to create an in-car HMI in this way, for the new Hummer EV. As techniques develop, it’s conceivable that the metaverse could come inside a car itself, and while that poses obvious challenges in terms of reality versus the virtual reality, it could also mean that the in-car environment and experiences will change more than anyone today could possibly imagine.

The whole process is likely to be sped up by the commercial aspects of these tools. Although Epic Games charges for support (which appeals to automotive firms), obtaining and using the Unreal Engine is free. Epic Games takes percentages only after the sales revenue of a resultant product crosses a certain threshold.

“We don’t monetise the use of our software in the development,” explained Wolff. “Our founder and CEO, Tim Sweeney, is a developer and programmer by trade, and he feels that monetising at the point of the creator is the wrong place to be.”

“We believe in providing tools for people to achieve success and then find some mechanism to monetise that success. That’s what you see happening with games.”

In the automotive industry, Epic Games is counting on the emergence of the metaverse to make money. So if a customer configures, test-drives and buys a car in a metaverse built using the Unreal Engine, there could be a form of commission that’s automatically applied.

It’s a bold plan but one that, like everything else in this scenario, could provide one of the biggest shake-ups the car industry has ever seen – and both manufacturers and their customers stand to benefit. 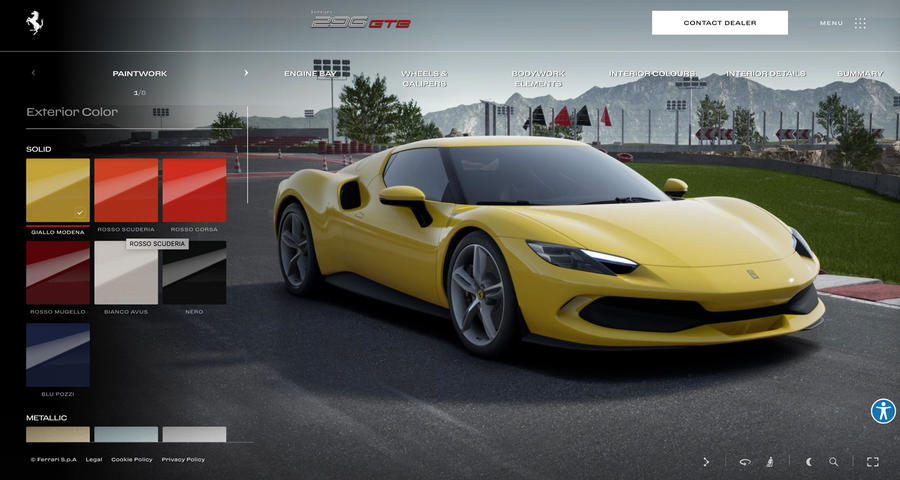 The Ferrari 296 GTB has become the first driveable real-life car in the world’s biggest online video game, Fortnite, which is produced by Epic Games using its Unreal Engine software.

Ferrari has been working with the Unreal Engine since 2017 to produce the 296 GTB configurator and other material, including the promotional videos on the Ferrari website. It’s taking what it calls an omni-channel approach to presentation, so whichever aspect of it interests you, the experience is the same, making it more accessible.

The 296 GTB configurator was Ferrari’s first step in using the Unreal Engine, and from there, it expanded its use into other parts of its digital visual systems.

Ferrari soon realised the potential of a video-game engine for film-making. For the 296 GTB’s launch videos, it used huge LED backdrop screens to place the car into whatever scenic environment its creative teams dreamt up. Starting with reference images, they made previews using the long-established Cinema 4D software suite.

After that, they used Unreal Engine to develop the images’ lighting, shading and textures and used plug-ins including Ultra Dynamic Sky and Advanced Water Material and the Blueprint Scripting System to interact with another digital production system called Disguise.

".....and both manufacturers and their customers stand to benefit."

I don't pretend to understand all this, but how will the customer benefit exactly?