BACK TO ALL NEWS
Currently reading: Ford ends production in Brazil after 101 years
UP NEXT
Two worlds collide: Porsche Taycan vs Alpina B3

Ford will close its three remaining Brazilian production facilities this year as part of an ongoing global cost-cutting programme.

The US brand has maintained a presence in the South American country since 1919, when it began assembling the Model T for the local market, but a radical global restructuring process will result in operations being wound down, with the loss of around 5000 jobs and pre-tax charges to the company of around £3 billion.

At the close of trading on Monday 11 November, Ford shares were up more than 3% in the wake of the announcement.

Two years ago, Ford detailed a plan to cut costs globally by £14bn, including "surplus labour" being curtailed throughout its global production network, but the pandemic is cited as a catalyst for the closures.

Ford South America president Lyle Watters said that although there have been "improved results over the past four quarters," the "continued unfavourable economic environment" necessitated the measures.

Vehicle production at the brand's Camaçari and Taubaté sites has stopped with immediate effect, although each will continue to produce parts for several months to support the aftermarket, while the Troller SUV production line will remain open until the last quarter of this year. 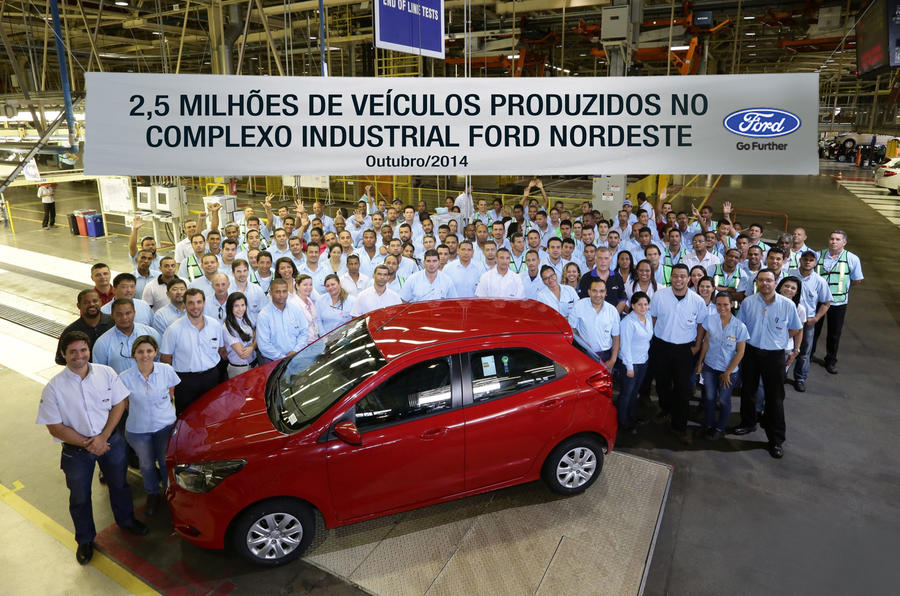 The production sites aren't earmarked for immediate demolition, and Ford said it will "continue to facilitate possible and reasonable alternatives for interested parties to purchase the available production facilities".

Models built in Brazil include the Ka+ supermini, which exited the European market in 2019, and the Ecosport small SUV, European examples of which were built in Romania.

Ford used to produce its F-4000 and F-350 heavy-duty pick-up trucks at a facility in São Bernardo do Campo but closed that site for similar reasons in 2019.

Although local production is ending, Ford said that it will "serve consumers in South America with an exciting portfolio of connected and increasingly electrified vehicles, including SUVs, pick-ups and commercial vehicles from Argentina, Uruguay and other markets".

Ford CEO Jim Farley said: “Ford has been present in South America and Brazil for more than a century, and we know that these are very difficult but necessary actions to create a healthy and sustainable business.

“We're moving to an agile and lean business model by ending production in Brazil, serving our consumers with some of the most exciting products in our global portfolio.

"We will also accelerate the availability of the benefits brought by connectivity, electrification and autonomous technologies, effectively meeting the need for more environmentally efficient and safer vehicles in the future. ”

The car industry now: Could Ford follow GM out of Europe?​

Good on Ford for leaving that corrupt and human-rights-abusing place. Now they should seriously consider returning to manufacturing in the UK one of their most loyal and reliable customer base.

You celebrate 5000 jobs lost (and many more in the supply chain) because of a corrupt regime. Touch heartless don't you think?