We’re standing in a group, chatting in the foyer of Jaguar Land Rover’s Classic Works, the company’s magnificent new Coventry home for old cars. We’re awaiting the arrival of Norman Dewis OBE, undoubtedly the greatest Jaguar classic of all.

The iconic former chief test engineer, who joined the company in 1952 with the brief of “signing off every competition and road-going Jaguar”, has just celebrated his 98th birthday as if it’s his 40th. He’s agreed to drop in to Classic for a bit of pre-Christmas cheer, and to take his first-ever drive in the new electric I-Pace with Ian Callum, the man who designed it. 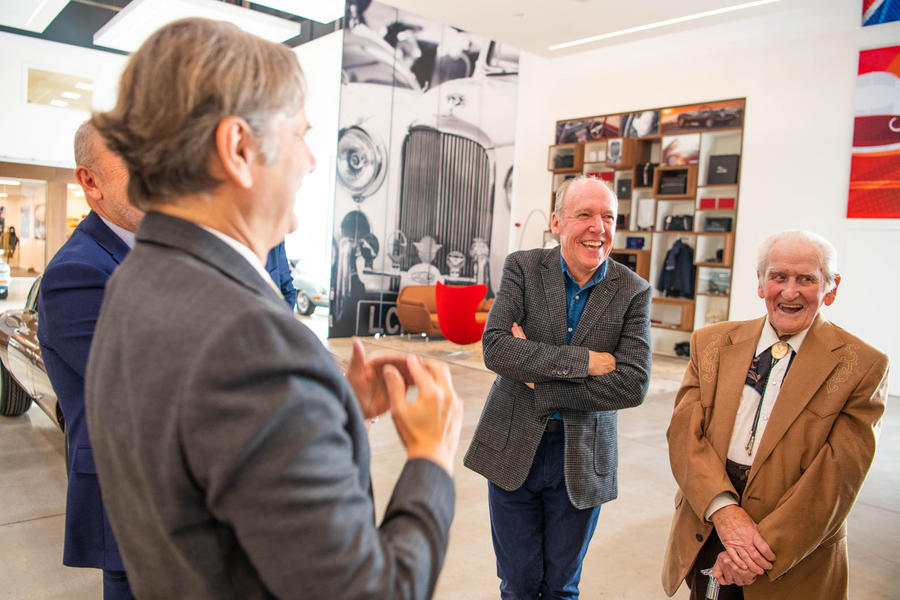 It’s a gathering of the usual Jaguar suspects: CEO Ralf Speth, whose determination put this magnificent place on the map; Mike Cross, who aims to make every new Jaguar a driving classic; Callum and his all-important I-Pace; and Tony O’Keeffe, Jaguar master historian who will walk us through the latest revived and recreated cars and show us JLR’s amazing James Hull car collection. Our host is Tim Hannig, who runs this place day to day. These men are the successors of Bill Heynes, Bill Lyons, Malcolm Sayer, Lofty England and Bob Knight, who made Jaguar great in the first place. Dewis was one of them.

Suddenly he’s with us. A diminutive figure – whose secret weapon was that, in an era when nobody cared about race driver comfort, he fitted every car – Dewis remains impressively mobile and ‘on the button’. He’s immaculately dressed, sporting his usual custommade walking stick topped with a large chrome Jaguar ‘leaper’, and ready to go. 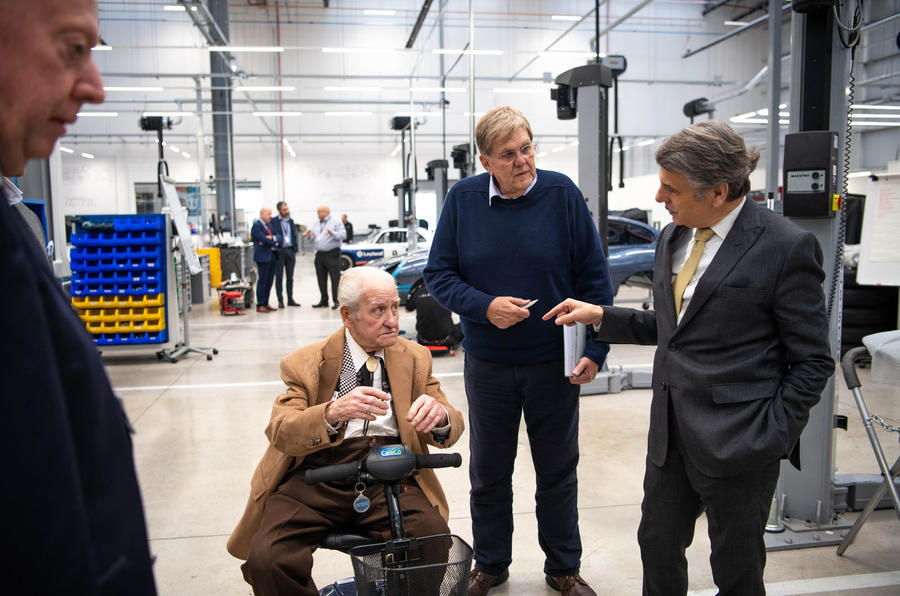 Alone among us, Dewis has a direct connection with Jaguar founder Sir William Lyons, so while we’re all sipping tea, I ask him a cheesy but sincere question: what would Lyons have made of this place? The answer instantly shows the intimacy of his relationship with the old founder.

“Sir William would have turned half of these lights off, for a start,” he says, indicating the LEDs and spotlights flooding wall displays, cars and the JLR shop. “He was always keen on saving money and he’d have said daylight was good enough.” But we also soon agree that Lyons’ well-chronicled parsimony worked to customers’ benefit as well. Whenever Jaguar launched a car, rivals would wonder how on earth this upstart British company with the annoyingly quick Le Mans cars could pack so much sophisticated engineering into such affordable packages… 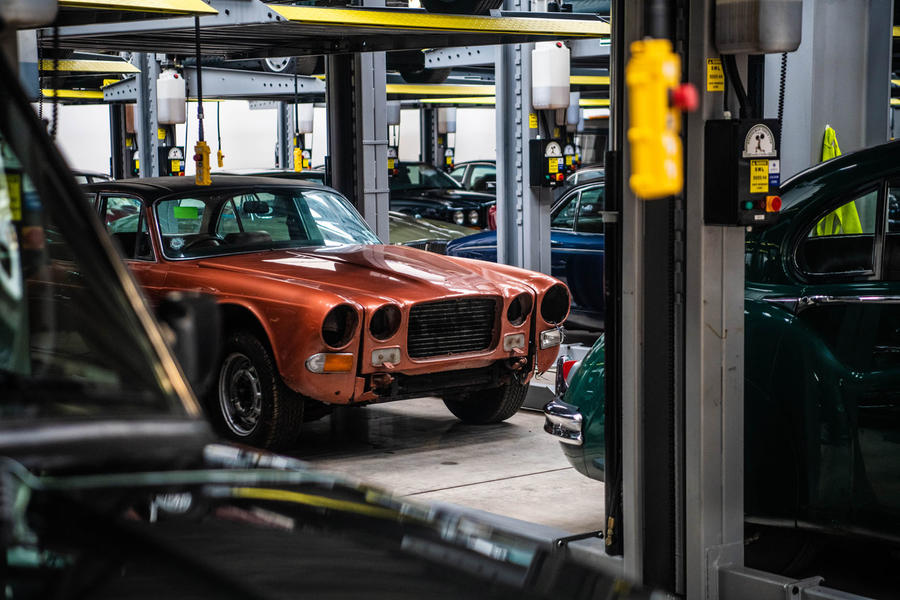 We walk through the works, clocking XJ220s in for servicing and reborn D-Types. Nearby, new and old Land Rovers and Range Rovers are getting the treatment. This place has rapidly become the country’s classic headquarters but Hannig tells us passionately how sheer output is no substitute for quality. “We have to do things perfectly,” he says. “Our customers come in all types, but they’re used to class and quality. That’s what we have to deliver.”

Everything we pass – workstations, tool kits, parts stores, the uniforms of technicians working on cars, even piles of mile-heavy components removed from restoration cars – reflects this sense that any customer who wanders by must be impressed. Not that ‘wandering by’ is encouraged: this workshop is a controlled environment and the best access is via its regular weekend breakfast clubs. 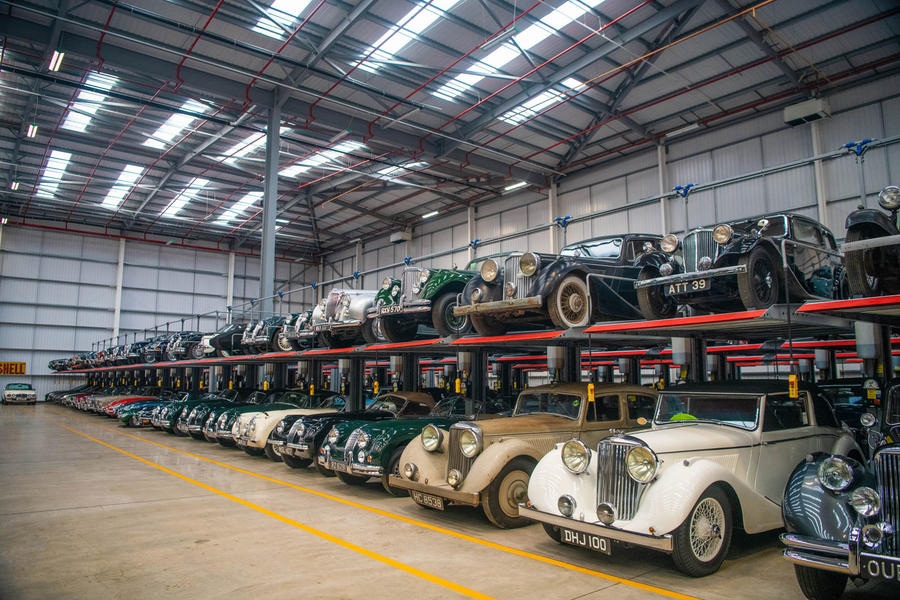 We progress to the James Hull Collection, an amazing array of British machinery, including 130 Jaguars, that JLR bought in 2014. Comprising 534 cars and offered initially at £100 million by Hull (who financed the acquisitions by building an empire of 50 dental practices), the collection has since sold 100-plus cars at auction and will sell more in future, gradually using the best ones as the bones of Jaguar and Land Rover heritage collections.

“This work must wait,” confides Speth, referring to the current perfect storm of slow diesel sales, Brexit and a weakened Chinese car market. “At the moment, we are not so wealthy…” 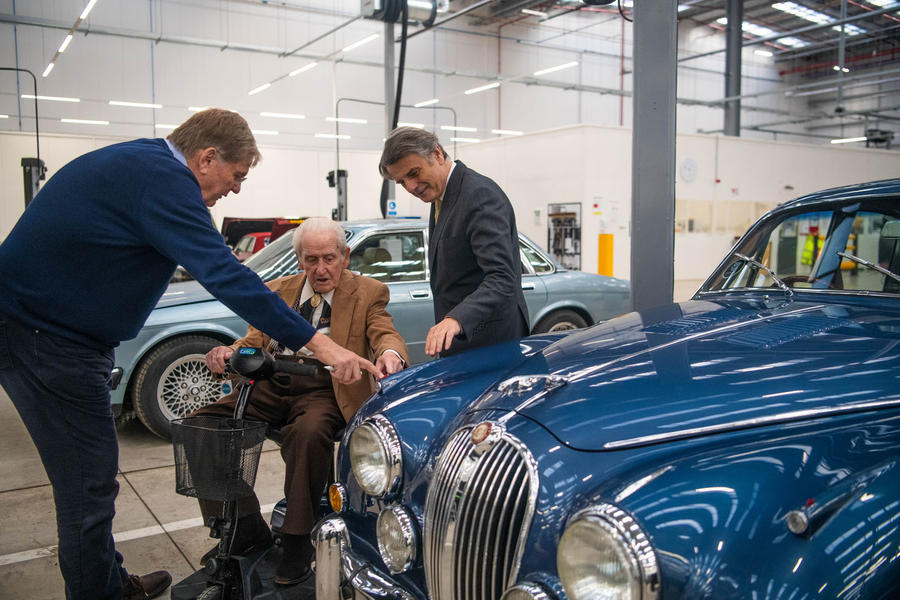 Dewis poses beside a healthy-looking early XK6 (a car he proudly recalls Mini founder Sir Alex Issigonis describing as “the best car in the world”) and then beside a gargantuan Mark 10 saloon owned by Lyons, which he drove a number of times in the wake of the founder, who often headed for West Country weekends at the wheel of one of Dewis’s prototypes.

Then we head outside to try the I-Pace, Callum and Dewis in front, me and photographer Olgun in the rear. It’s remarkable to see how 98-year-old Dewis drops straight into car tester’s mode, remarking on the I-Pace’s refinement, and instantly ‘getting’ the fact that this new brand of battery-powered silence aligns perfectly with the core values of near-silent Jag V12s he helped bring to life. 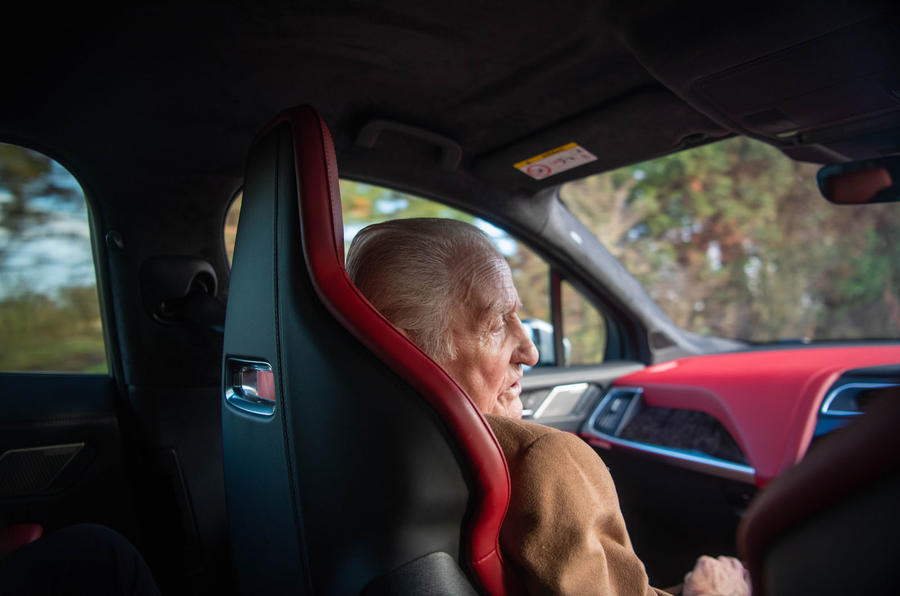 As we drive, his observations about road noise and low-end torque delivery at low speeds are all spot on. Very good car, is his bottom line, and perfect for its era. Which is just the way Dewis always liked his Jaguars.

The grand tour: which car factories you should visit​

The best jobs in motoring

I hope it survives the cuts!!!!

I hope this facility survives the planned JLR job reduction of reported 5000 jobs. There's a strong rumour that Castle Bromwich will close & the XE & XF will be axed, Defender & Discovery moving to Slovakia will mean that the Jag plant will not be needed anymore. The new XJ will be all electric & based on the next Range rover made in Sollihull. Sad news but it's the next decade will be a total game change as manufacturers move to electrification. (maybe the only Jags that JLR will be making in the future are those beautiful classics seen in this article)

A nice nostalgic article but defo one seen thru rose-tinted specs.

But it's always the same - 'Brexit', 'dieselgate' and 'China' always being mentioned in the same breath as Jaguar? China is a problem for all manufacturers and diesel - well as far as I can make out, the anti-diesel tale hasn't made it to luxury cars because the vast majority of this sector remains diesel powered. Indeed, most of the cars tested by motoring publications such as Autocar remain deisel powered. Diesel is certainly a concern but not to the extent that Jaguar make out.

The following is from a recent relaibility article in a sister magazine dated 30th Nov 2018:

Newer Jaguar XFs proved the least durable, with 36% going wrong. While some had issues with their engine, fuel system and gearbox, by far the most common issues were with the electrics.

So when Ralf Speth comes away with citing Brexit, China and dieselgate as being the reason Jaguar has less money, perhaps the journaist could have asked the CEO if the results of the survey have played any part in reduced sales?

Personally I think it's a theme that's been constent within the British car industry since Norman Dewis's day - it's always someone else's fault.

6 January 2019
Mr. Dewis seems to be much more durable than Jaguar cars. Keep on with good health