It’s mild and overcast at Thruxton circuit near Andover, Hampshire. The Met Office says afternoon rain is a 25% possibility. The usual dedicated crowd is pouring in for the third British Touring Car Championship meeting of the year – which means they’ll be seeing races seven, eight and nine of the series.

Today’s field has 30 cars divided among 10 marques, and following yesterday’s flat-out qualifying the first 20 are crammed inside one second. The field contains five former champions and 18 previous race winners, so tremendous racing isn’t just wishful thinking, it’s guaranteed. Today’s average speed will be 110mph-plus, and the cars will hit 155mph through Church corner, the fastest on the circuit. At Thruxton, there’s only ever one tyre compound used: hard. 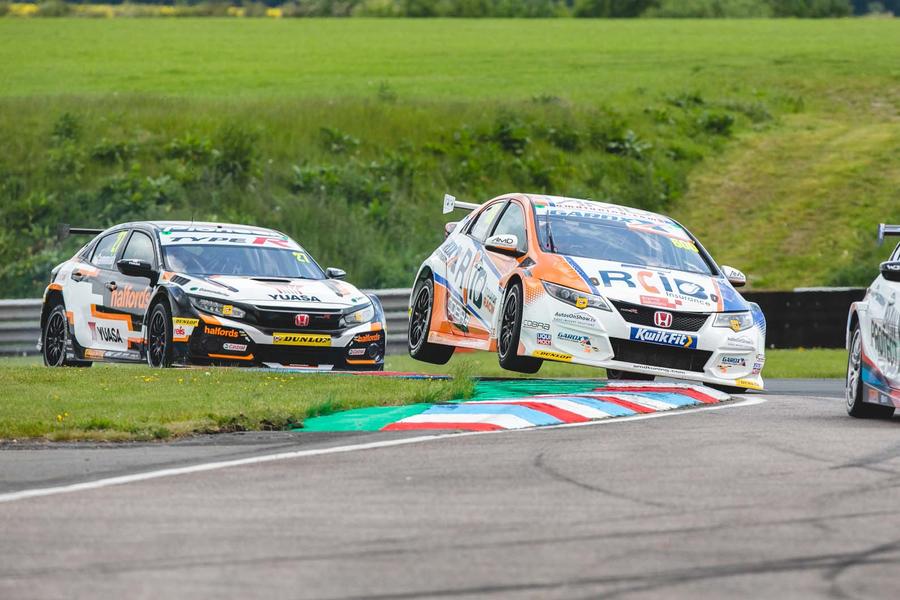 Given the guarantee of great racing, it’s ironic that we’re not here to watch it. Our mission is to discover how this event – like the rest of 2019’s 10 BTCC meetings – will be covered for an off-site ITV audience that usually builds to around a million a race if you aggregate audiences from the real-time race programme, highlights and online coverage.

We’re spending the day with TV anchorman Steve Rider, the face of televised BTCC for at least a quarter-century and a nationally recognised sports-programme personality since the 1970s when he sprang to prominence on BBC Grandstand and Sports Personality of the Year. Nowadays, the BTCC is Rider’s biggest gig and he pulls it off with a professional ease admired by everyone else in the same game.

My first call is the TOCA tent, prominent in the paddock just behind the ancient, creaky Thruxton race tower to which BTCC series supremo Alan Gow once ironically attached a fake British Heritage plaque. It’s still there. Gow has a reputation for running a tight ship and for being affable and direct – except when it’s necessary not to be affable. Behind the tent is the more exclusive and mysterious TOCA bus, to which errant drivers are summoned after ‘infringements’. Gow and a panel of experts use it to dispense brisk justice. 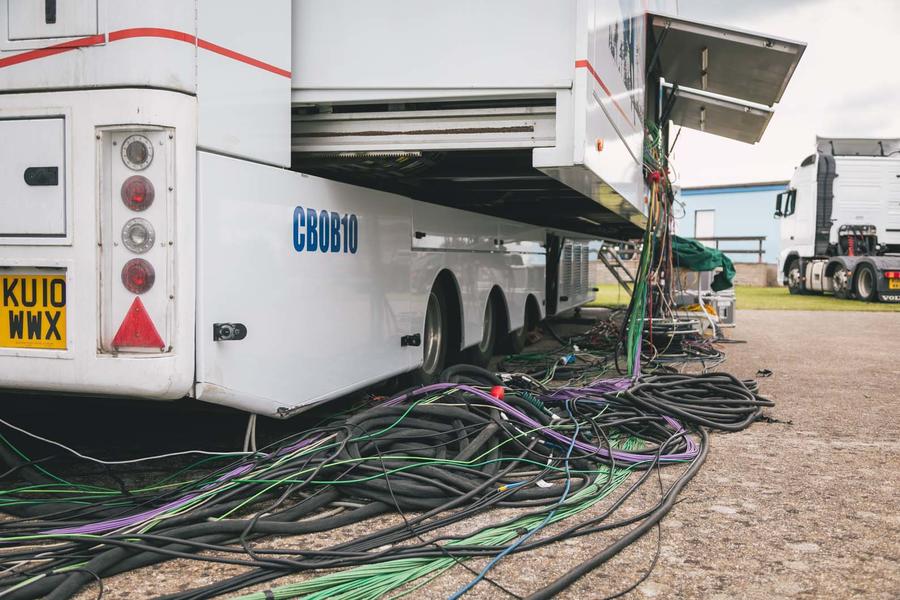 “Steve’s already here,” Gow tells me over a quick cup of tea. “He always arrives early. Probably in the truck.” The truck is shorthand for the £2 million outside broadcast units on site, stuffed with screens, control panels and preoccupied people, and united by cables as thick as the hawsers that hold the Ark Royal to a dockside.

Today, there will be a remarkable six and three-quarter hours of live or as-live TV on ITV4 – precisely timed to run between 11.13am and 5.59pm provided there are no crash delays. These happen often enough for Rider and crew to be well used to making changes on the hoof, even though they start out with a painstakingly written 38-page script with breaks scheduled to the second.

ITV has about 15 people on site. Everyone except Rider and his immediate crew will stay in the trucks and orchestrate coverage of the day’s three BTCC races but also the supporting Ginetta Juniors, F4 single-seaters and Mini Se7ens whose TV timings get shifted about to cover pauses for accident clear-ups. 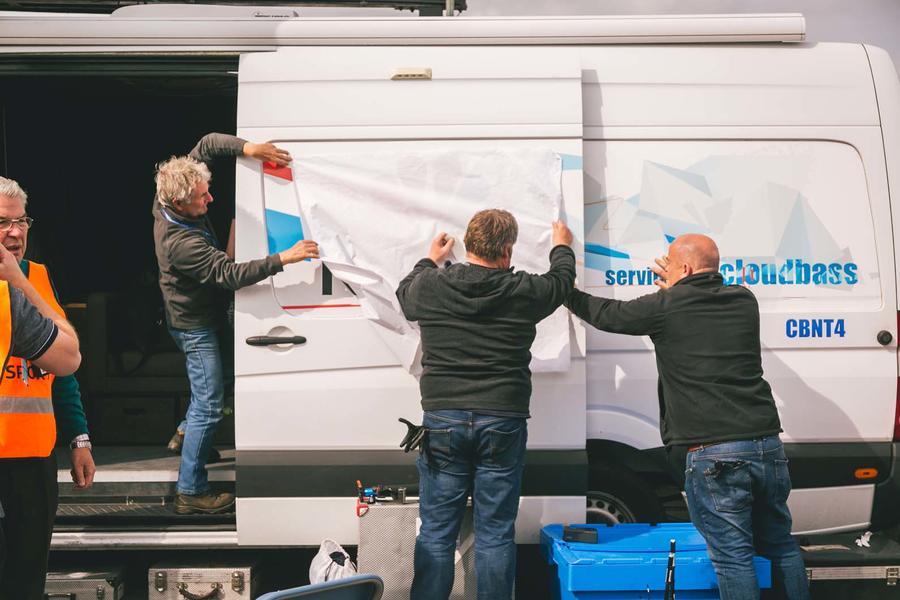 We run Rider to earth in a seasoned Mercedes Sprinter production unit parked just behind the control tower, adjacent to the starting grid. He uses it for preparing, interviewing people, writing bits of script that might be needed, talking back and forth to colleagues in the bigger trucks, grabbing lunch or a coffee and generally holding himself ready for anything. Today, he will mostly dive back and forth between track and van, with occasional transmissions from a rickety race commentator’s gantry above the van.

Rider turns out to be a thoroughly nice guy, friendly in the way of a person who meets far more people in a week than he could ever remember. He greets us with the famous smile and then, in that egalitarian TV way, introduces everyone else – the director, the cameraman, the sound man and the guy who always walks backwards with a video screen strapped to his chest so Rider and the director, David Francis, can see exactly what’s being transmitted. 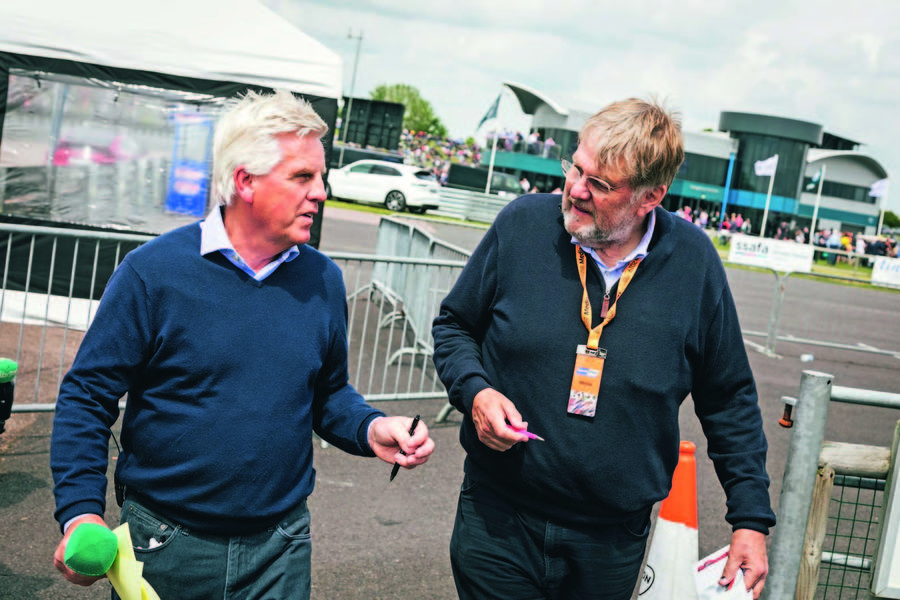 The small team has been briefed about our presence and is cool. I’m keen to get Rider talking about the slings and arrows of the job – he has a huge reputation for being nerveless in really difficult situations – but he’s not a man to spin yarns. We chat about cars, the weather and Formula 1 (he was anchor to commentating legend Murray Walker), but hardly a syllable passes about the rigours of commentary. “I guess you see most things, over the years,” he says mildly. “You learn to survive them.” Good commentators, Rider believes, aren’t part of the story.

He’s a bit preoccupied just now, anyway, because today’s 406-minute magnum opus is getting close. There are intro pieces and links to prepare before transmission starts at 11.13am and it’s already 10.30am. Rider also has a couple of friends along for the day and they deserve a walk through the grid. 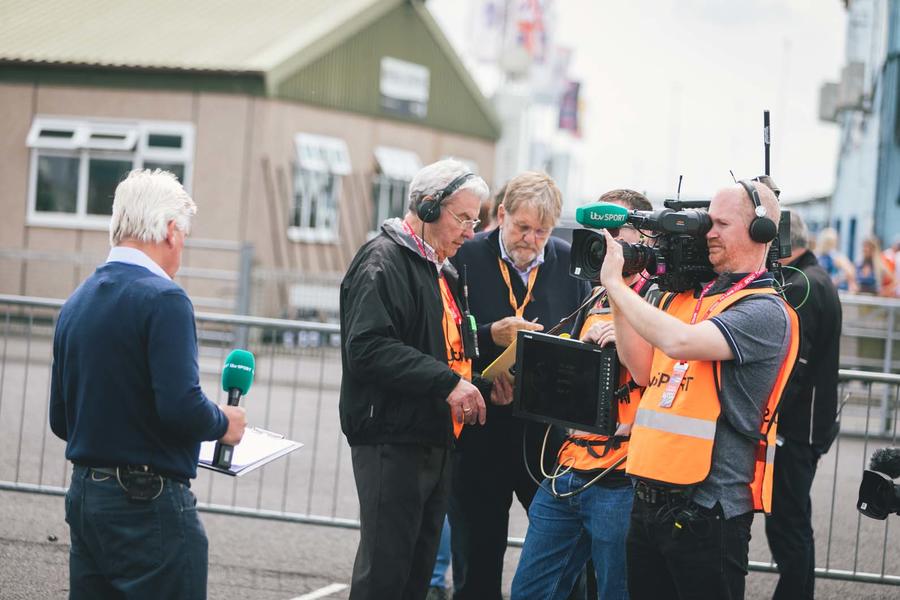 Five people are involved in presenting today’s TV show, all busy. I suddenly perceive the need for a variety of faces and voices to maintain viewer interest as I’ve never done before, and to swap quickly to new locations and interview subjects. Rider gets along cheerily with pit-lane reporter Louise Goodman, also well known from F1. Course commentator David Addison bobs up now and again: the races are excitedly described by him and former racer Tim Harvey, with driver Paul O’Neill chiming in at times.

Serious work starts in the van on voiced links. Rider doesn’t seem to need to rehearse; he just does it. Then it’s onto the gantry, and the grid, to introduce the whole programme: “Welcome to the third meeting in the battle for the 2019 Kwik Fit British Touring Car Championship, first of our two visits to the famous old airfield circuit of Thruxton in Hampshire…” The familiar voice rises and falls perfectly, with effortless command of the facts and none of that awful, false emphasis so many of today’s presenters employ. No wonder Rider is welcome in so many living rooms. 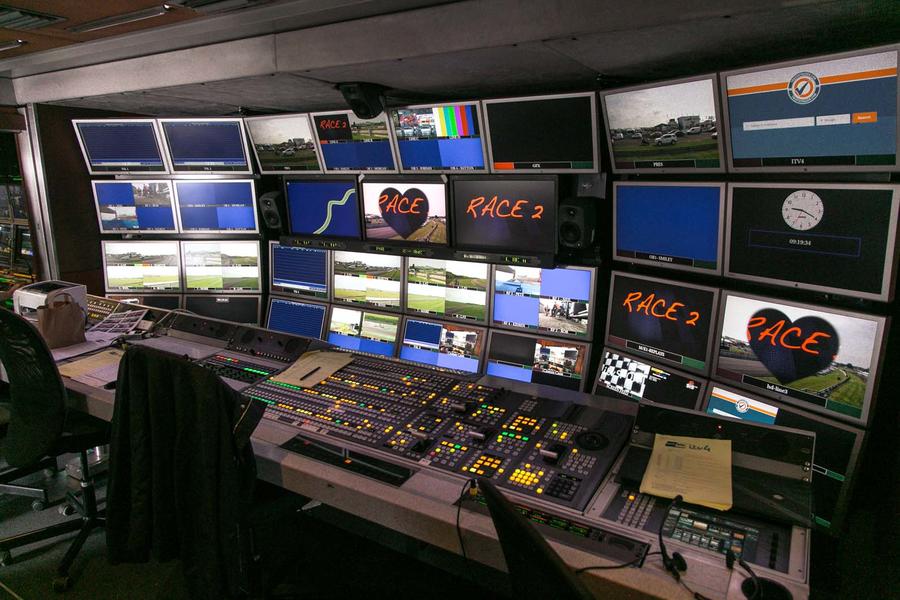 Transmission begins precisely at 11.13am and 30 seconds and sets off at what – when you see the moving parts – seems a furious pace. It becomes clear one of the biggest challenges of the day is this pre-care, scene-setting hour, because in the beginning you don’t have much to describe. So we’ve heard the inside story of today’s races, of yesterday’s qualifying, seen the success ballast table, know who has the strong prospects and who’s currently leading the championships (of which there are several, for drivers, teams and independent entries).

Within half an hour, the day’s timetable has been laid out, we’ve had two commercial breaks (totalling 9min 30sec) and there has been time for an obituary for Tommy Sopwith, who won the first-ever British touring car race in 1958 and has recently died. We’ve even had a promo for ITV’s coverage of the French Open tennis. Goodman runs a feature about women in motorsport, then Rider and O’Neill chat to Renault racer Jade Edwards about how it feels to beat the blokes. On and on it flows, seamlessly, as far as I can tell. 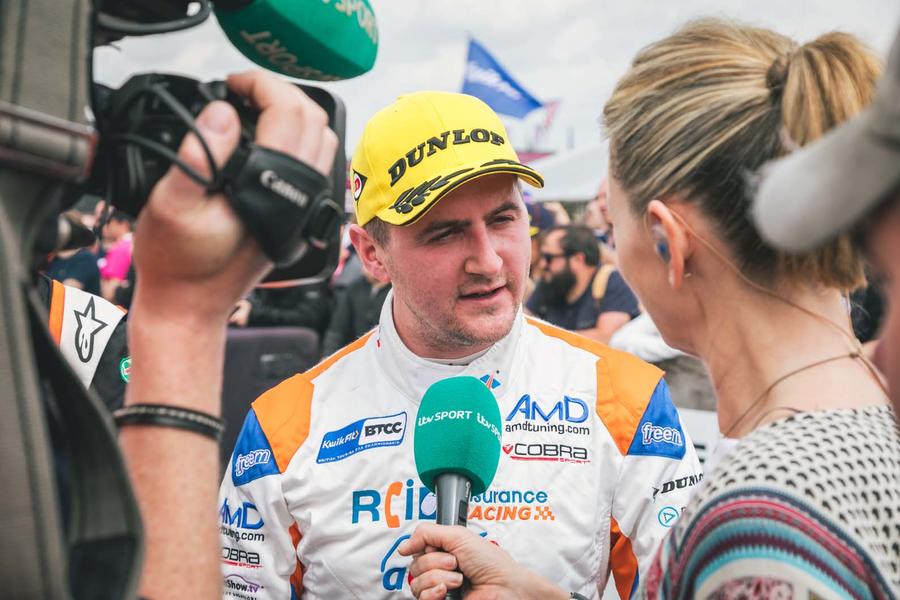 When we get close to the first race at 12.10pm, it’s almost a relief. Goodman does one of her well-practised grid-walks, chatting comfortably with the drivers, who seem far more friendly than the F1 crew. Then it’s the flag lap, then the race begins. Andrew Jordan compensates for a Donington crash by winning for BMW by 1.34sec. Thruxton is viewed as a Honda circuit, so this is big.

Coverage seems to get easier. The crew grabs lunch, never losing sight of proceedings as the Minis, F4s and Ginettas do their stuff. Rider and Goodman interview the podium finishers sympathetically. Then Jordan takes an easy start-to-finish win in the second race. There have been no delays this afternoon; it’s dry and things have been going well. When we reach the third and last BTCC event, the effects of a punitive starting position and two safety car hold-ups move two-time winner Jordan back to a distant 16th, leaving the win to Honda-mounted up-and-comer Josh Cook. Interviews follow but, instead of bothering with the minutiae of who has won and how, I watch Rider’s summary of “a great weekend” to tease out his secrets. The rules are simple, and I count five. 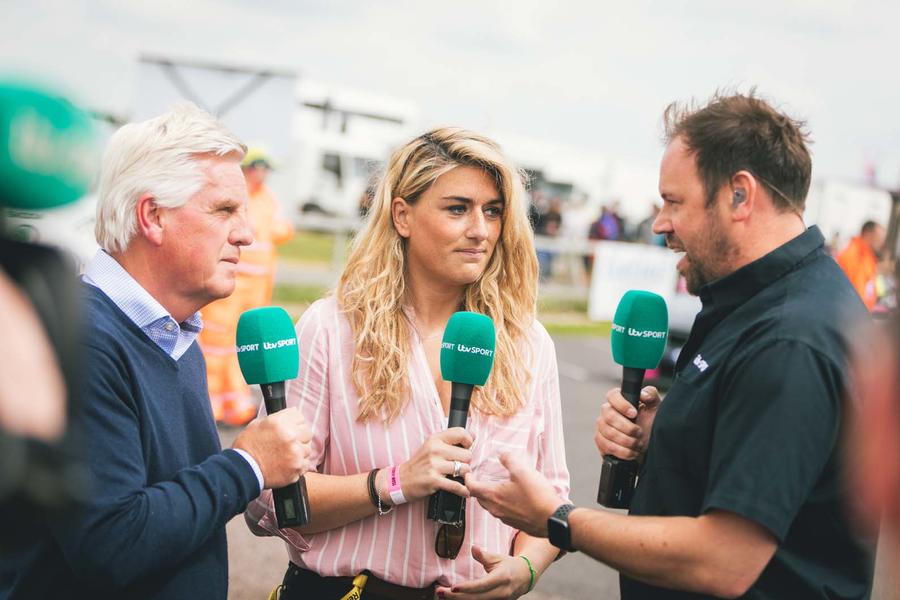 First, you have to be honestly interested in your interview subject, however old, young, unhelpful or downright weird. Stay friendly, maintain eye contact and you’ll get good answers. Secret two: ask questions that show you’re well informed, and supplementaries that do it again. That’s Rider’s absolute speciality.

Third, frame your questions quickly, and encourage succinct answers with the word ‘briefly’. Fourth, stay calm and good humoured. Anxiety can be catching. Fifth and vitally: remember, Mr Interviewer, that this isn’t about you.

It’s 5.30pm. I’m exhausted from watching this performance, but Rider looks exactly as he did on arrival: relaxed and without a bristle of his much-admired silver barnet out of place. Not sure how he does it, given his next birthday will be his 70th, but as long as he keeps doing it, that will suit us BTCC punters just fine. 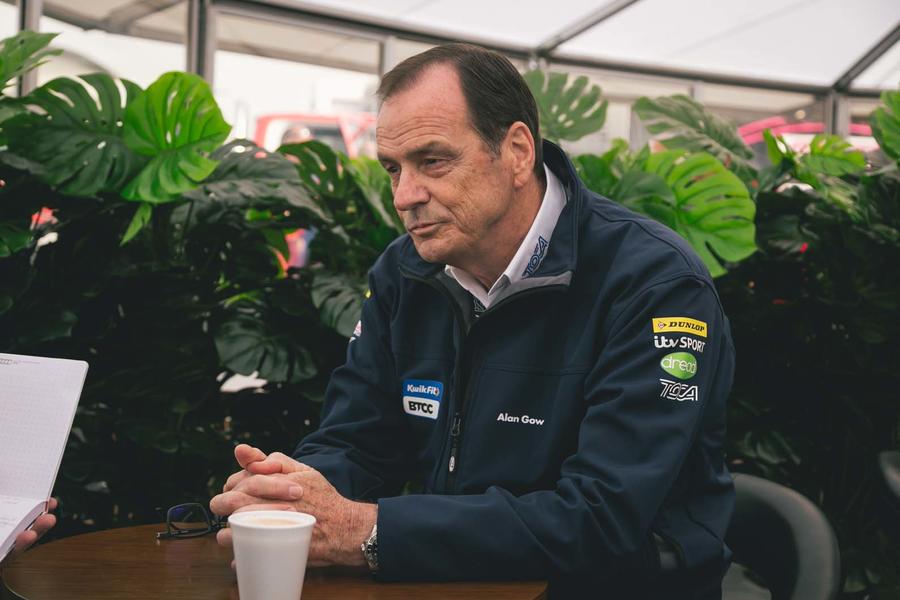 “I’ve known Steve Rider since the 1980s,” says BTCC boss Alan Gow. “He was always a motorsport enthusiast, a bit of a petrolhead. His involvement with us just sort of happened. He pushed our cause back then, and he’s been doing it ever since.

“When we took over TOCA in 1992, he was with BBC Grandstand. They showed 20 minutes of highlights – between the snooker and the horse trials, sort of thing. Steve wanted to do live slots, but I wasn’t keen. The good thing about highlights was you could cut out the boring bits. But Steve kept on. The thing evolved into 20, then 40, then 60-minute items.”

Gow now greatly values BTCC’s day-long, free-to-air coverage on ITV4, and he has figures to prove the public loves it. He’s had offers from subscription services but prefers ITV4. “It’s about eyeballs – I want what’s most important for my sponsors and teams,” says Gow.

Getting amateur racing back on track with motorsport's new boss​

Cosworth will provide hybrid technology for BTCC in 2022​

We seldom think about the

10 August 2019
We seldom think about the process behind the cameras before the picture appears. And it's very interesting! So thanks for sharing this feature! It combines my 2 big passions - sports cars and video recording/montage process! I am a part of the student directing community, so I am interested in lens and camcorders. And my dad says he will help to buy me a sports car if I will successfully finish my graduation. So now I often visite your site and also visite site for help with my research papers. Such services are like cameramen who create the most important part of the picture - but they create text content!
​Thanks for useful tips! I agree that 'you have to be honestly interested in your interview subject, however old, young, unhelpful or downright weird'. When you are sincerely interested in the subject, things go easy and the process is pleasant!