BACK TO ALL NEWS
Currently reading: Cosworth will provide hybrid technology for BTCC in 2022
UP NEXT
Two worlds collide: Porsche Taycan vs Alpina B3

Cosworth will provide hybrid technology for BTCC in 2022

British Touring Car Championship organiser TOCA has announced that Cosworth Electronics will supply hybrid powertrains for the race series from 2022.

The new technology will be integrated into the competing cars’ existing 2.0-litre turbocharged powertrains, to keep costs down, and will be used primarily for passing and defending manoeuvres on track. But cars will also operate in full-electric mode in the pitlane.

The system will allow the BTCC to forego its current ‘success ballast’ system from 2022. Instead of race winners carrying more weight in their next outing, their hybrid usage will be more tightly restricted. 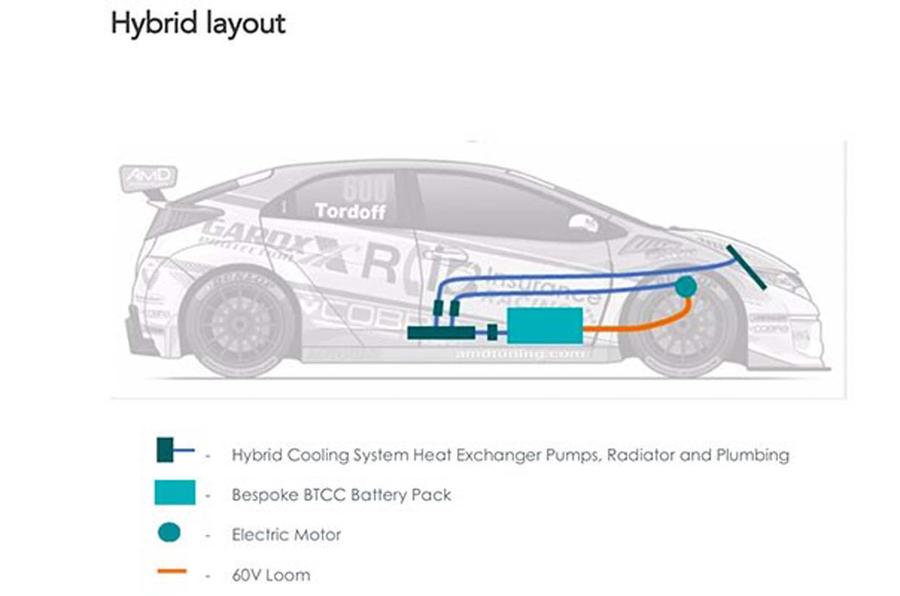 Cosworth Electronics, a subsidiary of renowned engineering firm Cosworth, won the tender having demonstrated it could meet the packaging, performance and cost requirements outlined by TOCA.

The compact 60-volt system comprises a gearbox-mounted electric motor and separate cooling unit. A bespoke battery and its associated hardware, alongside modifications to the gearbox and ancillaries, entails an estimated 64kg weight gain for each car.

Early tests have shown that the most significant performance boost comes at the bottom of the rev range. The BTCC claims “the hybrid power burst will bring the engine up into the turbo ‘window’ more quickly”. Activating hybrid mode will temporarily add approximately 40bhp to a car’s power output, claims the BTCC.

A simulation based on Silverstone revealed that a hybrid-equipped racer would accelerate faster out of Copse Corner than a conventionally-fuelled current model.

Drivers can control how much energy they recuperate and deploy throughout the race, with a steering wheel-mounted button that engages and disengages the hybrid motor. The system will also deactivate under braking, when the pre-determined time limit has been reached or when throttle input changes suddenly.

The BTCC is conducting tests to determine the exact rules of hybrid technology usage in races, but has confirmed that it cannot be deployed for more than a total of 15 seconds per lap.

The competition’s shift to electrification was first announced in 2018, with testing scheduled to get underway as early as next year. The BTCC says hybridisation “could have been introduced from 2021” but “it was decided to stay with the original 2022 introduction date in order to allow ample preparation”.

The story of Silverstone's surfacing disaster

What is the benefit?

This will just make the cars heavier and more complicated - and it won't be a performance differentiator. So presumably the only benefit is that the Series can be seen to be green(er), though I suspect that the fuel consumed by each car will not be much affected. And it seems daft to be bolting on such a crude system to cars like the Toyota which have a sophisticated, well developed and more powerful hybrid system on production models.

Frankly, it would be more interesting if the system was optional. Then it would be interesting to see if the intermittent use of an extra 40 horsepower would be sufficient to offset the extra weight and associated tyre wear and braking issues when energy is recovered.