BACK TO ALL NEWS
Currently reading: How one enthusiast built the ultimate kit car for £5750
UP NEXT
2021 Kia Sportage: reinvented SUV priced from £26,745

The petite car you see here is not a pre-war Italian racer but a kit car built in a Kent garage. We meet its maker
Open gallery
Close
Share story

The view forwards is pure Fangio. A single pane of laminated glass set in an aluminium frame through which I can see a narrow bonnet and exposed wire wheels. My hands are on a wood-framed steering wheel with four alloy spokes and a stubby gearlever is to the right of my leg. White-faced instruments sit in an aluminium panel. It’s very simple.

Although I’m in a single-seater, there’s plenty of elbow room. I could do with the pedals being a bit closer, but unfortunately the seat isn’t adjustable because this car has been set up for its owner, not a guest driver.

I first saw this car last summer at a Vintage Sports Car Club meeting at Brands Hatch, where it was parked in a line of kit cars outside the shops near the Kentagon pub. From a distance, I thought it was an Alfa Romeo 159 Alfetta, because it had a very similar egg crate grille. But as I got nearer and saw numberplates and indicators, I didn’t know what it was. Whatever, it looked fantastic. Fortunately, in front of the car was a sheet of paper explaining all. A special, it transpired, built by a bloke called John Nash: a member of the Kent Kit Car Club, whose display it was part of. 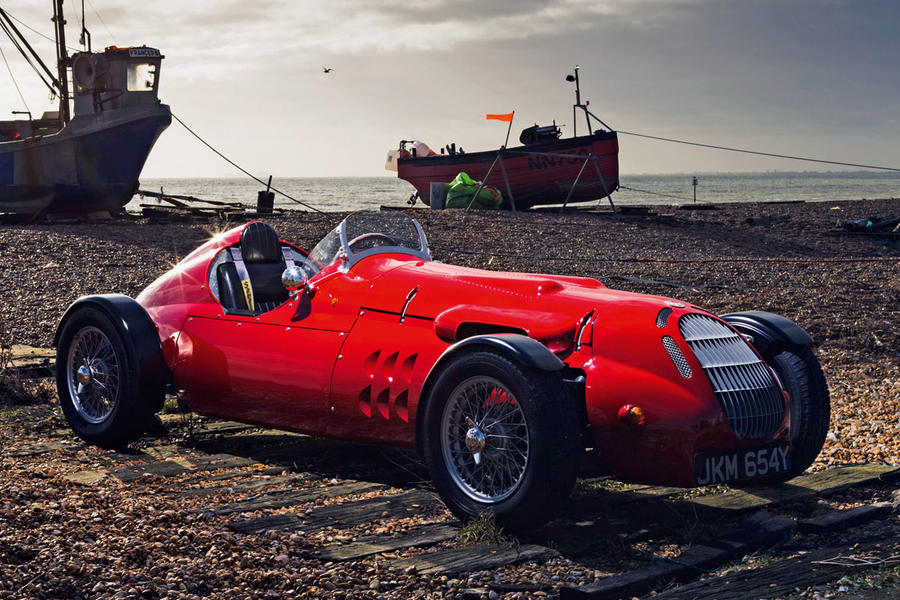 I missed two races waiting for the owner to turn up. Why? First, because I wanted to congratulate him on his incredible workmanship. I’ve spent a lifetime peering at kit cars and specials and have never seen one so beautifully finished as this. Second, because I wanted to know what lay under the skin of the JNS Special. A Jaguar engine? An Alfa twin-cam? And, finally, I wanted to know how the hell Nash had managed to build such a wonderful-looking machine for less than six thousand quid.

Eventually he arrived, explained that he’d built it from scratch over five years and that it had been inspired by pre- and post-war grand prix cars. And that it had indeed cost only £5750 to build; 7000 man-hours had gone into it – and nearly one marriage.

Several months later, we’re examining the JNS in Nash’s garage in Hythe. It’s not the first car of his own design. “I built a three-wheeler that looked fairly similar,” he explains, “but quite a few of my friends said that it would look a lot better with four wheels. I first thought about modifying it but realised pretty quickly that it would be simpler to start from scratch.”

With the bonnet off, the powerplant is revealed, and it’s not what I’d expected. “A club member had a couple of ropey Renault 5s going begging, one of which was a Gordini Turbo. I managed to buy the pair for £200 and chop them up in his barn, taking away the bits I needed. 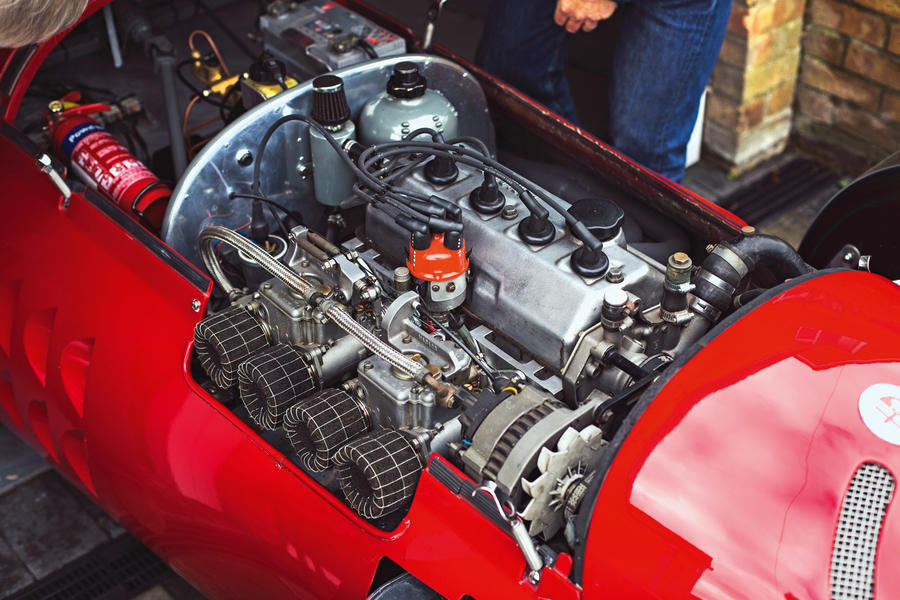 “Building a rear-wheel-drive car is complicated because you need room for the propshaft, so I reckoned that it would be a lot easier to simply use one of the Gordini engines as it was fitted to the Renault: longitudinally-mounted with the gearbox in front. I was able to use all the Renault driveshafts, wishbones and torsion bar springs, plus brakes and hubs.”

Nash spent a long time fiddling with the turbocharger. It sits in front of the engine in the Renault, but he wanted to position the JNS’s radiator in a way that would achieve the low and narrow bodystyle he wanted: “Eventually, I came to the conclusion that having a turbocharger was just asking for a load of trouble, so I junked it and modified the engine with higher-compression pistons to restore the horsepower lost.”

How Nash managed to build such a lovely machine on such a small budget is a combination of doing virtually everything himself and using a lot of lateral thinking when it came to sourcing parts. “Some of the critical welding I farmed out to experts,” he says, “like the rear trailing arms. They’re from a Citroën 2CV, but I needed to shorten them because the rear wheels would have been too far back without doing so. I made all the moulds for the fibreglass body and made the panels, but I got a professional to paint them.” 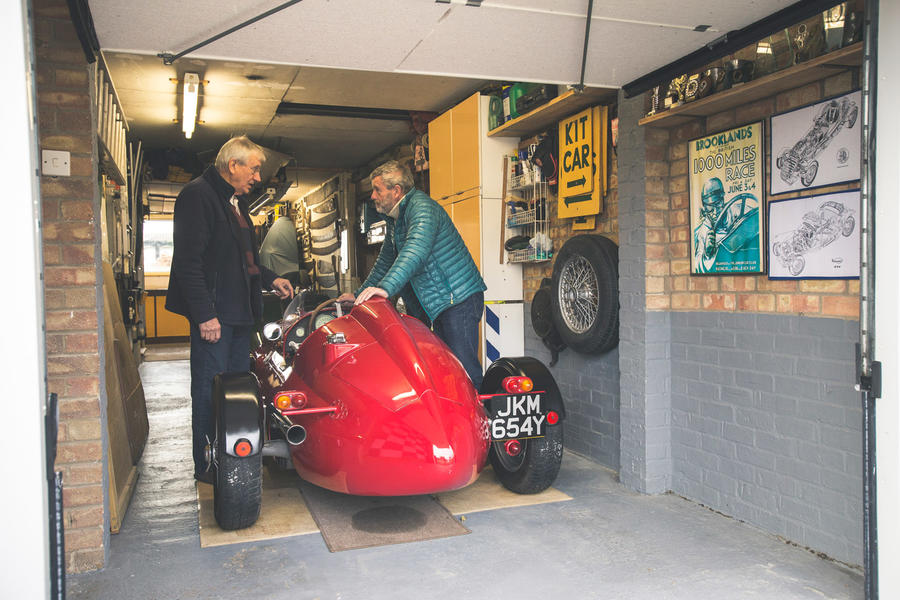 When I first saw the JNS at Brands, I was sure I was looking at the work of a man with an engineering background as well as some experience of design. “I did an engineering apprenticeship,” explains Nash, “but I ended up doing technical drawings for what was the Central Electricity Generating Board and, before I retired, illustrating operations manuals at Dungeness Power Station.” That explains it, then. As does the beautiful cutaway of the JNS on the garage wall, drawn by its creator.

Driving valuable supercars never bothers me. One-off concept cars are a bit more of a worry, because they cost millions and often years of work to make. But they’re still owned by big car companies. Driving the JNS is much more worrying. I’ve had it insured for £30,000, but it’s not the money; it’s the time it would take Nash to rebuild it if I stuffed it.

So I shall be damned careful. I’m sitting in a wide seat that was once fitted to a Vauxhall Viva. Those white dials came from a Triumph Dolomite (£10); Nash fitted the faces and made the numbers using Letraset. My feet, when they’re not resting on the chequer plate aluminium floor that came from a toilet (£5), press pedals from a Triumph Spitfire.

The now-naturally aspirated Gordini engine breathes through a pair of Weber DCOE carburettors that Nash already owned, but he made the air filters from a sheet of foam and chicken wire. You don’t want to buy expensive K&N filters when you can make some for a few quid. The engine sounds excellent: not loud, with just the right balance of noise from induction and exhaust. 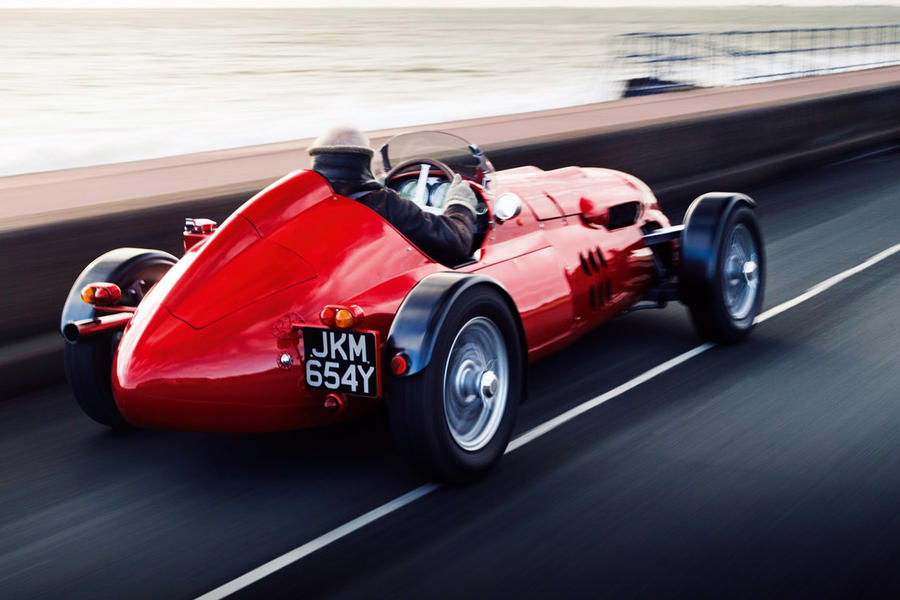 How do you criticise the work of such an enthusiast? Easily when there’s not much to fault. I’d rather there was less travel in the brake pedal and I might not have used a servo, plus there’s a fair bit of slop in the gearlever. Nash has tried to sort that out but reckons he’s got it as good as he can. These are just niggles; the overall dynamics of the car are quite extraordinary for a home built and designed machine.

The steering is wonderfully direct yet light and, because the engine makes only about 110bhp, there’s no torque steer. Best of all is the ride: it’s very pliant and comfy. At just 580kg, the JNS is plenty brisk enough.

Nash has been to Le Mans and back in his car with no problems. I can only imagine the pride he must feel every time he opens his garage door and sees that egg crate grille.

What a fantastic bit of fun.

What a fantastic bit of fun. It looks great as well as apparently driving great, a job very well done!
Hughbl 15 March 2020

I love how he has bodged it together from old parts, but it still looks incredibly professional. Well done sir!