BACK TO ALL NEWS
Currently reading: High-end hatches: Audi A3 vs BMW 1 Series vs Mercedes A-Class
UP NEXT
EV start-up Aehra to launch “ultra-premium” SUV and saloons

High-end hatches: Audi A3 vs BMW 1 Series vs Mercedes A-Class

Does the original posh hatchback remain ahead of its rivals for the new generation?
Open gallery
Close

Chances are you’ll instantly recognise each and every one of those names. I’d wager that it’s also likely you’ll have a rough understanding of the common thread that ties them all together, too. Undoubtedly, they’re all legends in their respective fields – imposing names attached to outstanding individuals who have cast exceptionally long shadows over the worlds of music, art and sport. These are figureheads with whom all promising newcomers will inevitably be compared in some capacity as they rise through the ranks of their chosen profession.

Now, I reckon that if you do a small amount of mental contortionism, you could probably add the Audi A3 to that list. You see, in the car world, it’s the model that arguably kick-started an entire genre: that of the premium family hatchback.

Over its first three generations, the little A3 went on to do pretty great things for the brand from Ingolstadt. Not only did it tally up some 600,000 sales in the UK alone but also, over the course of its 24-year existence, it established itself as the benchmark that all contenders needed to reach if they were to be taken at all seriously.

Solid refinement and a dynamic character that was stereotypically Audi in its stability and security were crucial contributors to the A3’s success over those years. But arguably more than anything else, it was the hugely successful way it showcased how a relatively small, reasonably affordable family hatchback could offer the sorts of outstanding levels of material and design appeal that had previously only appeared in cars of a larger footprint sold at a higher price point. 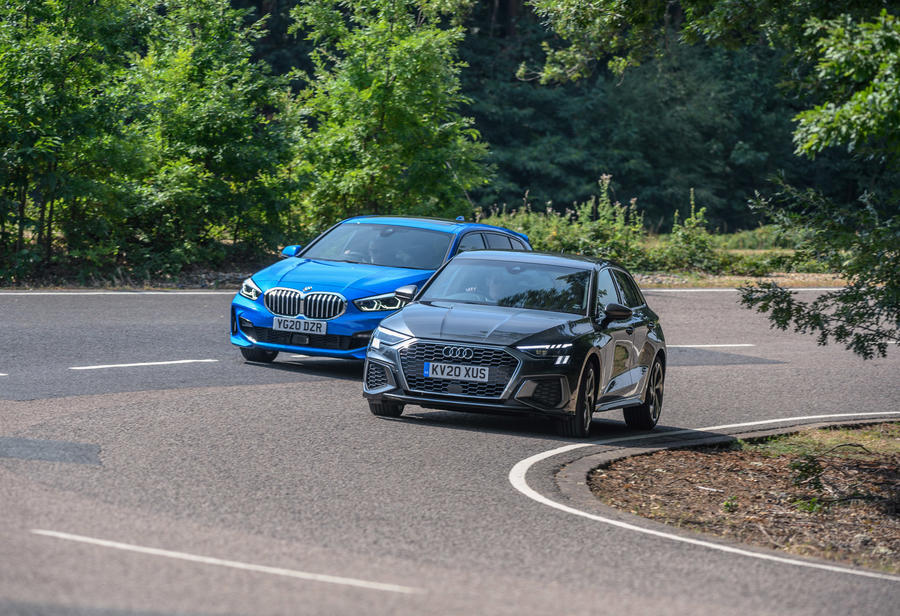 Indeed, the shadow cast by its success was a long one. Now, with all of the apparent slickness of a Usain Bolt baton handover, a new, fourth-generation model has arrived to maintain its predecessor’s place at the top of the table. At least, that’s the plan. It sits on an updated version of the Volkswagen Group’s ubiquitous MQB platform, sporting a handsome but conservatively evolved new look, multi-link rear suspension and a heavily revised interior.

A mild hybrid, a couple of plug-in hybrids and decidedly more raucous Audi S3 and Audi RS3 performance models are due to pitch up at some point in the near future, but for now, Audi offers the A3 with a choice of a 148bhp 2.0-litre four-cylinder diesel engine or the 148bhp 1.5-litre turbocharged four-pot petrol tested here. On the surface, at least, it seems the A3 is in a prime position to continue the success of its predecessors.

Only it’s never that simple, is it? Not when the Mercedes-Benz A-Class is arguably at its most accomplished level yet, in its sleek fourth generation, or when BMW’s new front-driven 1 Series has solved so many of the packaging problems that the old rear-driven architecture historically created yet retained a healthy level of dynamic prowess in the process. 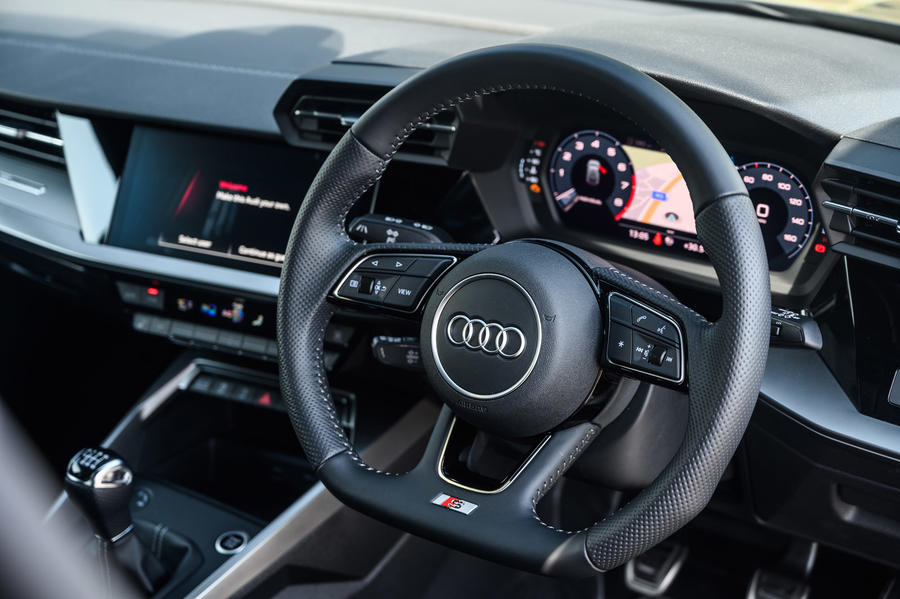 Rather unfortunately for Audi, it doesn’t take very long at all for you to realise that, in terms of the interior design appeal and apparent build quality for which the A3 has always been so highly regarded, this new model has dropped the ball a bit.

The view from its admittedly comfortable and appreciatively adjustable driving position just isn’t as impressive as it once was. Sure, the Virtual Cockpit and 10.1in touchscreen infotainment system (standard even on entry-level A3s) inject a healthy dose of technical appeal into the cabin, but from a materials point of view, it seems that a fairly conspicuous level of cheapening has occurred as well.

Whereas the A3’s dashboard was once an example of clean, effective minimalism and solidity, there are now vast swathes of shiny plastics that sound hollow to the touch and, along with some more hard and scratchy plastics on the doors, contribute to an overall look that comes across as a step backwards – which is a real shame, even if it might not be a deal-breaker in the mind of Joe Public.

Nevertheless, of the three cars here, it’s the A3 that feels the most spacious, offering up more comfortable amounts of second-row head and leg room than either the BMW or the Mercedes.

Speaking of which, the 1 Series and the A-Class seem to take opposing approaches to the field of interior design and, superficially at least, it’s the A-Class that packs the biggest punch in terms of wow factor. Its stepped dashboard, turbine-style air vents, choice materials and crisp twin digital displays all inject a healthy amount of perceived quality into its cabin. But dig a little deeper and it too begins to slide; a few pokes and prods are all it takes to reveal the odd creak or groan as surfaces flex beneath your fingers. And despite its comparatively large footprint (it’s the longest car here), its second row feels notably tighter than the other cars’. 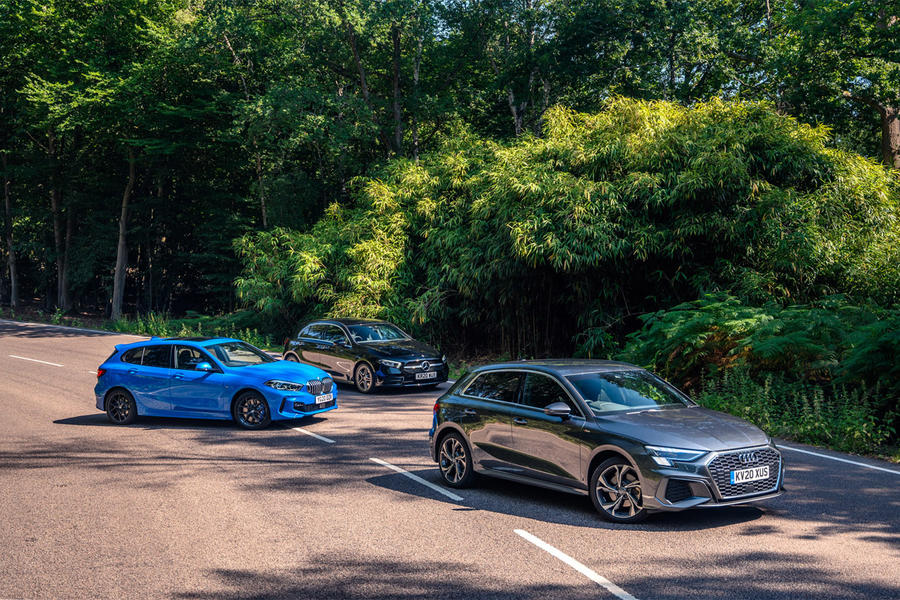 Conversely, the 1 Series looks relatively plain from behind its typically thick-rimmed M Sport steering wheel, yet it promotes a level of sturdiness and tactile appeal that’s lacking in the Audi and the Mercedes. By shifting onto Munich’s UKL2 architecture, the 1 Series now has far more space to offer as well – no bad thing when you remember how cramped the old rear-driven models felt. The pay-off is that while the 1 Series comes up a bit short on visual pizazz, it’s also the car that’s the nicest to spend time in.

Round one goes to BMW, then, but an attractive and practical interior is only one discipline in which a successful premium hatchback needs to succeed. On-road performance and refinement are of even greater importance, and it’s here where the three cars most noticeably begin to differ in approach.

For outright comfort and bump isolation, it’s the A-Class that gets the nod. Its comfort-orientated suspension lends itself very well indeed to motorway driving, but its notably pliant, softly sprung set-up does act as a double-edged sword. On fast B-roads and with heightened levels of vertical and lateral forces working against it, the car begins to feel loose and comparatively lacking in outright composure, even if it nonetheless grips well and has a likeably weighted and accurate steering rack.

It’s easily the quickest of our trio, with strong mid-range acceleration, but a comparative lack of refinement under load (particularly at higher engine speeds) and an automatic gearbox that can be a bit twitchy and overly willing to kick down under partial throttle inputs are downers.

By comparison, the 1 Series, on its stiffened and lowered M Sport suspension, feels far more tied down and controlled than the A-Class yet doesn’t give up huge ground when it comes to outright comfort. Sure, it doesn’t yield quite as readily as the A200, and there’s more road roar generated by its 225-section front tyres, but there’s an appealing sophistication to the way its springs and dampers iron out compressions and control weight transfer laterally through quick corners.

The only trouble is that while its steering feels appealingly sporty in its gearing and it turns in to corners with a heightened level of initial keenness, it suffers from a bit of a shortage of front-end bite. That said, slip is manageable enough and might have been a product of the 35deg C heat on the day of our test. I certainly don’t remember the 1 Series behaving like that when we tested it last year.

Even so, it served to sap a degree of confidence and left an impression that the BMW isn’t quite the standout driver’s choice the propeller roundel on its nose suggests it should be. Its three-pot motor is also a touch rough at idle and very low crank speeds, although spin it up and it showcases impressive refinement, if not outstanding punch or exceptionally slick gearbox dexterity. It’s fine in both regards but nothing more. 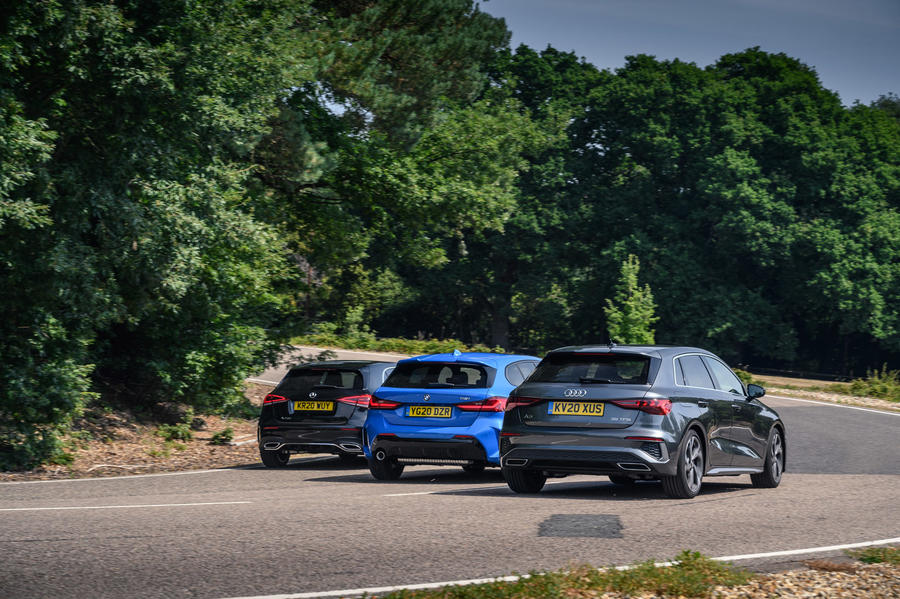 And the A3? Well, Audi may have pulled money away from interior development, but it doesn’t seem like it has cut many corners as far as the A3’s on-road manners are concerned. Tauter than the A-Class in its vertical and lateral body control yet with a level of pliancy that makes it comfortable enough on poorer surfaces and around town, the A3 strikes an appealing dynamic middle ground between its two compatriots.

Front grip is strong and it takes a pleasingly neutral stance through fast corners, serving to bolster a level of confidence that’s already heightened by its intuitive steering set-up. Add lock and the rack weights up superbly, and while its responses aren’t as quick or as eager just off centre as those of the BMW, it’s accurate nonetheless.

Add a commendable level of poke, a slick (if slightly relaxed) manual ’box and a level of engine refinement that stands clear of the others’ and the A3 paints itself as an eminently likeable, if slightly bland, premium hatchback.

Depending on your priorities, you really could argue why any of these cars should stand atop the podium. But for the way in which it blends practicality, dynamic sophistication and superior refinement, victory has to go to the A3. It’s a narrow victory, though, and the temptation to knock it off its perch because of its downgraded interior was very real. Had the 1 Series generated a bit more grip, it would have snatched the win.

So, the A3 remains on top. But the shadow it casts is shorter than ever.

What do any of these over priced vehicles offer over a Ford Focus, they will not handle or ride as well, their interior design might be better but quality isnt really any better, they will be more expensive to insure and service for the average customer, and as lots of recent studies have shown, they really will not be any more reliable, and probably less so, but the dealers will have comfier seats and better coffee, as mention elsewhere I would take a Focus and change please..  Is the A3 really worth the extra over a similar spec Leon or Octavia with which its share 90% of its parts?

It would have been interesting to pit the Mazda 3 against this trio. That is done regularly in USA and Canada tests where Mazda is closer to being mainstream. It generally raises the question of why anyone pays substantially more for the German "prestige" brands. Except, of course, for their badges.