The Bowler Defender Challenge, a one-make rally series, will return next year using a newly developed car based on the latest Land Rover Defender 90.

It will be the second time that Bowler, the Derbyshire-based motorsport, tuning and limited-production specialist, has operated an exclusive Defender rally series.

The first ran from 2014-2016, using the classic Defender 90, and the new series, like the earlier one, is mostly aimed at drivers new to rallying.

If drivers get the bug from these national championship beginnings, Bowler can support their journey all the way through to competing in international cross-country events, like the Dakar Rally.

The latest Challenge car is based on a relatively basic three-door, short-wheelbase Defender with a 296bhp petrol engine and retains as many standard elements as possible. 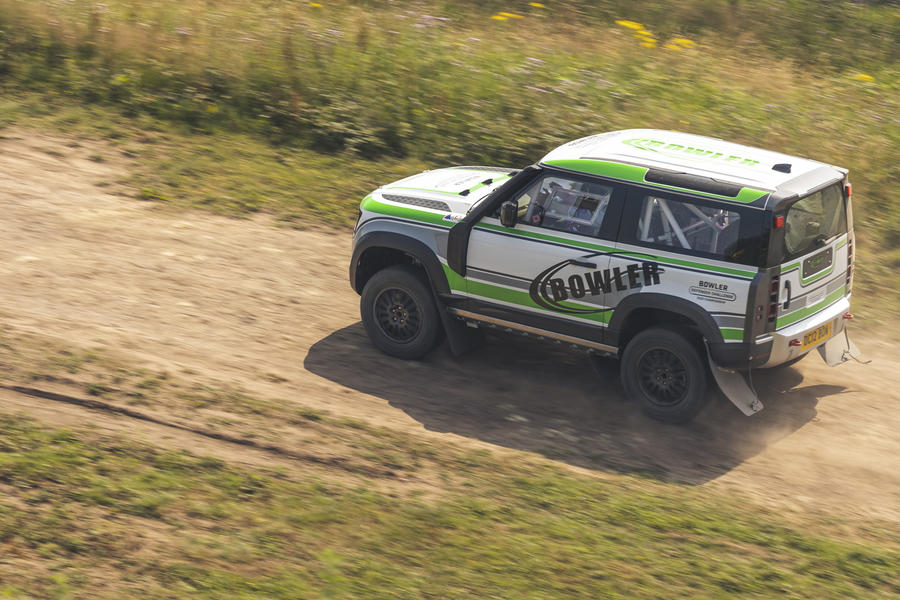 Compared with the original Defender, the new 4x4 is hugely complex, and you suspect that Bowler’s acquisition by Jaguar Land Rover in 2019 has helped the speed with which this car was developed.

JLR loaned Bowler a ‘proof of concept’ car more than a year ago – a development mule that was otherwise destined for the crusher, plus the firm has already produced two completed Challenge cars.

“We’ve got as much access to JLR facilities as we need,” says Calum McKechnie, Bowler’s general manager and formerly the head of Jaguar Classic. He sees the Bowler’s relationship with JLR as similar to that of the Mercedes-AMG Formula 1 team with its parent company, only on a much smaller scale.

Appropriately, he’s talking to me at Fen End, a JLR facility with an off-road test track that Bowler is using for the occasion. “We can access systems quickly,” he says, “but at the end of the day, we’re the decision-makers.”

In the Defender Challenge car’s case, a lot of the JLR systems that Bowler needs to access are the car’s complex electrical architecture. 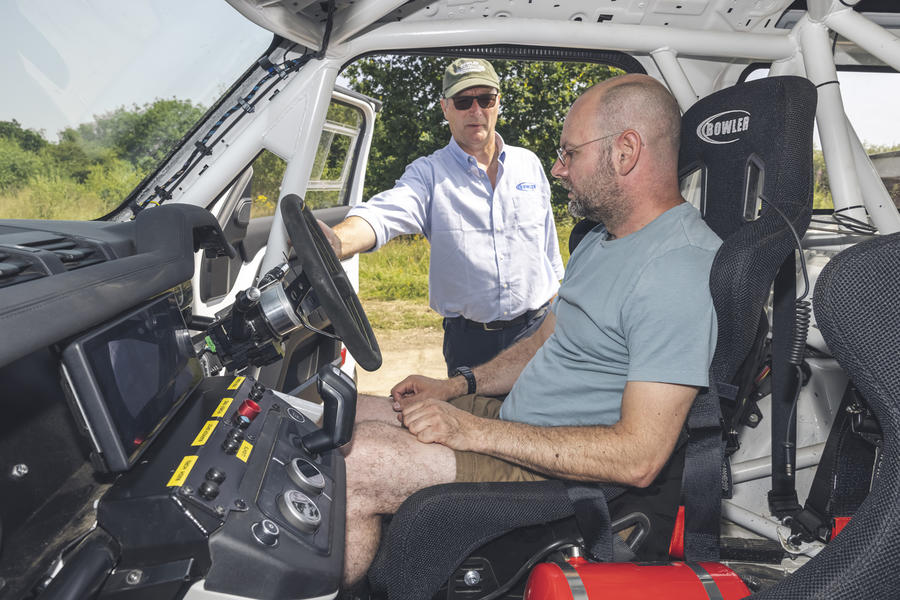 Bowler takes delivery of standard production Defender 90s and starts its work on them post-registration, performing a mix of mechanical changes but also electrical ones.

“We have the base vehicle’s electrical architecture and make changes as we need to,” says lead engineer Adrian Gregory. “For example, if you take the airbags out, the engine won’t start.” Unhelpful.

The Defender’s electronic stability control is the big thing to disable, understandably, given that a rally car has a rather different use case to a usual Defender, which will happily jump (I’ve tried it), but not like this one.

Disabling the yaw control on the steering switches that off. It currently limits the car’s top speed to 90mph, but that’s unlikely to be a problem on a Welsh hill rally.

“We worked with Special Vehicle Operations, who made the Bond cars [for the latest 007 film, in which Defenders jump big distances],” McKechnie says, “and asked them what they turned off.” But because a Challenge car starts road-legal and has to stay that way, a ‘race’ switch turns back on some of the systems that are necessary for compliance.

Mechanically, things are a little more straightforward but still different to the limited-production cars that Bowler is accustomed to making, such as the Bulldog.

“Normally we make our own chassis, build a safety cage on it and then clad it with bodywork,” explains Jez Siddall, Bowler’s head of design engineering. 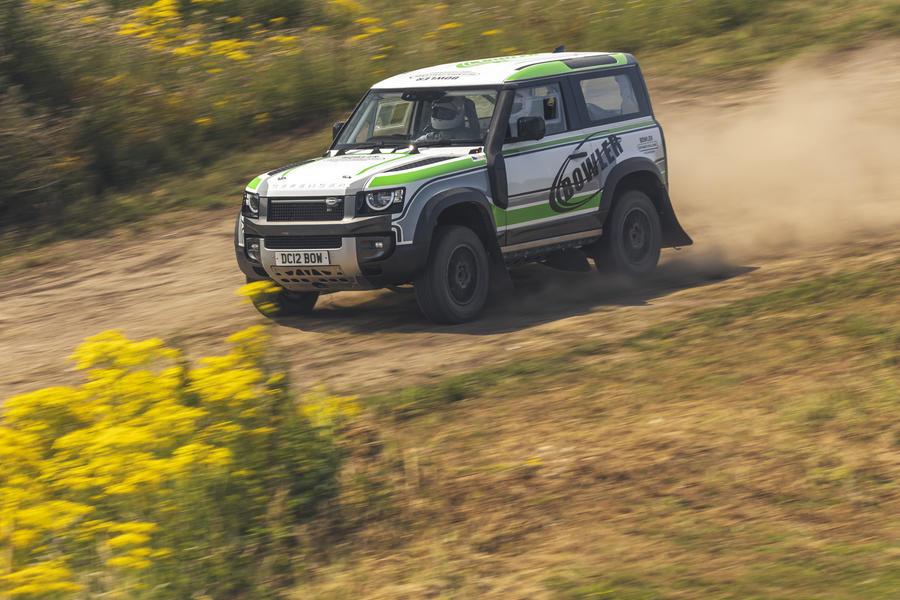 Not so here. The Defender is a monocoque, so Bowler has had to design an FIA-compliant cage that fits inside the existing bodyshell and make sure that it has space to welds that penetrate all the way around the tubing.

And although it’s a stiff body, it’s mostly aluminium, a softer metal than steel, which means the plates where cage meets body are huge – much bigger than usual. And Bowler has had to tie them to crucial mounting points, too. For example, the dampers – external reservoir units made by Fox Motorsport – mount directly to the cage at the rear.

The Challenge car sits on coil springs, with a ride height 25mm taller than the standard Defender, but also smaller wheels (18in). It will accept bigger tyres than are fitted here, which is all part of Bowler’s futureproofing plan.

This Challenge car gets the changes it needs to keep it as affordable and approachable as possible (although we will come to that in a minute), and Bowler is ready to make more changes later if drivers want to take their cars further afield.

The Challenge car’s four-wheel drive system runs a regular Defender set-up, there’s no electronically controlled differential and the gearbox is still an eight-speed torque-converter automatic, albeit fitted with Bowler’s own single flappy paddle on the steering column. 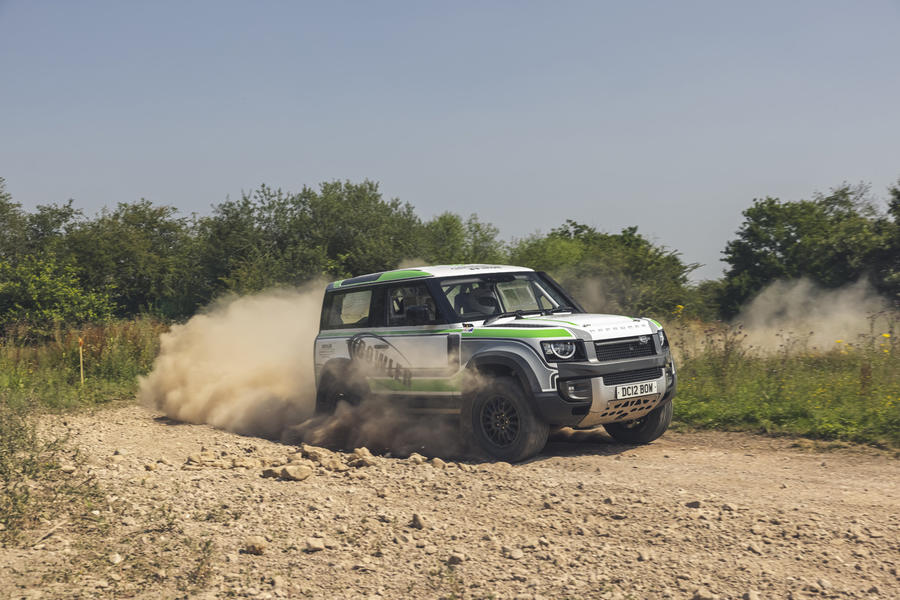 Most of the other modifications beef up the Defender for the demands of rallying. Two small side radiators, which would be exposed to danger, have been removed and the frontal section has been opened up instead to allow more air into the single central radiator.

There are new, more powerful supplementary driving lights in new housings (which are likely to become a Bowler accessory option later, because JLR fancies a slice of the aftermarket pie that independent tuners have been enjoying).

There’s a new rear roof lip spoiler, which keeps a bit of dust (but by no means all) off the rear screen and houses two powerful reversing lights so that you can more easily see your way out of trouble after you’ve had an off on a night rally.

Some 70mm is chopped from the bottom of the doors, which on the road car extend down to cover the sills so you don’t get muddy trousers when getting out of the car in winter, but which would be too exposed to damage while rallying. A 6mm-thick aluminium plate runs the length of the car’s underside instead, wrapping up and over the sills to act as a step for climbing over the cage.

Doing so is easier than in most competition cars, because the new Defender is so vast. There are two competition seats, the thick but incredibly neatly installed cage and just a few switchgear reminders that you’re in a Defender. It even retains air conditioning. 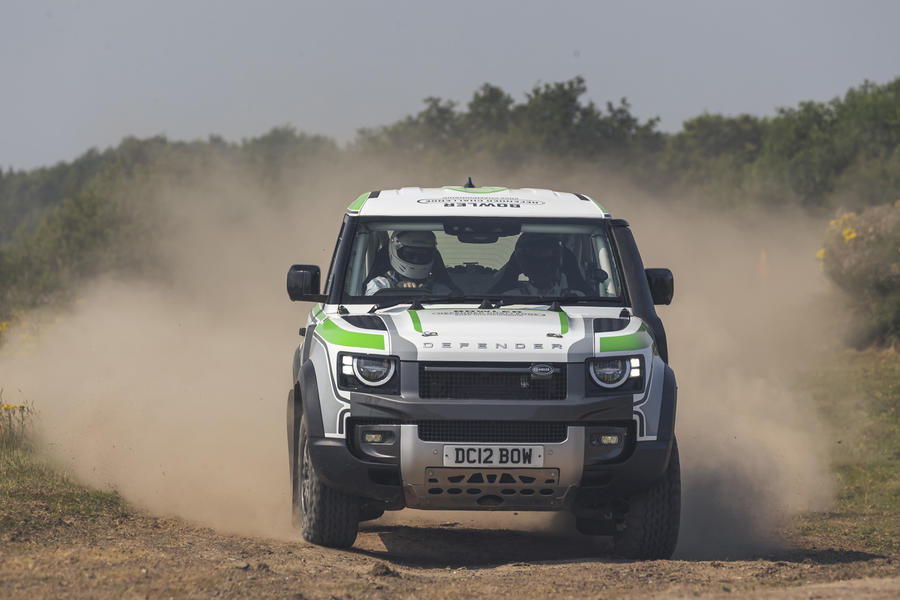 It’s easier to drive than a lot of competition cars, too. Certainly so than the earlier Defender Challenge car, which I tried in 2014. For a start, it feels less likely to fall over – a trait for which the original car had an unsettling tendency. There’s astonishing wheel control (Bowler is still fine-tuning spring stiffness), light and easy yet communicative steering, noticeable but limited body roll and great traction.

It turns more nimbly than I had expected, too, considering its weight is almost exactly the same as the road car’s 2260kg and there’s no active differential. As you lift or trail-brake into a corner, it rotates really nicely. And given that after being in it for two minutes I had willingly jumped it further than I’ve jumped any other car, I would say Bowler has pretty well nailed its approachability, too.

There are seven Challenge events lined up for 2022: a mix of gravel, hill and Safari-style rallies. It costs £99,500 to do it, including outright purchase of a car and event support. That seems a lot because it is, but so is everything in motorsport and, if the car is anything to go by, it will hold its value.

It’s clearly addictive, too: seven of the original Challenge drivers went on to buy Bowler rally-raid specials. And if that doesn’t appeal, you could just keep the car at home and use it to scare the bejesus out of visitors.

Old Bulldog, new tricks: How Bowler is thriving under JLR

This seems kinda brilliant to me... and not bad value, given you get a fully supported race series thrown in.