BACK TO ALL NEWS
Currently reading: A drive in the 666bhp Lister Thunder
UP NEXT
Fisker goes radical with Pear EV SUV

A drive in the 666bhp Lister Thunder

A riotous exhaust and a brutish bodykit mean the new, Jaguar F-Type R-based Lister Thunder is anything but subtle. We drive it
Open gallery
Close

We’ve not made it 50 yards when photographer Luc suggests that this is the most feral-sounding thing the sensible side of a Ferrari 812 Superfast.

He is probably correct too. Lacey isn’t a man prone to hyperbole, which is funny in itself because the car we’re driving trades committedly in the stuff: it’s an inky menace with acid-green highlights, enormous wheels satiating their arches with barely a toothpick’s width to spare and bodywork draped to the asphalt like a studded-leather ballgown. It sounds like a Nascar escapee, for pity’s sake.

Welcome, then, to the Lister Thunder. While this development car is recognisably F-Type, any vestigial elegance of Jaguar’s coupé is buried beneath a truly gothic disposition. At heart it’s an Jaguar F-Type R, only with new supercharger pulleys, an upgraded intercooler, improved induction and a tickled ECU that boosts the 542bhp 5.0-litre V8 to 666bhp. 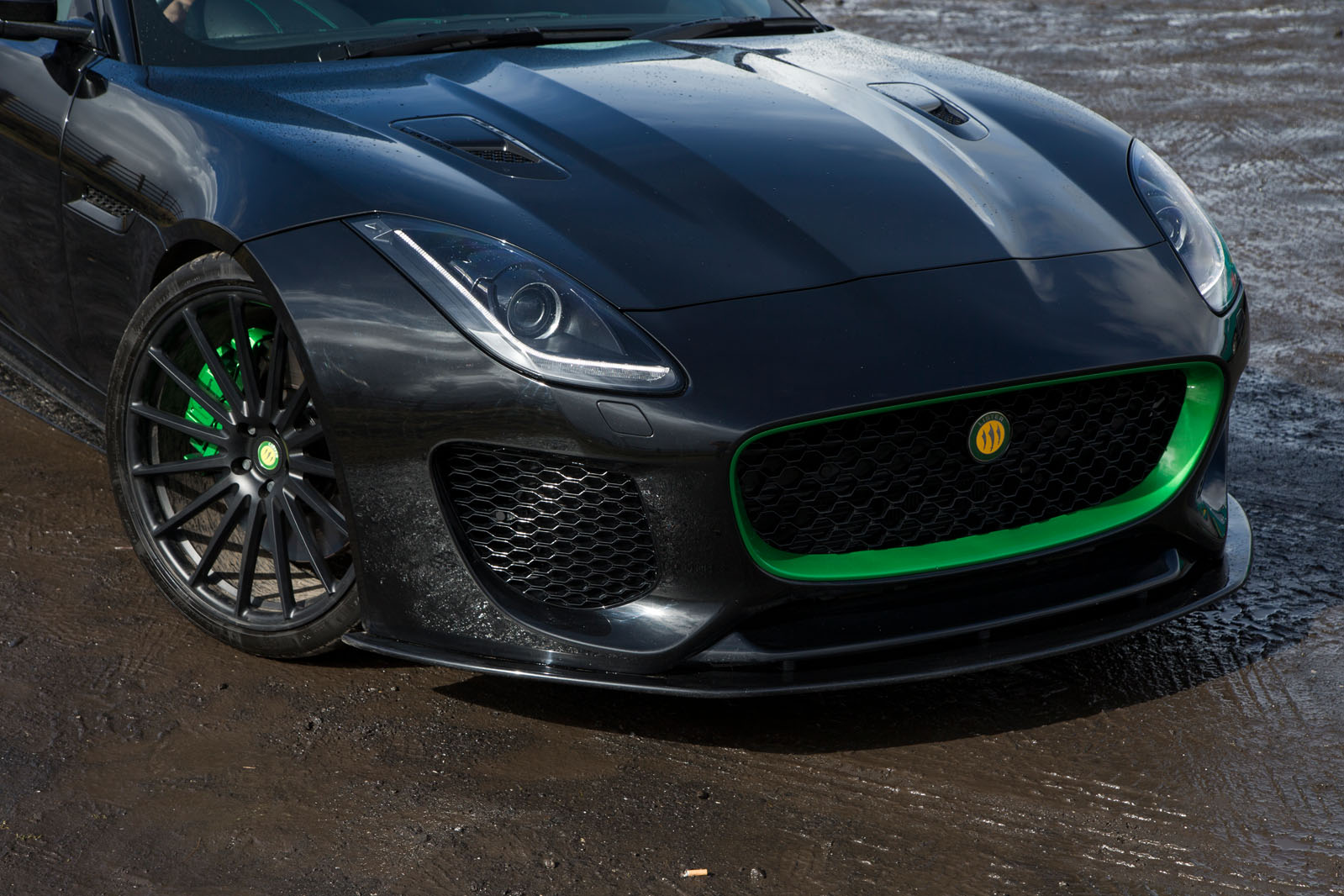 A 0-60mph time of 3.2sec and a top speed of 208mph put its performance in the realm of supercars. Four-wheel drive and an eight-speed torque-converter gearbox from ZF are carried over from the donor car, while a new exhaust supplied by Quicksilver not only saves 10kg but also delivers the chased-by-a-Spitfire soundtrack through carbonfibre-wrapped tips of a riotous bore. Even the crackles on the overrun don’t relent until you’ve picked up the throttle once again, meaning unrelenting noise of a murderous timbre is omnipresent.

What the name Lister means to you will almost certainly depend on your age. For a millennial such as your correspondent, it’s the Storm: a 7.0-litre wedge that raced in various GT series in the late 1990s and was homologated with four £450,000 road cars. For Lister CEO Lawrence Whittaker (slightly older), it’s most likely the Le Mans, which was a modified Jaguar XJS whose pulverising 600bhp was exceeded only by the blunt visual trauma of its bodykit.

For Whittaker’s father, Andrew, with whom Lawrence bought the rights to the Lister name for a six-figure sum in 2013, it’s the legendary Knobbly sports car. And, in fact, the Thunder we’re driving today might never have existed were it not for a Knobbly of questionable provenance and a stash of forgotten parts in Cambridge. 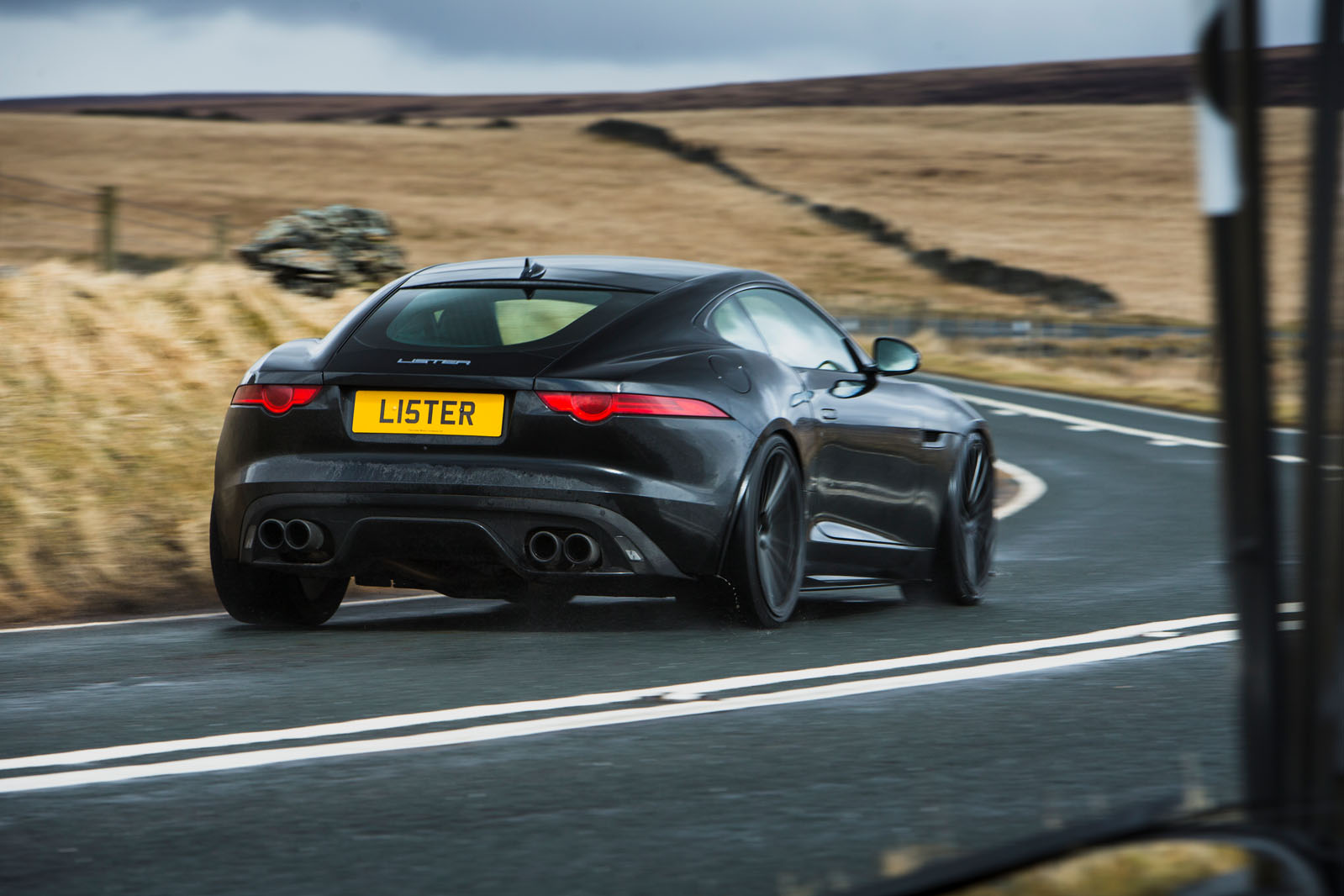 It was the disappointment of learning that their ‘1958’ Knobbly used a chassis dating from the 1980s and a body from the 2000s that led the Whittakers to George Lister Engineering in Cambridge. The place is genesis for Lister’s original racers and it was here the pair discovered forgotten blueprints and parts and even an original chassis jig.

Naturally, at this point the mission brief shifted from restoring a solitary Knobbly to purchasing Lister in its entirety and building a run of 10 recreation cars. Wealth acquired from another business – Warrantywise – proved handy in this regard, and with FIA certification for historic racing, even at £250,000 apiece the box-fresh Knobblys promptly sold out.

Fast-forward just five years and the company is preparing for June deliveries of the car before you here, which represents Lister’s return to the road. Some car it is too. And yet, if the prospect of driving a 666bhpF-Type on damp roads flanked by dry stone walls patiently waiting to tear into that bodywork sounds intimidating, the reality is different. 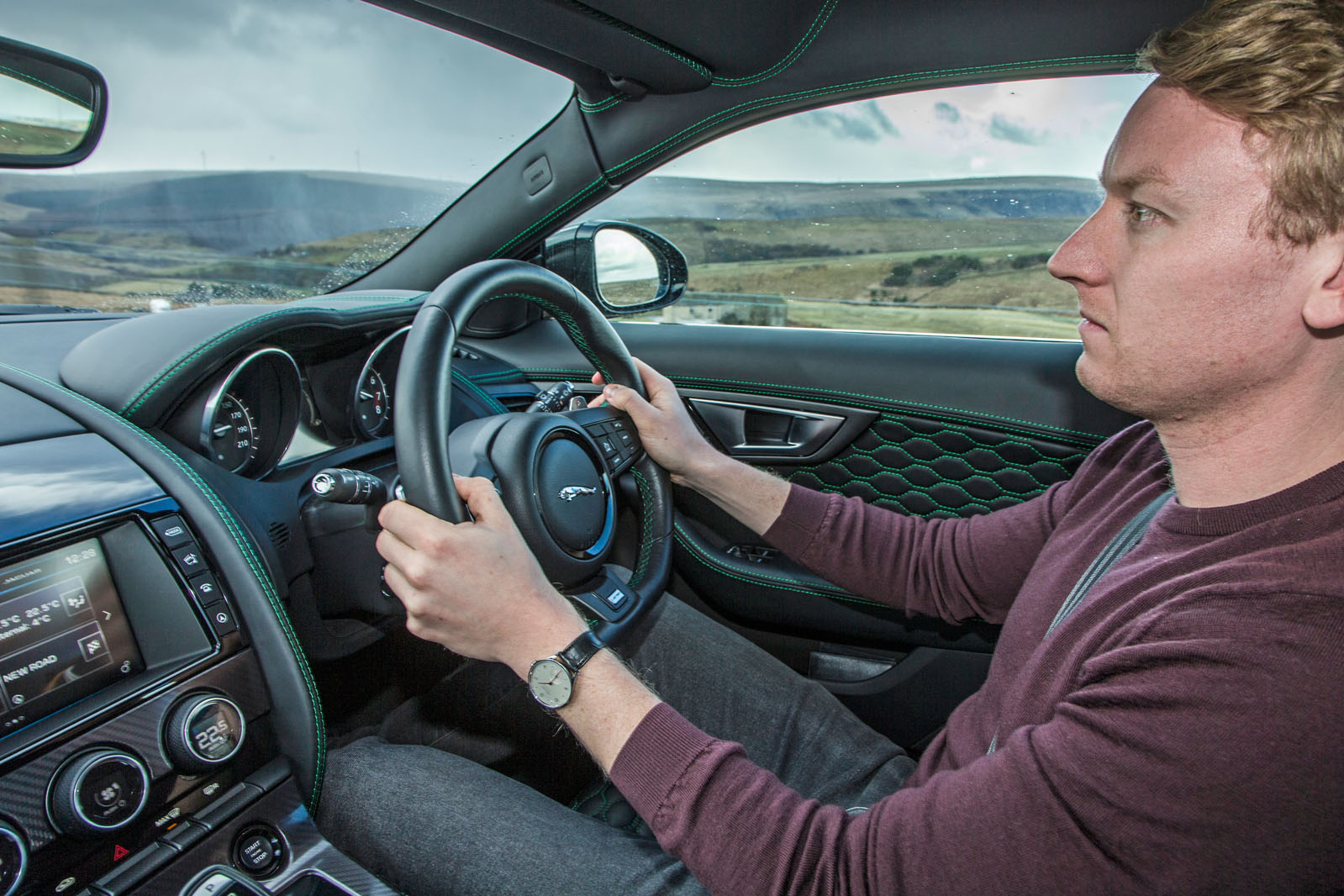 The Thunder is spectacularly quick in a straight line, but the supercharged delivery is so superbly linear that you’re never taken unawares by the distance-compressing hops in a way you might be in some similarlyformidable turbocharged rivals.

Moreover, and as you’d hope to find in an aspiring GT car, the Thunder allows to you establish a rhythm through and between corners. With seemingly bottomless reserves of torque, you’re also permitted to set the tempo as you please.

There’s traction too, and in circumstances like these we’re grateful for the driveshafts in the front axle. Without them you’d need to be exceedingly confident in your abilities to use even two-thirds of what this powertrain can deliver.  As it is – and absurdly so, given the numbers involved – you’re encouraged to chase the throttle right from the moment that green- lipsticked nose is turned in and the body settled on its outside springs. A hot-rod? Not exactly, which just goes to show how deceptive appearances can be. If a valve big enough to tame that exhaust note could be found, the Thunder is comfortable enough to make a formidable tourer.

Certainly the interior is pleasing enough in an old-school manner. The black leather is from Bridge of Weir and broken up by green stitching almost everywhere you look. Jaguar logos on the air vents and steering wheel give the game away, and the digital displays are yet to be reskinned on-brand, but taken as a whole it feels adequately bespoke. 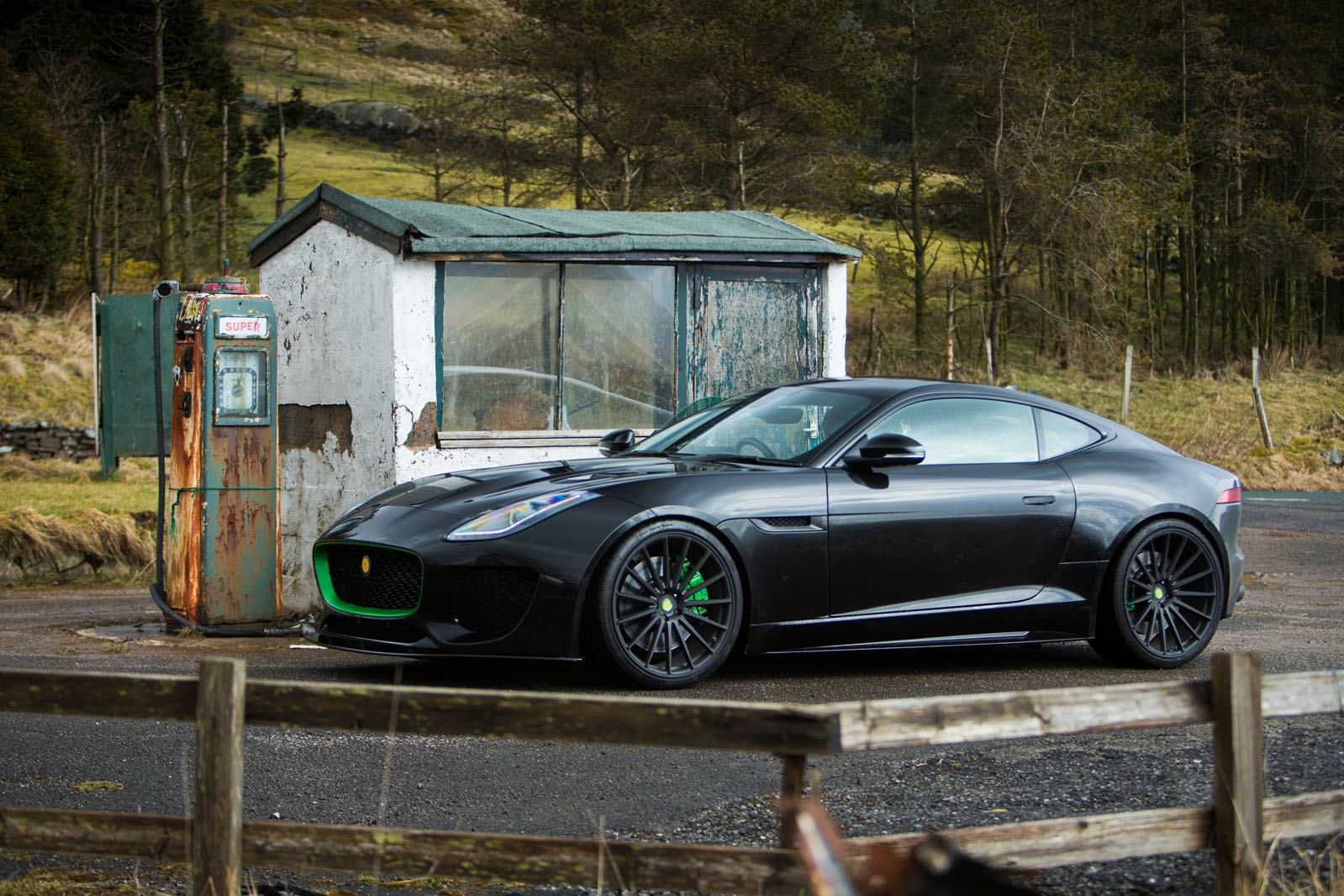 Acting as a metaphor for the entire car, the faintly aged feel of the architecture and switchgear is countered by a cosseting, focused ambience brought about by a low-slung driving position and a high scuttle. If nothing else, the place is rich in character.

Push on and it’s apparent this chassis still needs some fine-tuning before the keys are in customers’ hands.Those 21in wheels give the Thunder the stance of something that drove straight off the pages of Ian Callum’s sketchbook but they mean tyre occasionally meets arch-liner with a ‘pzizz’ that cuts through the exhaust blare.

Despite using KW springs stiffer than those found on an F-Type R (the adaptive dampers remain factory specification), the suspension is still a little slow to mop up road surface corrugations, particularly when loaded up. On these Lancashire roads, it can precipitate a faint skittishness that’s as welcome as cold hotpot, although it never threatens to incurably disrupt the balance of the underlying Jaguar chassis. 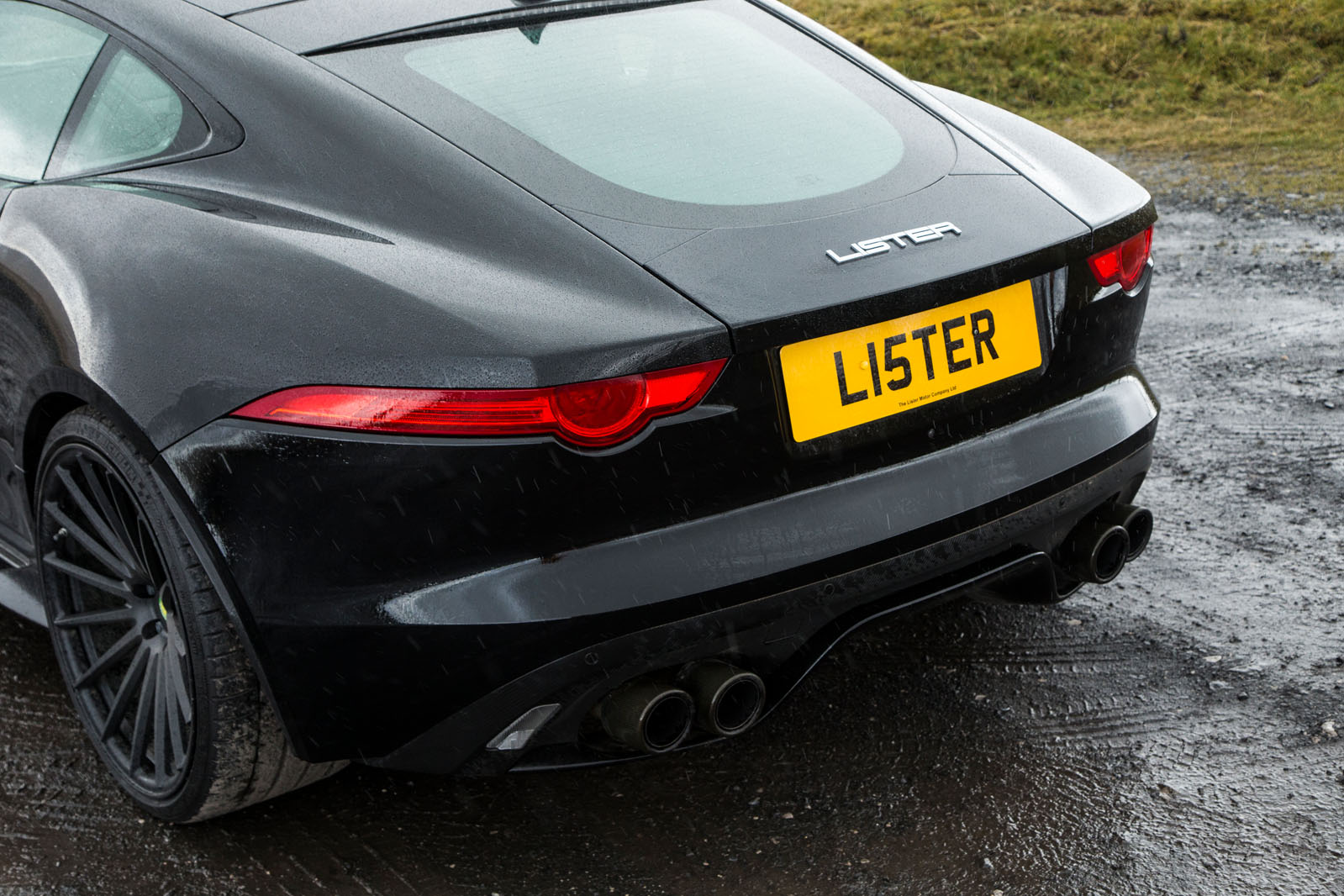 Indeed, one of the Lister’s strengths is that its sheer drivability belies the ludicrousness of the noise and firepower at hand. Snagging that carbonfibre splitter in town is going to be your greatest concern.

The price is £141,155, which puts the Thunder squarely in the crosshairs of Aston’s V8-engined DB11, while the additional £14,850 for which Lister asks to fit a carbonfibre bonnet brings the new Bentley Continental GT into play.

Anyone considering buying a Lister would be mad not to sample alternatives of this calibre before putting pen to paper, and yet we’d understand the person for whom the Thunder’s rarity and sheer eccentricity ultimately win out. There is work to be done here, not least with the finer chassis tuning, but encouraging first impressions suggest one of Britain’s best-loved marques is properly back, and with a deafening bang.

There are all sorts of risks involved in acquiring such a storied marque as Lister, and Lawrence Whittaker – as a young man in the context of his position – must have been relieved when orders totalling £3.1 million rolled in only 24 hours after announcing the Thunder. He and father Andrew had already orchestrated a successful run of continuation examples of the Knobbly, but this was proof there was also a hearty appetite for road cars. Those road-going Listers will be built at a new facility in Milton Keynes. Up to six cars can be worked on concurrently, with a three-month lead-time for the conversion. 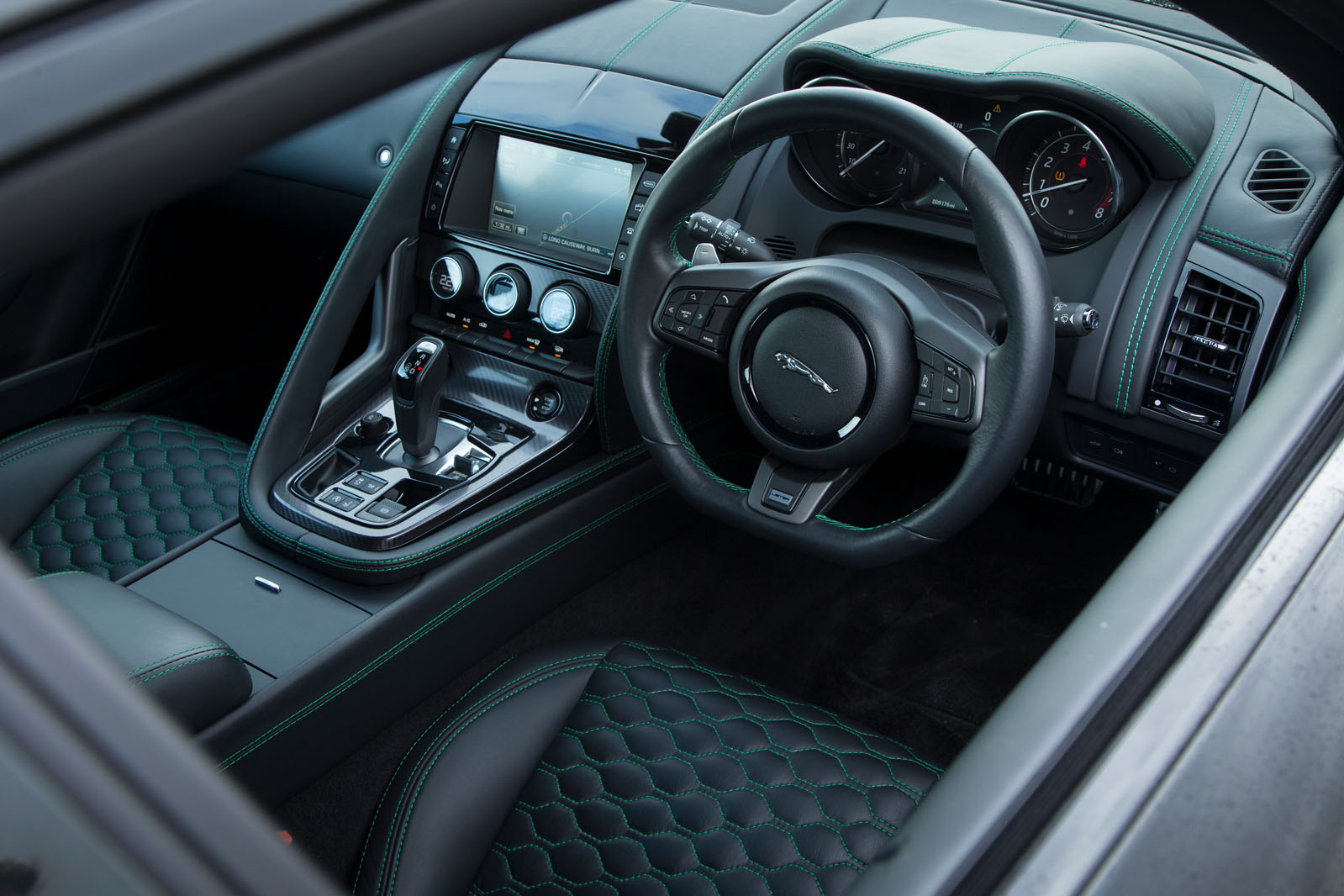 Whittaker’s medium-term ambition is to develop his company into a tuning outfit with intimate links to Jaguar. He cites Alpina’s relationship with BMW as an appealing model that would afford Lister early access to future cars and economise the modification process both in terms of expenditure and time.

As it stands, a Thunder begins life as a complete F-Type R, with Lister having no use for many of the parts it strips from the donor car. Jaguar – and particularly design director Ian Callum – has given short shrift to third-party tuners in the past, although the company has already been in touch to offer help with sourcing cars for modification. Where this will eventually lead is anybody’s guess, but it’s an encouraging start.

Once the run of 99 Thunder models is completed, attention will turn to the recently announced F-Pace SVR, for which Lister has already made plans. As much as 670bhp is on the cards, with a larger production run of 250 cars reflecting current market tastes. Don’t be surprised to see a Lister-ised take on the Range Rover Sport, either. 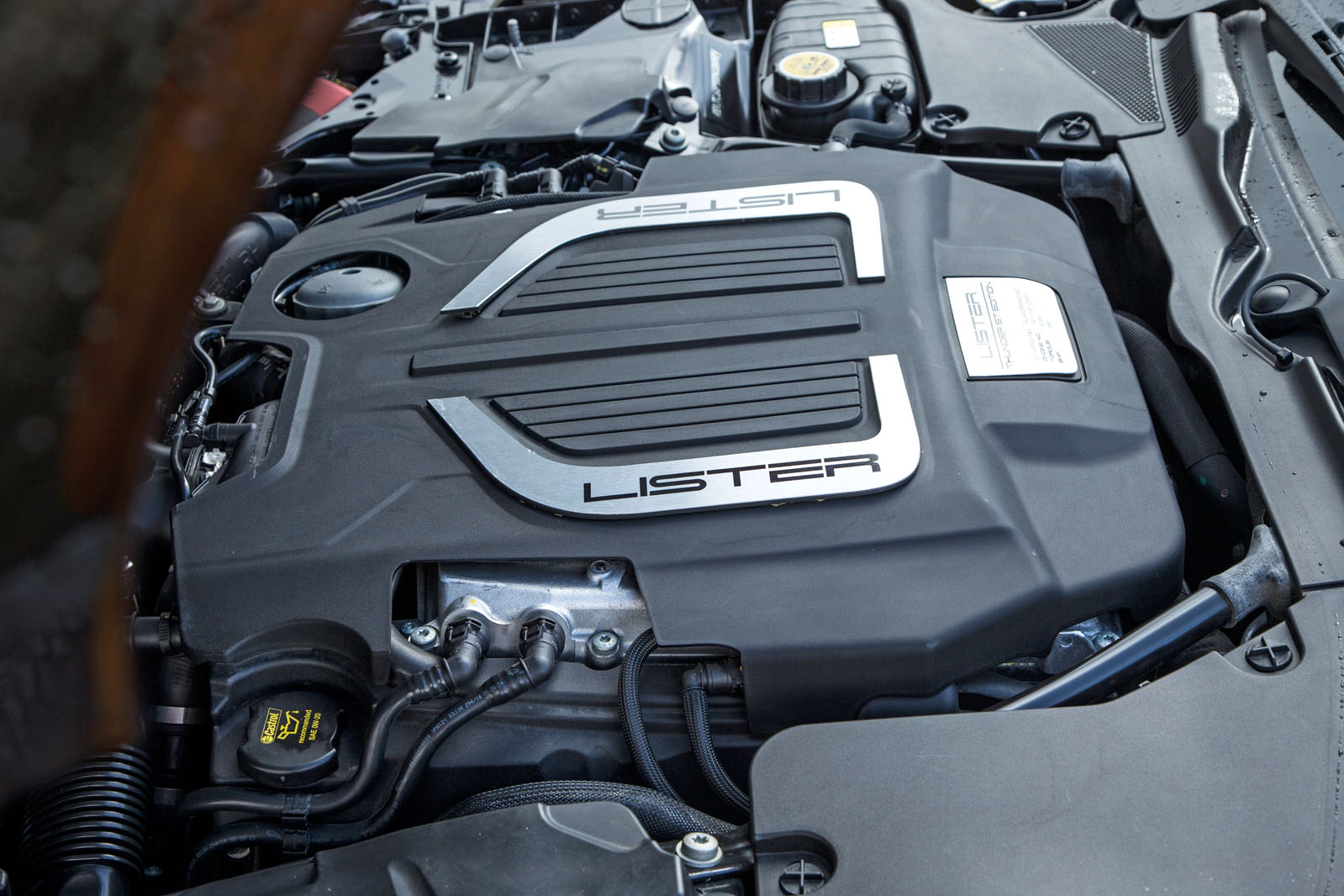 The grand plan is to sell enough modified Jaguar Land Rover cars to build a bespoke Lister and revive the ‘Storm’ moniker. It would be an expensive project – a figure of £50m passes Whittaker’s lips – taking the form of a hypercar to rival the likes of Pagani and Koenigsegg.

Annual production would be in single digits, with the asking price running to six. Before all that, however, there are the remaining Thunder build slots to fill.

I would have one of these

I would have one of these before a new Vantage or DB11. Easily. Every drive would be an occasion. It looks great too. I always had a soft spot for the Lister XJS.

That looks great, finally a

That looks great, finally a matured F Type! I think the visual tweaks work too, particularly the removal of the awful sideways leaper on the rear. Just need to replace the one in the steering wheel centre with the Lister badge.

Transplanting this engine into the XF would seem the obvious route to take, if they want to do an Alpina.