From £152,8659
Aston’s first AMG-engined car bodes well for the coming generation of V8 models. It's quick, soulful and with better handling and driver focus than the V12 DB11
Open gallery
Close

The Aston Martin DB11 V8 represents a landmark moment for the British car maker: it’s the first new Aston to be powered by an engine from Mercedes-AMG, made possible by a corporate tie-up inked four years ago between Aston Martin and Daimler AG.

The new-to-Aston 3982cc twin-turbocharged V8 is, of course, well known to us. Predictably, it comes into the DB11’s engine bay like an uncouth German death metal fan pogoing his way into a bourgeois English dinner party; Gaydon must have invited it along with clear expectation of trouble.

In a broader sense, I’ve no doubt that Aston knew exactly what it was doing when it took the decision, four years ago, that would lead to the DB11 getting a twin-turbocharged V8 engine from Mercedes-AMG as an alternative to the Cologne-built twin-turbocharged V12 with which the car launched last year. This engine’s an integral part of Aston’s future in all sorts of models.

But here’s the thing: Aston’s pair of DB11s now have torque-to-weight ratios of 373lb ft and 384lb ft per tonne; and, because Aston’s V12 is a heavy old lump and AMG’s V8 can get away with one less radiator, it’s actually the cheaper V8 model that’s sitting pretty on that score. So, in one respect – and, arguably, the most telling one where real-world performance is concerned – the little brother’s actually the bigger hitter.

It’s the V12 model for which the faster 0-62mph and top speed claims are made, though, because it’s almost 100bhp more powerful – and so Gaydon’s performance hierarchy isn’t exactly in tatters. But, with only 18lb ft of torque between the siblings and 115kg saved by the newbie, there was never likely to be much breathing space left for the pricier model.

So why take the risk? Aston only ever offered a 12-cylinder engine in the DB9, it’s on the cusp of introducing a new Vantage V8 model anyway and it never actually produced six- and 12-cylinder DB7s at the same time, so there’s scant precedent for this. Well, it’s globalism – again. While the £13,000 saving that UK DB11 buyers stand to make in return for giving up a third of their cylinder count could easily be splurged on optional wheels, paint, trim and stereo equipment, there’s greater pecuniary justification for the car’s existence elsewhere in the world. In China, for example, the local tax regime will make Aston’s sub-4.0-litre eight-cylinder car £70,000 more appealing than a V12. It’d take more than a celestial roofliner to wipe that out. 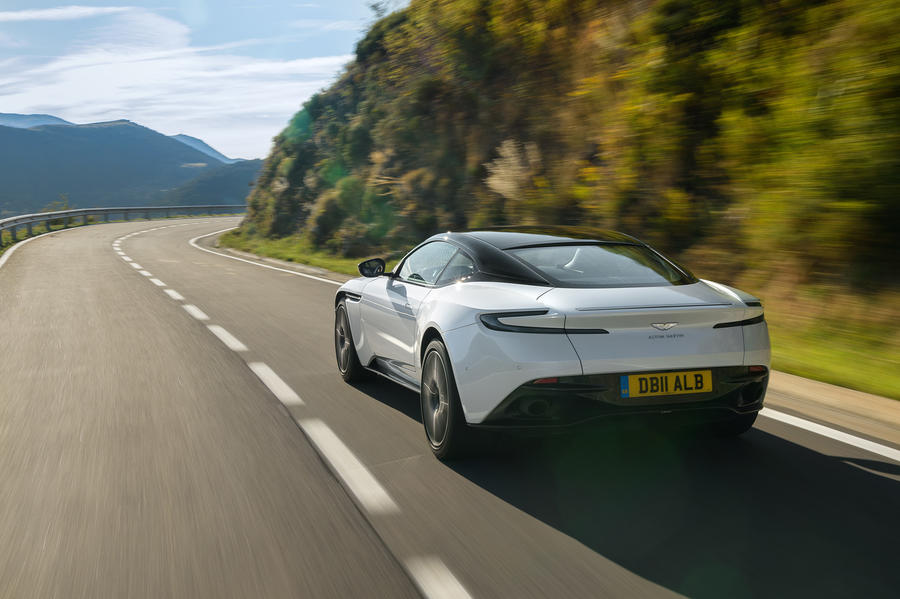 Conveniently for those of us living elsewhere, though, there are reasons other than financial ones to consider whether your new Aston really needs the full-dozen cylinders – and, depending on your outlook, they may ultimately be convincing arguments.

On the back of that 115kg weight saving (not to mention a favourable redistribution of mass rearwards and inside the car’s wheelbase), Gaydon has taken the opportunity to refocus the DB11’s suspension and steering to make it handle better and involve its driver more. This, you may remember, was one of only a few criticisms we had of the DB11 in last year’s road test. The V12 car plays the long-striding, rich and enigmatic grand touring coupé very well – but it was unusually softly sprung and light in its controls by Aston’s standards. And now that I’ve driven the DB11 V8, I understand why it was made that way.

The specific changes made to the V8’s suspension include stiffer bushings and anti-roll bars front and rear, some altered wheel geometry, as well as new adaptive dampers programmed for a greater spread of ride comfort and body control between the Aston Martin DB11’s GT, S and S+ drive modes. There’s a new lateral link in the multi-link rear suspension and, according to Aston dynamics don Matt Becker, a much greater sense of support from the rear axle. The car’s effective spring rates haven’t changed, but its power steering calibration has, with an emphasis put on greater weight, more feedback and improved on-centre stability.

This, therefore, is quite a dramatically altered animal – particularly when you consider how significantly its weight saving must also contribute to that dynamic overhaul. But a better Aston Martin GT car? I guess that’d depend how badly you want your £150,000 Aston to have a V12 engine that’ll only ever appear under the bonnet of an Aston.

V12 engines are, after all, increasingly rare and enduringly special things. But, as it happens, Aston’s done a remarkably good job of making Affalterbach’s 4.0-litre V8 its own. It sounds subtly different than you’ll find it in a Mercedes-AMG GT or an Mercedes-AMG E 63, thanks to new induction and exhaust systems. It’s more than potent enough to make the Aston a first-class performer; in some ways, it even shows the V12 up a bit.

Granted, it’s a shame that this car Aston Martin doesn’t sound as majestic as last year’s delectable Vantage GT8 – but I reckon the voice of God, in four-part harmony with backing vocals from the Bee Gees, would probably pale by that comparison. There’s certainly a muffled tonelessness to the DB11’s V8 compared with the old atmospheric 4.7, but there’s still culture and soul here aplenty – not to mention greater subtlety and reserve than most AMGs normally bother with.

Aston’s version of Mercedes-AMG’s 503bhp, 3982cc twin-turbocharged V8 gets its own induction and exhaust systems, its own Bosch ECU programming and a wet sump (instead of the dry one that the Mercedes-AMG GT uses). The lubrication system was needed in order to package the engine between the front cross-members of the Aston Martin DB11’s superstructure and Gaydon reckons it ends up adding little if anything to the engine’s overall weight compared with a dry one.

The development of the engine's ‘sonic signature’, says the company, was all about tuning out a lot of the bass frequencies that AMG prefers and replacing them with greater mid-range tonality in a bid for a less transatlantic, more sophisticated European sound. The engine’s surprisingly reserved with the powertrain in GT mode and much more full-blooded in S and S+ modes – although you hear more induction and combustion noise here, and less woofling exhaust, than you do in AMG’s applications: a welcome change.

Having widened the gap between suspension modes, Aston has also created bigger and more clearly defined steps between the matching GT, S and S+ powertrain modes for the DB11 V8 – and to worthwhile effect. The car prefers to hold on to a high gear and allows that V8 to knuckle down through the lower mid-range if you use GT mode. S suits the car best on the road, in which the transaxle 'box is quick to drop one ratio in response to a dipped accelerator but not given to hunting or overreaction. S+ is one to enjoy for short bursts, but can make the car seem unhelpfully highly strung. Or there’s always manual paddleshift mode, which is improved in the V8’s case by a shorter, snappier paddle action than the V12's.

Whichever mode you’re using, the V8 feels nicely lively and more responsive than the V12 – and really torquey. The vigour with which the car hustles from 3000rpm to 5000rpm is seriously impressive, and it makes for more effective overtaking potential and probably greater real-world ground-covering pace than even the V12 car has.

The DB11 V8’s handling, however, is an even better advert for it than its engine. Aston’s proud of the improvements made to the car’s feedback levels, body control and both its directional precision and handling response - and rightly so. The V8 remains supple and compliant but also keeps check on its body movements quite a lot more closely and deftly than the V12 does.

The difference that weighty, newly communicative electric power steering system makes on your ability to gauge the grip level under the front tyres is a big one, too. Being able to take that much more confidence in the adhesiveness of the car’s front end makes the pace of its steering rack easier to assimilate and also means you can begin to explore the balance and adjustability of the DB11’s chassis in a way you simply wouldn’t risk in the 12-cylinder car. 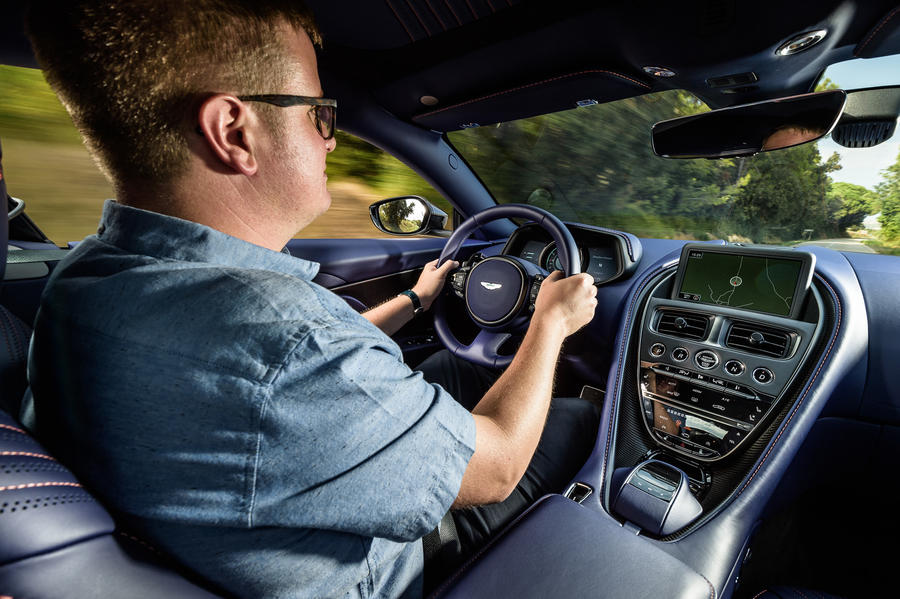 At the end of a long drive, you’re left in no doubt that this car feels much truer to Aston’s long-standing tradition of building sporting grand touring coupés and proper driver’s cars than its more expensive and powerful cousin. The Aston Martin DB11 V12 retains its place, of course – and as a more isolating, gentle-riding, luxurious distance machine, it’s great at what it does.

But for proof of the V8’s stature, look no further than Aston’s plan to transfer most of the V8’s suspension and steering changes onto the V12 as part of next year’s model-year revision. 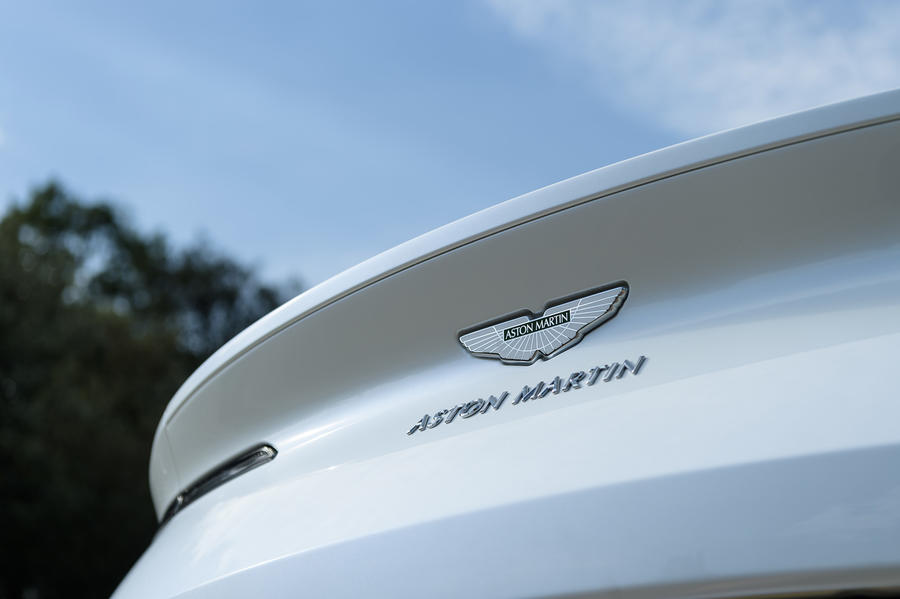 Personally, to me a top

Personally, to me a top flight Aston should always be a V12. This just cheapens the brand. The V8 should be left to the Vantage.

I bet when they apply the same chassis mods to the V12 next year, it will be the one to have again.

I have a very great love of

I have a very great love of V12 engines, but AM has only a recent history of them.
bowsersheepdog 29 September 2017

Better in than out

Unlike some previous commenters I like it in white, however, it is just another lookalike Aston Martin, they've all been too similar for far too long.  The purple interior is utterly marvellous, though, and is the sort of thing more manufacturers should be doing (colour-wise, obviously, one cannot expect the same quality of materials in a typical family car).  That's the kind of fresh thinking they need to bring to their exterior styling.