BACK TO ALL NEWS
Currently reading: Bentley Bentayga Pikes Peak car to make record attempt this weekend
UP NEXT
Rodin FZero: V10 weapon aims to be world's fastest car

The Bentley Boys of the 1920s were known for pushing cars to the limit. Rhys Millen plans to do just that by breaking a hill climb record in a Bentayga
Open gallery
Close

Bentley has confirmed that testing for its Pikes Peak International Hill Climb Bentley Bentayga W12 is now complete, meaning the challenger, which will be driven by Rhys Millen, is now ready for its record attempt over the weekend.

Millen, the California-based Kiwi who is twice outright winner of the hill climb and a multiple class winner, was confirmed as the driver earlier in the spring, when Autocar visited Bentley's Crewe headquarters to inspect the Bentayga he will pilot (and which is pictured during testing in the newest images). We look back at our visit to Crewe in the run-up to the 2018 Pikes Peak event… Woolf Barnato would approve. Tackling the Pikes Peak hill climb, one of the original motorsport tests dating back to 1916, is firmly in the spirit of the challenges undertaken by Barnato and the other original Bentley Boys of the 1920s.

Back then, the Bentley Boys proved the prowess of the manufacturer’s models by racing against trains, dominating Le Mans and setting records at Brooklands.

Now, to prove its Bentayga W12 can out muscle and out-handle its high-riding performance car rivals, Bentley is heading to the Colorado mountain in mid-June to attack the class record for production SUVs. That benchmark currently resides at Gaydon: in 2014, a Range Rover Sport driven by Paul Dallenbach achieved a time of 12min 35.610sec for the 12.42-mile course.

Bentley is confident it can set a new class standard, especially with Millen at the wheel. He's lived and breathed the event for almost his entire adult life and his father Rod was a five-time winner in the 1990s. 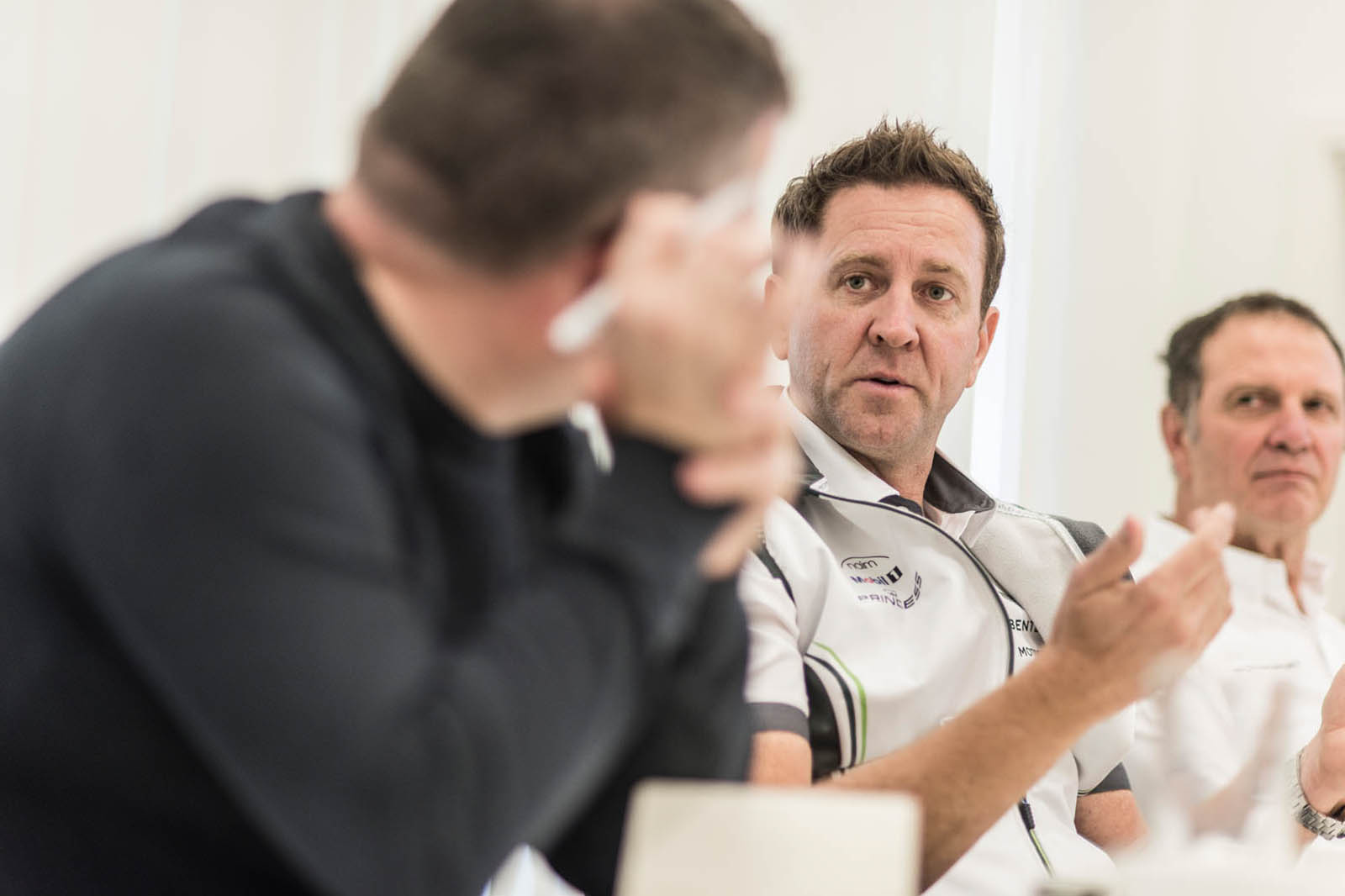 Finished in a striking green wrap, the Bentayga is being prepared by Bentley’s motorsport department, headed by Brian Gush.

Millen will bring more than intimate knowledge of the mountain course’s 156 corners – his race team will look after event logistics and hone the preparation of the car together with an in-house Bentley motorsport engineer, David Argent. The team has been hard at work since the first announcement of the project in January and Millen has been driving a road-going Bentayga in California.

“You don’t need to spend much time in this car to evaluate its potential,” he says. “Pikes Peak is a ‘burst speed’ course, not a ‘sustained speed’ course, and the production values of the Bentayga are going to shine in that environment.” 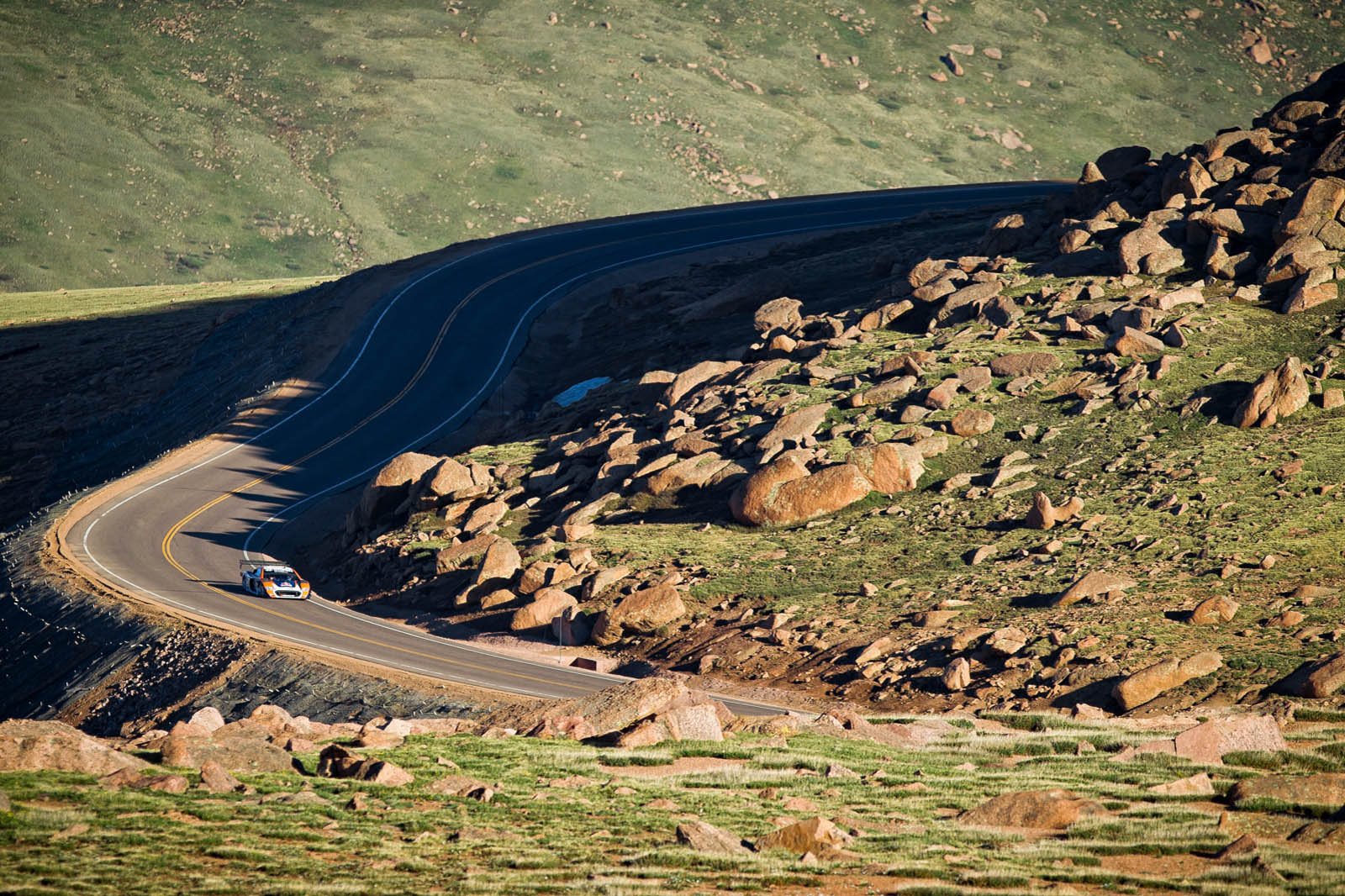 The Bentayga is running a standard 5950cc W12 engine, which means it produces 600bhp and 664lb ft. As a twin-turbocharged unit, it will suffer less from the performance losses that aff lict naturally aspirated internal combustion engines at higher altitudes, although Gush says “even a turbocharged car will lose about 5-10% of its power” during the 1440m climb from start to summit.

Millen adds: “That’s when displacement is the biggest factor. All credit to the Bentayga, because six litres are what you want. The engine is basically like a big air pump.

“One of the most impressive things I’ve found with car is the gearshift. The first four gears are stacked very closely. The average speed for the run will be mid-70mph and the maximum speed will be in the region of 125mph, but for most of the run I’ll be between second and fourth.” 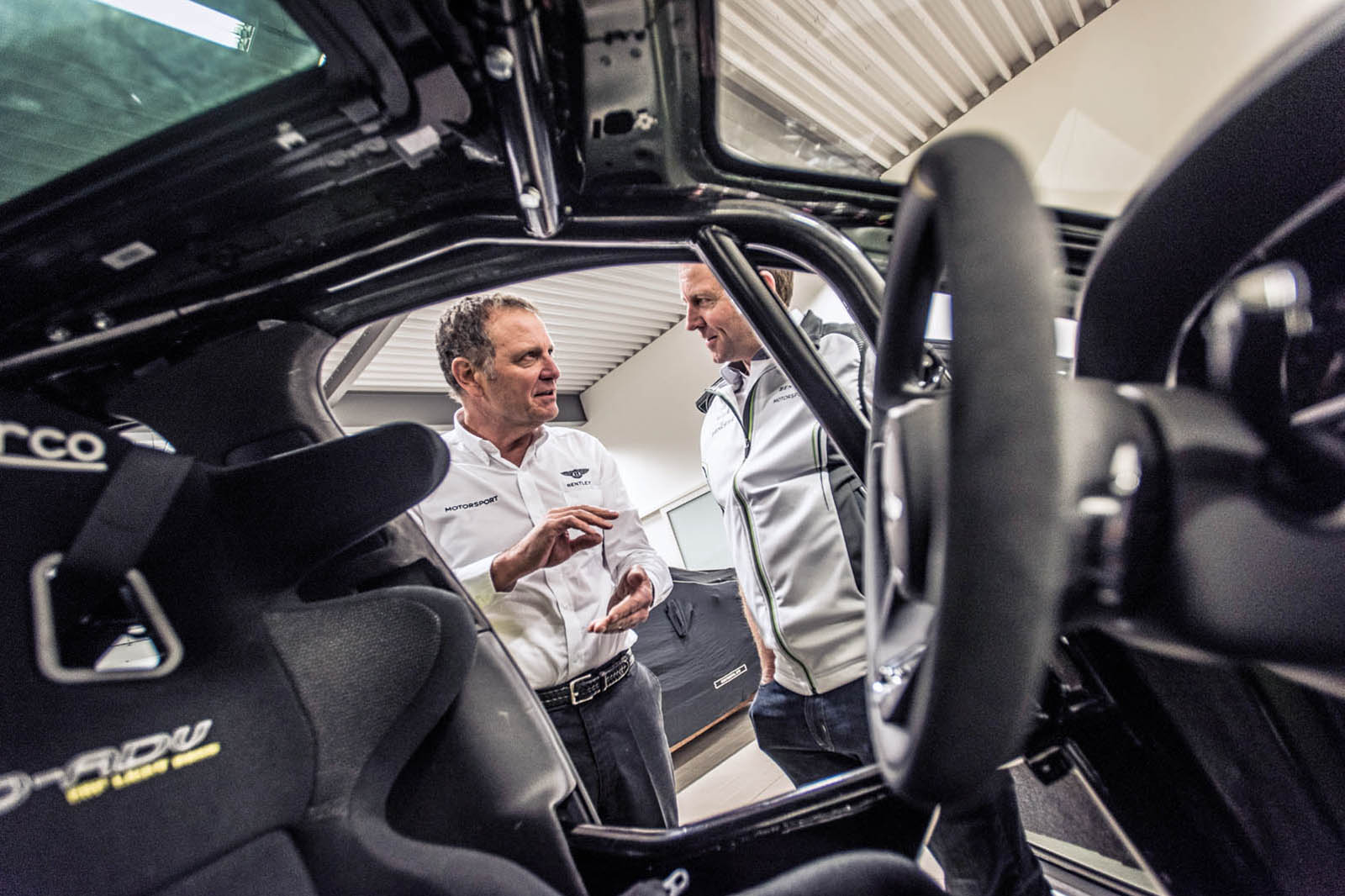 The team will fine-tune the Bentayga during pre-event tests at Willow Springs Raceway in California and Pikes Peak itself. There’s work to be done on determining which of the Bentayga’s driving modes works best, although Millen already has a good idea: “Sport mode is the right place to be: the gearshifts are crisper, you can use the paddle shifts to change gear manually and you can turn the traction and stability controls off. You’re essentially putting the car into a pure race mode.”

The Bentayga will run in an ‘exhibition’ class, with as few tweaks as possible to stay close to production specification. Changes are largely safety-related: the driver’s chair is replaced with a carbonfibre safety seat and all other seats removed. The panoramic glass roof, standard on the road car, is replaced with an infill panel. Trim and extraneous equipment will be removed, and a roll-cage and fire extinguisher installed.

Beyond that, the rulebook permits anything that exists on the road car’s spec sheet as either standard kit or an option, so any components that offer a weight or performance advantage are fitted. In all, the Bentayga is some 300kg lighter than its road-going equivalent. It is nevertheless about two tonnes. With 156 corners to negotiate and precipitous drops off the mountain, slowing down is an important consideration, not least because the thinner air at altitude affects brake cooling. Carbon-ceramic brakes – offered as an option on the road car – are fitted. 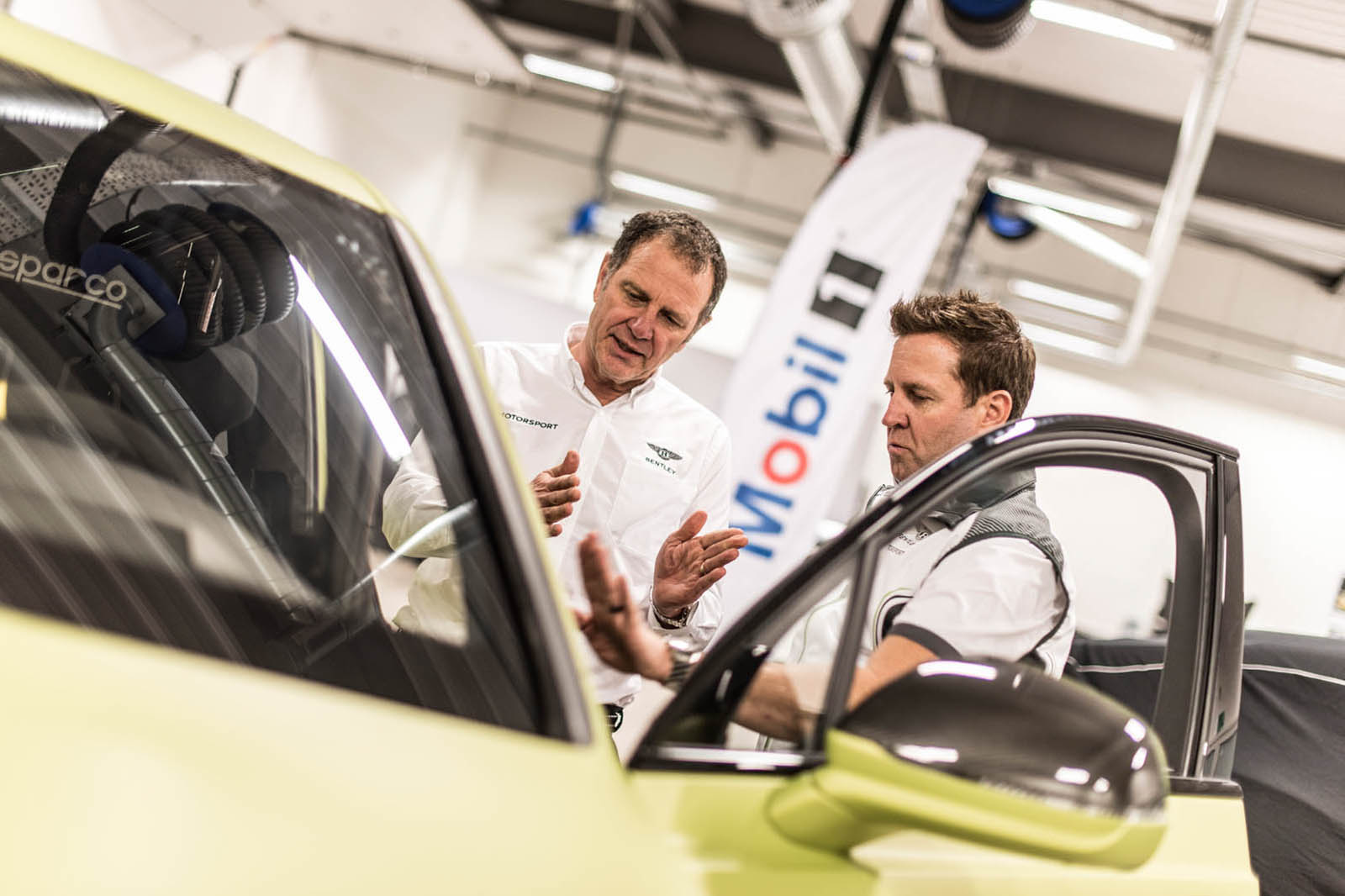 The experience of Millen and his team will be vital during the intensity of race week at Pikes Peak. Practice and qualifying runs take place on shorter sections of the course. The only time competitors tackle the full 12.42 miles is on race day.

The course, a public toll road to the top of the peak in the southern Rockies, was for many years a dirt track, but sections of it were paved until, in 2012, it was all-asphalt. Just because the course is paved now doesn’t dampen down the challenge. In fact, says Millen, “it’s scarier, because it is faster. It is pretty intense. When having a good run, you can gauge from the handling of the car literally four corners into a run whether you have the confidence to continue pushing.”

Millen is fired up by the prospect of proving a performance SUV in such a tough environment: “Maybe four years ago, an SUV was a compromise. Now, when you drive this vehicle, with its handling, braking and performance attributes, there is no compromise. It’s a four-seat sports car and this category is growing.” 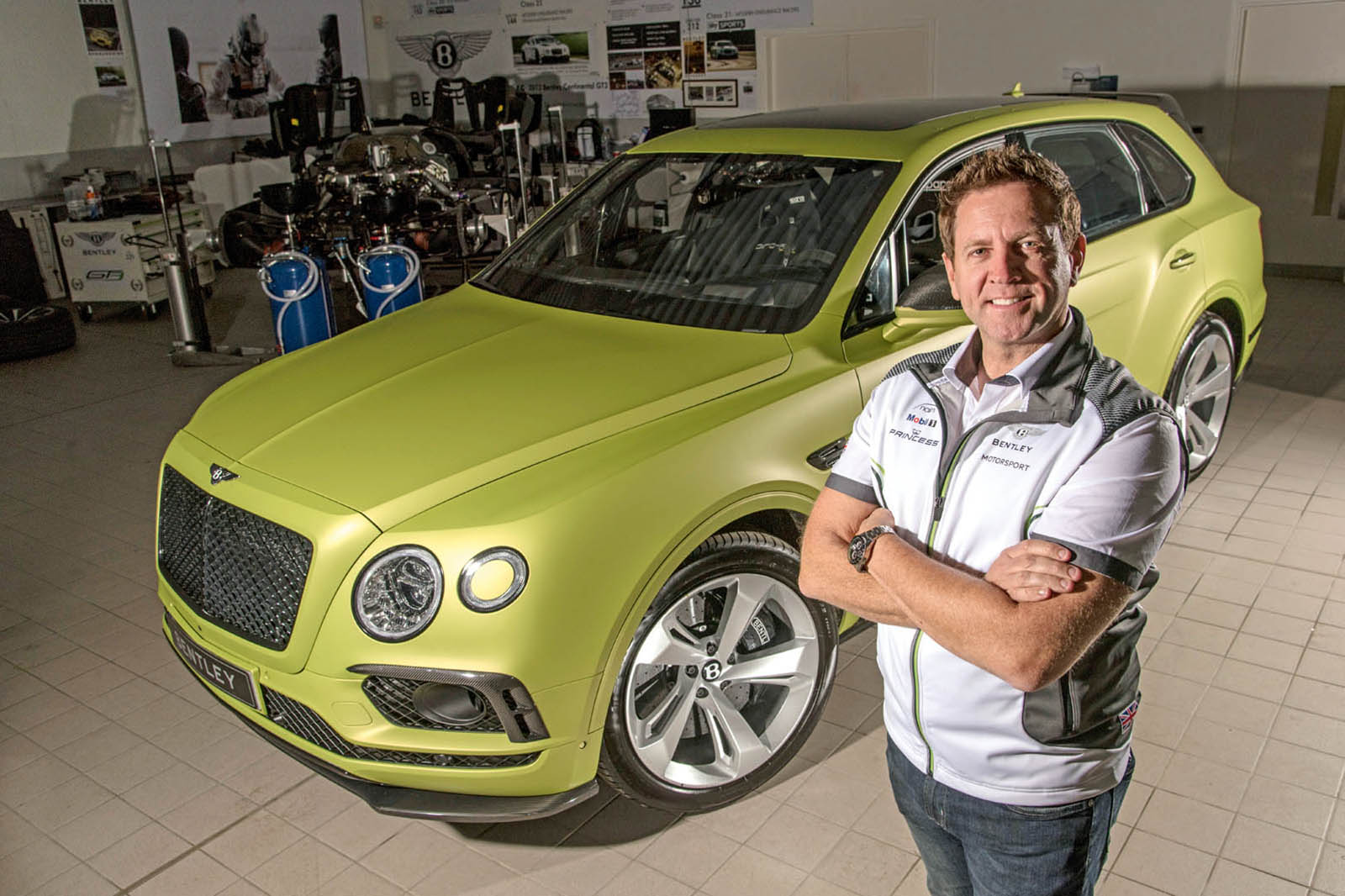 Bentley won’t be drawn as to whether this year’s effort is a one-off, but with the company’s centenary looming next year, another tilt at the record in 2019 would be a fitting way to celebrate the heroic feats of Bentley Boys both past and present.

AUDI - Five victories in the 1980s, including the first sub-11min run for Walter Röhrl in an Audi Sport Quattro E2 Pikes Peak in 1987.

VOLKSWAGEN - Back at the mountain this year after a 31-year absence to prove the potential of its ID R electric prototype, which Dumas will drive.

I'll be attempting to set the Pikes Peak record for an eight seat diesel MPV with three mismatched tyres and Yosemite Sam mudflaps in 2019.  Computer simulations (performed in Excel 97) indicate the existing record of 25:47 is within reach.  At this stage I'm in the early stages of negotiating with Fernando Alonso to drive.  If that falls through, some chick I met who works at a McDonalds drive through can do it.

Must you post your inane drivel in every article?

I can't help thinking that if similar was done to the RRS SVR to lighten it by removing the seats then the 575bhp and smaller size would probably beat the Bentley.

Not that this isn't impressive, it is, but if I were to pick an SUV for this the Range Rover Sport would be my first choice.