BACK TO ALL NEWS
Currently reading: Behind the wheel of the ultimate Caterham track car
UP NEXT
New 2022 BMW 3 Series brings redesign and tech upgrades

Jonathan Palmer loves the Caterham Seven so much, he’s developed his own (again). We join his quest for handling perfection
Open gallery
Close

A car maker would call it an abuse test. Every March, PalmerSport’s doors open for drive events at Bedford Autodrome. People come, they thrash cars around for the day, encouraged to drive as fast as they can by Jonathan Palmer’s race instructors, and go home, happy and knackered.

By the end of each year, 12,000 people have taken part, with each of Palmer’s track cars covering 25,000- 30,000 miles – the equivalent of seven racing seasons. They might spend 60% of their time at full throttle and, when they’re not, it’s full braking or full cornering with varying levels of driving finesse. 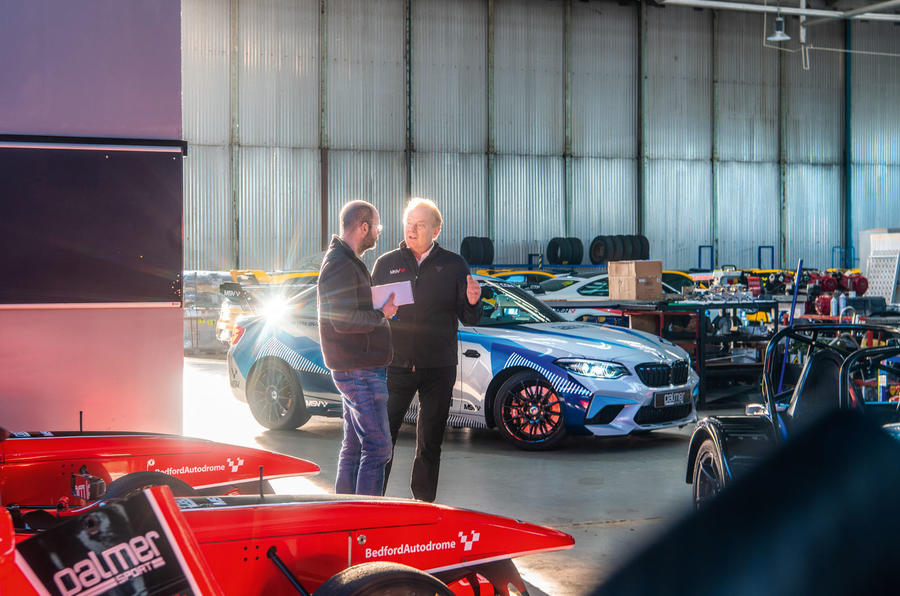 At the heart of it all – in a fleet made up from BMW M2 Competitions, Renault Clio Cup cars, Formula 3000 single-seaters, JP-LM open-topped sports-prototype-alikes and evergreen Land Rover Defenders – are Caterham Sevens.

Palmer has used Sevens for virtually all of PalmerSport’s 27 years. “We used to run them at Bruntingthorpe [the proving ground/airfield where PalmerSport began],” says the boss, Jonathan Palmer. “Then when we came to Bedford, we designed each circuit around a particular type of car. The East Circuit is the tricky, sinuous one, which was designed for a Caterham.” 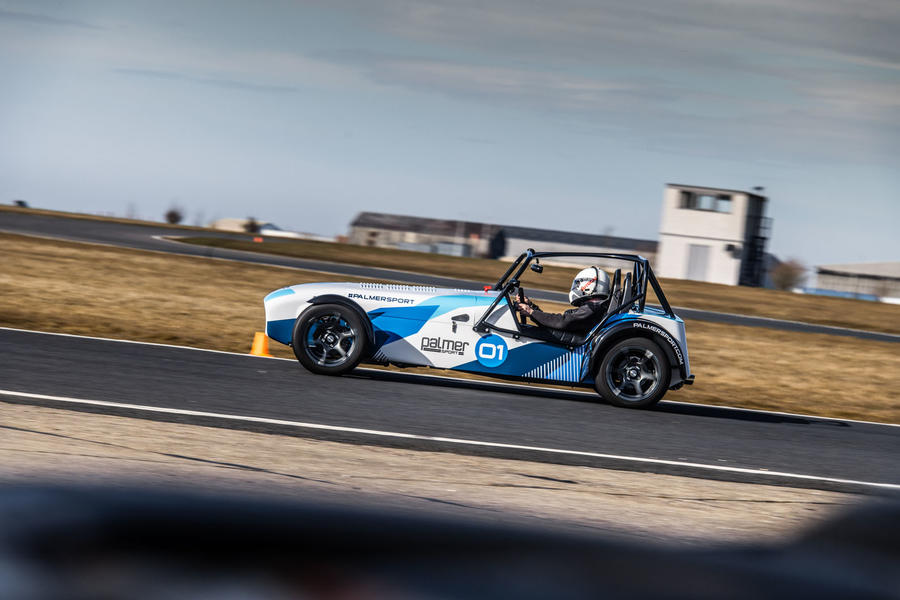 Partly as a result, Caterhams consistently top the customer satisfaction survey every PalmerSport customer is asked to complete. “The Caterham is fun. You can push it, you can slide it. That concept – front engine, rear-wheel drive – it’s unbeatable really,” says Palmer.

Having tried a few different variants over the decades, this year Palmer wanted a Seven specifically designed to let people jump in and get the best out of it and Bedford’s East Circuit.

To spec it, Palmer largely “told Caterham what we want”, and PalmerSport built the cars, including installing an instructor’s second brake pedal (with the ability to kick the brakes off as well as on) and a comprehensive roll cage that allows easier access than a full race cage. 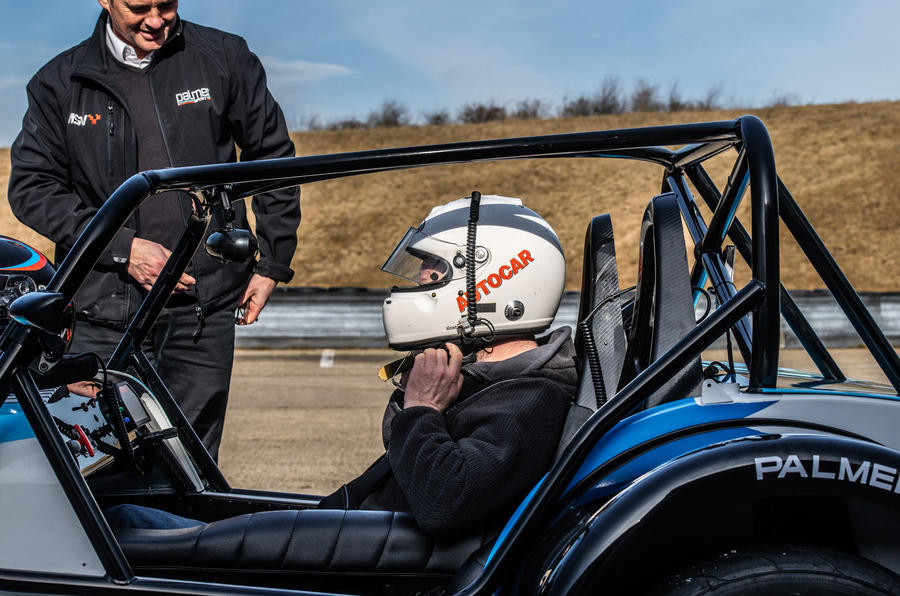 The car is the SV wide-bodied Seven, because clients are of all sizes and “you’ve got to fit them, in a minute. You can’t spend five minutes trying to get comfortable.”

At the heart of it is an engine and transmission of a spec not normally offered in a Caterham, a 2.5-litre Ford Duratec driving through a Sadev six-speed sequential gearbox, pneumatically operated by steering wheel paddles so drivers new to the car can forget about the clutch and gearlever once they’re rolling.

The 2.5, used in Ford SUVs overseas, is a version of the 2.0-litre engine fitted to cars (including Caterhams) in Europe, just stroked for more torque, which means it’s the same external size as the smaller capacity unit. 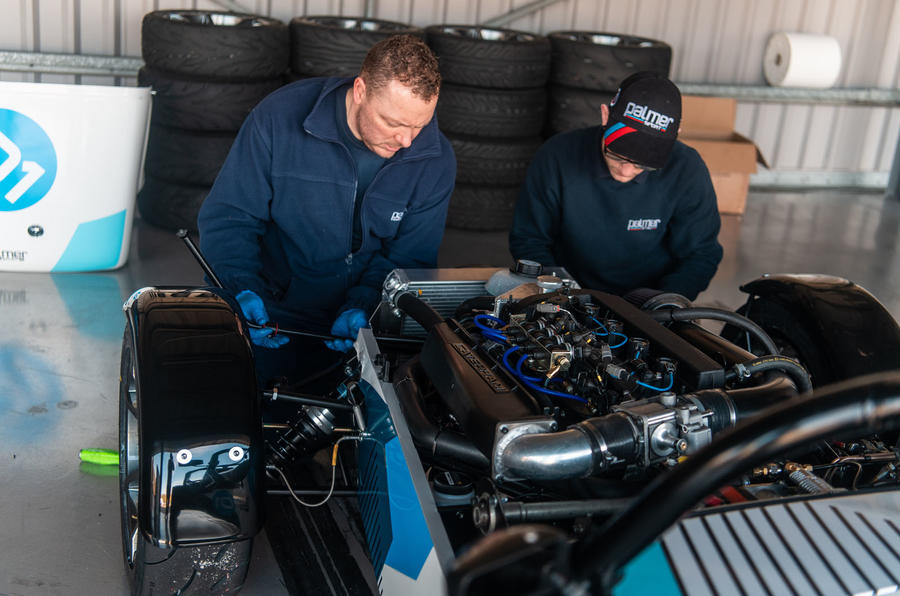 PalmerSport removes the surprisingly heavy counter-rotating balance shafts, lightens the flywheel and fits a dry sump. It runs, like most PalmerSport cars, on liquid petroleum gas (LPG), with a Vialle system injecting fuel as a liquid, rather than, as is more usual, a gas, so the air-fuel temperature is lower and power therefore higher.

Its output is 200bhp but, more importantly, “we want a responsive engine that’s torquey”, says Palmer. That the Duratec is naturally aspirated and relatively low revving, to about 6200rpm, is key.

Turbo lag or an engine that doesn’t come alive until 6000rpm is “irritating enough on the road,” says Palmer, “but put it on a twisty little circuit and it kills the enjoyment.” 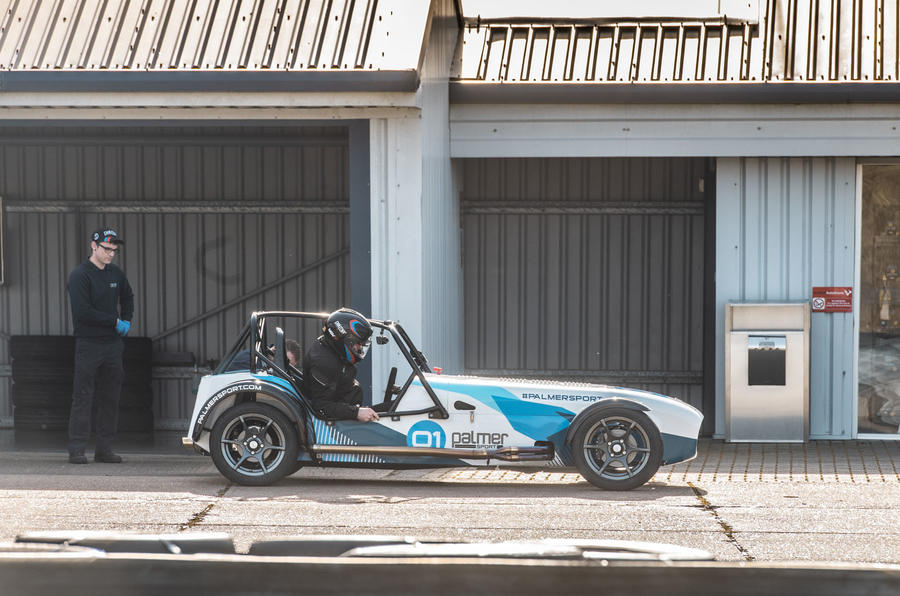 It’s mid-February and PalmerSport is in the midst of tuning the car’s handling for the circuit. And that’s where Autocar comes in.

We’ve been invited for a drive and to be the enthusiastic amateurs, to say what we think of the car’s handling while it’s being tweaked. Palmer and I will swap in and out of the car during the day, and his engineers and technicians will change the set-up.

There are various tyres, ride heights, springs, geometries and anti-roll bar settings to work through and Palmer goes about it with the kind of rigour for which the place – and the man himself – is renowned. At nearly £1000, PalmerSport’s days are expensive, but known as the best in the business. 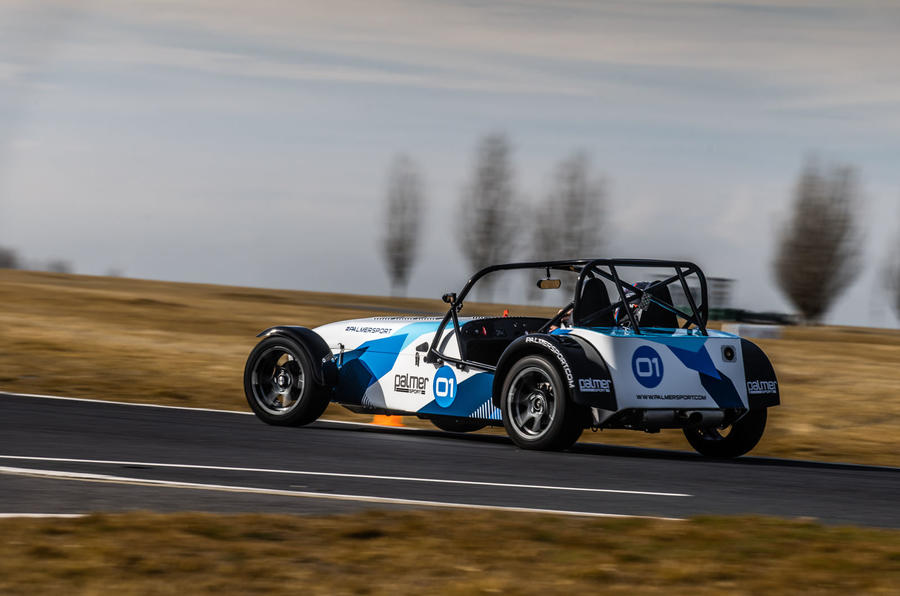 At the start, the car’s in a fairly standard set-up. It’s weighed at 641kg, on Academy race dampers with a standard ride height, and running 15in rims, with no front but a stiff rear anti-roll bar. There are some videos of the new Seven on

The car gets both faster and more predictable, but no less playful, and in the end, lowered with roll bars disconnected, is possibly the best Caterham I’ve ever driven. The engine’s broad powerband means you’re never left out of the rev-range, and the gearbox and its calibration are superb, letting you concentrate entirely on the handling. One final tweak reduces castor, and therefore steering weight, with no notable loss in steering feel.

The result is a really wonderful Caterham. The only time I might have had more fun in one was in a Supersport around the Rye House kart track. But this is, objectively and subjectively, better set up. 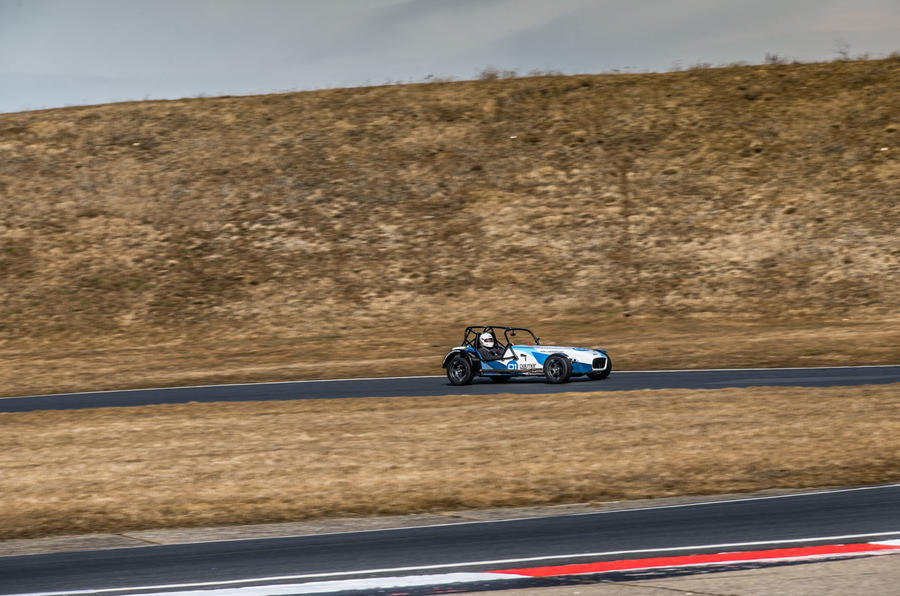 Jonathan Palmer’s organisation was recently given the go-ahead for its development of a former military airfield near Laon, France, which MotorSport Vision will turn into a 1263-acre autodrome.

The site will become, MSV hopes, “a mecca for the owners of supercars and other high-performance vehicles”, and will feature a myriad of different tracks. Five miles of main circuit that can be divvied up into different layouts, as Bedford can be, including the possibility of a 1.5-mile, 200mph straight. 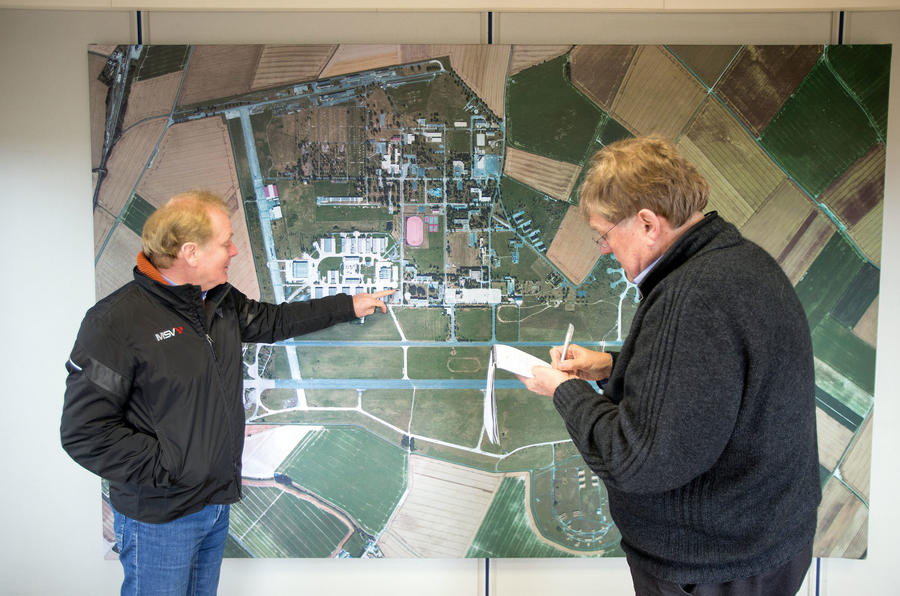 There’s also a two-mile urban road system, a 1000m asphalt oval and an eight-mile country road around the perimeter.

It has been designed to accommodate racing, with six major car and bike events throughout the year, corporate days, track days, motor industry testing and proving (a business park is on site), driver training, and corporate events and launches – trackside, there will be banquet seating for 500, and there are a number of hotels close by.

“To now have formal authorisation from the prefecture for our Laon Autodrome project is fantastic news,” said Palmer.

“This is effectively planning consent.” The facility is scheduled to open in spring 2021.

This article was originally published on 6 April 2019. We're revisiting some of Autocar's most popular features to provide engaging content in these challenging times.

Jolyon Palmer: how to improve Formula 1

. . .and it's tempted me to do another Palmer day.  As you note, they are the best in the business - it's most telling that the instructors can release the brake as well as push it.

Also, Laon will be superb, and as it's only 2 hours from the French side of Eurotunnel I predict it will become a place of pilgrimage for us Brits.

Have to say I agree with Mr Palmer's thinking: revving is fun until you hit the real world. My C7 was a 1.8 K-series for the same reason. Wonder if Caterham will respond with a 2.5 engine option?