Renault’s incumbent design boss has instigated a new era of modern style at the car maker. We celebrate his success
Open gallery
Close

Laurens van den Acker, Renault’s tall, soft-spoken head of design, may not look like a fully fledged revolutionary, but he has emerged from the past decade as one of the global automotive industry’s most effective disrupters-in-chief.

Within weeks of joining Renault in 2009 this friendly, 53-year-old Dutchman – working closely with a 550-strong creative team “full of talent from 30 nations” – devised a new direction of travel for Renault design and successfully sold its benefits to a management struggling with the effects of the financial crash. At top speed he set about revolutionising the look of every Renault, launching a series of beautiful models (and ditching duffers along the way) to place this most French of car giants on a recovery path it could not otherwise have achieved. 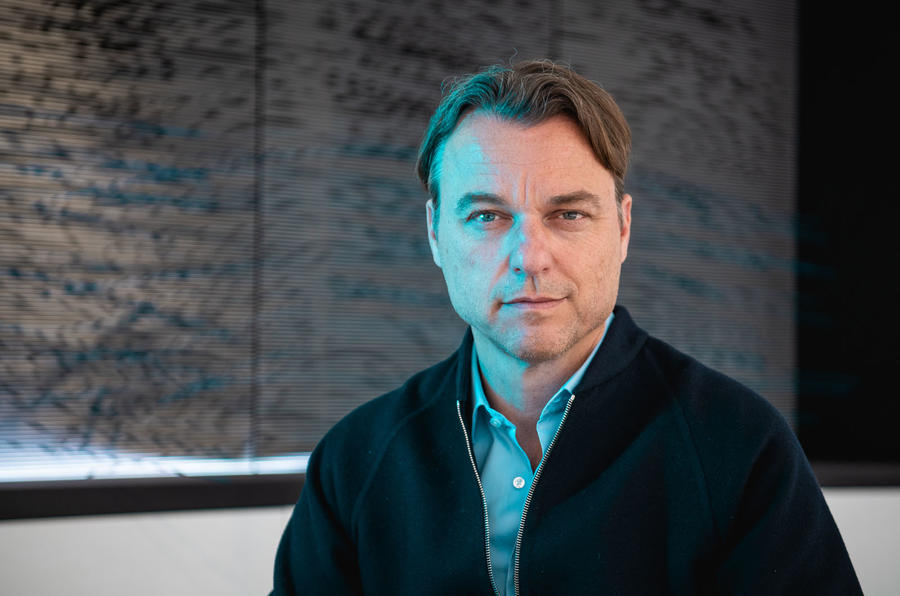 Not content with this, van den Acker and his henchmen also launched a clever and optimistic succession of concept cars aimed at restoring the emotional design values Renault had always embraced but which it had lately lost. They keep doing it. “Our concepts,” the designer explains, “are our promise to continue seducing our customers with emotional designs.”

Automotive design revolutions aren’t new. The usual approach is for a new designer to choose a convenient model then to work through the range, hoping for a styling coherence that becomes harder and harder to maintain. Van den Acker’s key innovation – and the reason he deserves Autocar’s 2019 Sturmey Award, handed to the industry’s great original thinkers – is that he discovered, articulated and put into practice a design vision for Renault’s entire output of vehicles. Renaults are “voitures à vivre, or cars for living”, he says, with each model distinct yet possessing a special family persona. 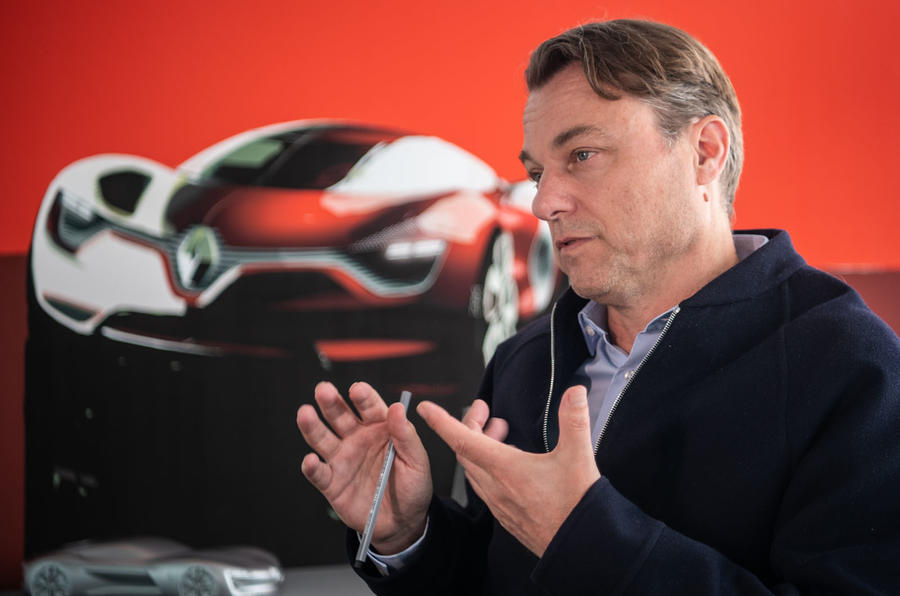 According to van den Acker’s core design vision, the progression of a human life can be represented as six petals around the centre of a flower – “a marguerite” – with the centre representing life itself. The first petal is love, generator of life, and the successive petals represent early exploration, marriage and family life, work life, recreation and accumulated experience. Each phase relates to a form of Renault mobility, and they’re all related. Thus a Renault Master van can relate to a Renault Clio or Espace. Or a Twingo or Renault Captur… And so on.

Van den Acker’s Renault journey began late in 2008 when, while happily ensconced at Mazda, he was contacted out of the blue by Renault and offered the design chief’s job. Global industry was grappling with its worst financial crisis for decades. Amid the uncertainty, van den Acker was inspired by then Renault chief Patrick Pelata’s simple instruction to “make great cars”. It was the perfect brief. By February 2009 he had agreed to join Renault; by May (after a month to polish his French conversation) he was working alongside the eminent, outgoing chief Patrick Le Quément; by September he was in charge. 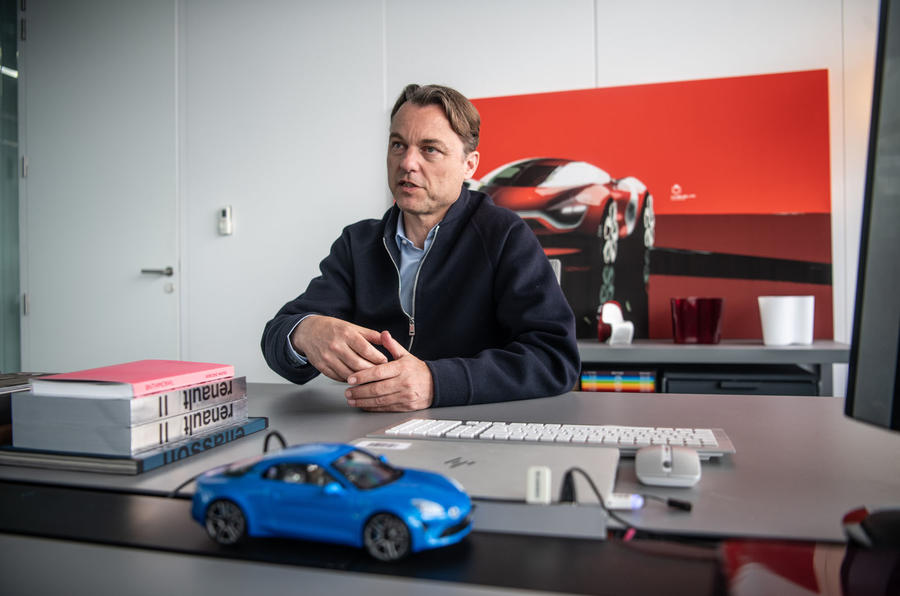 “Renault design has an incredible reputation,” says van den Acker. “It was clear from my first day that we have wonderful talent here. And Patrick Le Quément had moved design to a high level: we weren’t responsible to engineering or product planning but directly to the CEO. But times were very tough; it felt like the sky was falling in. And people who had loved Renault for years had fallen out of love with our products.” Critics talked of a disconnect between Renault’s excellent concepts and its dowdy, disparate production models.

“Everybody knew changes were needed,” says van den Acker. “I was the new guy and time was short. I couldn’t take time to understand the Renault ethos; something had to be done. But I also knew there would be a honeymoon period. Not a long one given the financial climate, but from experience I knew that your new bosses can’t kill your very first idea.

“I decided to push this opportunity to the limit by coming up with a concept that would have the quickest possible impact. It had to show our new direction and reveal our new design DNA. We also had to demonstrate our optimism for the future. So we came up with a two-seater sports concept called DeZir and showed it at the Paris show in the second half of my first year.” 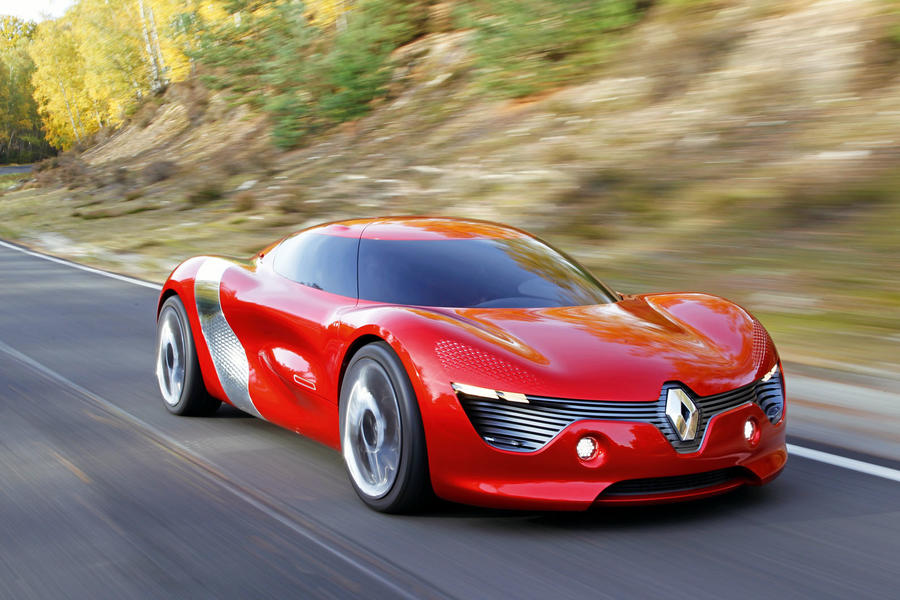 “We needed that car to create a ‘wow’,” says van den Acker. “It didn’t need to be intellectual, just beautiful. I asked my designers for something gorgeous for two people. This was how they responded.”

Critics briefly questioned the relevance of such an exotic concept in a time of crisis, but van den Acker soon silenced them by explaining the car’s relevance to the Renault aesthetics of the future.

“German cars were very Teutonic,” he explained, “and Fords and Hyundais very kinetic. There seemed to me an empty hole in the design spectrum of mainstream cars for sensual, gorgeous designs – the place once inhabited by Alfa Romeo and Fiat – which was now open to us. This was our chance.” 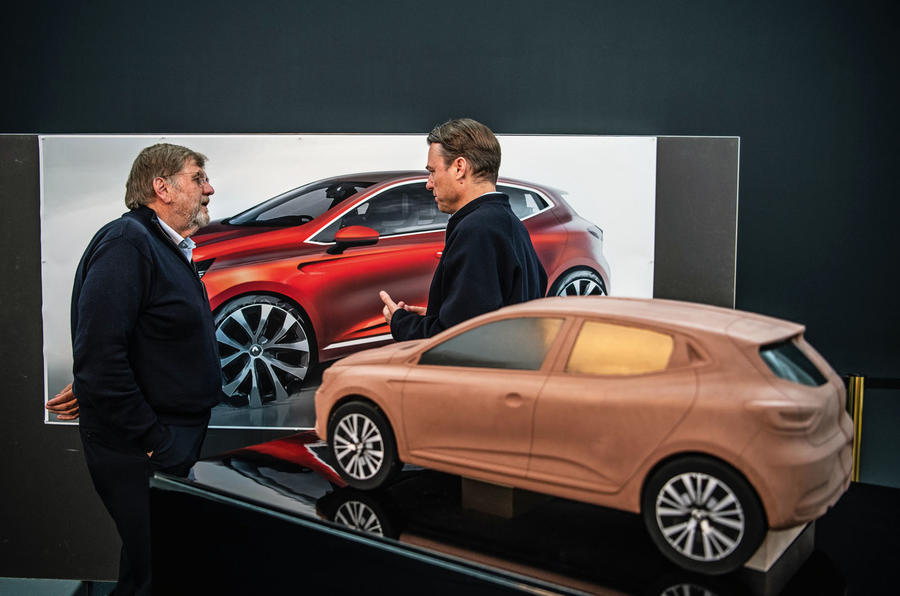 Happily, says van den Acker, the fourth-generation Renault Clio supermini was in its early development stages when he arrived. It provided the perfect opportunity for Renault to express its new design values. The DeZir’s influences would appear first on the Clio, Renault’s biggestselling model. It was the perfect test. “Being popular is noble,” he says. “Some designers only want to do Porsches. But we were lucky to move straight onto Clio.

The new model received a tumultuous welcome when it appeared in showrooms in 2012, two years after DeZir, then in 2013 the supermini-based Renault Captur was revealed to even louder cheers: it instantly became the world’s best-looking B-segment SUV, expressing the new Clio’s design language brilliantly in a market sector rapidly expanding to fuel a sales recovery.

Suddenly the inspiration of van den Acker’s six-petal car-life philosophy was revealed for all. We’d moved from ‘love’ into ‘exploration’ and ‘family life’. It was suddenly easy to see how an entire redesigned range could utilise the same philosophy. It’s a gross oversimplification to say that extending this approach right through the Renault range – Twingo, Renault Zoe, Espace, Trafic and all the others – was easy, but compared with the creation of that first inspired trio of DeZir, Clio and Captur, it certainly proceeded with less controversy and much more general approval. 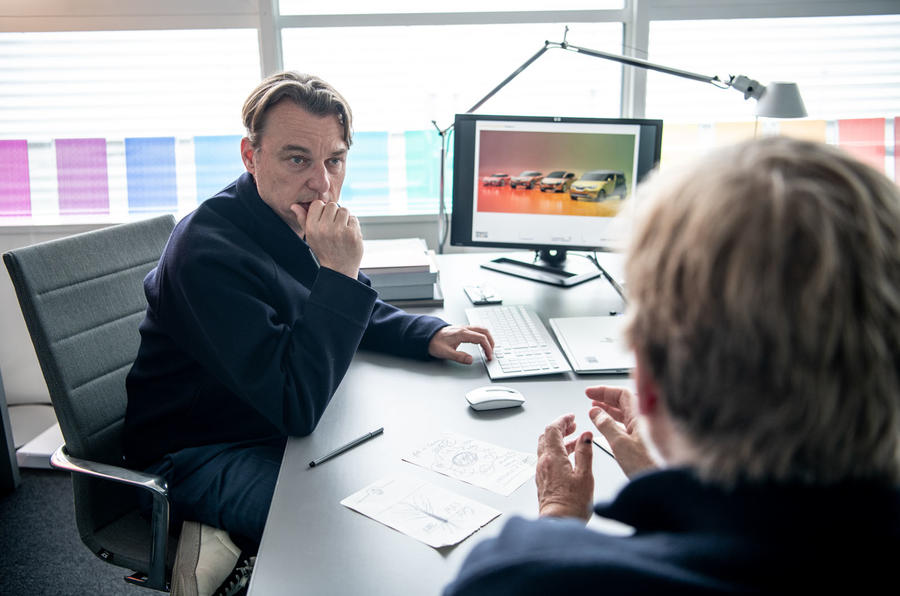 Along the journey, a series of eyegrabbing Renault concepts appeared, aimed initially at selling the new look and philosophy (DeZir, 2010) but later promising that the progress would never stop (the Trezor of 2016 and the EZ-GO of 2018).

Then a couple of months ago, a new design phase began. Van den Acker and his notably tight-knit team, united by their recognition of a market-leading project and their respect for its leader, launched a fifth-generation Clio, the first time one of their new generation had been renewed. However, having the opportunity to criticise your own work is positive, says the designer.

“One good generation isn’t enough to build a strong brand,” says van den Acker. “You need at least two generations – to fix issues with the first model, to stay consistent and strong, and to give customers even more reasons to buy our cars.”

And after that? “Maybe you do a third generation, or maybe it’s time for someone else to give the range a different push. In design, you have to stay humble. Whether I’m the right guy to do a third generation is a question that certainly will need to be asked. But maybe not yet.” 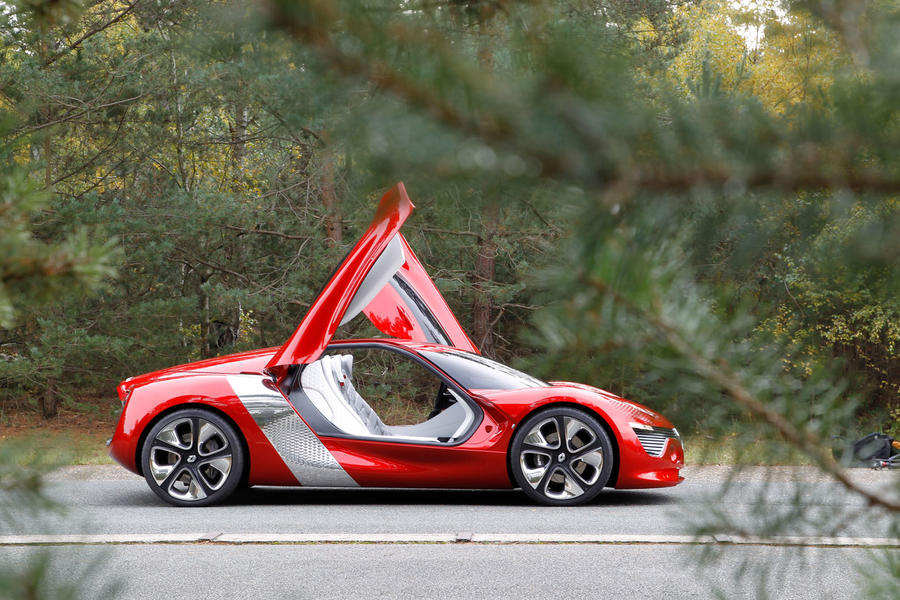 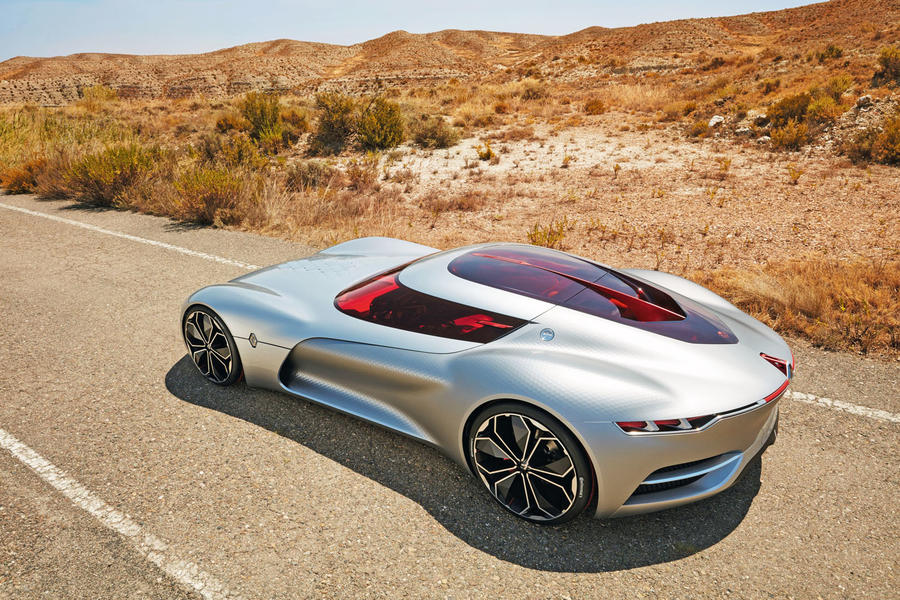 Renault Trezor: Another two-seater concept but much more radical than DeZir, electrically powered, with autonomous capability. Designed to promise an exciting future. 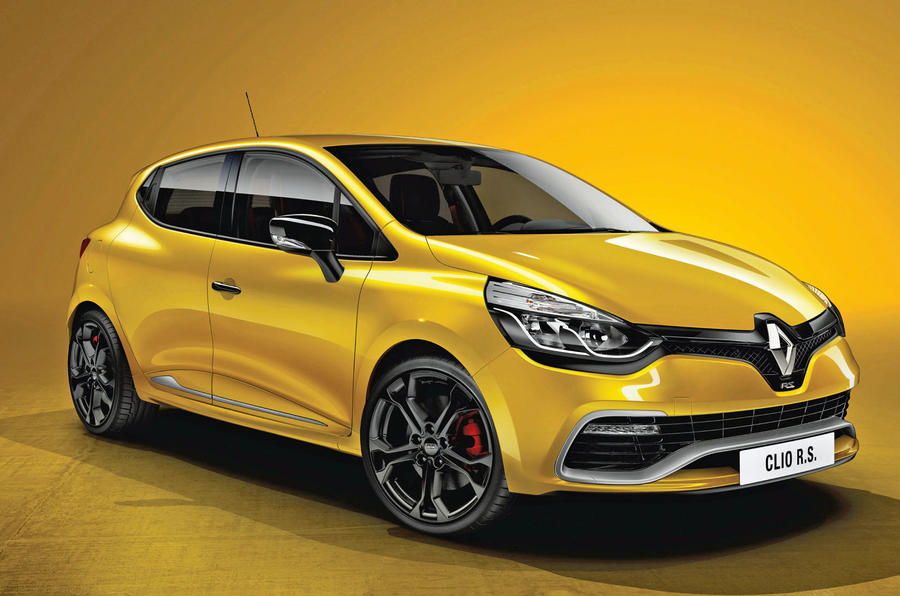 Renault Clio 4: First expression of DeZir design influences in production, rapturously received in the market. “It might look easy but it wasn’t,” says van den Acker. 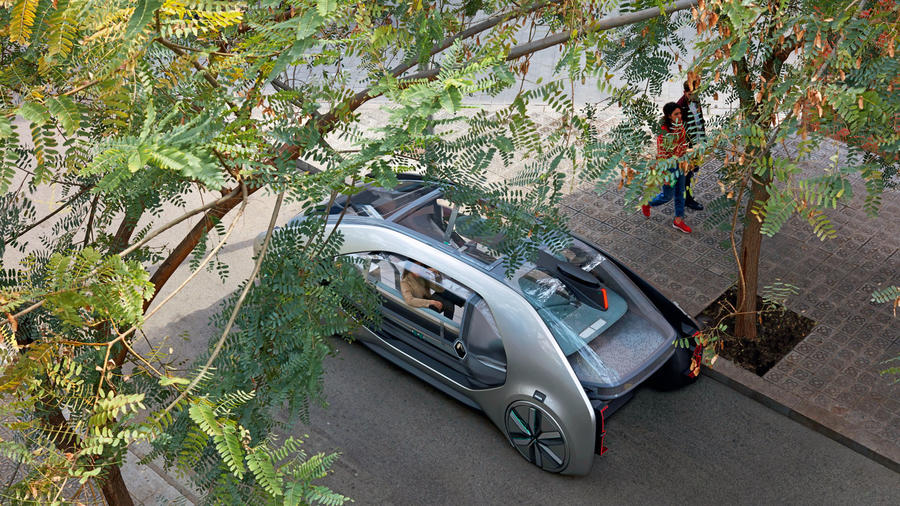 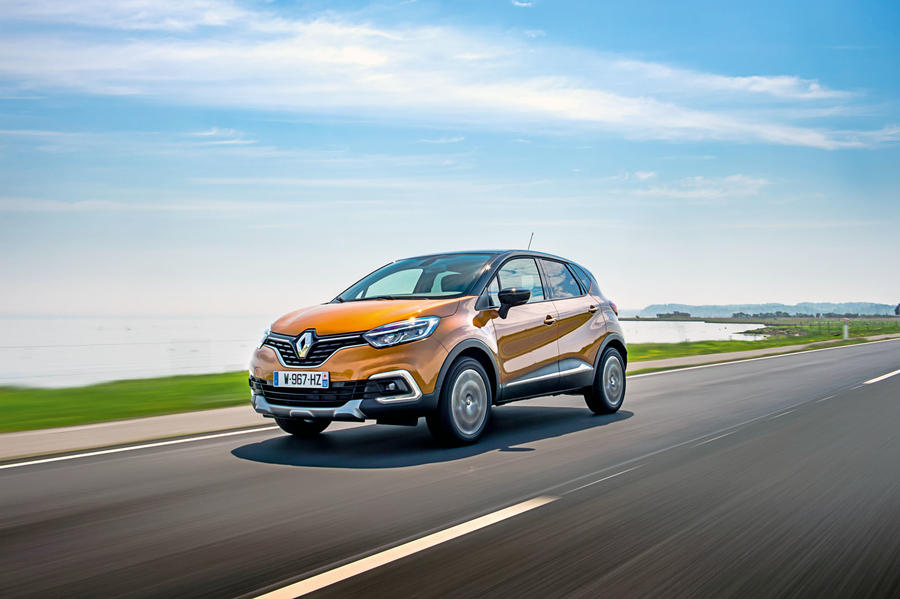 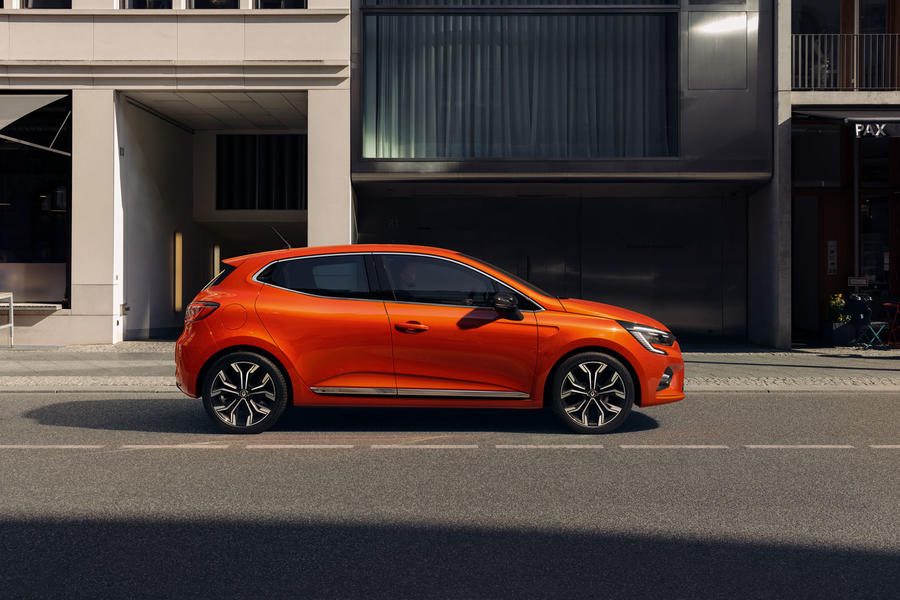 Renault Clio 5: Replacement for original van den Acker Clio 4 aims to reinforce strengths of its predecessor and “fix its issues”. No design is perfect, its designer says.

His career challenge: “In hindsight my whole career led to this. I learned to design in Germany, to manage in Japan, had fun at Mazda. But Renault had big expectations. Was I the right guy?”

Designing the Dezir: “We started with the whole team, chose seven proposals and soon cut it down to four, then one. The first concept had to be gorgeous. We did DeZir and Clio at the same time.”

Renault’s early problem: “I needed to find what was wrong. Was it talent? Politics? Management? Many people loved Renault, but there was nothing to fall in love with.” 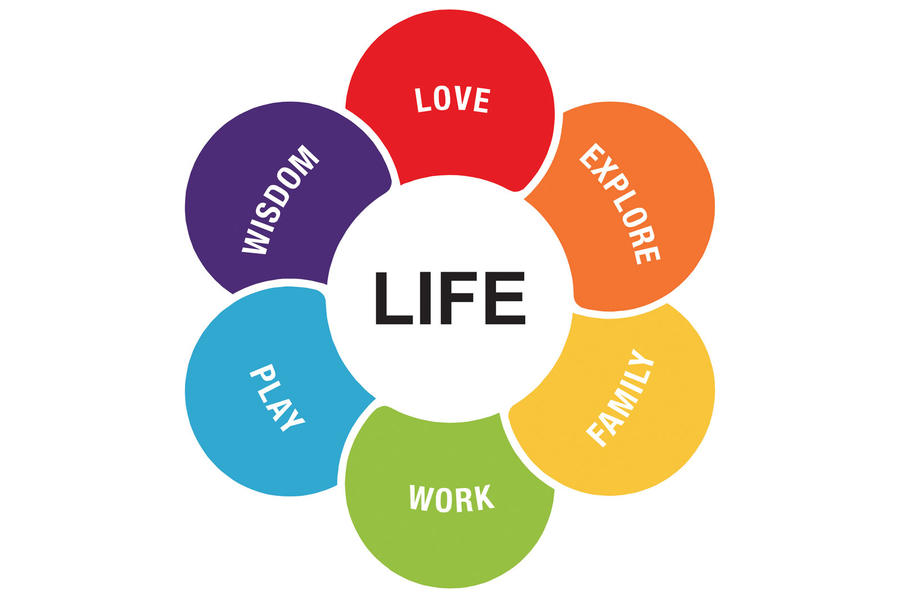 Creating the ‘flower’ philosophy: “I did that in my first two weeks. I was the new guy, times were tough and there was no time to lose. I worked flat out. You can cover lots of ground if you work 24 hours a day.”

Selling the new approach to his bosses: “I met Patrick Pelata to explain my love-explore-family flower idea. His eyebrows went up, but he didn’t say anything. I’ve learned if they don’t say no, it’s a yes.”

Finding ‘Frenchness’: “This is my seventh country. After a while you learn that you’ll be happier and get on much quicker if you do your best to grasp the culture, rather than questioning it all the time.”

Rigours of the job: “We have 550 people here, and we’re always running 50-60 projects at a time: facelifts, show cars, advanced projects as well as new models. So there’s plenty to do.”

Making ‘happy’ Renaults: “At first people told me Renaults looked ‘triste’ or ‘gris’ — sad or grey. My strong feeling was we had to bring the colour back. Renaults must convey the joy of life.” 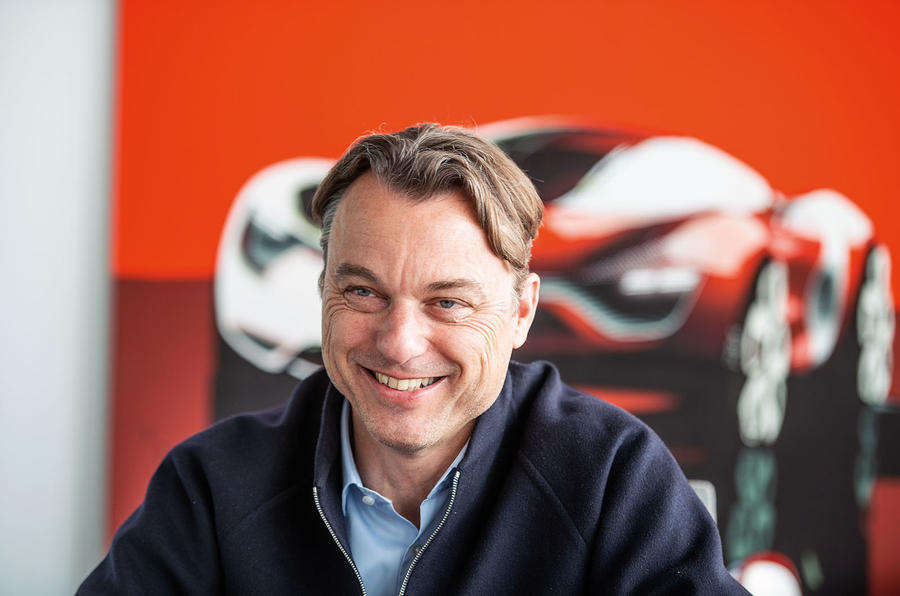 His proudest achievement: “If I’ve designed anything good at Renault, I think it is this flower concept, the marguerite. It has guided us to the success we have achieved with our new models.”

Faults and foibles: “Car designers aren’t artists. You must design for your company and situation, not for yourself. In my early career I took a while to learn that. The results aren’t hard to find.”

All-new Renault Clio is firm's most advanced supermini yet​

"every Renault, launching a series of beautiful models" why don't they sell these beautiful Renaults then?

They sell it, and sell it very well, they just don't sell in the UK, because for you only cars made in the island is good! Look to Renault sales before Van der Acker and after!