BACK TO ALL NEWS
Currently reading: Volkswagen unveils new branding as part of company-wide reboot
UP NEXT
New Kia EV9 primed as premium electric range-topper

Volkswagen has unveiled a new brand identity alongside the pivotal ID 3 electric car at the Frankfurt motor show today (Monday), as it attempts to draw a line under the fallout from the Dieselgate scandal.

The revelations in October 2015 about how the firm had cheated diesel emissions tests sparked a clear-out of its leadership group, and sparked a heavy investment in electric technology. The first result of that will be the ID 3, the first car based on the VW Group’s electric-only MEB platform.

The new logo is a two-dimensional design in order to work better on digital platforms, with thinner lines. While it maintains the company's traditional 'VW' roundel design, the letter W no longer touches the bottom of the circular frame. The firm while also adopt a more flexibile use of colours, for example with the logo set to appear in red on future GTI models.

As well, the logo will be accompanied by the new use of a 'floating line', and Volkswagen is introducing a new official female voice, and a 'sound logo' for use in television adverts. The firm has also introduced a new font, along with other changes.

The redesign is the work of VW design chief Klaus Bischoff, and will be rolled out across the firm's factories and dealerships in stages in the coming years. The firm estimates around 70,000 logos will be switched at more than 10,000 dealerships and service facilities in 154 countries.

Speaking at the unveiling, VW sales chief Jurgen Stackmann said: “The brand is undergoing a fundamental transformation towards a future with a neutral emission balance for everyone. Now is the right time to make the new attitude of our brand visible to the outside world.”

The roots of ‘New Volkswagen’ began following a board meeting after Herbert Diess took over the firm’s top role in the wake of the crisis. At that meeting, VW looked beyond Dieselgate, to the declining profitability of several models, the upcoming EU 95g/km emission targets and the firm’s struggle in key regions such as the US. 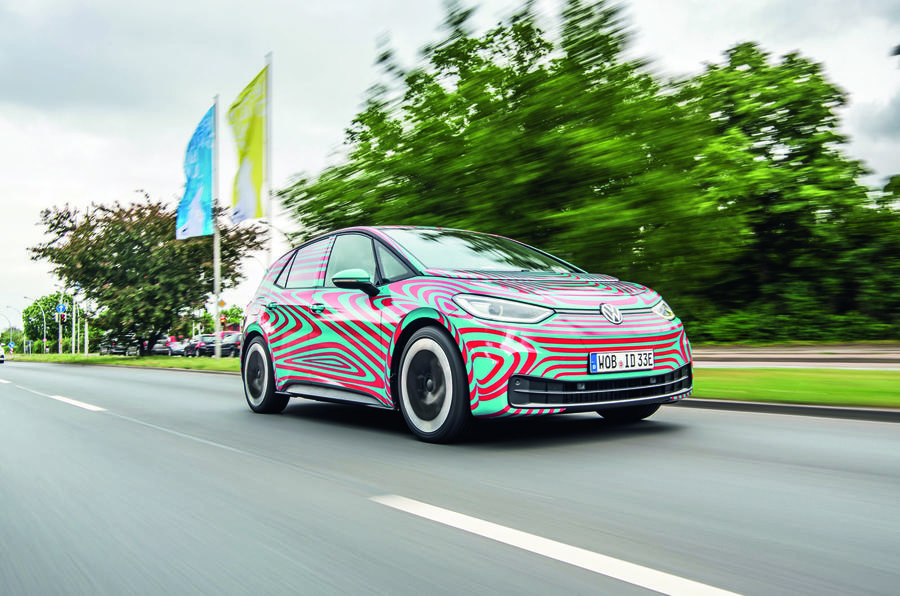 The result was the Transform 2025+ plan, under which several models were scrapped and extra focus was put on expanding VW’s SUV range. Diess also approved the development of the MEB platform and a push to electric cars, along with heavy investment in digital services.

The changes went even deeper: the firm spun off its components division and worked to cut the complexity of its line-up (reducing the number of parts offered, trimming its global model range by 50% and engine and gearbox variants by 40%). Those changes have already increased VW’s profit margin, from 1.8% in 2015 to 5.2% in the first half of this year.

Brandstätter also said the firm has introduced “a fundamental cultural change”, with a more open attitude backed by a new internal ‘integrity’ programme designed to stop a repeat of Dieselgate.

Brandstätter said: “It starts with the executives: we set an example. Everyone can stand up and speak out. As managers, it is up to us to listen and respond.”

The first phase of Transform 2025+ was about ‘fixing’ VW – and the rebrand is the culmination of that and the launch point for the next step.

VW’s first goal is to become a market leader in electric cars, with the aim of selling one million per year by 2025. Brandstätter described that as “the lodestar of our strategy” and the key will be the economy of scale enabled by both the flexible MEB platform and the firm’s bulk purchasing power when it comes to batteries.

The goal is to produce 15 million vehicles – of more than 20 different models – on the first-generation MEB, using eight plants worldwide. Brandstätter’s ultimate target is “emission-free mobility for all” – not just with a fleet of EVs, but also with a pledge for carbon-neutral production.

“When we drew up Transform 2025+ in 2015, we had no idea of the scale on which the social debate would shift to climate change,” Brandstätter said.

There’s a risk for VW here, given Dieselgate helped fuel opposition against combustion-engined cars. Brandstätter referred to “some hard lessons” the company has learned and that “our big size means responsibility”. The firm estimates that its overall operations are responsible for 1% of global CO2 production.

VW is also committed to increasing the ‘digitalisation’ of its products and company – including how it interacts with customers – and has invested £3.6 billion in doing so.

That includes a huge push to engage with customers online directly, starting with the pre-order process for the ID 3. VW customers will be given an online ‘ID’ as the first step in a new sales model next year. VW has renegotiated contracts with nearly all of its European dealer network to allow it to communicate directly with customers, effectively becoming a retailer rather than a wholesaler. That said, VW insists it will still work “in close co-operation with dealers”.

The sales structure will be key to other projects, including offering in-car online services through a VW.os system. It will also work with Volkswagen We, a network of services that include charging, delivery, parking and the WeShare car sharing scheme.

In a changing world, most other car firms are attempting similar transformations, but few have the resources of VW – or the impetus. Brandstätter said the transformation is “how we will once again deserve society’s recognition”. If it succeeds, VW’s Dieselgate shame could be the driving force for its future success.

Opinion: Why Volkswagen needs to reinvent its image​

Except there is no style to this, a 5 year old could do better.

The more I see at it the

Hmm well in true VW fashion (when it comes to design and styling at least) much rhetoric prior to an unveiling, reveals a sense of deflation...

Anaemic, weak, lacking robustness and devoid of visual strength for this new logo.

You'd think the PR build up prior to its reveal would show off a dawn. Sadly it's a step backwards.