BACK TO ALL NEWS
Currently reading: Jaguar XE SV Project 8 breaks own Nurburgring lap record
UP NEXT
2023 Lotus Type 133 to be firm's most luxurious model yet

The hardcore Jaguar XE SV Project 8 has broken its own Nürburgring lap record for a four-door production car by 2.9 seconds, lapping the circuit in 7min 18.361sec.

The new time was set by Project 8 development driver Vincent Radermecker, who was also at the wheel when the car initially broke the record with a 7min 21.23sec lap time in November 2017.

The record was previously held by the Alfa Romeo Giulia Quadrifoglio, which set a time of 7min 32sec in 2016.

No modifications were made to the Project 8’s 592bhp supercharged 5.0-litre V8 for the improved time, but Jaguar said a set of new Michelin Pilot Sport Cup 2 R road tyres were fitted to “maximise performance and steering precision”. 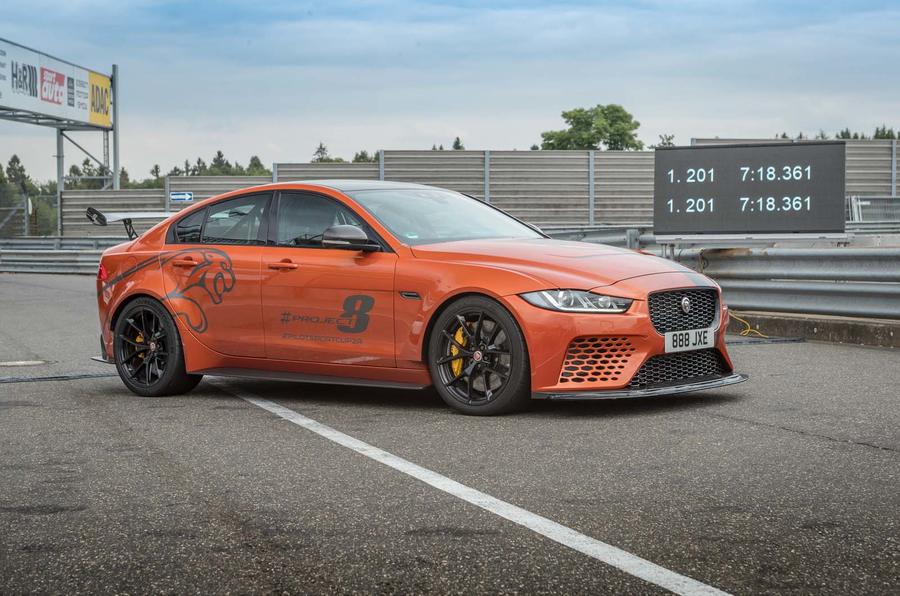 “This new official record time is a fitting reward for everyone who has played a part in pushing the boundaries for our customers with Project 8.”

The news comes as Jaguar prepares to wrap up production of the Project 8 later this year. It remains Jaguar’s quickest current model, with a 0-60mph time of 3.3sec and a top speed of 200mph.

The company recently launched a new Touring edition of the Project 8, featuring more subtle exterior styling. It is the most exclusive variant, with production limited to just 15 units.

Should that be allowed for a 4 door car?

All the models made to date

All the models made to date have been sold, there is going to be one model special final edition which is the one still for sale as no one is aware of its spec yet.

All the models made to date have been sold...

Which sounds rather meaningless as no doubt they are built to order, not for stock. Was everyone involved in this project so ignorant and/or arrogant to think that while BMW struggled to sell the M4 GTS, despite it's hugely storied nameplate and collectibility, they would fare any better with an XE?

They do not mention that a good portion of the track has been repaved and adjusted to be bumpy since the last record attempt.
View all comments (5)