BACK TO ALL NEWS
Currently reading: Revised Mini Paceman gets Beijing debut
UP NEXT
New 2021 Porsche 911 GT3: First ride in 503bhp flagship

Mini has followed up the presentation of its facelifted Countryman in New York with the unveiling a similarly reworked Paceman at the Beijing motor show.

The three-door Paceman gains a number of minor exterior styling tweaks including a lightly modified grille, new alloy wheels in sizes up to 19 inches in diameter, revised colour schemes and optional headlamps with an LED function for the daytime running lamps and fog lamps.

Recent rumours suggesting the new Countryman and Paceman may adopt a similar interior to the latest 2014 Mini hatchback have gone unfounded. Instead, Mini’s design team has concentrated on improving the existing interior with new anthracite coloured instruments and chrome applications within the air vents among other subtle changes.

Reflecting the changes made to the mechanical identical Countryman, the facelifted Paceman comes with an updated four-cylinder direct-injection petrol engine modified to conform to upcoming EU6 emission standards. The 1.6-litre unit continues with 120bhp in naturally aspirated form in the Cooper but gains 6bhp in turbocharged form in the Cooper S, which now boasts 187bhp.

In front-wheel-drive form the Paceman Cooper and Cooper S boast 0-62mph times of 10.3sec and 7.4ssec in standard six-speed manual guise, together with respective top speeds of 120mph and 137mph. Combined cycle fuel consumption on the European test cycle is put at 47.9mpg and 47.0mpg respectively.

Among the diesels are two carryover four-cylinder engines. They include a 1.6-litre unit with 120bhp in the Cooper D and a 2.0-litre mill with 141bhp in the Cooper SD. In front-wheel drive form with a standard six-speed manual gearbox, they boast respective 0-62mph times of 10.8sec and 9.1sec together with top speeds of 117mph and 124mph and combined consumption of 67.3mpg and 58.9mpg.

The Cooper, Cooper S, Cooper D and Cooper SD all come with an optional All4 four-wheel-drive system. Gearboxes choices remain unchanged, with a standard six-speed manual and optional six-speed torque converter automatic – the latter of which can be ordered with remote steering-wheel mounted shift paddles.

Continuing at the top of the Paceman line-up is the four-wheel-drive only John Cooper Works. It runs the same turbocharged 1.6-litre four-cylinder direct-injection petrol engine as the Cooper S, albeit tuned to deliver the same 215bhp as before. It boasts a 0-62mph time of 6.8sec, 142mph top speed and combined consumption of 39.8mpg in six-speed manual guise. 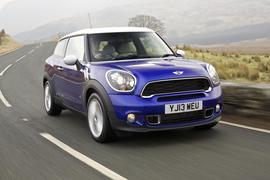 Most powerful, all-wheel drive diesel variant of Mini's distinctive new coupé offers more driver thrills than the Countryman on which it is based