BACK TO ALL NEWS
Currently reading: Autocar Awards 2022: Kia EV6 electrifies the competition
UP NEXT
New 2023 Audi A4 Avant undergoes tests in the Alps

It's one thing to move the game on with a car that costs well over £100,000, quite another to do it with a car that’s supposed to be vaguely accessible.

While it would be an exaggeration to say that the EV6 brings supercar elements to a family car, it does go further than most rivals to make everyday motoring feel special.

The styling isn’t for everyone, but the short bonnet, low scuttle, unusual profile and wild details make it stand out and draws comment everywhere.

The distinctive, innovative feel continues in the cabin, which uses the extra space and flat floor afforded by an EV platform to great effect. It manages to feel at once airy and cocooned, with more storage space than you could shake a Billy bookcase at and limousine-like rear leg room. Unlike a lot of recent EVs, it also has a healthy mix of responsive touchscreens and physical buttons.

Its technical make-up equally impressed our judges. It’s the first in an extensive range of cars and SUVs on Hyundai-Kia’s E-GMP platform. Although the battery is suitably large, at 77.4kWh, it isn’t the biggest in its class, yet the EV6 has a class-leading range, thanks to strong efficiency. 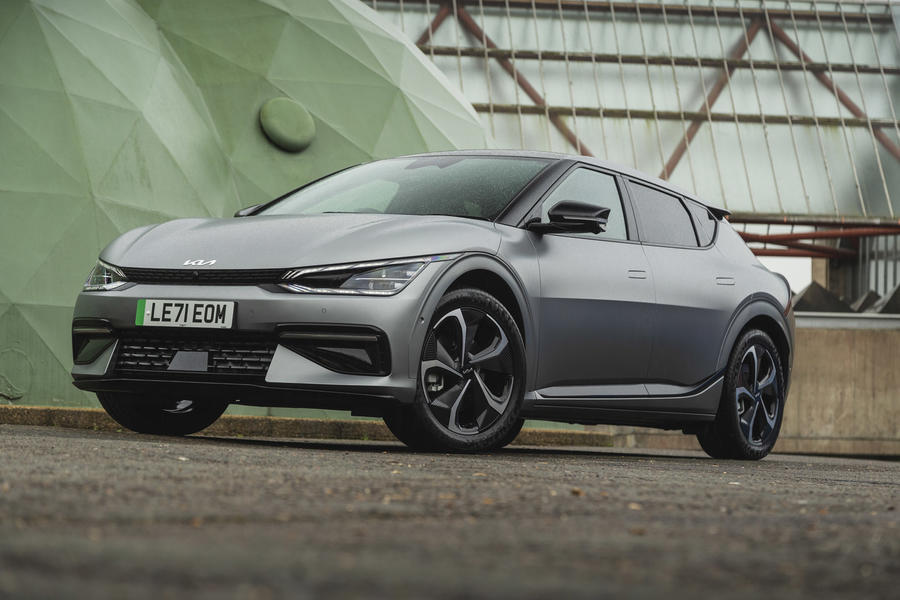 When the 328 miles do run out, it can be charged faster than almost anything else. Thanks to the 800V electrical architecture, the battery can be replenished at a rate of up to 230kW by the right charger. The only other cars that can match that are certain Teslas, the mechanically similar Hyundai Ioniq 5 and the much pricier Porsche Taycan and Audi E-tron GT siblings.

The EV6 wins out over its Hyundai cousin (which we wouldn’t hesitate to recommend either) thanks to its more engaging driving dynamics. EVs tend to suffer from excessive weight and often compensate with ultra- stiff suspension and overly cautious traction control systems.

The EV6 is still no magic carpet, but it strikes a great compromise between comfort and engaging handling that makes the most of its rear-driven platform.

Aside from being an excellent electric car in its own right, the EV6 also represents Kia’s coming of age. Over the past 30 years, the Korean brand has gradually worked its way up from cheap imitator through creditable value option to the technology and market leader that it is today. With the EV6, it has eclipsed its natural rivals from Stellantis and the Volkswagen Group.

The fact that a 577bhp GT version of the EV6 is coming next year suggests its end goal is loftier still.