The first modern-era electric car was ahead of the curve but compromised, with a range of just 90 miles and economic inviability leading to its downfall
Close

Last month, electric and hybrid models experienced another jump in popularity, taking 5.2% of new car sales in the UK with 8244 registrations.

Most of those will be hybrids, admittedly, but electric vehicles (EVs) are no longer a rarity. This is astonishing, really, given that the first mass-market model, the Nissan Leaf, only went on sale in 2011.

Only 15 years before that came the first EV of the modern era, the aptly named General Motors EV1 – a car that was, in many respects, ahead of its time.

The EV1 began life in 1990 as the Impact two-seat coupé concept car. The reaction to the Impact was so positive that the California Air Resources Board went on to mandate that 2% of sales by major car manufacturers in the state needs to be electric by 1998. Thus development of a production model began. 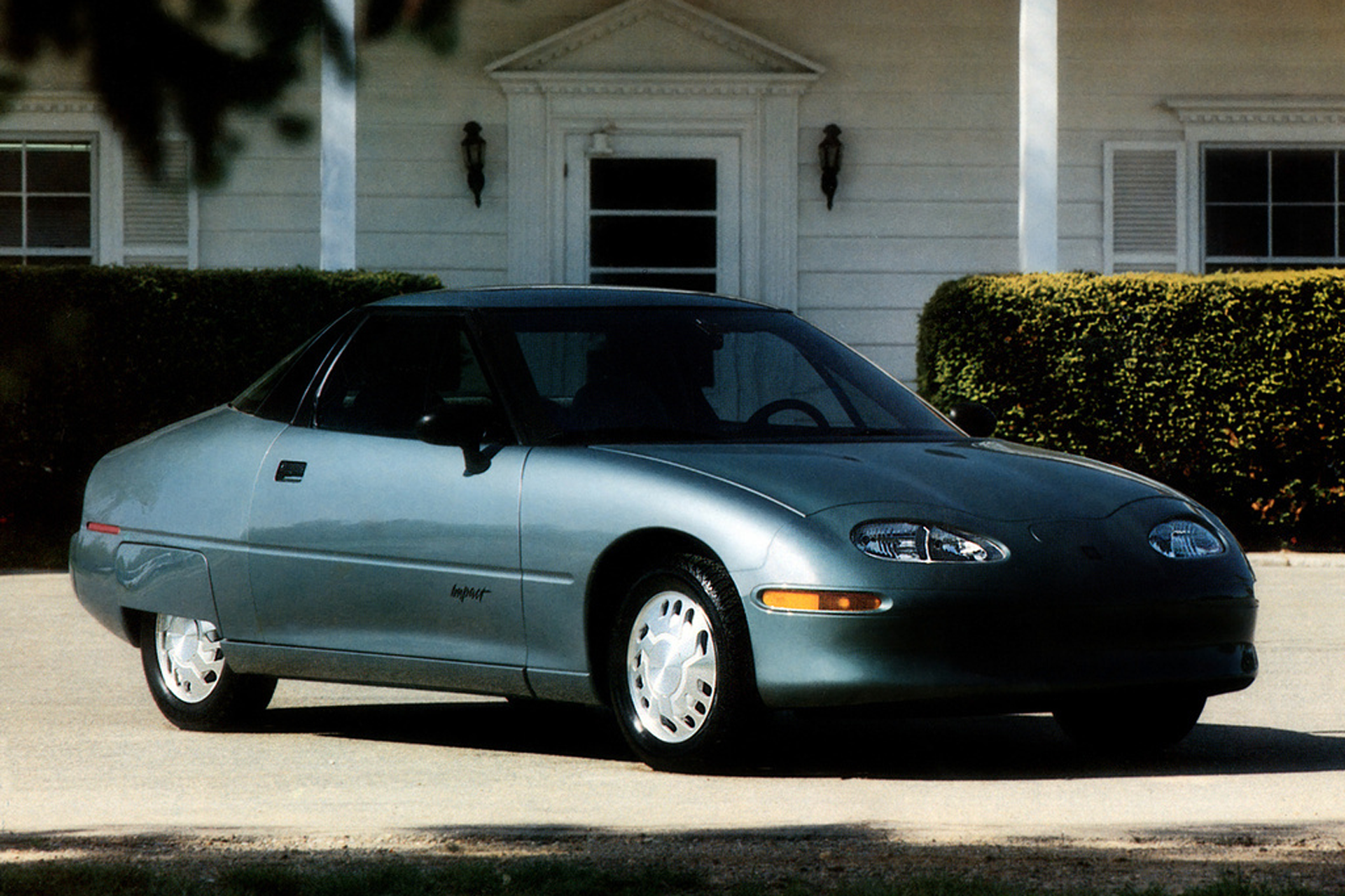 In April 1994, the 50 examples of the production Impact were issued to volunteers on a two-week loan. This scheme, named Preview, proved enormously popular but all examples of the car were recalled and destroyed at the end of the loans. Call it foreshadowing.

Development behind the scenes continued, resulting in an evolved version of the Impact, the EV1, that rolled out in 1996.

On 28 August 1996, Autocar's John McCormick travelled to the US to evaluate this pioneer. 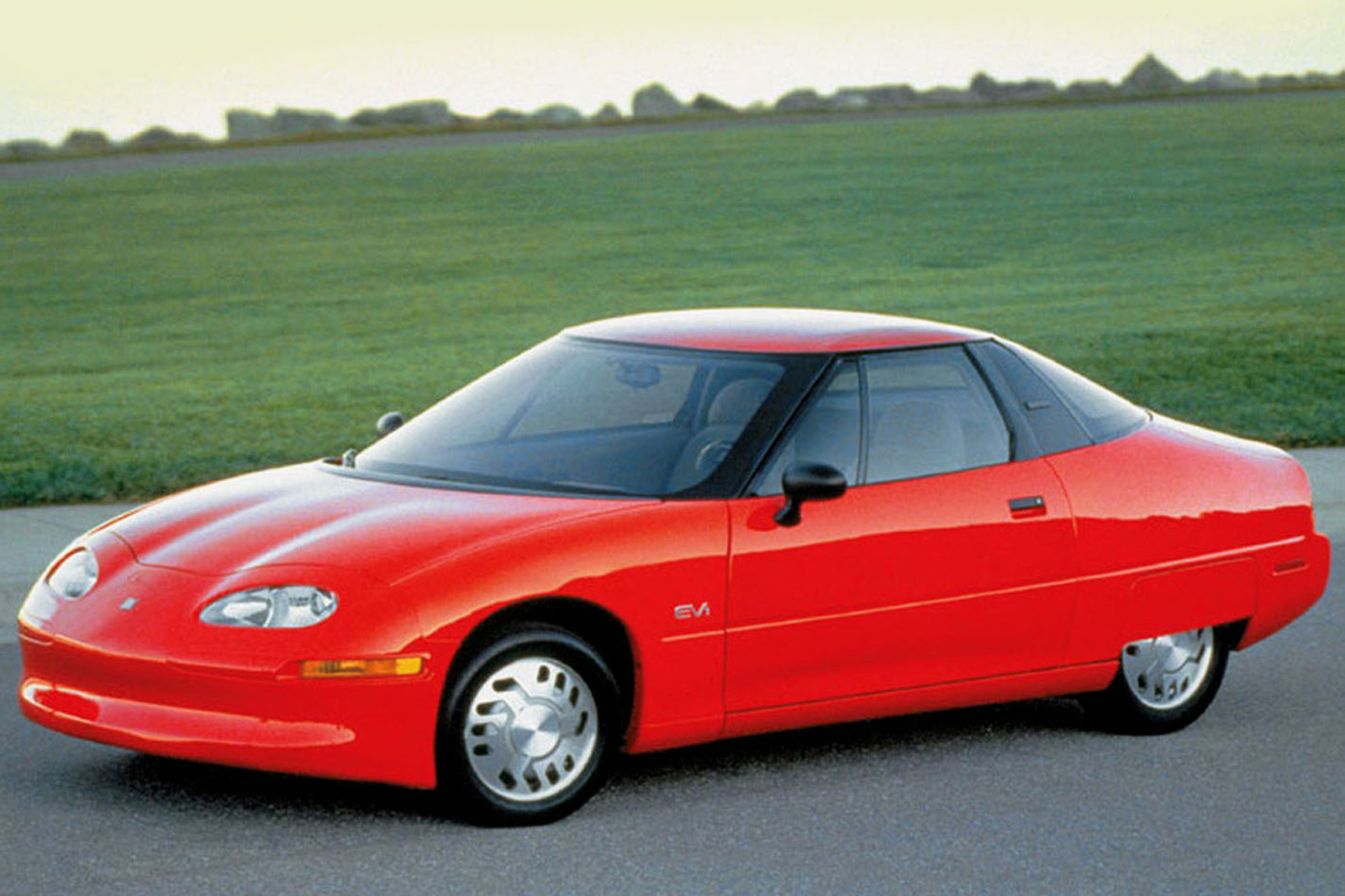 "The EV1 is based on a stiff and light aluminium structure," we explained. "It's powered by one electric motor, a three-phase, 137bhp (102kW) AC induction motor that spins to 13,000rpm. It is integrated into a drive unit that contains a two-stage gear reduction and differential. The powertrain weights 68kg (150lb) – one-third the weight of a comparable four-cylinder engine and transaxle. Naturally, there are no exhaust emissions and the motor requires no oil changes.

"A suitcase-sized box at the top of the engine bay is the brains of the EV1. Stuffed with Delco-developed electronics, the Propulsion Control Module (PCM) converts 312V of DC power from the 26 lead acid batteries into three-phase AC power. The PCM decides how much voltage to send to the motor (depending on accelerator position), when to turn the motor into a generator (if the driver presses the brakes) and when to switch the current phase (when the driver selects reverse). It also communicates with six other microprocessors that regulate everything from interior temperature to the charge state of the battery pack." 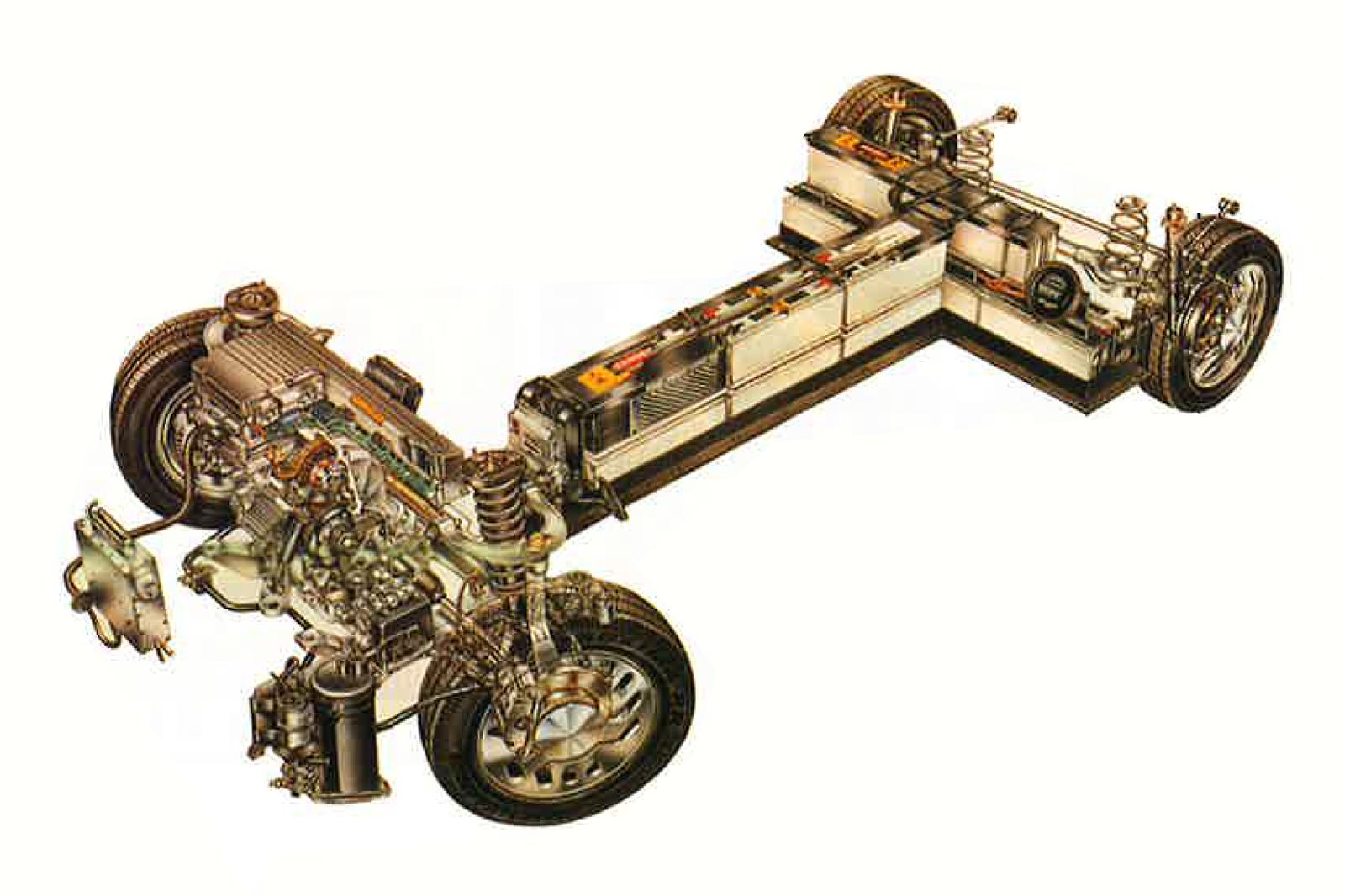 Then it was time to get behind the wheel. And even this was unconventional, with the EV1 unlocked and started not with a key but by entering a five-digit code via a pad outside the door and then by the gear selector. You then pressed a button, hidden in a myriad of others, marked Run.

"You know you have woken the EV1 up because the digital instrument display in the centre of the dashboard, plus rows of warning lights on either side, light up impressively for a moment, then turn off," we wrote. "But there is a disconcerting lack of noise. In fact, blipping the accelerator produces no effect at all; silence reigns.

"Time to move that shift lever from Park to Drive and try that pedal again. Gingerly, the EV1 moves off, accompanied by only a muffled whine under the bonnet. Confidence rising, you floor it and the result is a surprise. The EV1 bounds forward at a rate of knots. Fast enough that you quite believe GM's claimed 0-60mph time of less than 9.0sec."

"The EV1's front disc/rear drum brakes work just fine," we added, "and you have the curiously satisfying sensation of knowing that the braking action is actually recharging the batteries, because the motor is being temporarily used as a generator."

As for ride and handling, "you quickly realise that this is no sports car". We continued: "The skinny tyres, pumped up to 50psi, are designed for ultra-low rolling resistance, so understeer is the name of the game. Sharp turns make the 1747kg EV1 heel over clumsily, with the front corners of the composite-skinned body coming perilously close to the Tarmac. The electrically assisted steering has an impressively tight turning circle but loses feel when you put on some lock.

"As compensation for its roly-poly handling, the EV1 delivers a smooth ride. Wind noise is virtually absent, which is not surprising considering the exceptionally aerodynamic (0.19Cd) body. Road racket is also well muted, except when badly rutted roads upset the suspension."

GM's years of testing the EV1 had revealed it to have a realistic driving range of about 70 miles if you drove it near its top speed or up to 90 miles if you averaged around 45mph. 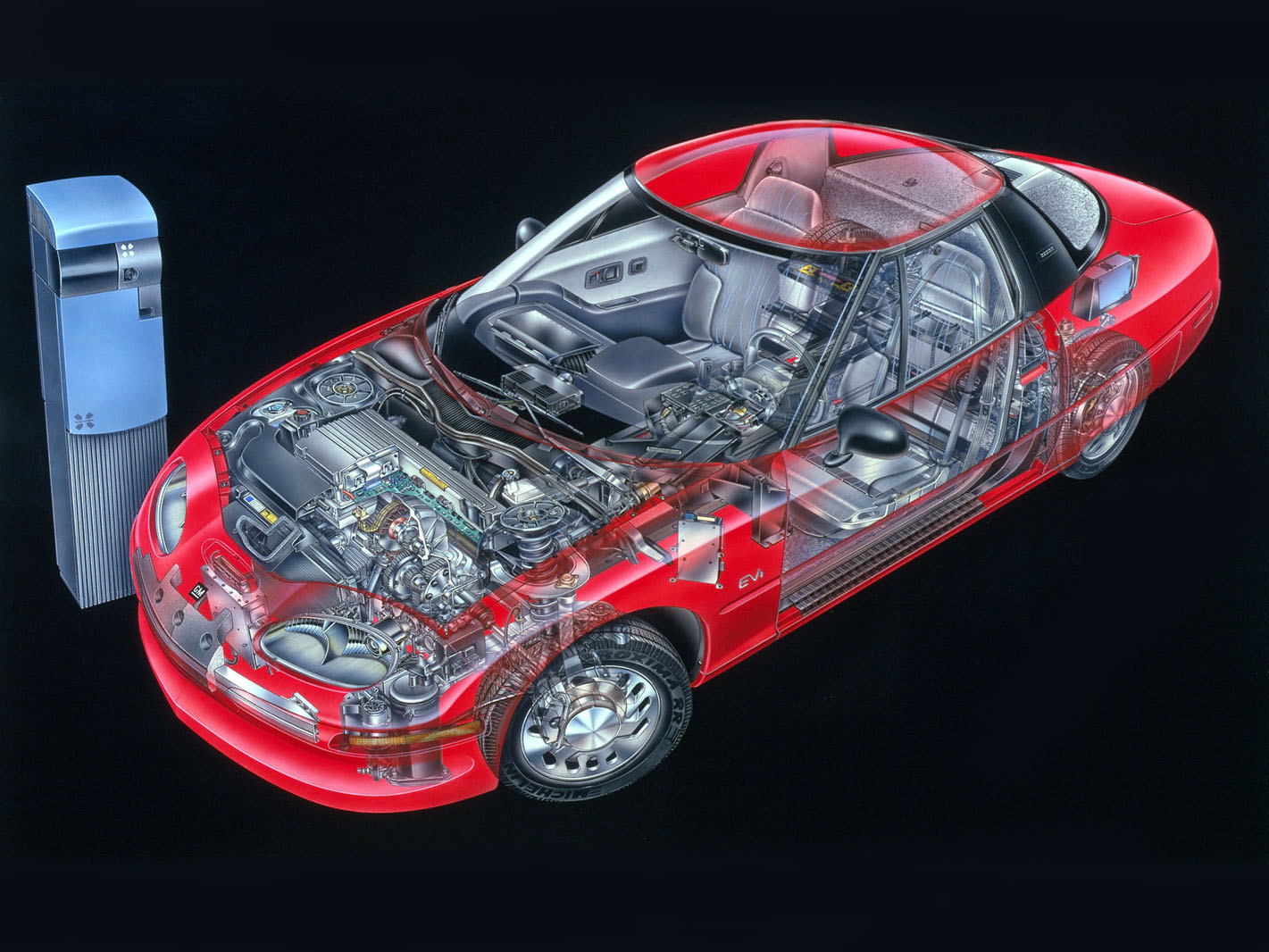 "There are two ways of checking range in the EV1. One is a 'state of charge' read-out, which displays the battery pack's energy level via a series of bars and is the equivalent of a regular fuel gauge. The other is a 'range remaining' read-out, although, confusingly, this display is ultra-sensitive to the way you've been driving over the previous five miles," we pointed out.

The primary – and quickest – method of refuelling the EV1 was with a Magne-Charge 220V inductive charger, installed in public areas and at drivers' homes. Charging took two to three hours. The back-up was a 110V portable charger, with a conventional plug, stored in the boot. A full charge from this took 12-15 hours.

We continued: "Up to this point, you can't help but be impressed by the overall driving experience. The EV1 is impressively quick, comfortable, manoeuvrable and boasts all the normal anemities. Furthermore, it is bursting with cleverly engineered features.

"There is no question that the EV1 is a technological triumph for GM but, at the same time, it's an essentially flawed endeavour. The sad fact is that the car is lugging around a whopping 522kg of lead acid batteries to go at best 90 miles. A car powered by an efficient conventional engine carrying the same weight in petrol could travel 10,000 miles. The EV1 is also hopelessly handicapped by the hideous expense of the batteries." 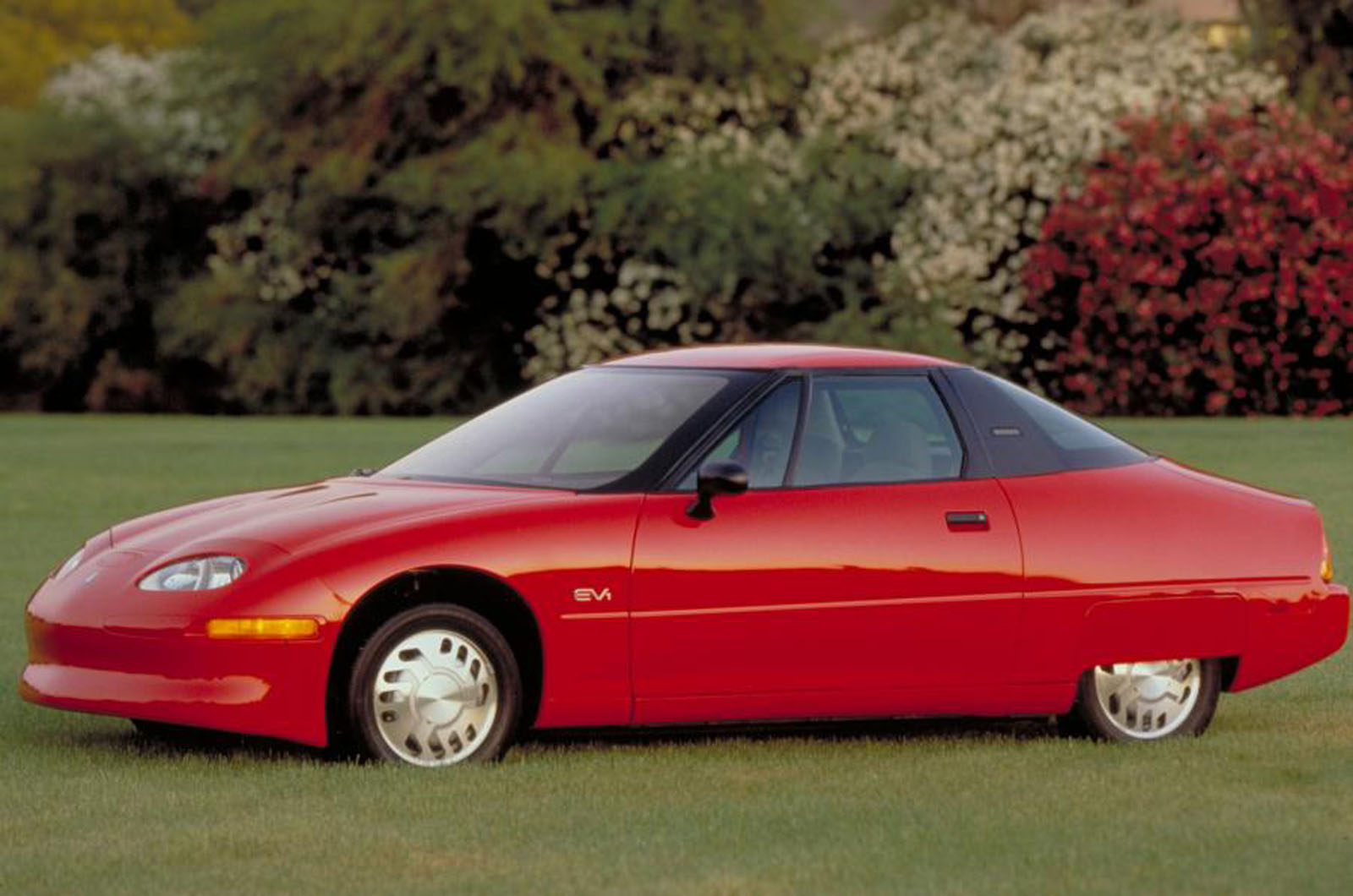 And so we concluded: "A great deal of electric cars' future depends on factors beyond manufacturers' control; government subsidies, tax credits and other financial support for owners could make a significant difference. In the meantime, GM deserves praise for creating a milestone in the evolution of the electric car."

In 1999, GM released a Mk2 EV1 that was lighter and had a longer range of 100-140 miles. However, it also had longer charging times due to the adoption of new nickel-metal hydride batteries.

In total, 1117 EV1s were produced but, in 2003, despite huge protest from the fanatical pool of drivers, all EV1s were reclaimed by GM. The official reasons cited were the unprofitability of production and maintaining a legally mandated servicing and parts supply infrastructure.

Around 40 were donated to museums and educational facilities, with (reportedly) all but one having their drivetrains deactivated.

Lighter, better range, promising, facing the future, venturing where Tesla still hasn't been until this day, ahead of the competition... and self-driving of course.

I know battery tech has moved

I know battery tech has moved on but this had a similar range and chardge time to a 20yr newer zoe or leaf. Makes me wonder where they could have been if this was continually updated.

Then the film, might even be on UTube now.

Ok half the range of Zoe (probably a third in the real world) but image where GM would be if they carried on. Still they've made up some ground with the Bolt which is meant to be first rate judging by the review

not a third but the newsest Zoe and Leaf have more than doubled the range in 20 years, it's near the point where most people will go for the cheapest battery option offered that'll do 300km's realistically which is the target Audi and Jag are aiming for.

The actual range of the zoe

Most people go for the 250 NEDC range model, Renault say you can expect 124(winter) and 186 miles in the real world. Way more than the non-production GM

Most people go for the 250 NEDC range model, Renault say you can expect 124(winter) and 186 miles in the real world. Way more than the non-production GM

Again that is the newer version, the original as long term tested by autocar is still available and is what I was comparing with, my point, which you seem to miss is that, if gm had continued with development, we could be even further down the road than we are now. Maybe even more people being able to use or even afford electric cars than currently.

Just got this snippet from an EV1 user in the king of the road website "EV1 is frequently 45 miles or even less.... ". the current Zoe would double that and it has way more safety tech and can seat 4

The general motors dive and

The general motors dive and getting the helpful economic leading the techniques as well,thanks for sharing. This feedbacks on such resume services blog always giving us and sharing positive production model and allowed the thoughts.