The Mangusta and Pantera are fine examples of gorgeous-looking, good-to-drive exotica from decades past.

Their creator, De Tomaso, is no longer. But, despite launching in 1971 and lasting all the way to 1991, the Pantera was not the last model to come from the Italo-Argentine car maker.

That would be the small sports car Guarà, of which around 50 were produced between 1993 and 2004, a year after the death of company founder Alejandro De Tomaso. 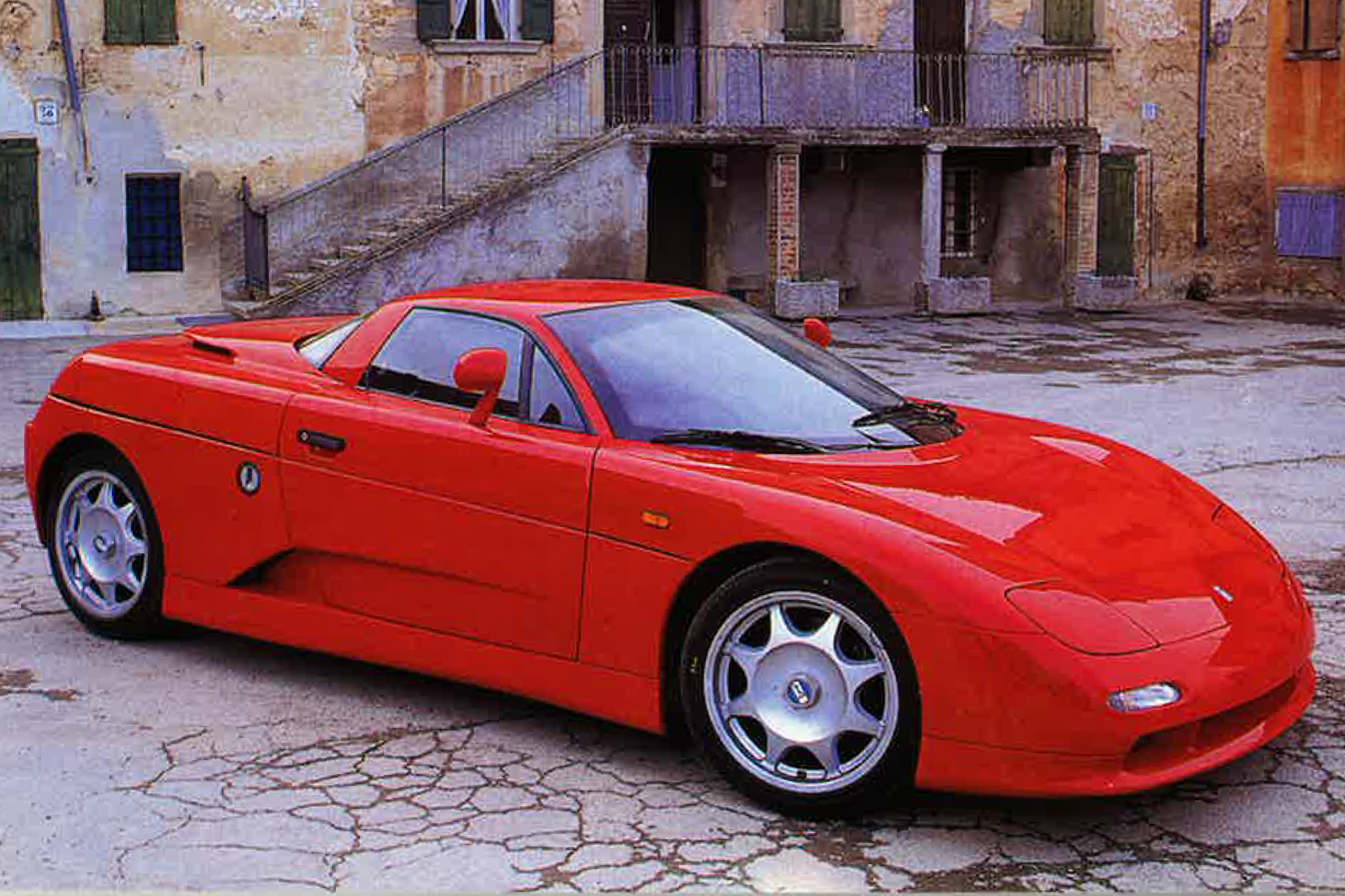 “It’s the contradictions of the Guarà that make it so fascinating,” we began.

"The car’s high-tech spec, so strongly orientated towards the track, leads you to expect to find a peaky, racing engine nestling at the end of the usual De Tomaso aluminium backbone chassis. Instead, you discover a stock BMW V8."

“The Guarà’s rubberless suspension, meticulous hand-built assembly and supercar looks contrast with the saloon-tuned 4.0-litre that puts out a mere 283bhp,” Robinson wrote. The car, we continued, was “the crutch charged with supporting the company until the arrival of the recently announced Bigua in spring 1997”. This model didn’t reach production until 1999, due to De Tomaso's struggle to keep afloat financially; when it eventually did, it was named the Mangusta. Before long, it was sold under the name of the company that built it, Qvale, and eventually went on to become the MG X-Power SV.

The Guarà, we said, “disguises its size, at least from some angles. From front or rear profile, it looks tiny, with virtually no rear overhang and a diminutive glasshouse that sits way inboard of the body sides. However, it isn’t able to disguise its daunting width. That’s a shame, because the other proportions are intelligently used to take advantage of the long wheelbase and mid-engine location and produce a taut, purposeful shape.”

The reason for this width was because De Tomaso had planned to enter the Guarà in Group C sports car racing, meaning it had Formula One-style rose-jointed suspension that “pushed its wheels further out than a pure road car would ever need”. In fact, the Guarà was 4190mm long and 2030mm wide. 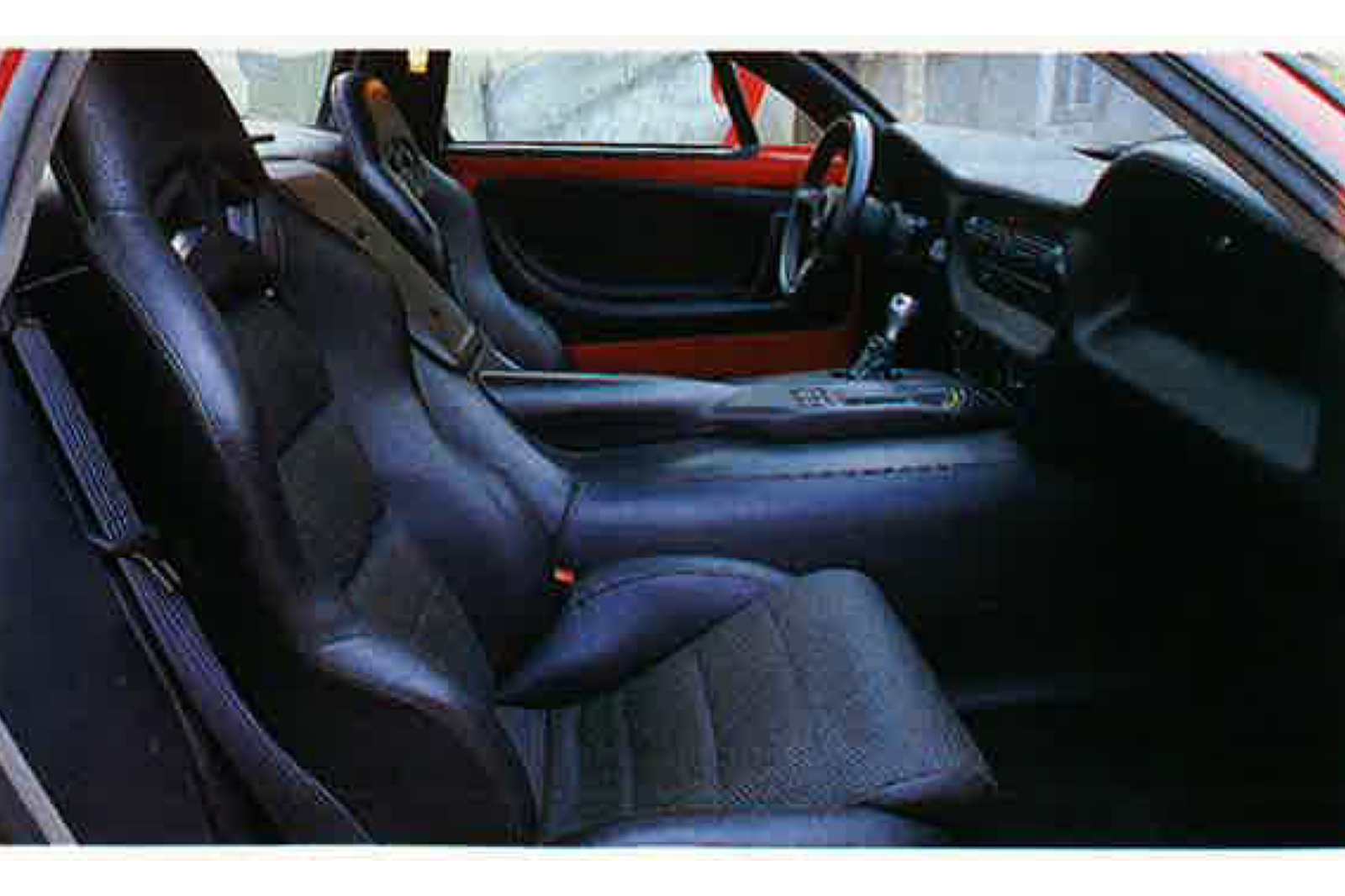 Inside, “it feels tiny, too, although the heavily bolstered seat and steering wheel are mounted higher than you anticipate and there’s actually plenty of working space. It’s reminiscent of the Alfa Romeo SZ, with the close proximity of the windscreen, the shape of the pillar and the way your legs fall down to sensibly spaced pedals." The plain dashboard had all of its elements sourced from BMW.

The article continued: “With a weight of just 1200kg giving a 236bhp power-to-weight ratio, you could reasonably expect the Guarà to feel almost as quick as the Ferrari F355, which has 268bhp per tonne.

“Maybe it’s the refinement of the BMW engine, or maybe the prototype we drove was out of sorts, but it never felt especially fast or dynamic. Yet, it’s the engine that makes this car so easy to drive. It’s tractable enough to run down to 1000rpm even in the incredibly tall top gear and still accelerate.

“Turn the thick-rimmed steering wheel and you find that De Tomaso still reckons a mid-engined car doesn’t need power steering, and that the rack and pinion steering is extremely heavy at rolling speeds, although this never again intruded once away." The BMW engine may have been refined, but other elements of the Guarà certainly weren’t.

“The shriek from the Getrag six-speed manual gearbox, mounted in front of the engine, never fades," Autocar wrote. "The engineers say production cars are quieter, but no car that makes a design feature of diagonal gear linkages running across a wide central tunnel can be expected to redefine automotive tranquility.”

Were we otherwise impressed, though?

“De Tomaso has set the red line at 7000rpm, but really there’s no point in exceeding 6500rpm because the rate of acceleration declines over that last bit. You could drive between 2000rpm and 4000rpm all day and still enjoy the performance. It has a claimed 0-60mph time of 5.0sec, but it never feels that quick. But keep the engine between 3000-3500rpm and there’s power enough to scatter the chickens on the shortest of straights.

“The car’s steering is precise and direct and there is real agility in its handling. The steering progressively loads up in hairpins but, because there is still true feel and precision, a long, hard drive on twisty roads never becomes a tiring task.

“You also learn to use the car’s power to balance the tendency for quite strong understeer. Go deep into a corner that you’re still on the brakes at the apex and the wheel needs a hefty lock to get through a bend.” 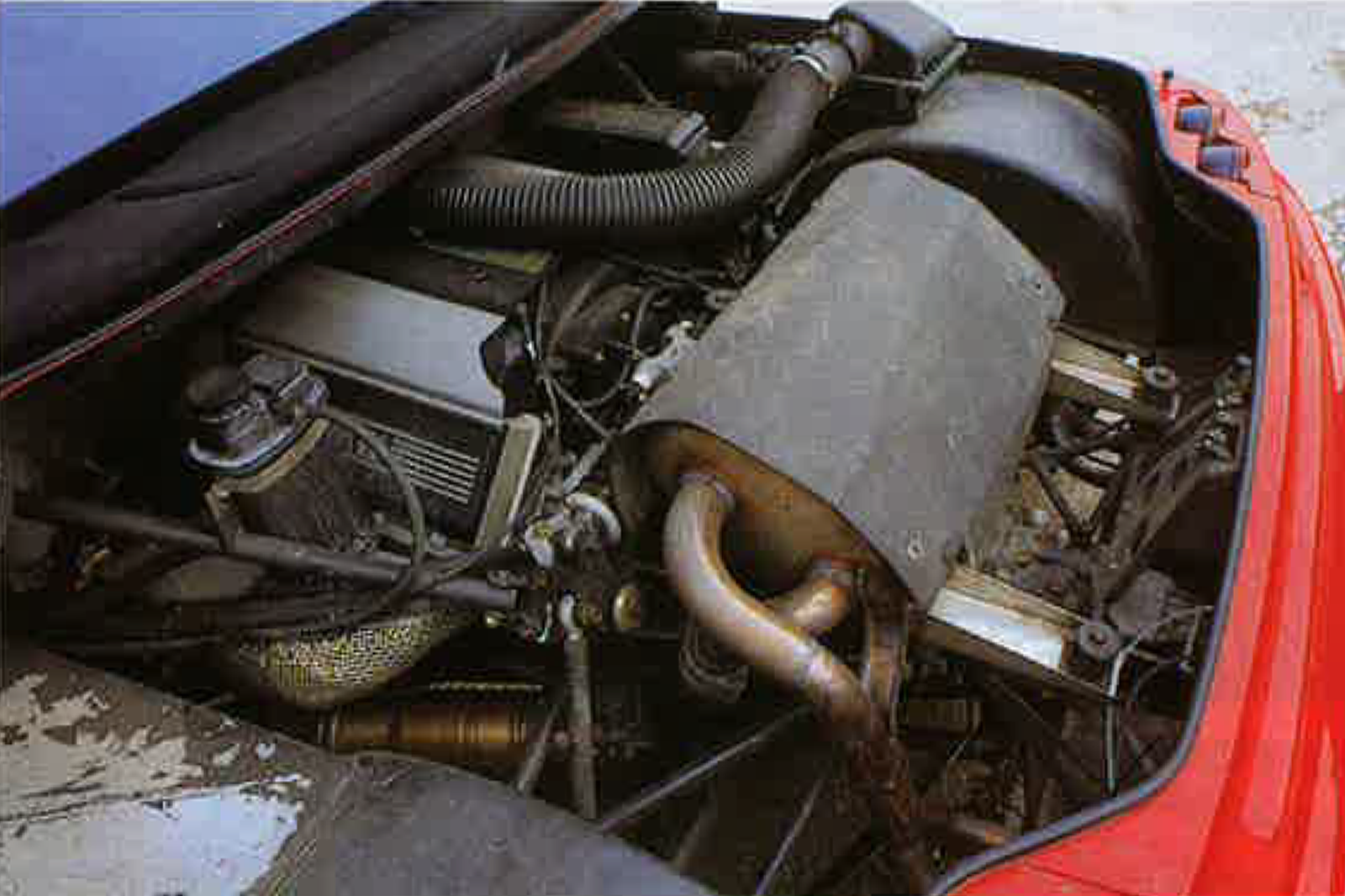 De Tomaso’s homologation expert did show our writer that the Guarà was rather apt to an “easily and accurately held” oversteer-induced powerslide, however.

“The secret is to defeating this understeer is to brake early and get the power on before the apex,” we continued. “The massive, unservoed Brembo brakes conspire against this, however, but only because they need heat to work well. Until them, retardation is slow. Once warm, they work superbly.”

The ride quality of the car was as you’d expect: “At low speed, potholes can cause the suspension to jolt, but on any undulating surface the nylon joints at the suspension mounting points work well and absorb most of the punishment before it reaches the cabin. On any normal road, the Guarà rides as well as a conventionally sprung performance car.” De Tomaso credited this ride performance to the “incredible stiffness of the car’s body structure”. 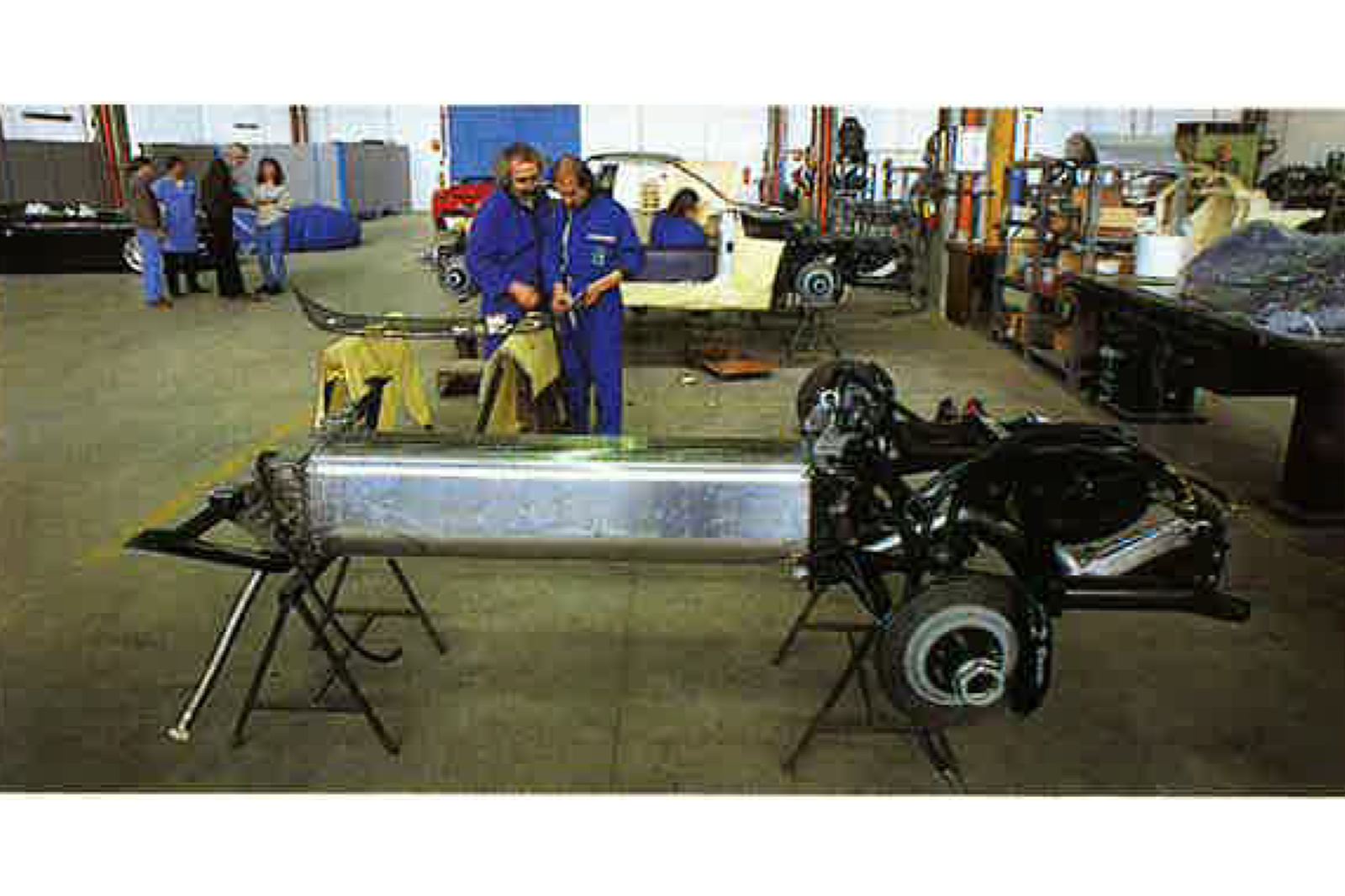 Unfortunately, the Guarà proved to be the last timid punch of a company that had started so promisingly. It didn't deserve to be, though, as we concluded back in 1996: “There is something very likeable about the Guarà, despite – or in part because of – the inherent compromises implicit in any low-volume car. Its very rarity makes it all the more desirable, of course.

“If the promised reduction in noise levels works, then this car’s one serious fault will have been eliminated. Then, the Guarà’s clear racing heritage, combined with the practicality of its basic mechanicals, can shine through.

“This is a car that deserves to succeed, beyond even four cars per month."

Not their finest hour

The wonderful Pantera and pretty Mangusta were always going to be a hard act to follow, but this is just so wide of the mark. The proportions are all over the place.

Yes, it looks the part from

Yes, it looks the part from the front and back, but the side view just doesn't look quite right, it almost looks like a pickup...

A bit naff looking,almost kit car from the 70's quality by the looks of it, unimaginative styling maybe too?