BACK TO ALL OPINION BLOGS
Currently reading: Matt Prior: Small cars are where the true luxury lies
UP NEXT
Estate cars: In celebration of a dying breed of car

Matt Prior: Small cars are where the true luxury lies

Oh for a small, quiet car. That’s what our estimable editor-in-chief Steve Cropley craved the other week when he wondered why there isn’t a compact car offering genuine luxury; one that cossets yet isn’t impossible to park. A small car with such good noise suppression that you could appreciate the pauses on Radio 3.

I think this is a more common want than the car industry realises. It’s as if compactness is anathema to those who push expensive cars; they figure that if you want luxury, you will want it in a five-metre-long package. I’m not sure that’s the case.

I’ve met a bunch of readers who own sports or luxury cars who tell me that, ultimately, they spend more time driving their offspring’s Mini, their Volkswagen Golf R or, increasingly, something like a Toyota GR Yaris, because small cars are easier to rub along with. They reserve their supercars for special occasions; and when you see a big luxury saloon these days, I think there’s a stronger chance of a professional driver than the owner being behind the wheel.

Yet true luxury makes your life easier and more comfortable, and a car that you can manoeuvre and park easily does exactly that. Why shouldn’t you want that? Small cars make much more sense than big cars – if only they were, as Steve noted, as cocooning or silent.

How much quieter is a true luxury car than a small car? By quite a bit, over even regular examples, not just budget ones. I’ve scanned through the cabin noise figures from all of this year’s road tests to date, and while there’s more to noise suppression than just the decibel (dBA) level will tell you (because some frequencies are more distracting than others and there’s a world of it I don’t quite understand), our ‘noise at 70mph’ figure is a consistent benchmark.

At a motorway cruising speed, most cars have between 66dBA and 70dBA of cabin noise. The sample size of 2021’s tests isn’t huge, but electric cars are, on average, quieter than ICE cars – although only by a whisker, and they’re easily matched by quieter ICE cars. The Audi E-tron (66dBA), Volkswagen ID 3 (67dBA) and Toyota Mirai (66dBA) are muted, but so too are the Vauxhall Mokka (66dBA) and Kia Sorento (66dBA).

I think the size and aggressiveness of tyres, plus a rigid suspension or subframe to carry their noise, is a much bigger factor. The Peugeot 508 PSE’s 71dBA and BMW M4’s 73dBA are behind only the McLaren GT’s 74dBA (which has not only big tyres and a shouty engine but also a super-rigid carbonfibre monocoque). 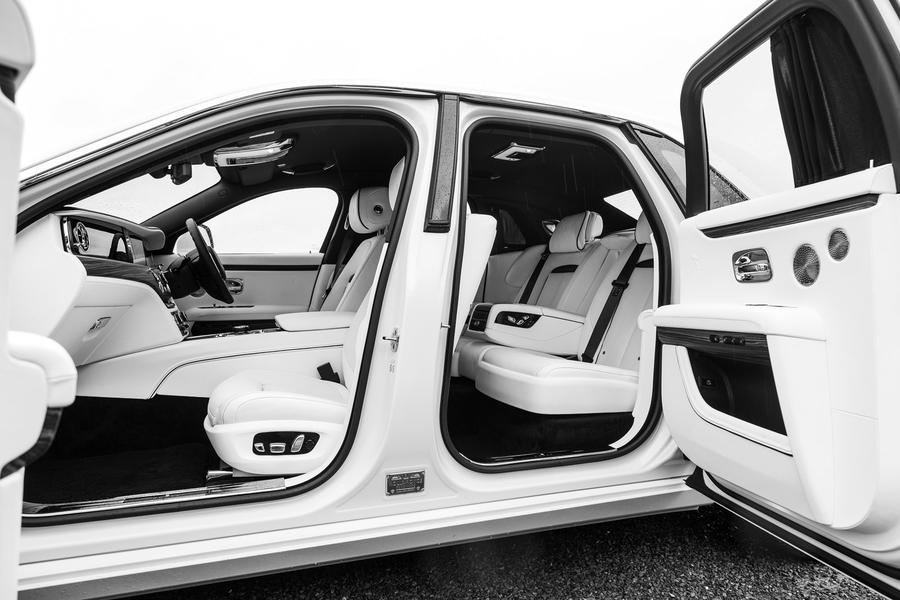 All of 2021’s cars, though, sit roughly in that sphere: nothing quieter than 66dBA, only a few over 70dBA. With one exception.

At 70mph, the Rolls-Royce Ghost has a cabin noise level of just 58dBA. And because the decibel scale is, as you probably know, logarithmic, the 10dBA difference between it and most other cars is actually quieter by, um, a complicatedly large amount.

What chance of approaching that level in something the size of a Mini? I know that it’s not as simple as just throwing sound-deadening mats into a little car; the £250,000 Ghost has been acoustically engineered throughout to make it as quiet as it is. But it wouldn’t hurt somebody to have a go. They might be surprised by how appealing it turns out to be.

Steve Cropley: Where are all the truly refined small cars?

The greatest small cars ever made

"Oh, for a quiet small car". Well said, that man. I do realise that it's easier to make a big car quiet, than it is a small car, but surely manufacturers could try harder. We have a Volvo V40 - excellent car, but why couldn't I have acoustic glass in it, as in the bigger Volvos? In my frequent long hauls across France (in pre-Covid days), I often thought that I'd like to waft along in RR-type silence. I can't, naturally, as I could perhaps afford a down-payment on the Spirit of Ecstacy, but something quieter would be good.

The original (W168) Mercedes A-Class, especially the facelifted version in LWB form (V168), was a packaging miracle, with as much legroom as an S-Class and a perfectly usable luggage compartment in a car shorter than a Fiesta or Punto (377cm in LWB guise). I loved it to bits. It was also, at the time, one of the few Diesel compact family cars with autobox. Perfect for the city, perfect for the holiday, perfect for the trip to Ikea. Shame about the poor reliability. What a great, great car. The fact that the longer and much more cramped current version, essentially another Golf or Focus or A3 clone, is greatly outselling it, is proof that "the Tardis car" is not a concept that the majority of buyers are drawn to, or at least not the majority of Mercedes buyers. The various Ix25, 500L, Venga, Note, Jazz, aren't exactly selling like hot cakes either.

There were quite a few attempts at making small, quiet and luxurious cars in the 60s and 70s - some such as the Vanden Plas versions of the BMC 1100/1300 already having been mentioned.  Another was the Triumph 1300 that my father and an uncle had.  I remember how quiet this little car seemed by the standards of its day even though its ancient engine was made to rev sky-high with its 15mph/1000 rpm gearing in top!  The seats were large and extremely comfortable and the interior a superb combination of olde-worlde wood and modernity, very much a Triumph signature of the period.  When my father serviced the car, partially dismantling bits of it, it became apparent that much more than usual attention had been paid to sound-proofing;  there were separate front and rear subframes and thick layers of what appeared to be state of the art sound deadening materials stuffed everywhere, rather than just thin layers of felt.