BACK TO ALL OPINION BLOGS
Currently reading: Why the 765LT Spider could be in a class of its own
UP NEXT
Remembering Clive Sinclair and the launch of the C5

Conventional wisdom says convertible supercars do not make good track-day tools, but since the 675LT Spider of 2016 McLaren has basically given two fingers to that idea.

The composite MonoCell tub used across the model range means the Spider derivatives get more or less the same degree of torsional stiffness as the coupés. And it’s this uncompromised stiffness, rather than the weight saved by not having to comprehensively strengthen the open-top structure, that makes a small but discernible positive difference when you’re wringing McLaren's Spider models out on track.

At 1388kg the 765LT Spider is 49kg heavier than the 765LT Coupé, which is an increase of around 3%. That sounds like very little, and it is very little, but even with their more steel-based architectures, alternatives from Lamborghini and Ferrari get close to achieving that. (The difference tends to be around 5%.) What those rivals cannot maintain is the stiffness of the coupés they’re based on, and even in 2021, you still notice it.

It’s why this 765LT is actually quite an exciting proposition, even though it would be very easy just to dismiss it as another ‘extra special’ supercar – one of which now seems to arrive every other day.

For a start, I’m not sure an alternative exists. If you want a senior supercar that is usable enough to be driven with ease on the road but is also razor-sharp on the track and can peel back its lid on demand, what are your options?

Unless Porsche introduces an open-top GT2 RS for the 992 generation and somehow makes it just as stiff as the coupé, I don’t see another car that can offer what the 765LT offers.

In terms of precision and involvement, you’re probably looking at something like the Dallara Stradale, but honestly, having to manually affix the canopy roof means the typical McLaren buyer is going to walk straight on by, and the Italian car’s four-cylinder Ford engine simply doesn’t have enough about it to make it an alternative to the 765LT’s waspish 4.0-litre V8. 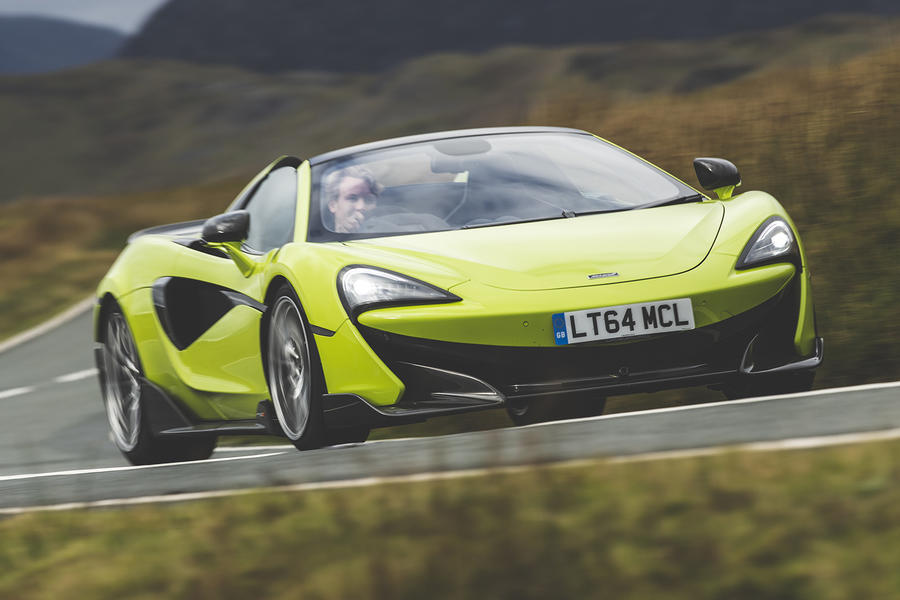 So this new McLaren is probably without a true rival, which is rare these days. And then there is the experience of driving an LT car – any LT car, be it 675LT or 600LT – on track, and with the roof down.

It’s an epic thing to do, simply because of how serious these McLarens feel on a fundamental level.

The low-set, surprisingly central and nicely reclined bucket seats, the positioning of the pedals (there’s no real offset, to allow you to left-foot brake) and the aggressively cutaway scuttle of that composite tub already make the 675LT Coupé feel very motorsport-y indeed.

For the Spider, all that, along with the sheer, violent speed of the thing and the awareness that there is nothing but clear sky above your head, is going to make owners feel like they’re at the wheel of an open-cockpit Le Mans prototype from the early 2000s.

At least, that’s how the 600LT Spider always makes me feel. With the rushing air, the sense of motion and the expansiveness of your driving environment – plus, of course, that supremely precise and feelsome McLaren steering – driving full pelt in one of these cars is an addictive and elemental thrill. Then you simply put the roof up and drive home.

As a triumph of function over form its exemplary, as for form?, it's not a looker, I'm only being honest.