BACK TO ALL OPINION BLOGS
Currently reading: Steve Cropley: No hyperbole is enough for the Porsche Taycan
UP NEXT
Matt Prior: the Huracan Sterrato is an exciting proposition

Steve Cropley: No hyperbole is enough for the Porsche Taycan

This week Cropley has nothing but praise for the Porsche Taycan and has his cockles warmed by Rolls-Royce.

The ever-present risk in this journalism racket is that you’re inclined to cry wolf. There’s a constant risk that you’ll over-praise stuff so that when something really jaw-dropping comes along – such as the £80,000 base-model, coil-suspension Porsche Taycan – you’re at a loss for ways to elevate it above everything else. That’s my position now. I’ve just spent five days in it and I really think it’s the best thing I’ve ever driven.

This four-door EV feels instantly like a Porsche. Not just a Porsche, actually, but the best of Porsches. It is almost affordable, yet its specialness and its quality are communicated in every turn of the steering wheel or touch of a switch. Or every time one of its wheels encounters a bitumen crater. Its seats perfectly suit even my odd frame. The alacrity of its cornering obliterates all concerns you might have about weight. The precision of its responses has repeatedly encouraged me to take the long way home – which is easy because, with the extra-capacity battery, it can do 300 miles on a charge. There must be reasons beyond general impecunity not to own this car, but right now I can’t think of one.

An amusing press release arrives from, of all places, the organisers of the Nürburgring Nordschleife, a place I’ve always identified with a deadly serious, time-attack driving style and not much frivolity. Seems the organisers are concerned about adrenaline-pumped drivers busting the 30mph speed limit on surrounding public roads once they’ve left the circuit.

However, instead of doing a lot of ineffective finger-wagging, they’ve pointed to the salutary case of mad-headed Walter Arnold, Europe’s first recorded ‘speeding motorist’, who in 1896 drove his horseless carriage through Paddock Wood (curiously close to today’s Brands Hatch) at a heady 8mph, four times the speed limit of the time. Obey the limit, say The ’Ring’s management, or risk the fate of Crazy Walter, who was chased by a policeman on a bicycle and fined a shilling. Back then, they tell us, it was a lot of money.

Even amid my Porker euphoria, I do feel rather sorry for reader Gerald Braid, who bought a 2020.5-spec Toyota RAV4 late last year, complete with the space-saver spare wheel, jack and wrench he decided he needed for safety on extended trips around the country. Initially, he was delighted when Toyota decided to deliver a 2021 edition instead, but pretty soon he discovered that the latest model doesn’t come with said spare and tools, and that he would have to fork out an extra £670 to get them.

Nobody told him this before the car arrived so you can see exactly why he’s feeling somewhat steamy. And it has hardly helped that the only remedy offered by his dealer has been to point out that in the UK people average only one puncture every 10 years. I mean, who says his decade won’t be up tomorrow? Toyota doesn’t usually make such lamentable gaffes with customer service; maybe it’ll correct this one. 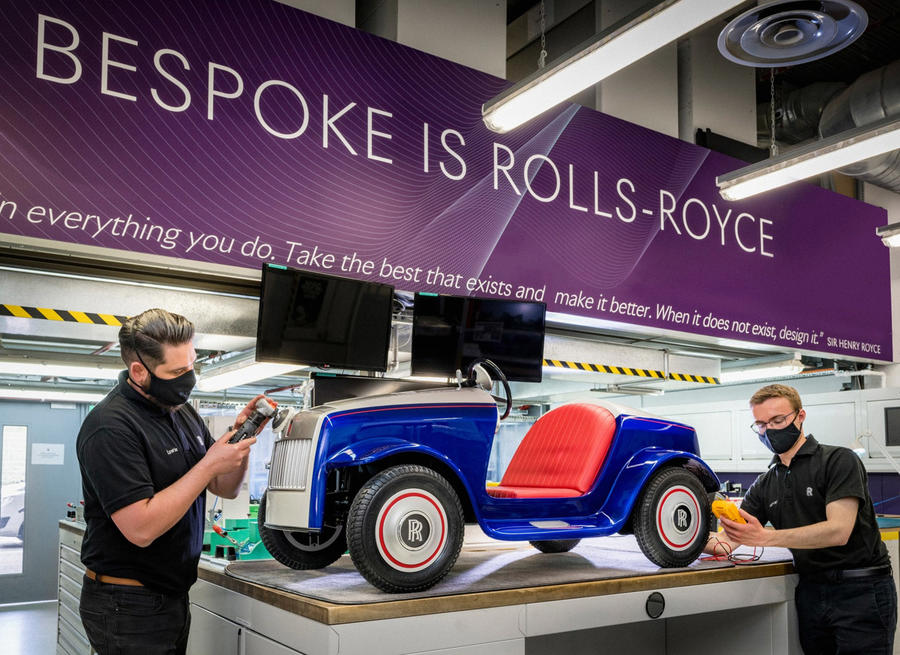 Prepare to have your heart warmed: Rolls-Royce Goodwood is currently refurbing a pedal-powered kids’ car it painstakingly built four years ago and presented to Sir Richard’s Hospital in Chichester so that anxious sick children could drive themselves to the operating theatre rather than having to endure the much scarier trolley experience. The car, beautifully painted and complete with its own RR radiator and Flying Lady, has consoled and delighted more than 2000 kids since its arrival but it was starting to show unseemly wear and tear. Rolls’ Bespoke team recently had the car back for what they’re calling a 100,000m service, working on it after hours. Now it’s back in service, as good as new.

Trust you’ve clocked our exciting project hatched with the National Motor Museum, Beaulieu, to identify – with your help – five future classics from today’s showrooms. Here’s my suggestion, possibly no surprise: Alpine A110.

Steve Cropley: Ford's Ranger Raptor is a barrel off road

Steve Cropley: My week in a Fiat 500e was electric

Your own magazine road test says the Taycan manages 257miles on a charge , not the 300 miles you glibly talk of. Other magazines have undertaken real world tests and achieved less than 150 miles, half of your quote , added to this with no Tesla rivalling charging infrastructure the Taycan is realistically only useful for local running . I've also heard several stories about the "Taycan creek", you might want to investigate that, as it would make a fascinating story ?

Ignoring for the moment the shamefulness of naming any EV a "turbo," I test-drove a Taycan Turbo. It was extremely impressive, certainly one of the most impressive cars I've ever driven. Beautifully made, extremey fast, handled superbly for something that size. And yet... it left me with no desire whatsoever to own one. None.

Now you have highlighted it, i would be amazed if Toyota didnt have a spare kit delivered gratis to Mr Braid, if they havent done already.

It would be nice if we saw a bit more from Autocar about the removal of this piece of safety equipment from so many new cars. If you needed one to get 5 stars in a Euro NCAP crash test pretty much every new car would get one!