BACK TO ALL OPINION BLOGS
Currently reading: Porsche 911 Turbo S vs 718 Boxster – which would you choose?
UP NEXT
Matt Prior: Why the M500 is a new hope for Noble

One is a 572bhp four-wheel drive monster, the other is a rear-wheel-drive convertible that's more than £100,000 cheaper
Open gallery
Close

You have a long weekend away planned, with lots of miles to cover. You're off to do a track day, and you have a choice of taking either a Porsche Turbo S or 718 Boxster.

Do you choose a shatteringly quick, all-wheel drive everyday supercar with a PDK automatic gearbox, or a mid-engined, rear-wheel-drive convertible with three pedals and a stick between the seats?

I’ve recently covered some serious miles in both while following Le Mans-winning driver Nick Tandy as he tackled two 24 hour endurance races in the space of a month.

First, I took the Turbo S to the Nürburgring and back. It is staggeringly capable. The acceleration is addictive (0-62mph in 2.9sec), it has a deliciously deep exhaust note, and it couldn’t have been more at home slamming along on the Autobahn.

Not to mention, and whisper it, at the risk of sounding boring, it’s surprisingly practical. I dragged our videographer James Holloway on the trip and the boot swallowed all our luggage and his equipment, with no sweat. Just don’t make any adults sit in the back for too long.

Yet, for all its brutal pace and ability, there’s something slightly detached about the driving experience. That’s not to say it isn’t utterly magnificent in most respects, but it’s almost too easy, in part due to its grippy all-wheel drive system.

A jaunt to Le Mans and back was enough to convince me that, regardless of how many cylinders the latest iteration has, it’s the one I’d grab the keys for again in a heartbeat. It's £100,000 cheaper, too.

Much has been written about its disappointing engine sound, but it has plenty of other things going for it, such as the wonderfully poised chassis and pleasingly rapid throttle response. It too didn't offer any practical shortcomings over the few days I spent with it: boot space was reasonable enough, and even after several hours behind the wheel I never got uncomfortable.

Tandy, for the record, drives a Cayenne company car, and owns a 911 GT3 RS.

He told me: "I’ve got the GT3 RS because I like driving it, but my daily is the Cayenne; it's perfect for airport runs and trips to the race track." 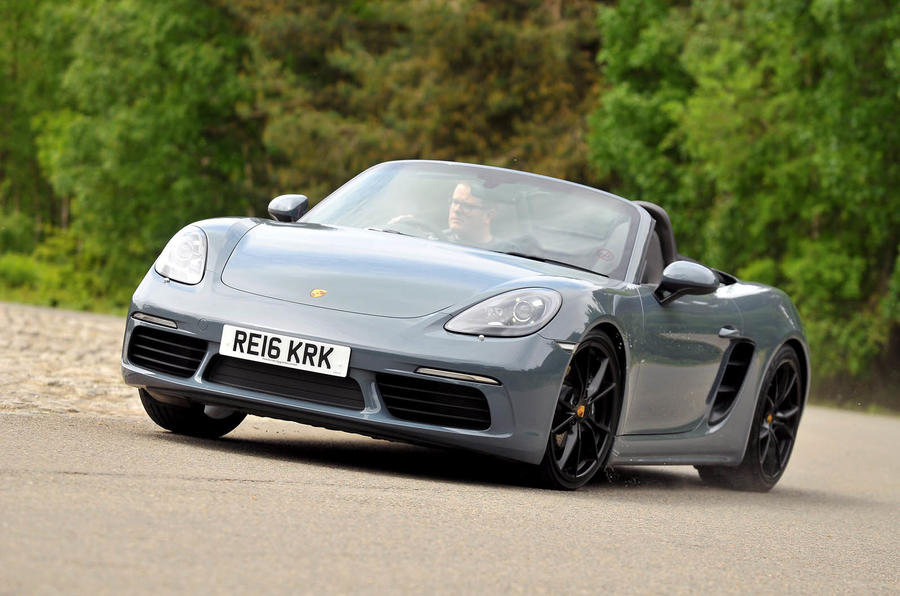 In this battle, it boils down to a case of lavish, out-and-out pace against pure driver enjoyment and, for me, the Boxster wins every time.

So, Autocar readers, what would you take? Let me know in the comments below.

I've had two 911's in my younger years, one 82 911 SC and one 92 964 C4, and I feel that the time is coming when a sportscar would (again) be fun to own. I have for some time had my eyes on a 981 Boxster GTS, but I am now contemplating a 991 Turbo Cab. Then we have the 718 Boxster. When I first saw it, I found it design-wise a very good looking piece of statement from Porsche - and actually better looking than the 981 Boxster. The reason being the new head lights, the more pronounced air intakes and the rear end (which I think is just superb). The only thing (again design-wise) that I do not thik is that nice is the front lower section with the air intakes and the way they have tried to make the front "wider". That looks just too "one-dimensional" to me. Then we have the engine........and this is where I loose interest. Even though there is a whole lot of good stuff to be said about the car (including the sound if you take into account it being a 4 cyl!!!), it still doesn't have the multi-frequency spinetingeling sound that is needed for me to feel connected to the car in a way that Porsches have done in the past. It is just too much IQ and too little EQ for me. maybe it will grow on me eventually, but this is just the thing: The 718 Boxster was probably never made for me (by Porsche). I am too old (last generation). Porsche is making the 718 Boxster for the upcoming generation - the "Millenials", to get them into the brand in a Life Cycle perspective, and also - to make sure that people like me go for the cash cow - the 911. I just think that Porsche also saw that the "wrong" buyers chose the 981 fleet instead of the cash cow - which for them meant lost revenue (ceteris paribus).
So - should I do what Porsche (really) wants me to do (given my 50+ years of age), and select the 911 Turbo, or should I listen to my inner self, and choose.........the answer is the same. The 911 Turbo it is. No matter what, it is simply the most capable, most practical, all year super sportscar money can buy period! There is NO equal match out there. Like one tester said; The only competition it has is coming from itself (in a newer version), and I fully agree.
Lessis More 26 July 2016

for what little it's worth...

...for fun I'd also choose Nicolas' MX5 over either of those Porsches. Older Porsches are much more real world fun than new. My wife had an MX5 for a few years & it was fantastic, we'd have another in a flash if we didn't have the kids...
NoPasaran 26 July 2016

AHA1 - what a sad tosser you are.
Obviously never watched a single video of TS, to say it is for fat cats with "issues". Why, because it is expensive? Cheaper than the rest of similar cars! And still the best.

I am in my 30s, I am not fat, I do love cats though, especially Russian Blue, anyway, I have a manual 997T, 570hp, and I have a 981 BoxsterS with PDK.
Turbo is too fast for the road and honestly even though I am fan of manual transmission now I believe Turbo should have PDK. It is a great long distance bullet and it is great in the mountains though you feel it has so much more to give you just scratch the surface. But I love this car, it is so relaxing to just cruise in it, and it's practical, I transported 3 girls in it ( my gf and her visiting friends) no problem.
Boxster is the more exciting car, undoubtedly, much less power and no turbos means one can use the engine in a much wider range of its abilities before it gets too fast. PDK is great but manual would be more exciting in that car, imho.
I test drove 718 on the hairpins, would never exchange my NA for a turbo-4, don't care if it is faster, 981 is fast enough and much more dramatic.

So, my choice between the 718 and TurboS - I take TurboS, it's a fantastic car in every respect. I wish I had the money...