BACK TO ALL OPINION BLOGS
Currently reading: How autonomous cars will affect the price of pizza
UP NEXT
Steve Cropley: Likeable Honda E can't get home on the range

How autonomous cars will affect the price of pizza

The arrival of fully self-driving cars on our roads in the not-all-that-distant future raises many big questions. Are they safe? How will they interact with human drivers? How many lives can they save? What happens with car insurance? Can they really cure congestion? Who will be liable in the case of an accident?

But here’s a slightly different autonomous car-related question that Ford’s senior management have been pondering: how much would you pay for a pizza delivered by a self-driving car?

This pizza poser grew from Ford’s partnership with Domino’s Pizza to trial autonomous deliveries in the American states of Michigan and Florida, using specially converted Fusions. It sounds like a gimmick, but Ford vice president Jim Farley insists it has been hugely informative.

Future car tech: the gadgetry that could change the car world

“Just think about people in apartment buildings,” he said. “There’s no driver to get the goods from the car to the customer, so what price do you have to discount [the pizza] for them to walk down and get it from an autonomous vehicle?” 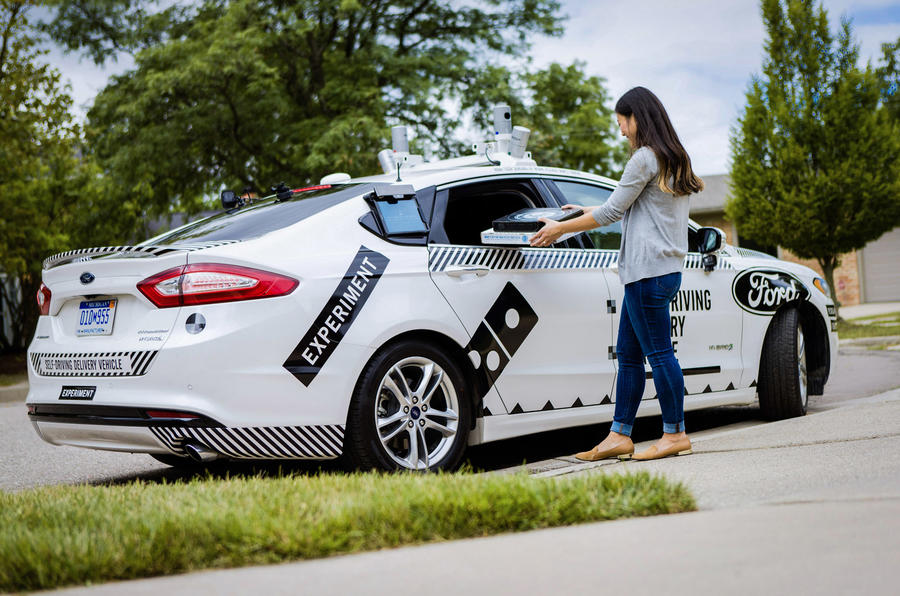 Even if you’re addicted to hot slices of cheese, tomato and pepperoni-slathered dough, this might not seem like the most pressing issue related to autonomy. But it is the sort of question that highlights the many ways driverless cars will impact society.

When it comes to food delivery, for example, the relationship between hungry customer and pizza purveyor is changed. An autonomous vehicle can’t get from the road to your door: you have to go and get the pizza from the car (customers are sent a four-digit code, which they type into a keypad on the car to unlock a storage compartment). 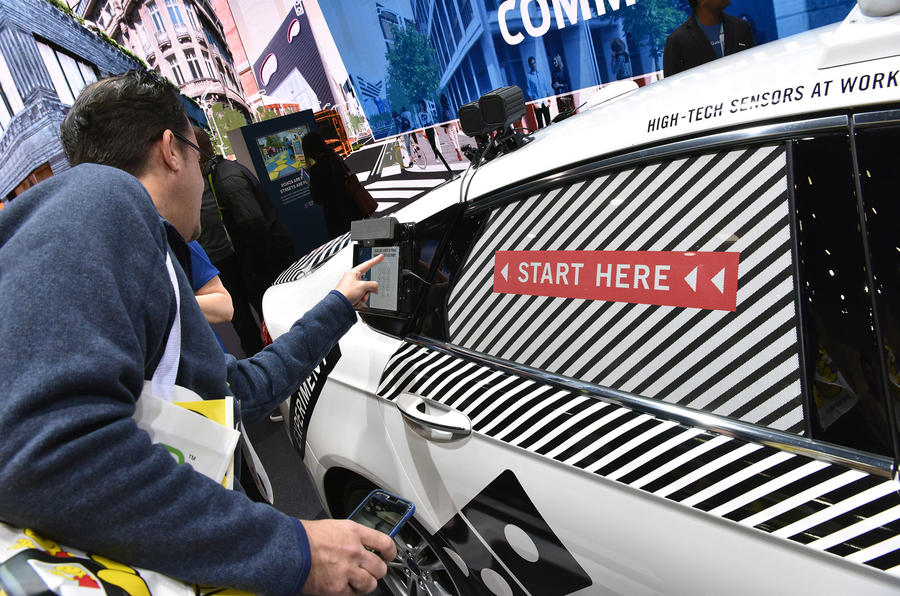 That’s extra inconvenience, especially if you live in an apartment or it’s cold and wet outside. So it stands to reason you should pay less for it, in the same way collecting a pizza from a takeaway is cheaper than having it delivered. But how much less?

More questions follow. Given they’ll presumably be programmed to obey traffic laws, where will self-driving cars park to make deliveries? And what will they do if they can’t find a space and your pizza is getting cold? What do you do if you check your pizza and discover the order is wrong? And how long – and I’m not joking about this – until autonomous delivery cars feature drones that can drop goods right on your doorstep?

Opinion: driverless cars - the race to save 500,000 lives (and fight for £5 trillion of business)

That’s just pizza delivery, too. The early uptake of autonomy is likely to come from commercial firms, given the potential for cost savings (since cars won’t need drivers). Ford is also conducting autonomous tests in the US with ride-sharing firm Lyft and Postmates, an ‘urban on-demand delivery’ company. And each of those tests will raise countless more questions. 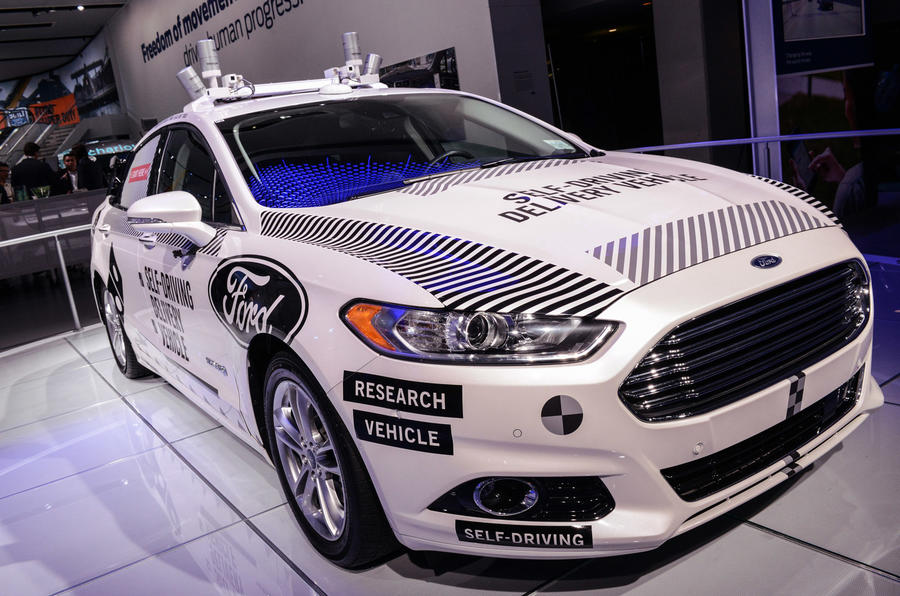 In isolation, those questions, on topics such as the price of a pizza, might not seem that significant – certainly compared to questions of, say, legal liability in the case of an accident.

But combined, such unknowns show the significant changes autonomous cars will have on society.

Enough big picture stuff, though. Let’s get back to the, erm, Mighty Meaty issue: how much of a discount would it take for you to collect a pizza from an autonomous car, rather than have it delivered to your door by a driver?

Future car tech: the gadgetry that could change the car world

Opinion: driverless cars - the race to save 500,000 lives (and fight for £5 trillion of business)

Opinion: why do people think autonomous cars are scary?

I alway collect my takeaways...

...I get to check the order for 'correctness' and that it's hot. I also get to drive, which for me is always a pleasure. I get that people might not do so in cities, but that's their problem for being a hipster snowflake idiot.

What is 'the prize of pizza'?

Ahem, it's a typo that

Ahem, it's a typo that slipped through, much to our embarrassment. Apologies, fixed now.

What has been shown is the first step to automation. A car liked that is oversized for pizza delivery. You just need an insulated box on electrified wheels. As for delivery to the door, drones are a stupid idea, just as they are for Amazon deliveries. A robot is safer, quieter, uses much less energy, and has fewer technical obstacles to overcome. It can just hop off the delivery vehicle and go to the front door.

These pizza delivery car is

These pizza delivery car is very silly. But automated vehicles to deliver goods are coming.

...since the (already expensive to buy/insure) autonomous delivery cars will have to be also self-defence capable. :-) (black belt confirmed japanese products recommended.)

No it’s more than rediculous, how many deliveries can it make on one journey?, could it deliver quicker than a person on am Electric Scooter?, food deliver like this is silly, it just wouldn’t pay, most who order in are just being lazy, ok, the informed would find it handy but the majority could go and pick it up, most are only a few blocks from the food outlet, in the UK most food outlets charge a £1.00 to cover delivery costs, if you can’t afford a quid, why are you buying expensive high Salt content food...?!

It is going to take a long

13 April 2018
It is going to take a long time before it is cheaper to invest many thousands on these than to employ a recent immigrant with a moped on minimum wage. Autonomous driving is quite frankly a farce, we already have mass transportation systems. Getting these right is the key to cutting congestion not having autonomous tailgating. That will help increase how many cars can use trunk roads and motorways at peak times but increasing train sizes would do more. As would a war to decrease the world's ever increasing population. But that's another rather more chilling issue than automated pizza delivery bots.

Have a bit of vision, there

Have a bit of vision, there is a big difference between achievements in advanced technology and impressive technological achievements. Phone technology will get inexorably cheaper and more advanced, however the great pyramid of Giza remains out of reach for normal people.

The car is a "minimum viable product", there is still a person sat in the driver's seat. In the US pizza's are mostly delivered by car at the moment.

The best way to look at technology is to look at first principles, how much energy, materials, time and people does the current system use and how much will the new one use.

Get rid of the person and the vehcile can become much lighter, if it's a road vehicle minimum size is likely to be to make it visable and sufficently robust that nobody will just pick it up and steal it. The cost of the navigation, gyros's and sensors are subject to Moor's laws as they achieve volumes so there is no reason to expect the autonomous pizza transport device to cost more than a piece of consumer electronics of equivilent size.

It is likely that some additional tweeking of legislation will be required to allow autonomous vehicles under a certain weight to not need to carry registration plates and to be allowed to move on pavements, this can't really be done until somebody builds one.

As for cost, if you are a small business who wants one person on minimum wage availible 18 hours a day, 365 days a year it will cost you in the region of £80k once support costs are factored in. An auotonomous system will be an order of magnitude cheaper.

In practice I expect that a substantial amount of small deliveries will be done by drone, this is a proven concept in remote areas and being demonstrated in large cities now. There a plenty of actors in this area with resources. Notably most of them use a winch with a breakaway function so that nobody even comes near the drone. For small payloads the drone can be a much cheaper and lighter machine than an autonomous car. You could have a system where by it drops the payload into a strong box which then closes the lid but without a delivery person involved there is no particular reason why the delivery would ever occur when you are not in.

This will happen and will iterate towards a solution which optimises for convenience and reductions in congestion.

As for automation, no current scheduled public transport is not the answer, it currently accounts for less than 15% of passenger miles, even if you trippled train ridership you wouldn't take more than a tiny chunk out of car ridership.

At least it won't expect a tip!