BACK TO ALL OPINION BLOGS
Currently reading: Could used be better than new for KTM’s freak four-wheeler?
UP NEXT
Matt Prior: Bring back the beach buggy

Could used be better than new for KTM’s freak four-wheeler?

The X-Bow has a certain appeal that can't be found in a GT Porsche, especially once someone else has taken the depreciation hit
Open gallery
Close

The KTM X-Bow has now been with us for more than a decade. That’s the blink of an eye compared with the longevity of the Lotus/Caterham Seven; and yet it’s also something of an achievement when you consider how fleetingly so many other cars of this ilk, and the firms that make them, can flutter in and out of existence.

You may seldom see one of these carbon-chassis, strangely insectoid sports cars - on the road, on a trackday, or anywhere else for that matter - but the X-Bow still exists. It remains in production. And there will soon be a five-cylinder version alongside the ‘four-banger’ we already know.

Since 2008, only around forty examples of the X-Bow (pronounced ‘crossbow’; a word which, presumably, the designers couldn’t quite fit onto the rear wing) have been sold in the UK. Our dealer network for the car has had as many as six outlets; it is now made up of only three. How many of those one-time dealers now wish they’d listened to warnings that the market for a trackday car with roughly the same power-to-weight ratio as a fairly quick Caterham, but costing twice as much, might be a bit limited? A few, probably. In one sense, though, it doesn’t matter; KTM’s intriguing four-wheeler project carries on regardless.

The X-Bow hasn’t changed much over the course of its life, which has given road testers like me little chance to get to know it as the years have passed. However, newly appointed UK dealer Darkside Developments has just acquired a five-year-old demonstrator, which they brought along to Donington Park earlier this week. And so how much more convincing an argument might you be able to make, I wondered, to own and use a second-hand X-Bow today than you could to buy a brand-new one that might have cost you anything upwards of £70,000 a decade ago? 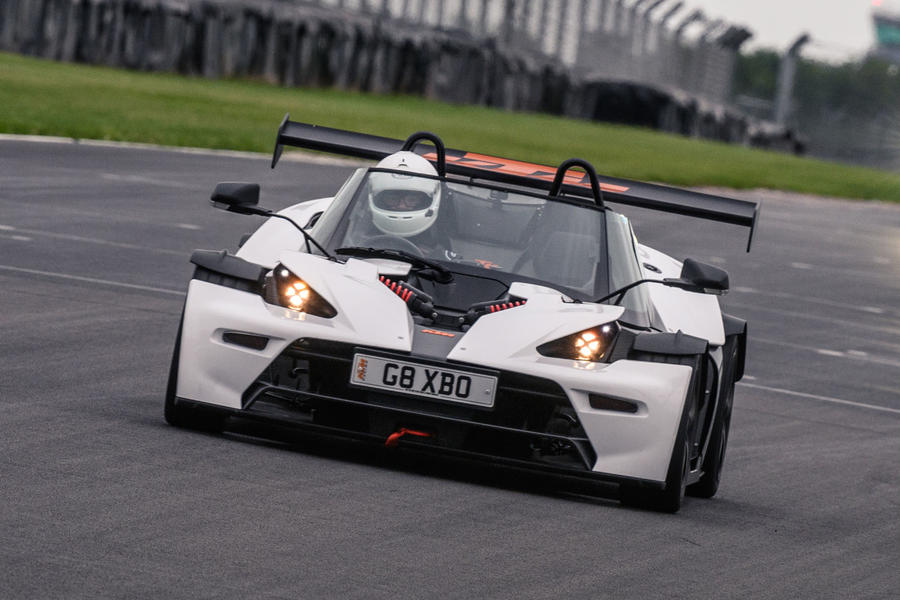 Alright; perhaps it wouldn’t be masses more convincing. It doesn’t help that, even now, the market’s cheapest used X-Bows somehow still cost more than £50k. Moreover though, the truth is that the appeal of this car remains one that is best described as ‘alternative’. ‘Particular’, even. Someone who’s managed to own or has driven a few trackday lightweights already without really falling for any of them, and who is looking for something different - and who likes their bikes as well - could easily take a shine to it. Someone who, for understandable reasons, might even be keen to wean himself off a fast bike and replace it with something a touch less crazed and more usable. I can see that. For that buyer, the car’s quirkiness is its selling point.

And that quirkiness takes flight the moment you lay eyes on the X-Bow, and only grows as you drive it. In one respect this is a less unconventional track car today, when so many of the rivals it had a decade ago - which weren’t turbocharged back then - have now been replaced by turbocharged replacements. But so much else about it still just seems odd.

For starters, you’ll wonder how a car that looks so small from without can seem so much larger when you’re driving it. The X-Bow feels surprisingly wide on a B-road, and even in a circuit pitlane. The width of the rear axle is hard to gauge, while the high cockpit sides can also make the front contact patches hard to see. It has a fixed seat, a sliding pedal box and a surprisingly large steering wheel that juts out close to your chest. I’d have wanted about three inches of extra legroom for good long-range comfort, though, and would have preferred a bit more room for elbow-twirling. If you’re a touch shorter-limbed than me, though, you’d probably be fine.

The X-Bow’s surprising sense of girth is a recurring theme of the driving experience. The suspension’s got three-way adjustable coilovers, but however you set them up the car doesn’t quite handle with the immediacy of an Atom or Seven. The chassis rolls and moves around underneath you more than you might expect. And even though the steering wheel’s so big, it takes plenty of working, being heavy under load as well as only medium-fast for pace. 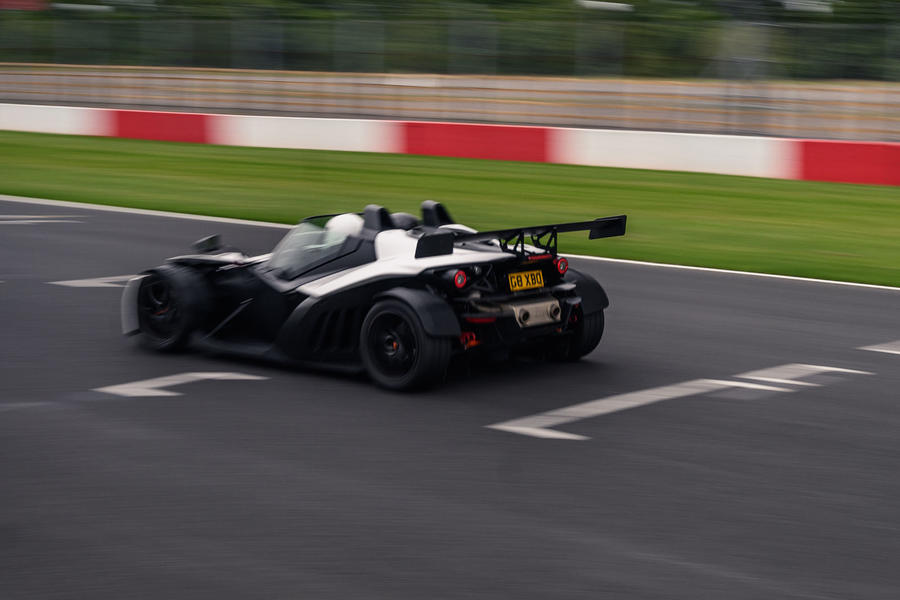 The X-Bow’s size and relative heft certainly gives it a greater sense of plantedness at speed than other lightweight track cars often have. The accessible torque of that engine allows it to keep accelerating at higher speeds and in higher gears in a way that Caterhams seldom can. If you want a lighter track car with a balance of agility and big-car handling security and grunt, those qualities might well impress.

The KTM’s handling isn’t rabidly direct like that of a fast Seven, and you can’t chuck it at an apex on a trailing throttle as if it were an Ariel Atom; but once you’ve learned to trust that initially soft-feeling chassis, you can carry big speeds in it. You can drive around the outside of supercars in it, once you’re feeling bold enough. Very little will keep you from the top of the timing boards on any given circuit day, if that’s a concern. Quite what one of these with upwards of 500 horsepower will be like, with a boost-swollen five-cylinder motor warbling away madly just inches from your head, is quite the prospect to contemplate.

But would I buy an X-Bow now, on the used market, when I’ve casually written it off so often these last ten years as an overpriced and slightly underdeveloped new car, admittedly only by the high standards of the very best trackday machines? Hmm.

£50,000 certainly doesn’t buy you much Porsche 911 GT3 RS these days, does it? But knowing what it would buy you from Ariel at the moment - however long the waiting list for an Atom 4 may have grown - I’d struggle to spend it anywhere else. Second chances may be a fine thing, but this one hasn’t turned me into a KTM convert. 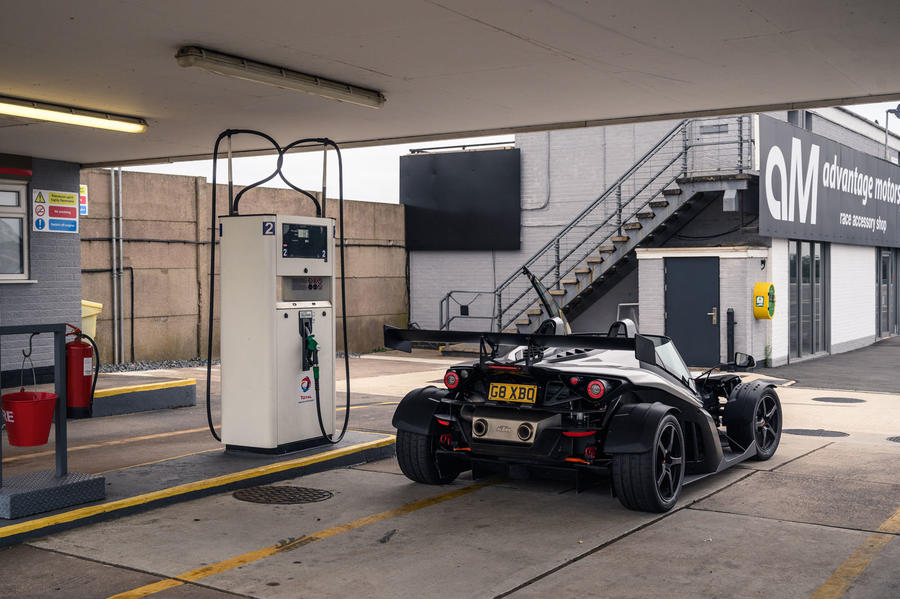 But maybe that’s just me. I think I prefer tubular steel to carbonfibre anyway; I’m not a bundle on motorbikes, and never have been; and I certainly don’t need weaning off one of the latter. Biscuits, yes - especially now. But bikes? Mercifully not.

With its screen and side

With its screen and side windows it looks a bit more useable than an atom but for a track day special does that matter? I'd guess not as if you wanted useable you'd buy a boxter or mx5 etc.