BACK TO ALL NEWS
Currently reading: New UK dealer appointed for KTM X-Bow
UP NEXT
Volkswagen ID Aero is EV Passat equivalent with 385-mile range

In a bid to rekindle the sales success of its now twelve-year-old road-legal trackday sports car, KTM is overhauling its UK dealer network for the KTM X-Bow.

Barnsley-based diesel tuning specialist Darkside Developments has been appointed the new majority dealer for the UK. It will be operating as KTM’s exclusive agent for X-Bow sales, servicing, repair and aftersales by the time of the arrival of the firm’s more powerful five-cylinder X-Bow GTX models in 2021.

Twin brothers Scott and Ryan Parkin, who own and run Darkside Developments, have realistic expectations of the franchise, which they will run alongside their other businesses. “KTM has had as many as six UK dealers operating in parallel over the last twelve years,” explains Scott, “but they have sold less than fifty cars between them.”

“We’re launching a new UK-specific website, and our aim is to sell between six and twelve cars a year. We’re hoping to meet some demand from owners who may have bought secondhand and who want to upgrade their cars, as well some as on the service and repair side.” The market’s cheapest secondhand X-Bows are currently available for around £50,000.

Introduced in 2008, the X-Bow was designed as a more modern, materially exotic and high-end take on the classic lightweight sports car concept. It combines a chassis made from carbonfibre composite with a 2.0-litre turbocharged Audi customer engine and, weighing just over 800kg dry in its lightest form, has peak power of up to 360bhp in stock form. It remains available today in ‘GT’, ‘R’ and ‘RR’ derivative forms, with UK prices on box-fresh cars starting at £100,800. Unlike other trackday options, it’s available with a choice of manual and paddleshift automatic gearboxes. 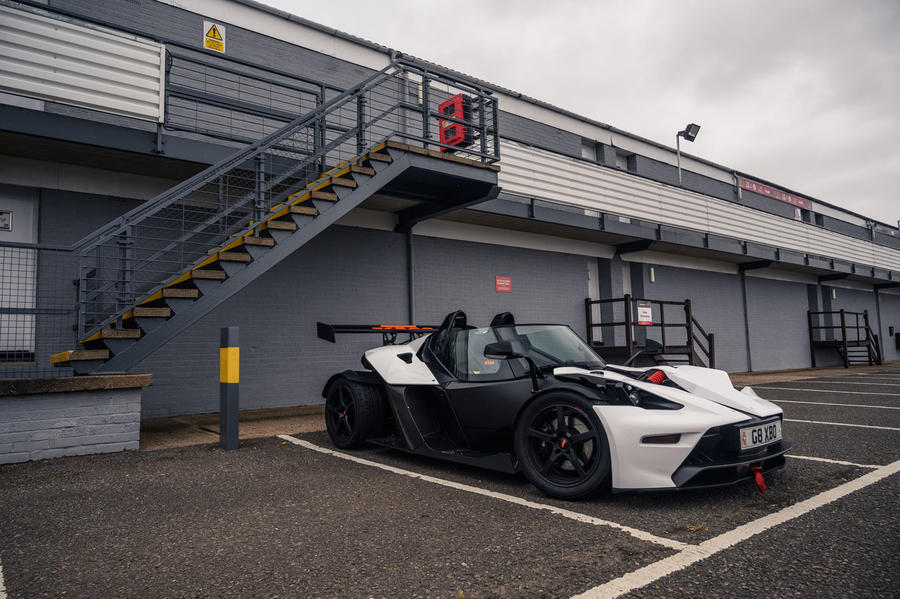 KTM will broaden the reach of the X-Bow range next year with the introduction of the X-Bow GTX, as well as with the related GT2 formula racer. Adopting the five-cylinder powertrain used by the Audi TT-RS but tuned to much higher outputs, those cars will take peak power output for the X-Bow up to as much as 600bhp.

“We’ll be selling the GTX-based cars in due course, and the X-Bow GT4 racing cars as well, and offering support for them from our premises in Barnsley, where we’ve got dyno facilities and plenty of workshop space,” Scott went on. Prices on KTM’s new-breed five-cylinder cars are set to start from £258,000.

“It’s early days, so we’ll wait for feedback from customers on whether they want us to store and ‘run’ their cars for them at track events, or to supply them for road use the old-fashioned way. X-Bows have been sold and supplied both ways over the years, so we’ll see what there is demand for.”

More pricing and specification information is available online through https://ktm-xbow.co.uk/​

What is it with KTM and Yorkshire based dealers? The last one was in Harrogate. I'm not sure that they ever sold many/any? The streets of Harrogate were not exactly full of them!

If they couldn't sell them in affluent Harrogate, then I think that they might struggle in not so affluent Barnsley!

Lord knows I've had enough of their off road bikes which really are top of the tree, but these cars are getting crazy expensive. Makes the Elise look practical too.