BACK TO ALL OPINION BLOGS
Currently reading: Racing lines: Not being competitive at the London to Brighton Veteran Car Run
UP NEXT
Matt Prior: Where have all the practical fast cars gone?

Racing lines: Not being competitive at the London to Brighton Veteran Car Run

Though not an official race, this tradition can sometimes feel like one - especially if you're driving with Irvine Laidlaw
Open gallery
Close

Does the London to Brighton Veteran Car Run really count as motorsport? It depends entirely on who you are riding with, as I discovered in 2014 when I joined ex-historics racer Irvine Laidlaw for the annual run, which takes place once more this Sunday.

Lord Laidlaw didn’t hang about (relatively speaking, of course) as we motored south from the start on Hyde Park’s Serpentine at 7.30am. His 15hp four-cylinder 1904 Panhard et Levassor didn’t miss a beat, and apart from the traditional breather at the George Hotel in Crawley, we didn’t stop until making it to Madeira Drive just before 11am on a crisp, autumnal morning. I hadn’t pushed anything and hadn’t even got wet. I felt like a bit of a fraud.

The run is supposedly non-competitive, but as we reached Brighton, I noticed Lord Laidlaw hunching a little lower over the steering wheel. How he cut past ‘moderns’ and jumped to the front of queues at traffic lights suggested the old racer’s instincts had kicked in. Turned out he was on for a PB. But no, it’s not competitive… 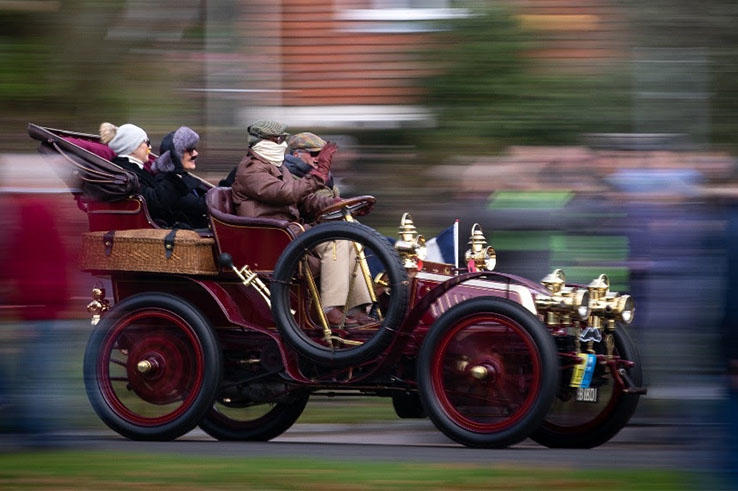 We’re blessed with many great motoring traditions in the UK, but none is older or more heart-warming than the LBVCR. It dates back to 1896 and what became known as the Emancipation Run, created to celebrate the lifting of strict laws on these new-fangled motor vehicles. The speed limit had risen from 4mph to 14mph and a man with a red flag was no longer required to walk in front of automobiles, heralding the dawn of the motoring age.

Revived by two newspapers in 1927, the run celebrates those pioneering days with an incredible 400 entries, dating from 1894 to the 1904 cut-off. The weather can put a dampner on the occasion, but on a bright and sunny November morning, it’s good for the soul to stand and wave as the veterans chug past. Although for most drivers and passengers, it’s not all fun. By the time we’d crossed Westminster Bridge and were trundling through Brixton, I’d counted 30 steaming casualties pulled up requiring TLC. Forget 11am: some don’t reach the seafront until late afternoon.

They need all the encouragement they can get. So make your way to a vantage point – perhaps Pease Pottage, Handcross or Staplefield (decent couple of pubs there), or the notorious Clayton Hill, where the veterans are reduced to a crawl – and give them a cheer. By the time I’d reached Brighton, my face was aching from smiling. It’s that kind of day.

. . .  on this event and I can confirm that it's the greatest fun, even for petrolheads.  If you ever get the chance, jump at it.

I'll be rooting on Sunday for Car no. 197.  A long unbroken record of finishing to keep clean.