BACK TO ALL OPINION BLOGS
Currently reading: If you're in search of cheap thrills, head for the hills
UP NEXT
Racing lines: Annie Wallace writes drag racing history at Santa Pod

If you're in search of cheap thrills, head for the hills

Motorsport is generally a pricey hobby, but not if you go hillclimbing
Share
Open gallery
Close
Share story

Many regard motorsport as hugely expensive and out of the reach of ordinary folk. That’s certainly true of the higher echelons, but it couldn’t be more wrong at grassroots level.

For those who want their motorsport to be about speed and the clock, hillclimbing can be as cheap and accessible as many weekend hobbies, and the standard car classes are perfect for newcomers.

Hillclimbing pits driver and car against the clock on a narrow ribbon of uphill asphalt. It’s intense and demands total concentration. The headline venues in this country include Prescott and Shelsley Walsh, yet access to events at these courses is firmly within reach of those of ordinary means.

The requirements for competing in the standard car classes are remarkably simple. The car needs to be post-2000, two-wheel drive and not turbocharged. There’s no requirement for a roll-cage and regular seats and seatbelts can be retained along with the rest of the interior trim.

You need a vertical timing strut at the front of the car, a sticker to show the location of the ignition on/off switch and a yellow earth strap on the battery. Standard tyres are mandated and the driver needs a helmet, overalls and gloves as well as a Motorsport UK competition licence. For a little over £500 – or a good set of golf clubs – you can be ready to race.

Mazda MX-5 driver Richard Davies is a case in point. “The sport is very accessible,” he says. “This is my seventh year. It was something I always wanted to do and it has been great. You can compete for a couple of grand a season.” 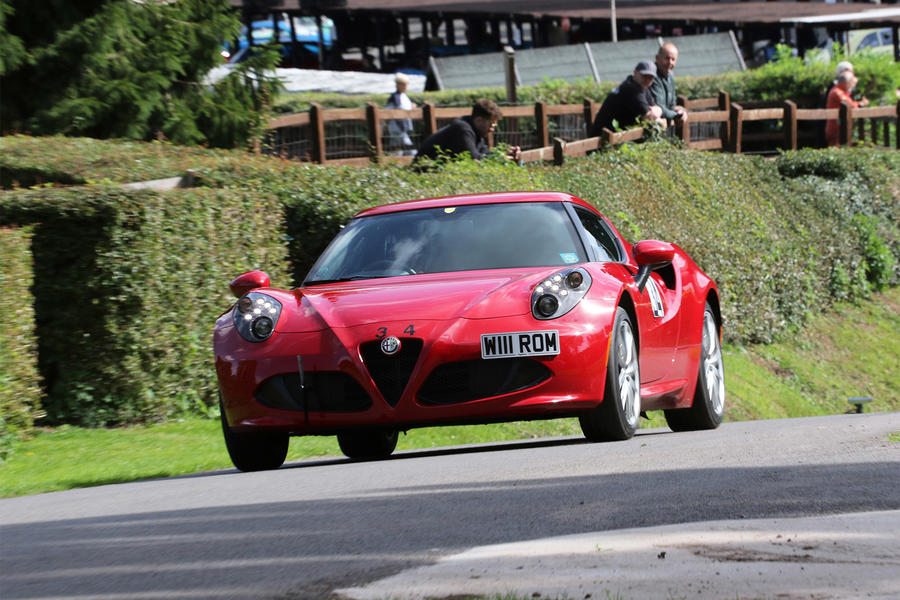 The Alfa Romeo 4C used by Will Gough is a more expensive car, but running costs for hillclimbing are miserly.

“It’s bog standard,” says Gough, “although it’s quite a wide car for somewhere like Shelsley! The timing strut fits on the towing eye. I drive to the events. The maximum budget for any event, including entry fees, is £200, usually less. Getting to an event costs a maximum of £20 in fuel. I have my car serviced by the local dealer, but it seldom needs a service as it does so few miles.”

If you thought your chance to compete at historic motorsport venues like Shelsley Walsh was out of the question for financial or technical reasons, think again. Running standard cars in hillclimbs is about the cheapest form of motorsport around, and it costs less than many other popular leisure activities.

I think Will is cheating

"The car needs to be post-2000, two-wheel drive and not turbocharged."

"The Alfa Romeo 4C used by Will Gough is a more expensive car, but running costs for hillclimbing are miserly."

The real barrier to this is the motorsport licence. It never makes sense to me what exact one is required, how much it is and what are the ongoing costs involved. Besides, it's a complete faff to get one.