BACK TO ALL OPINION BLOGS
Currently reading: Racing lines: a fresh Turkey nourishes Formula 1
UP NEXT
Matt Prior: Sometimes being a car journalist is a pain in the back

There’s a contradiction at the heart of the 2020 Formula 1 season that has made it one of the most memorable in years.

On the one hand, it has been entirely predictable, given the continuing level of dominance achieved by Mercedes-AMG, which has won 12 of the 14 races up to and including the Turkish Grand Prix, with the peerless Lewis Hamilton claiming 10 of them. On the other hand, few have been dull, thanks in part to the unique circumstances triggered by the global pandemic.

Good motorsport feeds off variables, from the weather to car and tyre performance to circuit characteristics. The more variables that can be thrown in, the more unpredictable the racing tends to be – and usually that leads to a better, more engaging spectacle. And in 2020, there have been a rash of significant variables to shake things up and somehow stop F1 going stale.

Despite Hamilton’s incredible record-breaking streak, only rarely has he been gifted an easy run: either his team-mate Valtteri Bottas has tested his resolve (although very clearly nowhere near often enough); Max Verstappen and his Red Bull-Honda team have worked some wonder to put up a fight; or the context of the refreshingly unfamiliar schedule of races at new or ‘old flame’ venues has thrown up the unexpected. And it’s that last factor that, for me, has been the tastiest ingredient to make F1 the captivating sport it always should be.

Turkey was no turkey

Istanbul Park was a case in point. Yes, it rained, but it was the new track surface completed just 10 days before the action started that really threw the teams and drivers. Turkey returned to the F1 calendar for the first time since 2011 only because of the emergency need to find European venues that could host races safely during a time of severe travel restrictions. Its comeback might well be a one-off, sadly, which makes the commitment to laying a new surface at short notice all the more impressive. But, as Silverstone boss Stuart Pringle could tell you after the headaches he experienced in 2018, laying a new track is pitted with complications, especially if it’s done in a rush.

Just like at Portimão in October, the Istanbul promoters’ fine intentions led to a surface so new that it was still oozing bitumen, plus it was almost too smooth, the close-grain construction presenting Pirelli’s tyres with a track that was like glass. The cars were akin to Bambi on ice during Friday practice, which perhaps was a variable too far. But it must be said that the surface did contribute to the most unpredictable weekend of the season, in which Racing Point’s Lance Stroll took pole position – with a lap 5.5sec faster than Hamilton’s! How the soon-to-be seven-time champion then overcame his own errors in the race and made the most of his W11 as its tyre performance came back to him led to the usual result but in the most unusual of circumstances – and highlighted once more just how special he is. This was genuinely great sport.

What can F1 learn?

The takeaway from Turkey, and indeed from this whole season, is that racing drivers and teams thrive on being challenged – and the humdrum schedule of races taking place at the usual tracks at the usual times of year, as is the plan for 2021, won’t do that to the same level as this season’s emergency calendar. If there’s a positive from the trials we’ve all faced this year, it’s that we’ve been forced to question everything we do and take for granted. In some aspects of life, nothing will be the same – but not always for the worse.

As we’ve said before, the deal to add Saudi Arabia to the calendar for next year shows F1 has every intention of reverting to type as quickly as it can. But perhaps it shouldn’t. Understandably from a business point of view, F1 loves the stability of longterm deals with key venues at set times of each season, but there’s clear evidence now that such conformity and predictability undermines the sporting spectacle.

The teams are being forced to invest in building new cars to fresh technical regulations for 2022, which may or may not level the playing field and improve the quality of racing. But surely a safer bet would be to add in more variables in terms of the tracks they use. Liberally sprinkling ‘guest races’ at Istanbul, Imola, Portimão or Mugello would go a long way to keeping a predictable season fresh, as in this strangest of years. Admittedly, with 22 or 23 already lined up, adding more probably isn’t the answer, and it would be complicated to unpick the business model that F1 has always adhered to. But that doesn’t mean it wouldn’t be the right thing to do. There’s an opportunity here to do what’s often hardest, which is to think differently – and invariably that tends to be for the best. 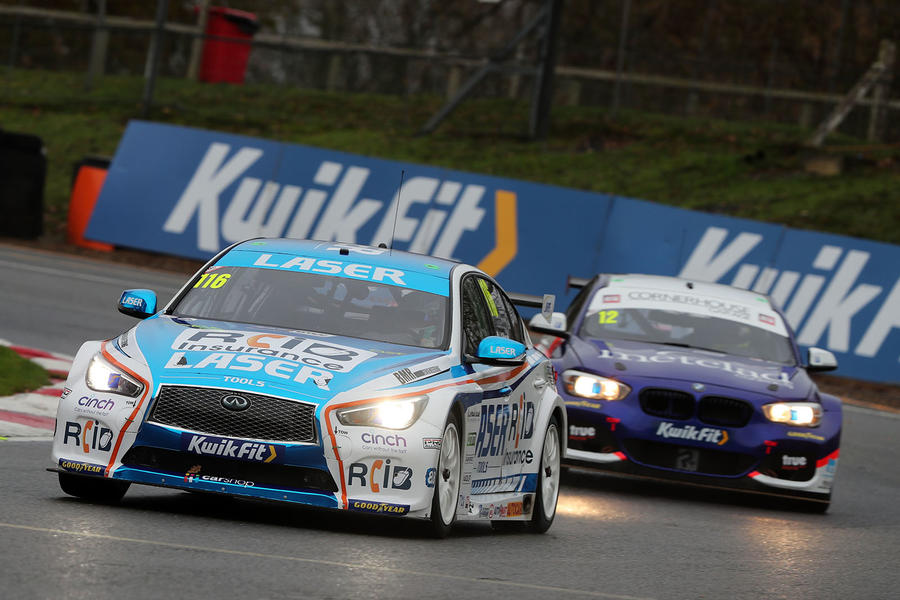 Something else that was unexpected was for the British Touring Car Championship finale to prove less predictable than an F1 grand prix. But Ash Sutton claimed his second BTCC crown on merit at Brands Hatch, as his Laser Tools Racing Infiniti Q50 proved more effective in changeable conditions than Colin Turkington’s benchmark BMW 3 Series. How refreshing to see a small independent team beat an established works-supported force on the back of simply strong engineering and accomplished race driving.

This success is also a testament to the way the BTCC is organised and run, and in a season that could so easily have never happened, how heartening that motorsport has provided such rich and much-welcome distraction. Sutton fully deserves the 2020 BTCC title, which was a triumph in more ways than one.

If you knew anything about F1 you would know that wet races are not going to assist with shaking things up as the best driver is always twice as good in the rain, either that or you get a flash in the pan winner occasionally. Schu, Senna, Hamilton, and most of the people that have won a championship because they are the the best with limited grip or best at sliding the car around which is obvious.  Michael schumacher was on slick tyres in an inferior car and still managed to hold off D.Hill in the Williams on wets Belgium 1995 IIRC. This season more than any recent season other has proved that the best driver will shine even more brighter in adversity.

What I would like to see, more races scheduled outside the driest time of year. Wet races always spice things up.