Red Bull-Honda has overtaken Ferrari in the F1 pecking order yet finds itself even further behind Mercedes. We ask how the pairing plans to get ahead
Open gallery
Close

Since he burst into Formula 1 as a precociously talented and preternaturally confident 17-year-old, Max Verstappen has been widely regarded as the future of the sport.

The Dutchman is now in his sixth full season of F1 and has started more than a century of grands prix (he has just passed father Jos’s tally of 106). He has scored nine hard-fought wins during that time, but there’s a sense that his talent deserved more. For one thing, while still only 22, Verstappen will, unless he pulls off a miracle and wins this year’s title, miss out on the chance to break Sebastian Vettel’s record as the youngest-ever F1 world champion.

Verstappen’s problem isn’t a lack of talent but a lack of opportunity: he’s driving a Red Bull-Honda in an era of dominance by Mercedes-AMG. And while Red Bull has established itself as the closest challenger to the German manufacturer in 2020, aided by Ferrari’s troubles, there remains a huge gulf in pace between the two.

Instead of battling for titles, Verstappen is left trailing in the wake of Lewis Hamilton and Valtteri Bottas, picking up scraps when circumstance allows. Even Verstappen's masterful victory in the 70th Anniversary Grand Prix at Silverstone owed as much to the vagaries of Pirelli tyres and Red Bull out-thinking Mercedes on strategy. And even accouting for such outlying results, Verstappen, Red Bull or Honda aren't wired to settle for anything less than matching Mercedes on pure pace.

Besides, Verstappen’s form relative to points leader Hamilton hasn’t sapped his self-belief. Asked what he and Red Bull-Honda need to beat Hamilton, he instantly responds: “You mean to beat Mercedes?”

The inference is clear: Verstappen is, in his mind, equal to any driver – even a six-time world champion. Okay, then, what do he and Red Bull need to beat Mercedes?

“What we need is pretty straightforward: we need a faster car and we need a bit more power,” he replies. “Unfortunately, it’s not that easy to get to that point, because Mercedes don’t stand still. They keep developing, and when you have such a big advantage, you can switch early in a season to the year after, so it’s always hard to catch up. We’re learning from the mistakes we’ve made in the last few months, and we’ll try to rectify that.” 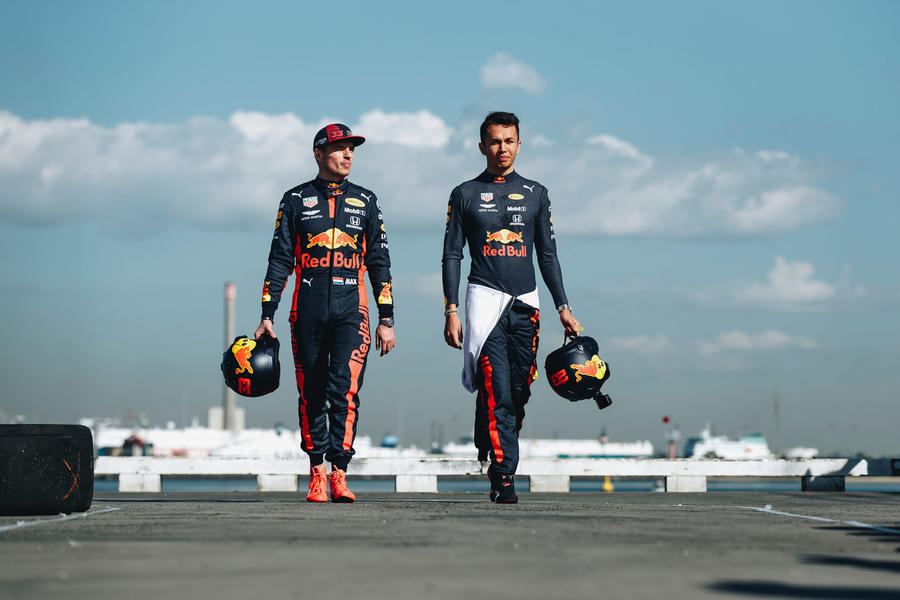 Red Bull knows what it’s like to dominate in F1. With Vettel driving, Adrian Newey designing and fizzy drinks money flowing, the Milton Keynes team won four consecutive drivers’ and constructors’ title doubles between 2010 and 2013. That run ended when F1 switched from 2.4-litre V8 engines to hugely complex 1.6-litre hybrid powertrains. This shifted the balance of power in performance terms from chassis to powertrain – and to manufacturer-operated teams that could design and engineer both elements in harmony.

Red Bull’s Renault power units were no match for those produced by Mercedes, and the team believing that its chassis was better than its results caused long-simmering tensions between it and the French manufacturer to become increasingly fractious and public.

With Renault buying back the Lotus team to run a full works effort in 2016, Red Bull spent three seasons using Renault power units with TAG Heuer branding. Verstappen’s hasty promotion from the second-tier Toro Rosso outfit early in 2016 – scoring a win in his first outing for Red Bull – was a boost, but it couldn’t make the squad an equal rival to Mercedes.

Still, Red Bull had a talented young driver in Verstappen and, it believed, as good a chassis as any team. Now it needed better engines. But from where? It found the answer in Honda, which in 2018 started supplying Toro Rosso after its own acrimonious break-up with McLaren.

The McLaren-Honda relationship collapsed after three years due to the Woking team’s frustrations with the Japanese powertrain’s shortage of power, and while Toro Rosso did bag some decent results in 2018, switching to Honda still seemed a major gamble by Red Bull.

But this decision has largely paid off: Verstappen took three wins, including Honda’s first in F1 since 2006, and Red Bull’s third place in the constructors’ championship put it well clear of Renault. But the team still wasn’t a match for Mercedes across the balance of the season.

The hope was that things would be closer in 2020 – but while Ferrari’s struggles have moved Red Bull up the order, the pace gap to Mercedes has, if anything, grown.

“As you’ve seen, the Mercedes is very fast,” says Toyoharu Tanabe, Honda’s F1 technical boss and something of a master of understatement. “The gap between the top teams is very big and has stayed that way. But both Red Bull and Honda are working very hard to improve our performance and catch up with them as soon as possible.”

Notably, despite the gap to Mercedes and the tensions in both Red Bull’s and Honda’s previous relationships, the alliance seems free of discord – perhaps because it’s clear that both the chassis and powertrain are lacking relative to the Mercedes.

Verstappen echoes that sentiment; in fact, he reckons the relationship “has only become better” this season. “When you first start working together, it’s always a bit of a question about how communication will be,” he says. “But from the very first test, it has worked really well – and it got better through the year.

“We introduced a few upgrades throughout last year, and by the end of the year we were looking very strong. It’s all working well together this year: we’re just trying to find more performance.”

Red Bull has been hindered by a balance issue with its chassis that has made it difficult to drive on the limit and led to a number of spins for Verstappen and his Anglo-Thai teammate, Alex Albon. That imbalance has particularly hampered the RB16 in qualifying, which has left both drivers having to battle through the order to salvage results on Sundays.

Albon says: “At the moment, we don’t really know what’s going on from qualifying to the race. The race car is obviously faster, but we need to unlock it more in qualifying.” Those qualifying struggles and balance issues have particularly hampered Albon, leaving him well down the grid in some events, thus opening him up to incidents in races, such as his clash with Haas’s Kevin Magnussen in the British Grand Prix.

Albon denies that he’s struggling, saying: “I’m not worried in the sense that I feel like it’s been tough or it’s going badly.” The team seems to agree: after Albon qualified 12th for the British GP, Red Bull chief engineer Paul Monaghan said “the challenge lies more with us than it does with Alex, to be brutally honest”. 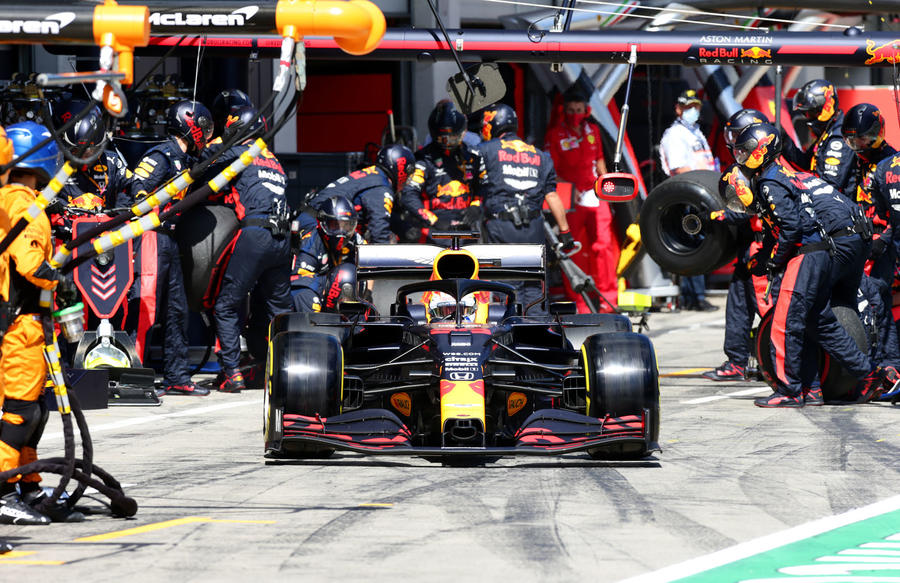 Red Bull team boss Christian Horner labelled the gap to Mercedes as “significant” but noted that his team rushed an upgrade package for the recent races at Silverstone, in part to solve the balance issue. He added: “Some of the philosophy at the front of the car changed over the winter, and it has given some anomalies that we need to understand.”

The problem for the Red Bull-Honda pairing is that opportunities to close the gap to Mercedes will be limited for the near future: as part of pandemic-induced cost-cutting, development of numerous parts has been frozen and teams must continue to use their 2020 cars next season. Essentially, it could be 2022, when a wide-ranging new rules package should reset the form books, when Red Bull and Honda truly have a hope of matching Mercedes.

That won’t stop them trying, but it’s why there’s increasing talk that, to get an F1 car worthy of his record-breaking talent, Verstappen needs to find his way out of Red Bull and into Mercedes. Hence the surprise earlier this year when he signed a contract extension to stay with the Austrian outfit until the end of 2023. So why? “I committed to the team because I believe in the team,” he explains. “At the moment, we’re behind Mercedes, but I’m also still very young. We’ll see. I’m not too worried about it.

“Of course I like to win, and of course I want to win championships. But at the moment, Lewis is at Mercedes as well, so you always have to consider your options. I’m happy where I am at the moment.”

Over at second chance saloon

Red Bull’s second-tier squad, rebranded from Toro Rosso to AlphaTauri this season, has long been used to develop new talent on the firm’s driver development scheme. But this year, it’s giving its two racers second chances. 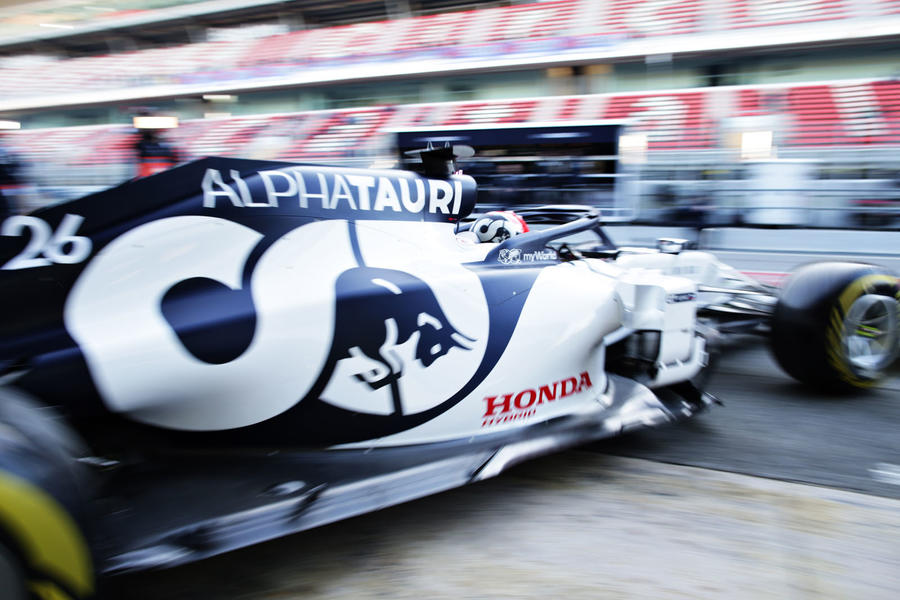 Both Daniil Kvyat and Pierre Gasly were promoted from Toro Rosso to the main Red Bull squad and then dumped mid-season (for Max Verstappen in 2016 and for Alex Albon in 2019 respectively), but both have earned themselves a reprieve from the notorious Red Bull young driver scrapheap.

“The period with Red Bull was quite particular and, for reasons that I know, that they know, it didn’t really work out,” says Gasly, who erased the disappointment of his mid-season demotion last year with a brilliant second-place finish for Toro Rosso in Brazil. “That was a fantastic moment,” he says.

Gasly says his goal now is simply “just to keep the momentum” and that he’s “not thinking too much” about Red Bull. He adds: “At some point, I want to be in a car that gives me the opportunity to fight for victories. At the moment, the target is to deliver the best result I can for AlphaTauri. Then we’ll see the opportunities that come up in the future.”

What he and redbull honda

What he and redbull honda need to beat Hamilton, no you mean Mercedes,

My answer to that would be, no I mean Hamilton, you've already got the measure of Bottas, you're second in the championship with only Hamilton ahead, so what do you and redbull honda need to beat Hamilton.

The title says redbull f1s battle plan, where in here is a battle plan? Aside the obvious of to keep improving the competitiveness of their package.

Well, there you are.

Looks like a happy hunting ground for Mercedes then?