BACK TO ALL OPINION BLOGS
Currently reading: Racing Lines: Why United is the team to watch at Le Mans
UP NEXT
Matt Prior: Where have all the practical fast cars gone?

Racing Lines: Why United is the team to watch at Le Mans

The test day takes place this Sunday, then it’s race week: practice on Wednesday, qualifying climaxes on Thursday night, final preparations and the traditional parade on Friday, then the race start, finally, at 3pm on Saturday 11 June. The experience is all-consuming.

“There’s no getting away from it: this is the race we all want to win,” says Oliver Jarvis, who with fellow Brit Alex Lynn and American Josh Pierson will bid for victory in the second-tier LMP2 class (and, with a fair wind, perhaps even an overall podium) in United Autosports’ Oreca-Gibson.

“I’ve written myself a few notes on what it takes to succeed at Le Mans,” says Lynn. “For me, the biggest part is keeping control of your emotions. Probably every driver is guilty of expending too much energy on something that isn’t necessary. You need maximum effort with maximum concentration to really be in the moment all the time during the race. That for me is key. It’s easy to be swept up in the event.”

For both Jarvis and Lynn, Le Mans arrives smack in the middle of a remarkable season. Adding an intriguing dynamic is that they are rivals in the US’s IMSA Sportscar Championship but teammates at United in the World Endurance Championship, which includes Le Mans.

Jarvis, 38, will be making his 11th start in the great race off the back of his biggest victory to date at the Daytona 24 Hours with Meyer Shank Racing; while Lynn, 28, has a second Sebring 12 Hours victory under his belt earned with Chip Ganassi Racing’s Cadillac and will be making his sixth start at Le Mans.

They share plenty of mutual respect and bonhomie, despite the strain of a rivalry in IMSA that has led them at times to share the same piece of track…

Both are grinning. “We seem to be attracted to each other at Turn 1!” says Jarvis. “This season, we had small contact at Laguna Seca and at Mid-Ohio at Turn 4 after the start, which was more on me. It’s inevitable, unfortunately, when you’re racing that close, and it’s part and parcel more in IMSA than it is in WEC.

“The important thing is we both keep it respectful and fair, and that makes it less awkward when we jump on a plane for a WEC race.”

“I’ve been told I’m not the nicest person to race against but a good person to race with!” says Lynn. “It’s weird to do both with Olly, but I’ve enjoyed it. Olly is a top driver, the kind you want with you and not against you.” 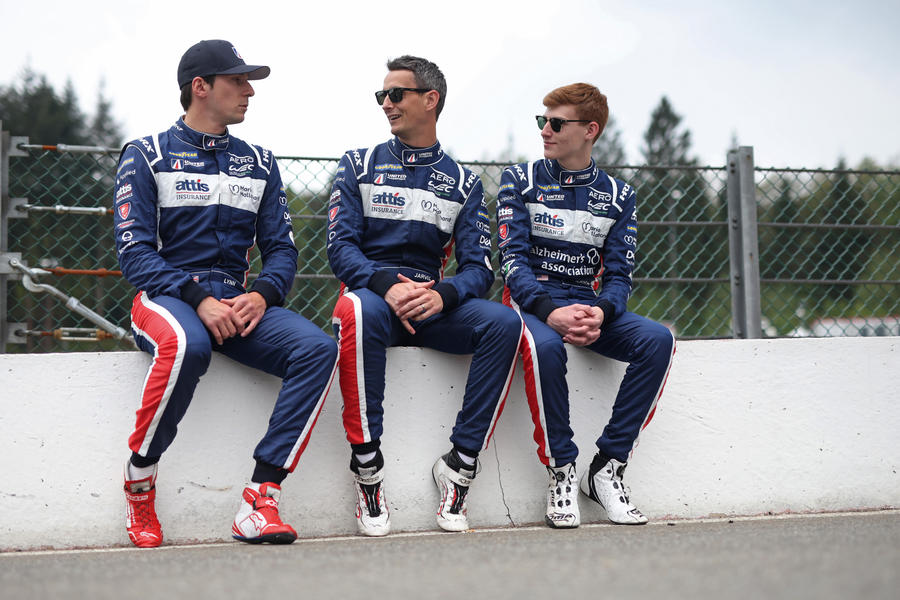 United travels to Le Mans pitching high in the most competitive field yet seen in LMP2. Toyota heads the top Hypercar class once again against the ‘grandfathered’ Alpine LMP1 and the pair of plucky Scuderia Cameron Glickenhaus entries.

Le Mans has come too soon for the stunning Peugeot 9X8, which will make its race debut at the Monza 6 Hours in July, so there is a sense of ‘seen it all before’ around the top category. Instead, LMP2 is where it’s at as a host of fantastic teams and drivers jostle for the step up to the LMDh cars that will transform international sports car racing next year.

Jarvis won LMP2 and finished second overall at Le Mans in 2017 and this year is already a WEC class winner for United, sharing with Pierson and Paul di Resta in the Sebring 1000 Miles.

Lynn took over from di Resta from the Spa 6 Hours, during which a driver’s door that wouldn’t shut at a pit stop cost the #23 car a likely class podium. Hardly a perfect dress rehearsal for the ‘big one’, then, but confidence remains high.

So who are their biggest rivals at Le Mans? “Every year for the past five or six years, we’ve been saying it’s the strongest LMP2 field ever, and that’s certainly true this year,” says Jarvis. “Jota looks good, then there’s Prema, which is new to LMP2. AF Corse will be quick in qualifying, but can they carry that over to race pace? But if I had to single out one, I would say the WRT car driven by René Rast, Robin Frijns and Sean Gelael. They will be tough to beat but certainly not impossible. Then there’s our sister, #22, which is very strong too.

“Your first focus is to win the race in LMP2, but there’s also huge potential to end up on the outright podium. It relies on reliability issues from the top runners and then you’re there.”

What especially marks out the #23 entry is the presence of Pierson, who at just 16 will become the youngest driver to ever start at Le Mans. Such a callow youth as the team’s silver-graded driver might sound like a disadvantage, if it wasn’t for just how impressive Pierson has been so far.

“I’m not sure Olly and I were quite that eloquent at 16,” says Lynn. “Nor as well behaved!” interjects Jarvis. “He’s a great lad,” says Lynn. “You wouldn’t know he’s 16 the way he conducts himself. Extremely professional, very receptive to feedback, eager to learn and listen, which counts for a lot at Le Mans. He’s learning at a rapid rate.”

The senior drivers gladly accept that they’re playing a mentoring role to a teenager, but there’s no suggestion that it will weaken their assault. Let’s see. Good preparation, cool heads and a dose of luck are required to win Le Mans.

“I would be lying if I said I wasn’t excited and dreaming of a good result,” says Lynn, a GTE Pro class winner in 2020. “There’s a lot to do first, but we’re in a good moment.”