BACK TO ALL OPINION BLOGS
Currently reading: Will an SUV finally give MG some traction?
UP NEXT
Could used be better than new for KTM’s freak four-wheeler?

Will an SUV finally give MG some traction?

The MG GS has launched in China and is due in the UK next year. Hilton Holloway asks whether this could be the car which restores MG to significance in the new car market.
Share
Close
Share story

If you work in the car industry, it must be tempting to think that building an SUV is a short cut to success. No surprise, really, that with SUVs booming in Europe and, now, in China, that MG’s third bodystyle is an SUV, shown in Shanghai this week.

You’d be unlucky to launch a compact SUV and not hit yearly sales in Western Europe of 130,000 or more. Even Peugeot’s 2008 – which is arguably not much more than a jacked-up, high-roof estate car – shifted 135,000 units in 2014. Peugeot had to increase production to keep pace with what must have been unexpected demand.

Move into the sector dominated by the Nissan Qashqai – where the new MG GS will compete – and the volumes are even bigger. According to the sales stats for Europe in 2014, the Nissan led the field, shifting 200,000 units ahead of the ageing VW Tiguan on 150,000 (and a massive 515,000 units worldwide).

However, unlike the booming market for compact SUVs, the midsize sector is much more competitive, even though it accounts for about a million sales per year. Nearly 30 nameplates are competing in this market, which has resulted in a ‘long tail’ of models running from Qashqai at the top (202k) and the Peugeot 4008 (just over 2500 sales) at the bottom. But there are healthy sales to be had. Kia’s Sportage is in third place (nearly 97,000) Hyundai’s ix35 forth (nearly 94,000).

So, the omens for the MG GS are good, surely? The European midsize SUV segment is growing strongly and buyers seem to be willing to try a wide range of brands. Even Ssangyong moved 4820 Korando models in 2014, but there’s evidence that the MG brand is no better known across mainland Europe than is its Korean cousin.

Shortly after BMW broke up the Rover Group I was told that the Germans had let the MG brand go for a good reason. While BMW had retained Riley and Triumph and leased the Rover brand to the Phoenix buyout team, it was happy to dispose of MG, because it was much less valuable than British automotive enthusiasts might imagine.

Apparently, BMW’s own research had revealed that MG had little recognition across Europe. And, although it was much better known in the US, Triumph was a more powerful brand across the Atlantic.

And, in retrospect, that makes sense. Triumph had a far wider model range in the US and even the TR7 outsold the MGB. Although the BMW research is pretty ancient now, there’s little evidence that MG is has any more visibility than it had in 2000.

A midsize SUV is exactly the right product for Europe in 2016. The trouble is that the MG badge remains an unknown quantity south of the English Channel. 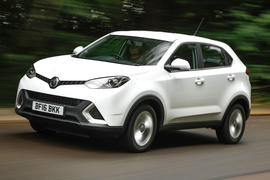 MG launches the third model of its Chinese-owned era: a family-sized 'soft-roader' crossover that faces increasingly tough competition, even at the affordable end of the segment

22 April 2015
The one flaw in this comparison of sales is that one must remember that, by the time the TR7 came out, the MGB was a teenager with rubber bumpers and a higher ride-height to make sure it A) complied with U.S. regulations and B) was as ungainly as possible. The one thing going for Triumph is that you could probably get away with charging a higher price for it.

Why bother with European sales?

22 April 2015
Given the low numbers so far achieved, you have to wonder if it is worthwhile for the company to be selling in this market. Maybe it's because European sales are part of MGs heritage, ensuring a better sales proposition in the far more important Chinese market. Without European (and more particularly British) sales, MG might be perceived as just another Chinese brand, lacking the credibility of the "real" European brands against which MG competes. Well, that's my theory anyway!

Is there a more abused brand

23 April 2015
Is there a more abused brand than MG? BL ransacked it decades ago, as did Phoenix. Somebody please tell the Chinese that the MG Metro was not really an MG and they should stop using it as their template. But if they've got the wrong idea about the brand it's because we set such a bad example.

Riley and Triumph under BMW ownership- not a single new models!

23 April 2015
So BMW owns the Riley and Triumph brands since the 90s, and not single new model eversince. What a waste of time & opportunities..

23 April 2015
We don't really need psuedo-MGs from China, anymore than the cheap knock-off copies, of European cars, they are building.

When MG were flush with cash

23 April 2015
When MG were flush with cash they didn't have and were machine-gunning us with Le Mans cars, ridiculous headlining grabbing xPower SVs and a V8 Rover 75 there still weren't enough people interested.

Fair play to the Chinese for trying to do it right by keeping some semblance of a presence at Longbridge but the link with the past has long since been broken and flogging anonymous family cars with a sports car badge the car buying public doesn't remember is not a great recipe.

Well firstly, this is not a

24 April 2015
Well firstly, this is not a nice SUV. The theme itself is ok, but the car looks narrow and has awkward proportions. However, no doubt it will be the best selling "MG" cos of the type of vehicle it is.

Secondly, That BMW "research" sure is outdated. Don't they even remember that the MG F and TF was the ebst selling roadster in the UK until it's death. There is value in the MG name but with the right cars! That means roadsters and coupes and sporty cars. The current crop of Chinese MG's are anythign but this. The 3 is probably the pic, but it looked dated at launch and none of these things look or feel British or MG.

I always though Porsche should have bought MG and dominated the lower range of the sportscar market with it. oh well.

25 April 2015
Given that the Chinese owners seem to have completely ignored the MG heritage (from way back, not the bad old BL days) then it would seem that they might as well go the whole hog and forget about it and just go with what might sell, and no-one can deny that small SUVs are the "in" thing at the moment, so they might as well give it a crack along with anything else that sells. The MG name means as much now as any other pair of letters - BO, HI, FO etc etc .... whatever you like.

Investment brings its own rewards

1 May 2015
SAIC need to realise that they need to put similar amounts of investment into a UK production facility as Geely have with Volvo in Sweden/Belgium. Whilst they continue to screw on the wheels and drop in the engines on fully built up Chinese models, they won't make any significant advance in European markets.