BACK TO ALL OPINION BLOGS
Currently reading: Why Volkswagen doesn't sell the Amarok in the US
UP NEXT
Opinion: the 997 GT3 RS is the best Porsche to wear a GT3 badge... so far

Why Volkswagen doesn't sell the Amarok in the US

Volkswagen has a pick-up, the Amarok, and the US has an enormous pick-up market. Yet, oddly, the two don’t marry - VW doesn’t sell the Amarok there.

Why? Two reasons. First, the Amarok isn't homologated for the US - and apparently can’t be without extensive re-engineering. Second, it's too expensive for the US market. That’s due in part to the so-called chicken tax - a 25% tariff on potato starch, brandy and, importantly, light trucks imposed in 1963 by the US in response to tariffs placed by France and West Germany on US chicken imports.

All this means that, rather than address these issues on an existing model, VW is tabling an all-new pick-up based on its Atlas large SUV and built in the US.

Currently only a concept, the Atlas Tanoak is a very credible future production model.

Making a US pick-up to sit alongside a predominantly European pick-up, the Amarok, is a reminder that not all cars work globally.

Despite the chicken tax and other challenges, it remains remarkable that making a new pick-up is more efficient than adapting an existing one. 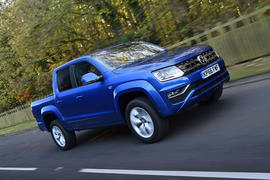 I'm surprised that VW haven't engineered the Amarok for the US market,would it be affected by the "Chicken Tax" as it's built in Argentina? Maybe price might not be a problem if it was pitched up against some of the high end pickup trucks that are on sale already in the US.

Because it's A. Ugly and B. Diesel

I guess beauty is in the eye of the beholder.

But no-one can deny that there are 300,000 VW diesels sitting in the desert in California, and other locations, because no-one wants them. Not even VW.

So there’s no point in sending more dead technology over there.

so from next year we could make them all!