BACK TO ALL NEWS
Currently reading: Volkswagen shows Atlas Tanoak pick-up concept
UP NEXT
Lamborghini confirms LMDh entry for 2024

Volkswagen has previewed its plans for a US-built pick-up with the unveiling of the Atlas Tanoak at the 2018 New York motor show.

Conceived around the company’s unibody MQB (Modularen Querbau) platform - as used by a wide range of VW models ranging from the compact Polo hatchback to the Atlas SUV – the dual-cab concept hints at how the German car maker intends to muscle its way into the lucrative North American full-sized pick-up market against competition that includes the ubiquitous Ford F-150.

Combining a contemporary design lineage reminiscent of more recent VW SUV models with traditional pick-up proportions, the 280bhp 3.6-litre V6-powered Tanoak has been conceived as part of an eventual three-model Atlas line-up that includes the seven-seat Atlas SUV and five-seat Atlas Cross Sport - the latter of which also made its debut at the New York motor show.

The Tanoak remains a concept for now. A spokesperson told Autocar: "The mid-size pick up segment [in the US] is interesting but not a no-brainer. It is below 500,000 sales a year - down from a million but stabilising and growing again now - and this really is a concept that is being evaluated. It hangs in the balance if we'll make it, and it will depend on reaction at the show, in clinics and ongoing. The logic is there, but the business case has to fit, and until we get the feedback we can't commit." 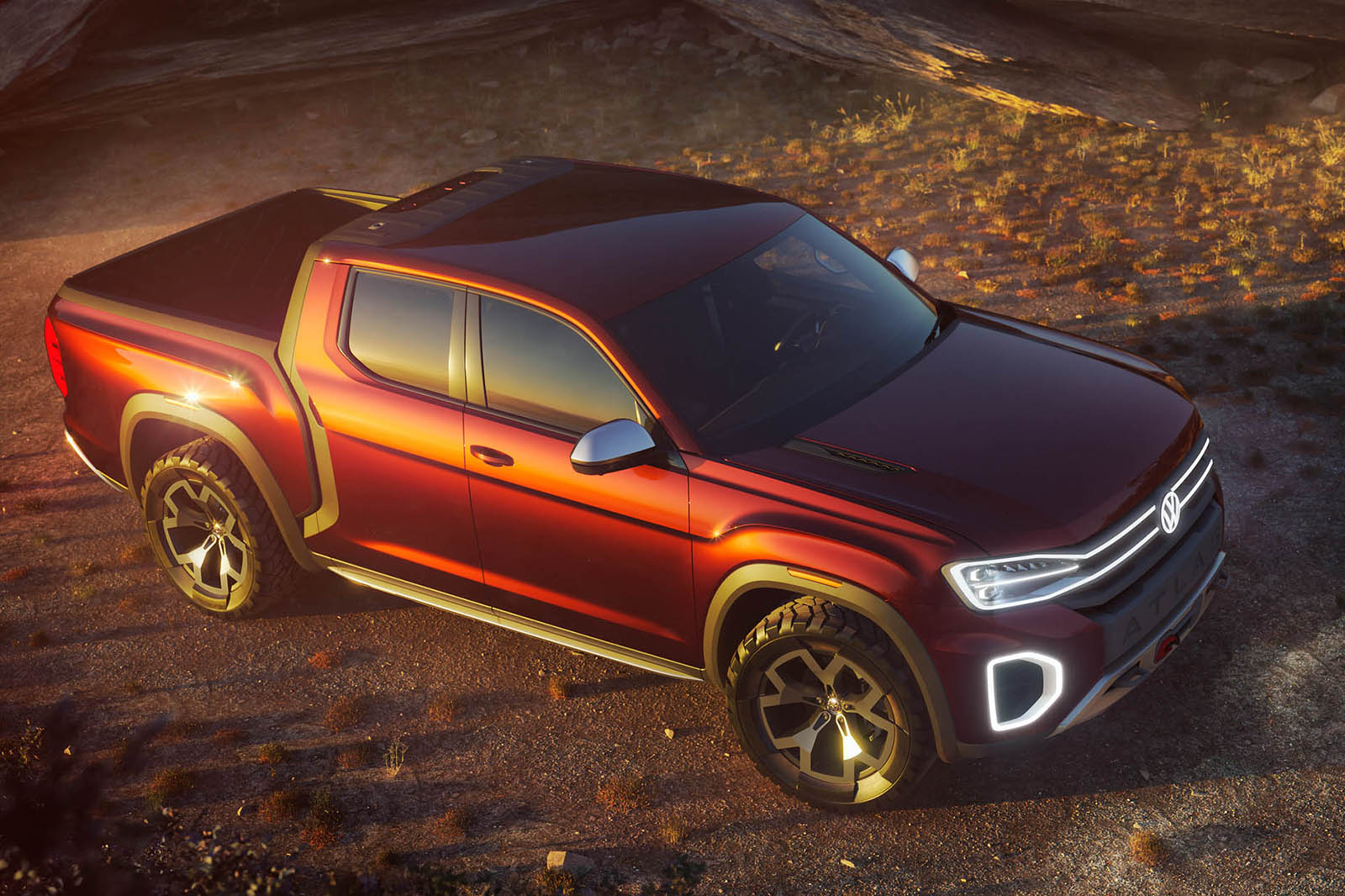 Unlike the Atlas Cross Sport concept, which has already been confirmed for production in 2019, the Tanoak is described as being more conceptual in nature. Its brief, says VW design boss Klaus Bischoff, is to test public reaction to a full-sized pick-up model for the North American market that he says could be produced at the company’s Chattanooga plant in Tennessee.

“We’re not saying this is a model we will definitely bring to showrooms. Rather, we’re airing our ideas of how a future Volkswagen pick-up could look like. In the US, you need to be in the truck market to generate proper volume. With a positive reaction from potential customers, the Tanoak could take us there,” says Bischoff.

While VW admits the Ford F-150 and Chevrolet Silverado are among the competition being targeted by the new model, it says the Honda Ridgeline and upcoming production version of the Hyundai Santa Cruz pick-up concept are more obvious rivals for the Tanoak, which has been seen as less of a tradesman’s workhorse and more of a lifestyle-oriented model. 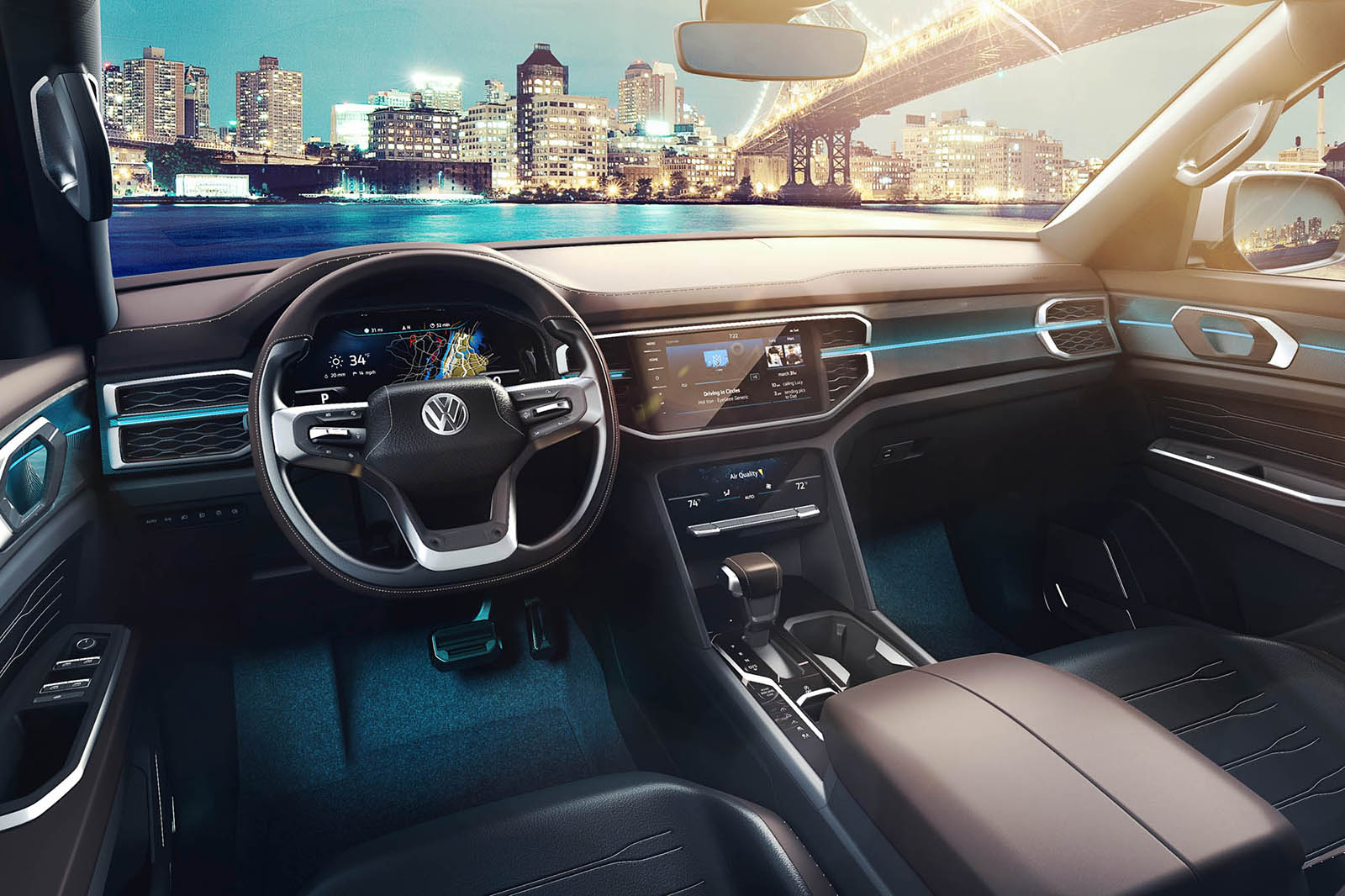 The decision to develop the Tanoak as an addition to VW’s Atlas line-up follows internal studies that deemed the Amarok – a ladder frame chassis-based pick-up produced by the commercial vehicle division – unsuitable for sale in North America due to its high production cost, compact dimensions compared with the full-sized pick-ups popular in the US and a lack of a suitable production base in the region.

The front end of the Tanoak takes its styling inspiration from the Atlas. However, the concept departs quite radically from its SUV sibling towards the rear.

Key design elements include a technical-looking front bumper featuring a metal kickplate and winch within its lower section, as well as outer air ducts surrounded by distinctive LED day time running lights. In a hint that an eventual production version of the pick-up could take the same name, it is also adorned with the word 'Atlas' within a contrasting black middle section. 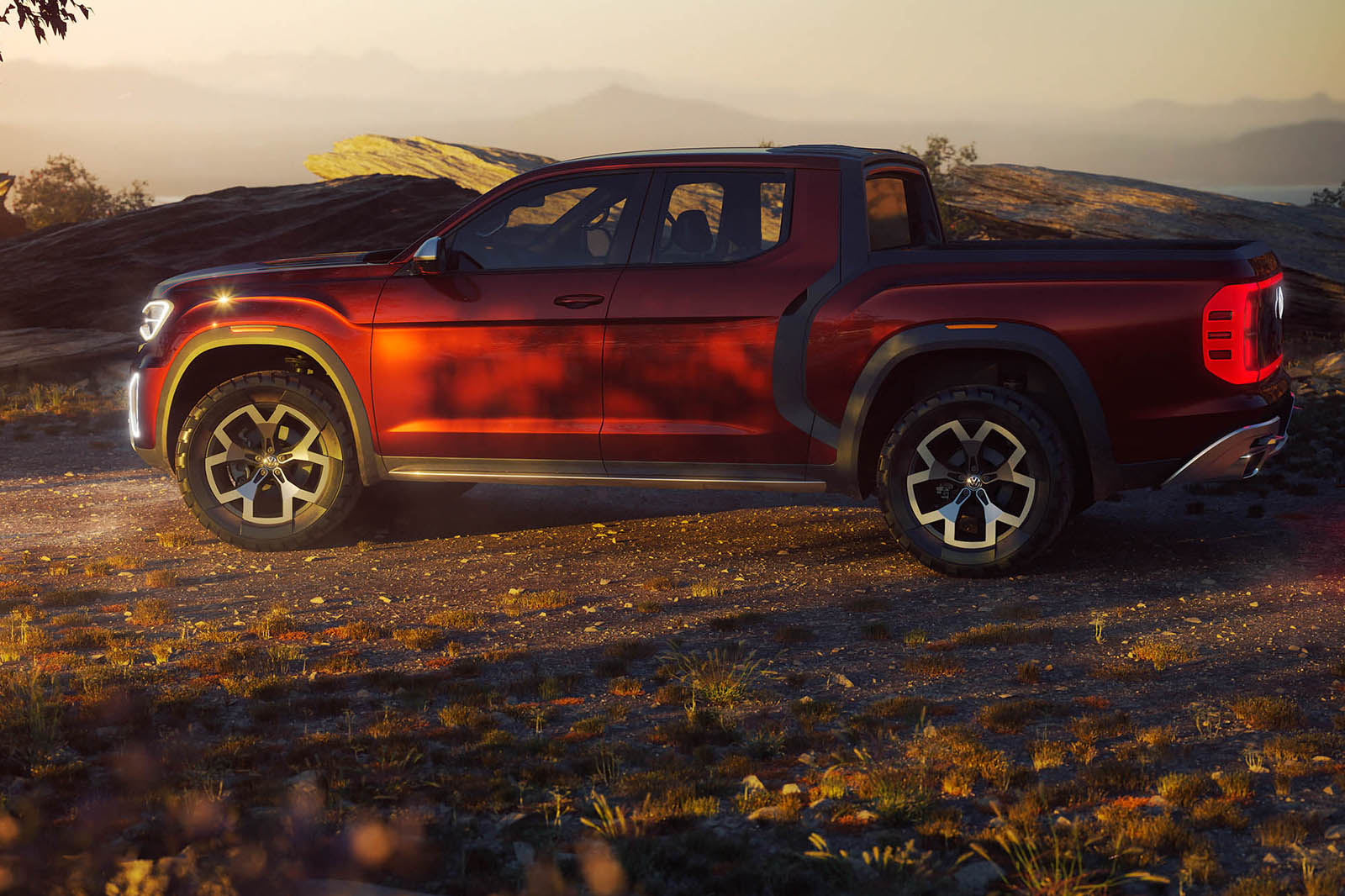 The Tanoak also receives a newly designed grille with integrated headlights that wrap around the front fenders with a greater tapering effect than those seen on the existing Atlas SUV. It is highlighted on the concept by a series of LED light bands and an illuminated VW badge that, in combination with a similar styling effect at the rear, light up when the concept is locked or unlocked.

Further back, the wheel arches have been beefed up with additional cladding and are filled with multi-spoke 20in wheels shod with 275/55 profile tyres. However, the characteristic side feature lines, which extend over the top of the front wheel arches and down the middle of the doors, are retained.

It is frp, the B-pillars where the Tanaok gains its own visual character, with short rear doors that are not immediately recognisable due to the door handles being integrated within the cladding at the base of the C-pillar. There are also contrasting sills aimed at creating the effect of greater cabin length. 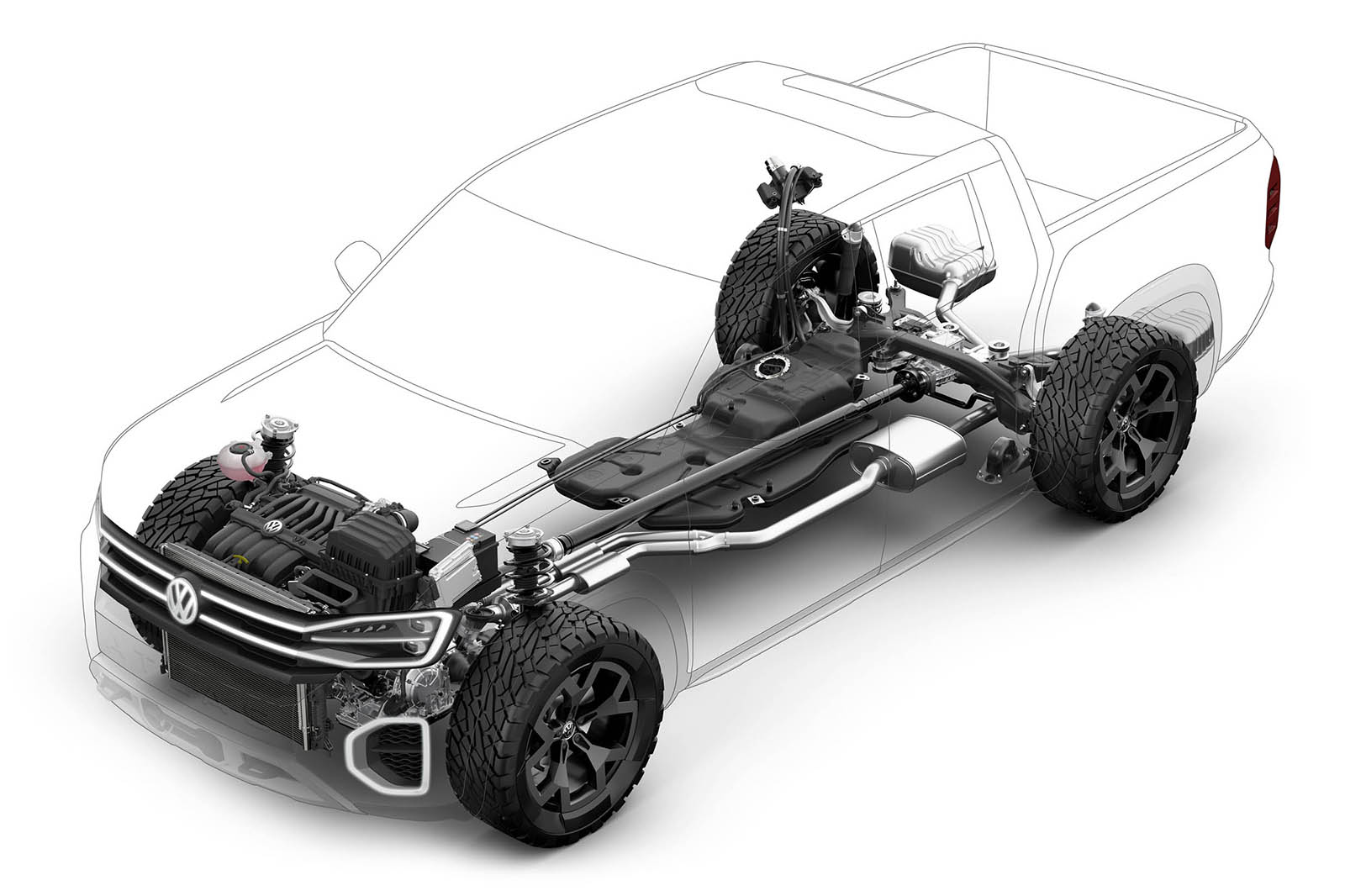 Towards the rear, the cargo box sides receive large rear wheel houses and side feature lines mimicking those up front.

The exaggerated height of the concept has been achieved, in part, through a 45mm increase in ground clearance over the Atlas SUV, leading to a bold stance that aims to appeal to typical North American pick-up drivers - a customer group the German car maker says it hopes to target with a possible production version of the new five-seater.

As a point of reference, the Ford F-150 SuperCrew, a dual-cab version of North America’s best-selling pick-up, stretches to 5890mm in length, 2029mm in width and, with maximum ground clearance, a height of 1953mm. 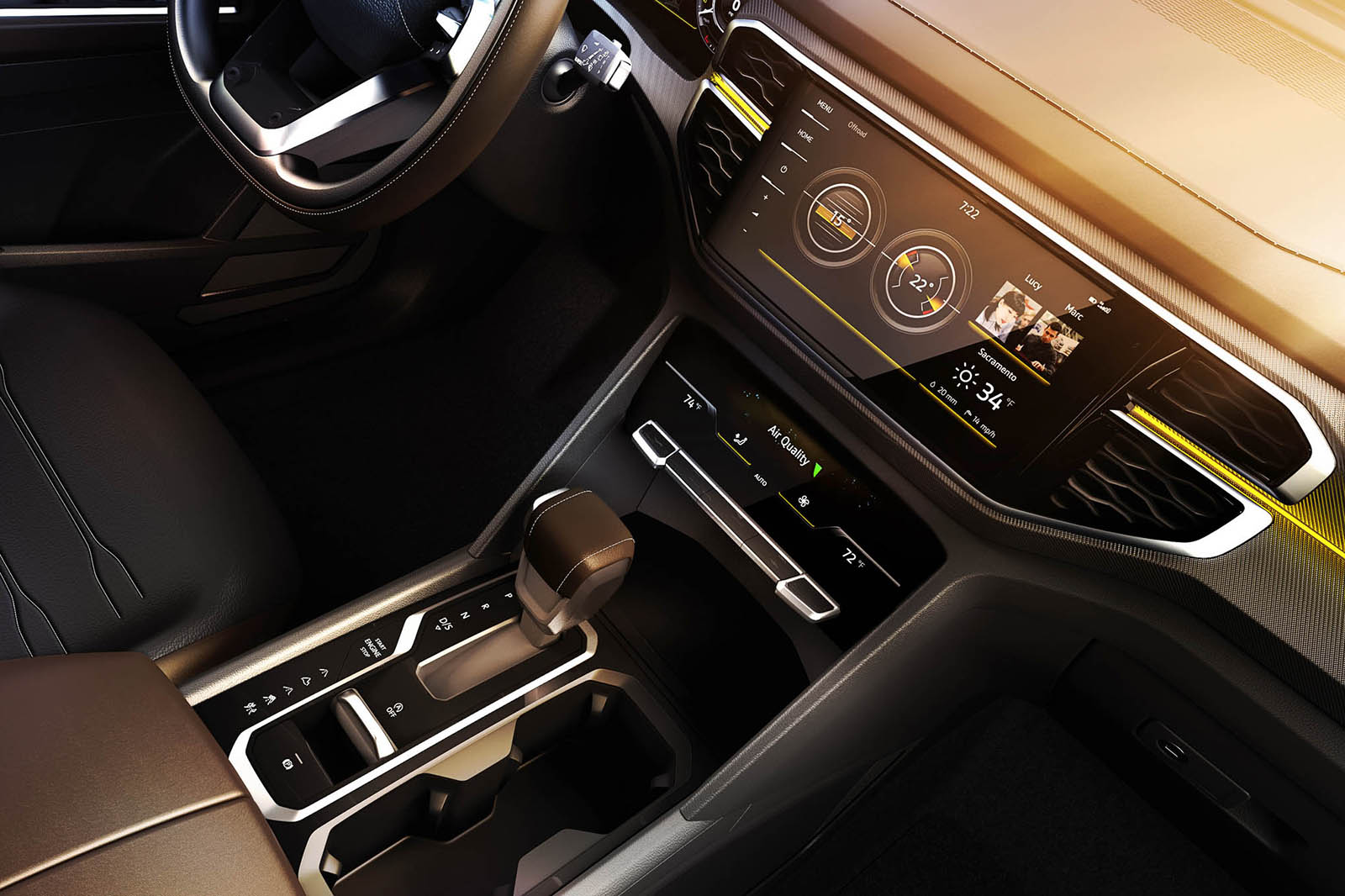 The four-door dual cab body of the Tanoak is combined with a cargo box that extends to 1627mm in length and 1450mm in width. The width between the rear wheels wells is put at 1280mm, while the height of the cargo bed is a claimed 530mm.

The lower-hinged tailgate at the rear extends the overall length of the cargo box by 633mm to a total of 2290mm when opened. To maximise load space, the concept’s full-sized spare wheel is mounted underneath the cargo box, making it accessible even when it is fully loaded.

VW’s decision to base the Tanoak around a unibody MQB platform follows the example of the Ridgeline, which is based on the same structure that underpins Honda's Pilot SUV - the so-called Global Light Truck platform, as it is known internally at Honda. As well as offering greater refinement as the ladder frame arrangement used by the majority of pick-up models offered in North America, the MQB structure is also claimed to provide the new model with valuable economies of scale with the Atlas SUV and its new stablemate, the Atlas Cross Sport. 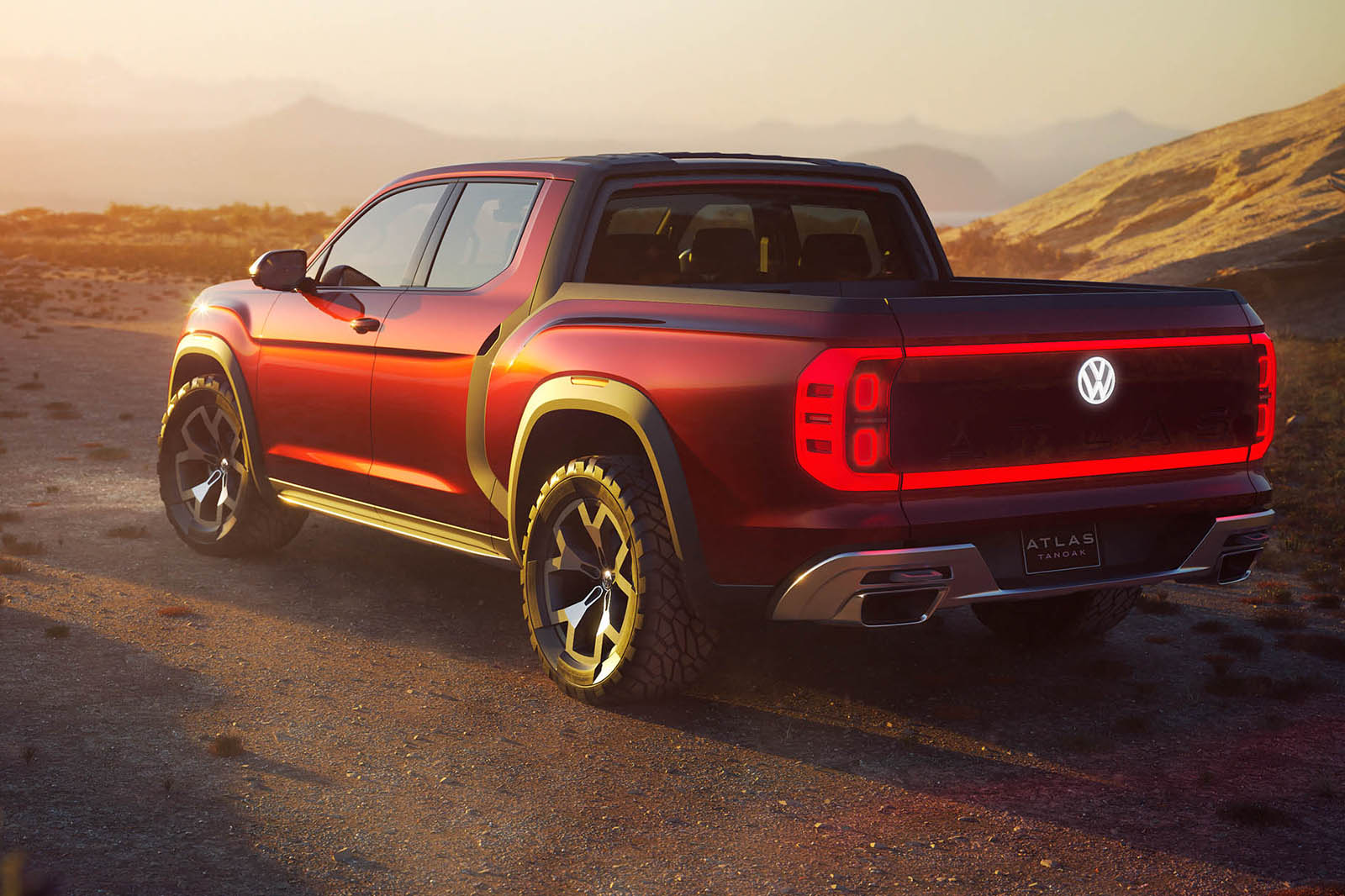 In the creation of its new pick-up concept, VW has extended the wheelbase of the MQB platform that underpins the Atlas by 280mm to 3260mm. By comparison, the Ridgeline receives a wheelbase of 3180mm.

VW is not specifying what structural modifications it has made to its MQB platform to meet the sort of payload and towing expectations of prospective customers in the development of its new pick-up, saying only that the Tanoak “follows the technical DNA” of the Atlas SUV.

Inside, the Tanoak continues the design theme already established with the Atlas SUV but in a more contemporary manner, featuring new high-definition digital instruments and VW's latest touchscreen infotainment system. It also introduces newly designed switchgear within a bespoke steering wheel and broad centre console, as well as ambient lighting and, in keeping with its conceptual nature, more upmarket materials.

VW claims its latest concept provides seating for up to five, but while the outer two seats at the rear are contoured, the middle one is raised and rather flat. Entry to the cabin, meanwhile, is via four conventional front-hinged doors. 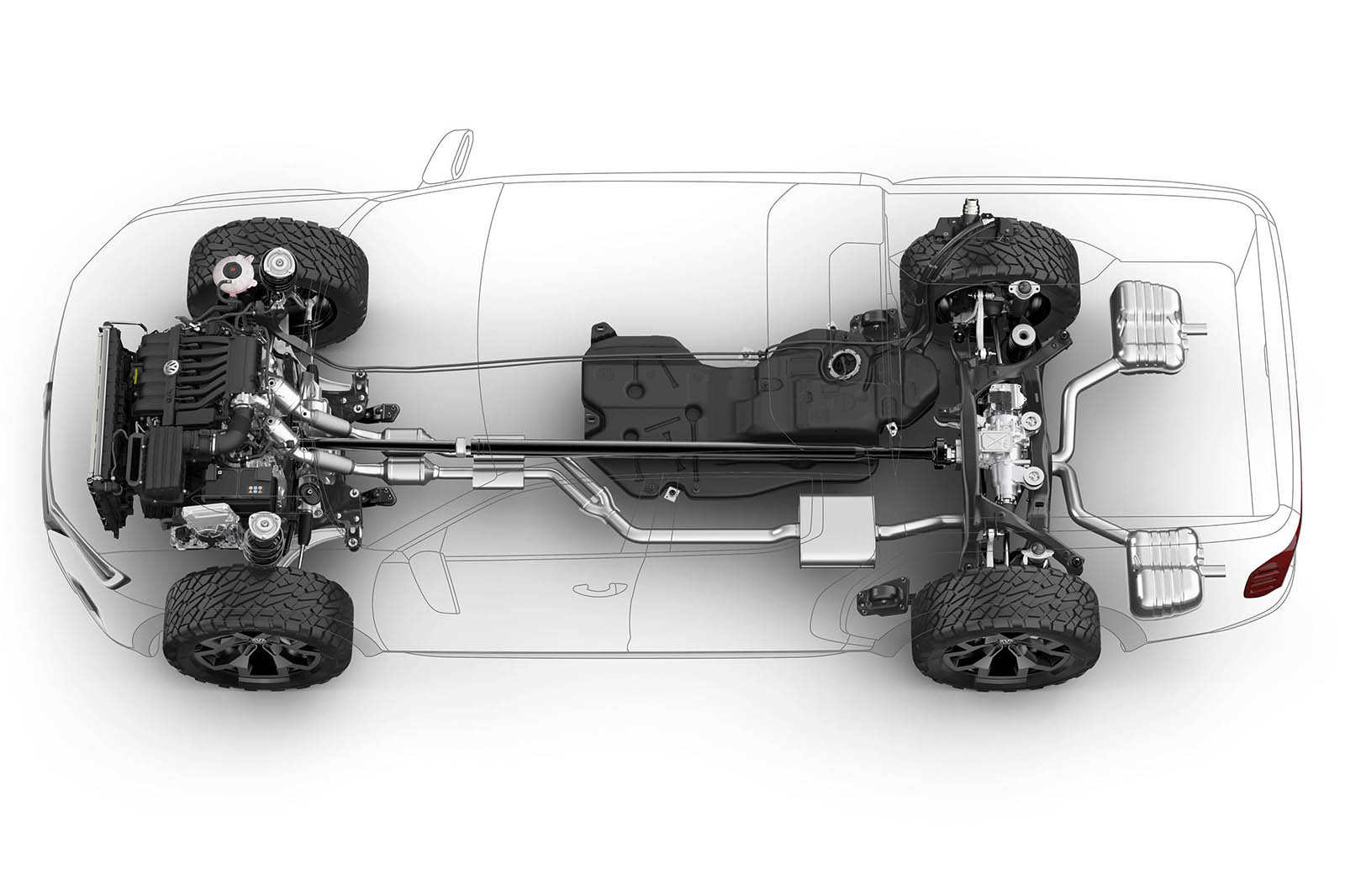 Power for the Tanoak comes from the same naturally aspirated 3.6-litre V6 petrol engine offered in high-end versions of the Atlas SUV. With 280bhp and 258lb ft, it delivers the same amount of power but incrementally less torque than the 3.5-litre V6 used by the second-generation Ridgeline.

The transversely mounted unit channels its drive through an eight-speed torque-converter-equipped automatic gearbox and VW’s multi-plate clutch 4Motion four-wheel drive system in a combination providing both high and low-range gearing via a so-called Active Control function.

Plans to offer low-range gearing on the new model are a departure from the Atlas SUV, which comes exclusively with high-range gearing. VW also says it envisages offering a number of driving modes, including on and off-road settings - the latter of which has been conceived around an electronic system offering a locking differential function.

Without a confirmed kerb weight, the performance figures of the new pick-up are largely theoretical. However, computer simulations suggest the Tanoak will reach 60mph from standstill in 8.5sec and reach a top speed limited to 118mph.

The unveiling of the Tanoak, whose name refers to a tree grown mainly in the western regions of North America, comes 18 years after VW aired its first pick-up concept targeted at US car buyers. In 2000, the German car maker revealed the Advanced Activity Vehicle - a unibody pick-up concept that previewed the styling of the first-generation 2018 Touareg.

Meanwhile, the decision by VW to preview its new Tanoak has further stoked speculation that its sister company Audi could be harbouring plans for a similarly conceived model as a premium rival to the recently introduced Mercedes-Benz X-Class.

Audi officials at the New York motor show wouldn’t directly comment on the possibility of the MQB underpinnings being used by an upcoming Audi pick-up.

“There is really nothing to comment on,” an Audi official told Autocar when asked whether the lengthened MQB underpinnings could provide the basis for a new Audi pick-up. “Even if we were planning such a model, we wouldn't communicate it without proper planning on all fronts.”

Nevertheless, the same official acknowledged the continued strength of the pick-up market in North America, saying: “In terms of volume, it is really a very lucrative market segment.”

I had assumed there was some legislation preventing DRLs running the full width of a vehicle and badges being iluminated, we've seen them on concepts before, if they're now permitted/cheap to acheive I imagine these will become the latest must-do trends, soon to be seen on all new cars and halfords inflicted bangers alike, Dubbers will go mad for them!

I had assumed there was some legislation preventing DRLs running the full width of a vehicle and badges being iluminated, we've seen them on concepts before, if they're now permitted/cheap to acheive I imagine these will become the latest must-do trends, soon to be seen on all new cars and halfords inflicted bangers alike, Dubbers will go mad for them!

I dread the thought... so many different varieties of tarted up builders vans T5,T6 etc on the road that have no nod to the original microbus