Volkswagen has confirmed plans for a new five-seat variant of its Atlas SUV with the unveiling of the arresting Cross Sport concept at the 2018 New York motor show.

The new Volkswagen concept closely previews a second Atlas model planned to go on sale in various markets, including North America and China, in 2019 as part of a global SUV offensive initiated by the German car maker under the title “Moving Forward”.

UPDATED: The Volkswagen Atlas Cross Sport has been officially revealed at the LA motor show - read the full story here

To be produced alongside the seven-seat Atlas SUV at Volkswagen’s Chattanooga plant in Tennessee, the Atlas Cross Sport is being positioned as a more affordable alternative to the likes of the BMW X6. 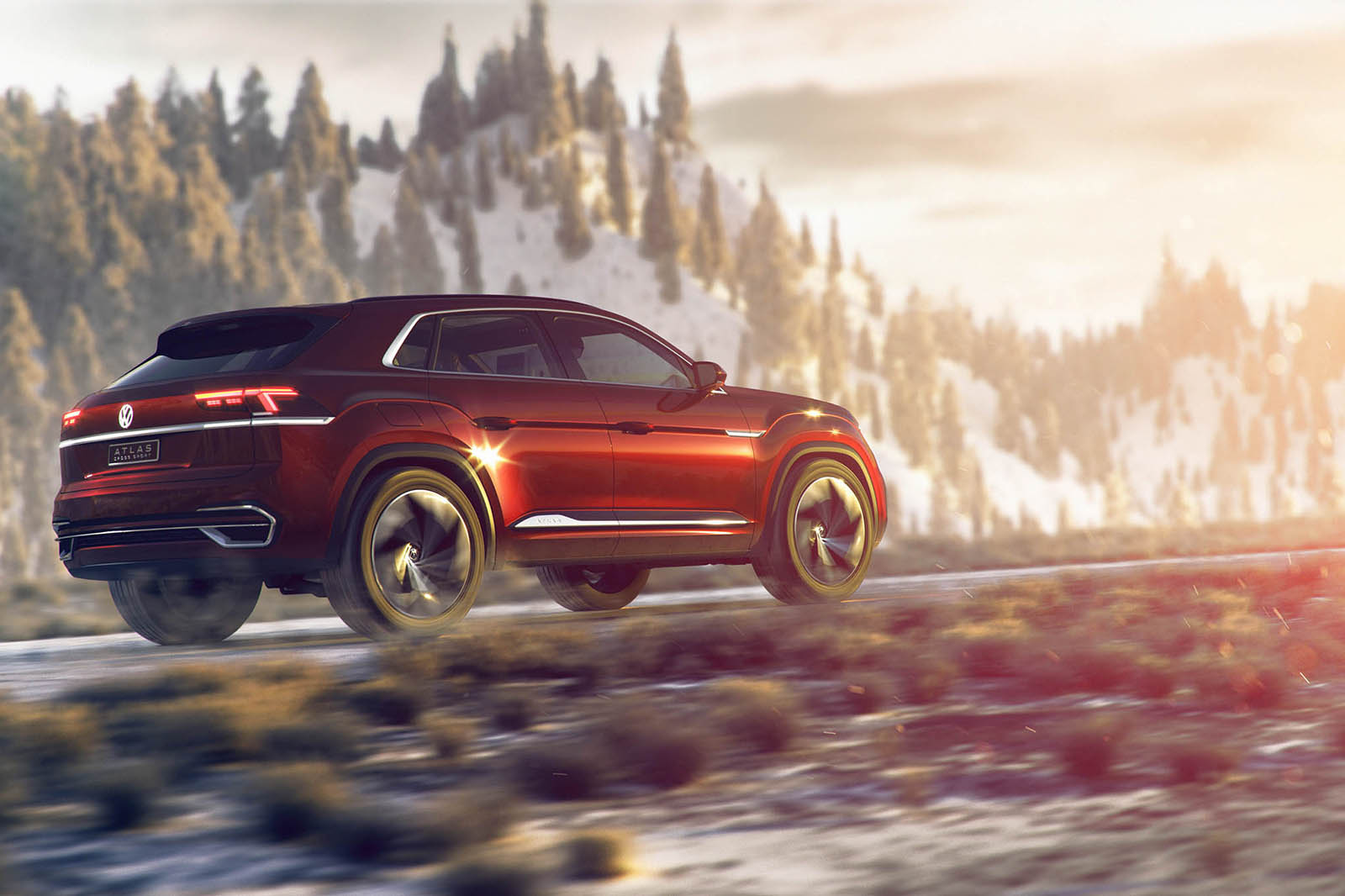 As with the Atlas SUV, it is based on Volkswagen’s MQB (Modularen Querbau – modular transverse architecture) platform.

Stylistically, the new Atlas Cross Sport concept closely resembles the Atlas SUV but with some subtle styling changes that are expected to feature on the production version due out next year. 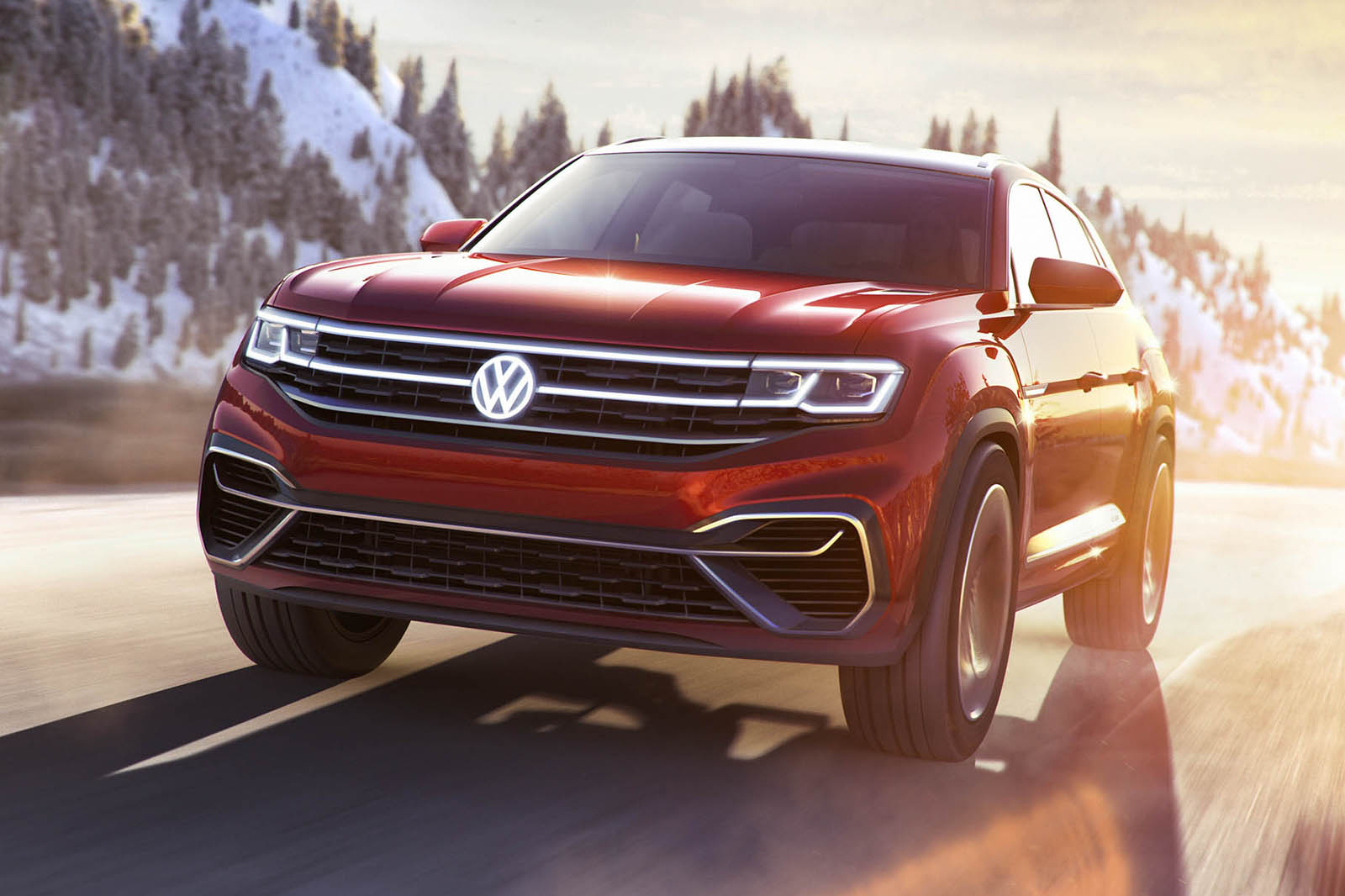 Further back, the Atlas Cross Sport adopts a contoured bonnet, prominent wheel arches filled with 22-inch wheels shod with 285/45 tires (tyres) as well as a heavily raked windscreen and structured flanks with a deeply etched swage line along the deep doors.

The main departure between the two Volkswagen SUV models is evident at the rear; the Atlas Cross Sport receives a more heavily plunging roofline than the existing Atlas SUV. It also sports a shallower glasshouse and racier C-pillar styling than its more practical sibling.

The rear, meanwhile, is dominated by a pair of high set LED tail lamps as well as a large tailgate featuring an aerodynamic enhancing spoiler above the rear window and a full width LED light band that wraps around into the rear fenders. 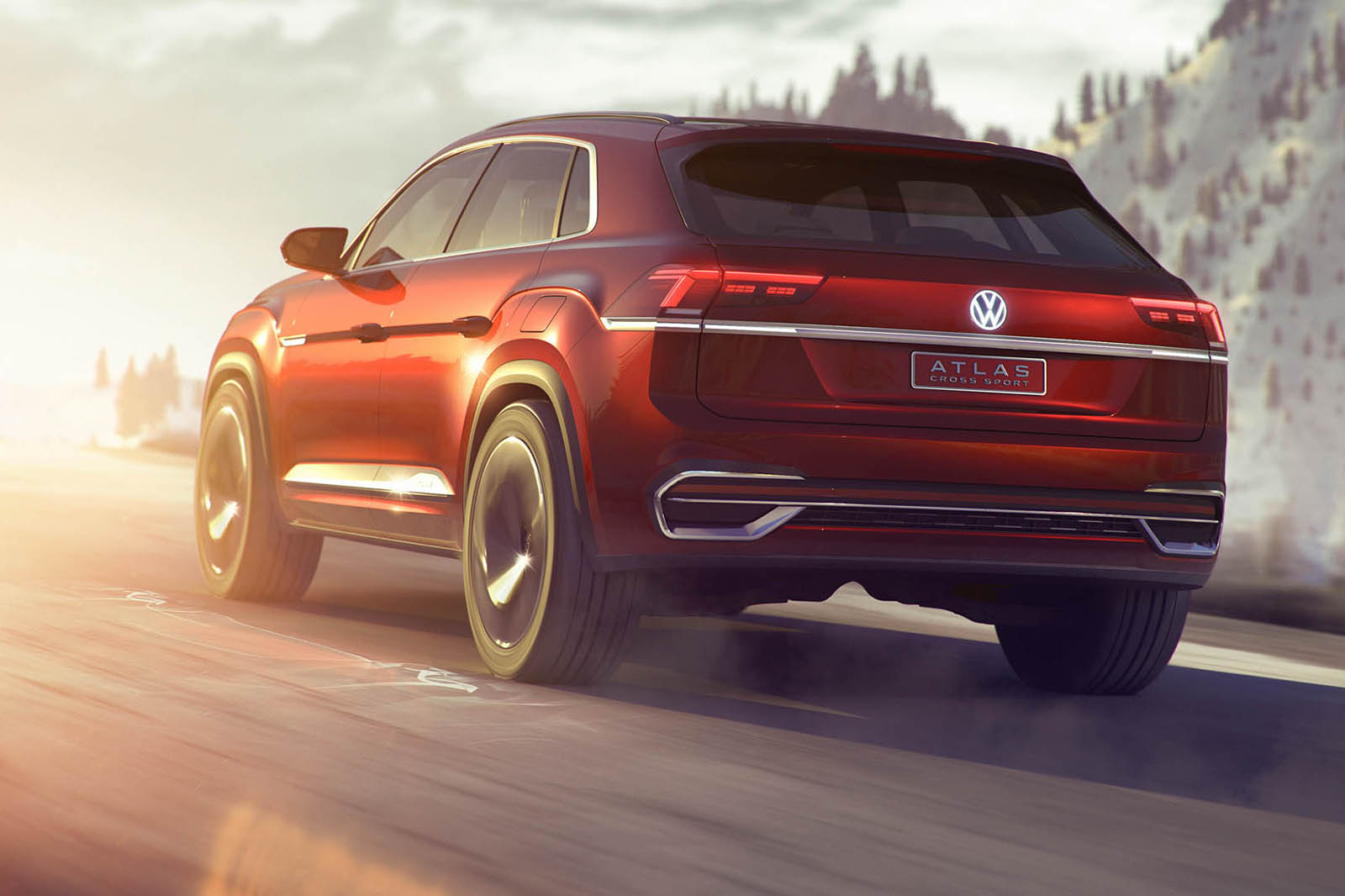 With a length of 4847mm, width of 2030mm and height of 1736mm, the Atlas Cross Sport is 190mm shorter, 41mm wider and 42mm lower than the existing Atlas SUV, with which the new Volkswagen model shares its 2980mm wheelbase.

As well as previewing the appearance of the upcoming production version of the Atlas Cross Sport, the concept on show in New York also serves to showcase a new plug-in hybrid (PHEV) powertrain being developed by Volkswagen as an option to the existing gasoline engines offered in the Atlas SUV.

The new plug-in hybrid powertrain uses an atmospheric 3.6-litre V6 gasoline engine developing 276bhp and 258lb ft of torque in combination with two electric motors – one mounted at the front developing 57bhp and 162lb ft and another at the rear with 114bhp and 199lb ft. 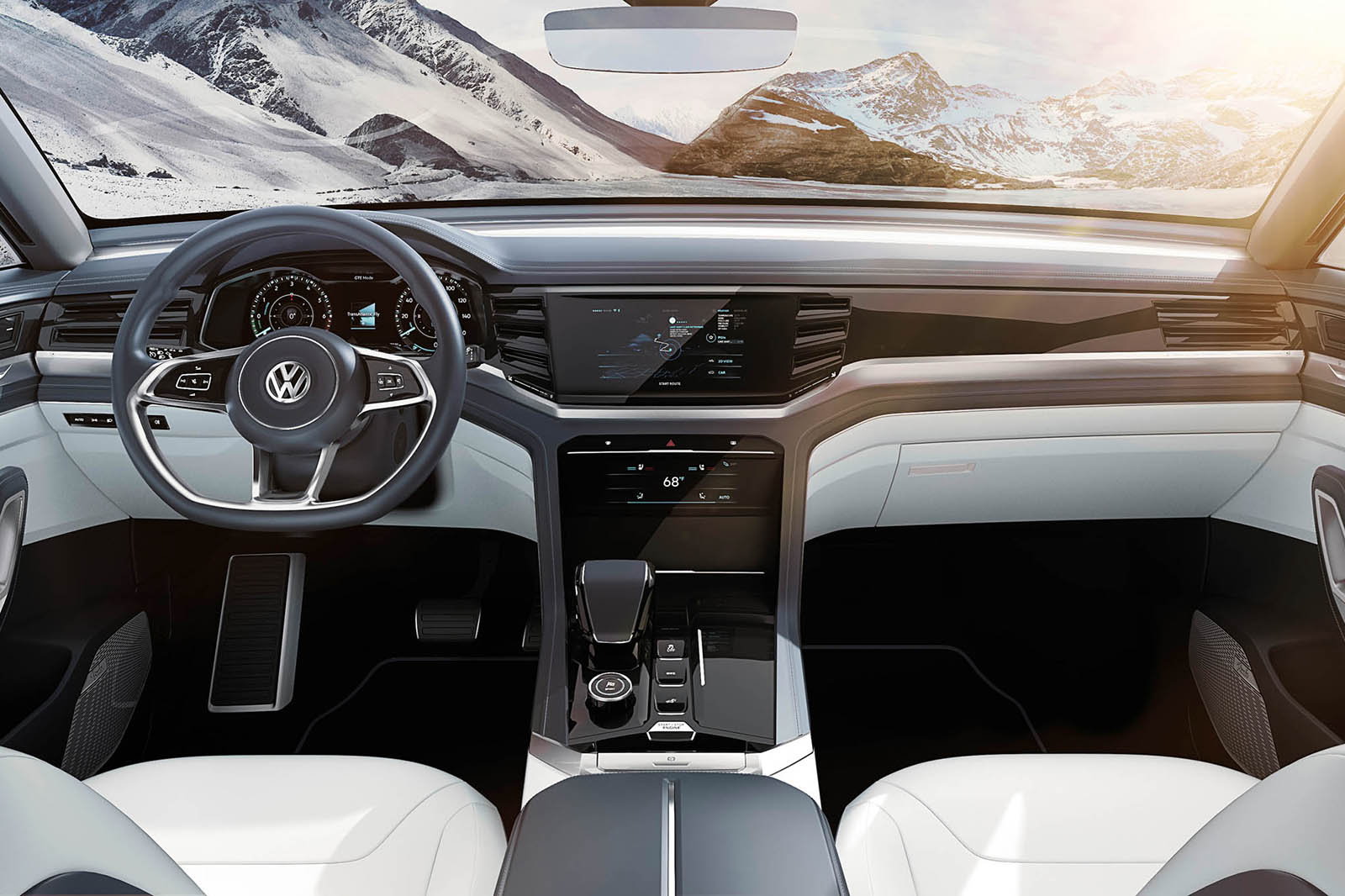 Together, the three power sources provide the Atlas Cross Sport PHEV with a combined system output of 355bhp and 494lb ft. The gasoline (petrol) engine and front electric motor provide drive to the front wheels via a six-speed dual-clutch gearbox, while the rear electric motor powers the rear wheels, endowing the new Volkswagen models with four-wheel drive capability.

The driver can choose between four modes: e-mode for all-electric propulsion, hybrid with a combination of the gasoline engine supporting the electric motors, GTE offering maximum performance and Battery Hold in which the energy content of the battery remains at a constant level. There are also seven different driving profiles: on-road with either comfort and eco, off-road with rocks, sludge and gravel as well as separate sport and snow programs.

Volkswagen has not revealed a curb (kerb) weight figure for the new model. However, official performance claims point to a 0-60mph time of 5.4sec and a limited 130mph top speed. 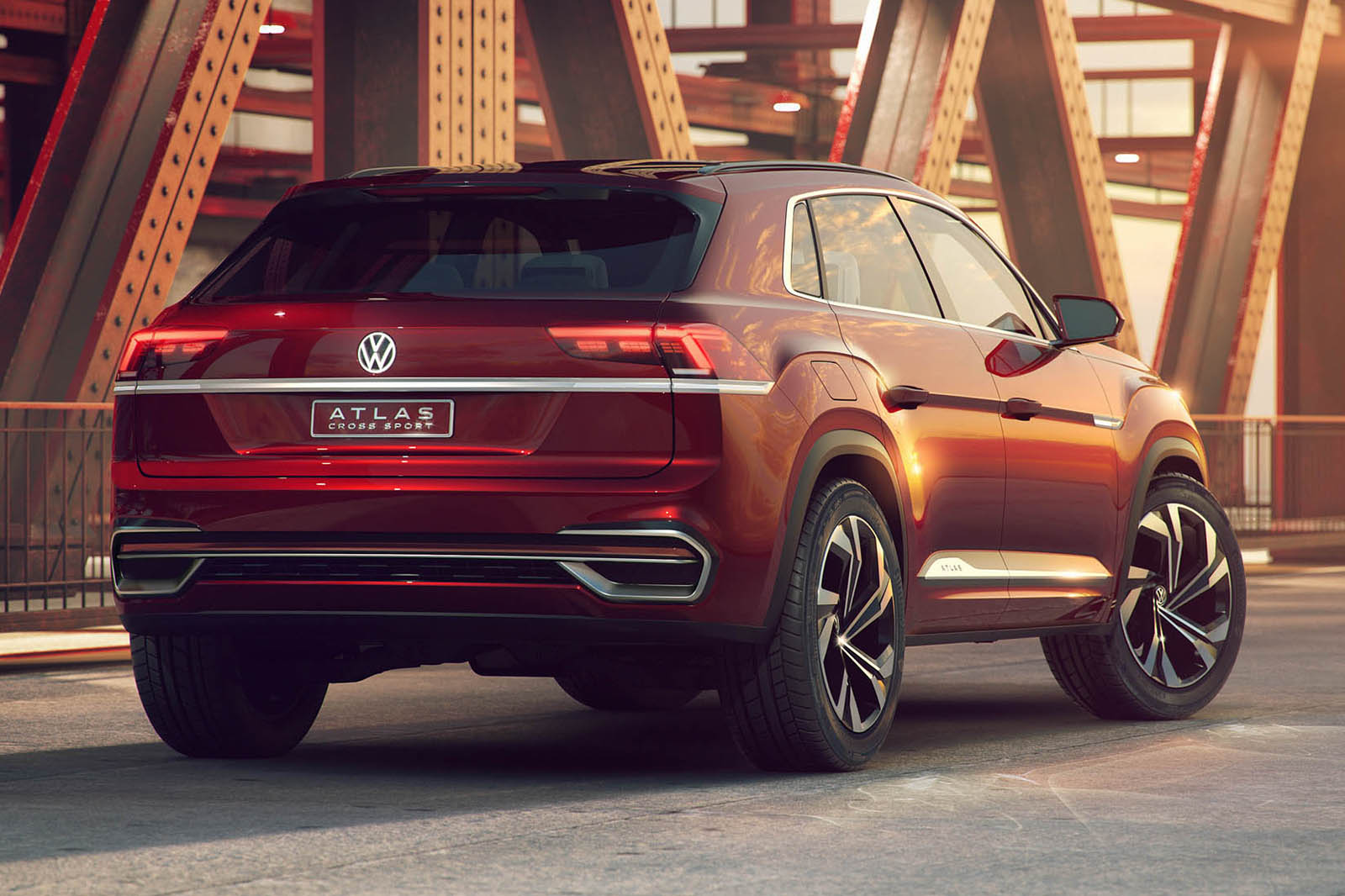 Energy used to power the electric motors is stowed in an 18.0kWh lithium-ion battery mounted within the floor of the luggage compartment. It is claimed to provide an all-electric range of up to 26 miles on the EPA test cycle (44 miles on NEDC). Total range, meanwhile, is put at 620 miles.

Also revealed in New York was a more conventional mild hybrid (HEV) powertrain also set to be offered in the upcoming production version of the Atlas Cross Sport. It relies on the same combustion engine and electric motors as Volkswagen’s new plug-in hybrid powertrain but receives a lower combined system output of 310bhp and 494lb ft.

Without the plug-in capability of its more advanced hybrid sibling, it also uses a significantly smaller lithium-ion battery with a claimed capacity of 2.0kWh. This provides it with a limited all-electric range of 1.5 miles and an overall range of 595 miles. As with the plug-in hybrid powertrain, kinetic energy generated during braking and extended periods of coasting are recuperated and stowed in the battery.

The design of having the ICE

So, so silly. When does it

So, so silly. When does it stop? I hold the BMW X6 responsible for this increasingly stupid trend for ‘coupe’ SUVs. At least with the Atlas you get a massive estate body with room for 7 people or lots of load space. This is just pathetic.

Can I have the Happy Sport please?