BACK TO ALL OPINION BLOGS
Currently reading: Speed limiters may create more dangers than they prevent
UP NEXT
Opinion: The Monza Rally is Rossi's to win if he can find a team

Speed limiters may create more dangers than they prevent

News that the British government had agreed to adopt European plans to fit speed-limiting devices to cars from 2022 is bound to depress anyone who loves driving, given that our enjoyment is largely based on control of our vehicles.

However, those who don’t feel as we do about driving are likely to anticipate what they will see as knee-jerk criticism and dismiss it.

But there are far bigger and better grounds for criticising the speed governor idea than a mere reduction in driving pleasure.

The wholesale reliance on electronics to control a vehicle’s maximum speed, while relying on a human driver for all the other functions – steering, slowing, gearchanging, overtaking, braking (as opposed to pre-collision braking) and sudden reactions such as obstacle avoidance – has very worrying aspects.

Rather than helping to reduce Europe’s 25,000 road deaths each year, it’s quite likely that this system will simply create a whole new variety of accidents. Here are some of the concerns:

• Inattention: Anyone who drives long distances in tightly speed-limited conditions knows about the problem of inattention and its contribution to a driver falling asleep at the wheel. It happens enough on our motorways already, and in wide-open Australia and the US it is a constant problem.

• Poor mapping: Many of our cars already provide guidance to ruling speed limits, although they don’t yet actually cut our cars’ speeds. Very often these readouts are wrong. Who will map every metre of every road correctly, and update it? Who will make the same limits apply to every car, when limits change all the time? Stand by for unexpected rear-end collisions, or people leaving the road, plus a sharp increase in queues and frustrated drivers.

• Variance: Not everyone’s 40mph or 60mph is the same as that of the car driving behind or ahead. In the miles-long convoys that are sure to be created by this – a source of aggravation on their own – frustration is an absolute certainty. And whatever you say about frustration being a mere human frailty, it has huge potential to create head-on collisions as drivers who “can’t take it any more” take chances to get past.

• The ability to drive through the system: It’s said the authorities plan to ‘sell’ this new system to us motorists by making it possible for us to override by pressing harder on the loud pedal. That means that while many of the country’s drivers accept a 50mph limit, many more will learn exactly where and when to go for the override. Result? Further frustration.

• The role of older cars: There are between 25 and 30 million cars on our roads, none fitted with these new devices. Chuck in a few hundred thousand vans and trucks for good measure. At two million new car sales a year, it’ll take 20 years for the car parc to be replaced. For the first decade of the new regime, unrestricted cars will outweigh those with speed limiters. It’s anyone’s guess how this will play out in the traffic, but the presumption must be that it won’t be pretty. As far as the driver of a 2020 Ford Focus is concerned, the driver of the 2023 model will be making a lot of unwarranted and unpredictable speed reductions. More rear-end collisions beckon. 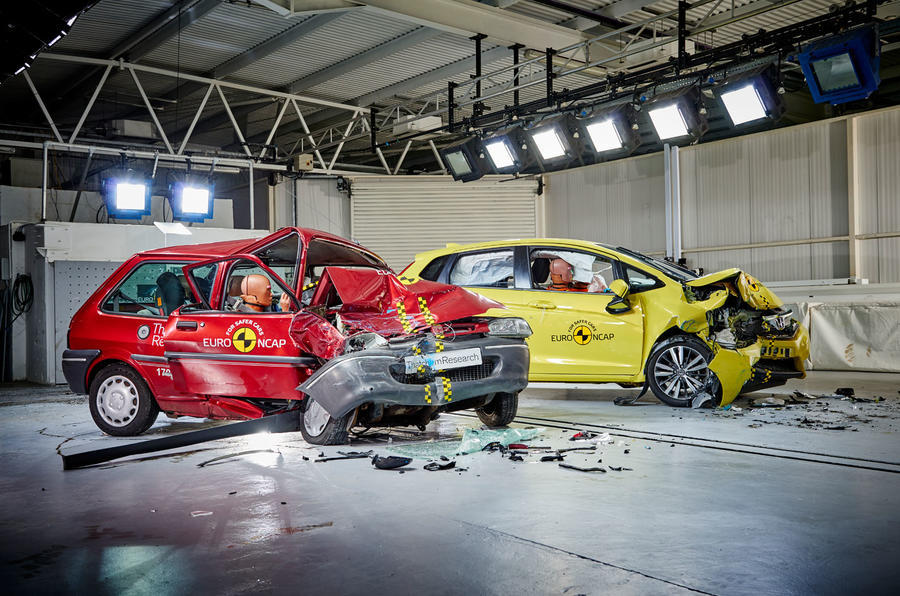 The child-like excitement of the road safety lobby, who speak as if this nonsense were a simple issue whose benefits will be delivered from a particular day in 2022, exposes their extreme naivety. So does the ridiculous assertion from EU commissioner Elzbieta Bienkowska that the package of safety measures she plans “can have the same kind of impact as when seatbelts were first introduced”.

The wonderful thing about seatbelts (and airbags, and electronic stability control) was that they made a car comprehensively safer whatever you did with it. Under the controlled speed limit system, it will be as easy as ever for cars to collide at intersections, drive off roads and rear-end one another because of driver inattention, some of it driven by the new frustration and boredom of drivers. Ironically, it will still be possible for drivers so minded to wilfully exceed speed limits by as much as ever.

Introducing guaranteed generators of driver fatigue and driver frustration, while removing an important avenue of driver discretion, is emphatically not the way to go. It might even make things worse.

What is needed is clever thinking and copious research, by people with a deep understanding of cars and their drivers. This group does not include a bunch of politically motivated types like Ms Bienkowska and the road safety lobby. They cannot understand the implications of the system they’re trying to create, and it seems evident that they don’t even want to find out.

A better system would be a series of warning lights in clear view as you approach the limit so that compliance is still in the driver's control. A bit like shift lights on an F1 car

Nanny is out of control!

A warning system is enough. If you cause a mishap due to speeding your insurance will go through the roof.

29 March 2019
I'm sure the relatives of the person killed would be delighted that the speeding driver's insurance premium had increased and would consider this entirely commensurate with the loss they had suffered.

..... this is the level of naivety  and ill thought out rhetoric I would expect from these faceless Brussels beaurocrats.

If they had any intelligence at all they would do a 'proper job' rather than joining the Brussels gravy train - bloody chisellers, the lot of them.

To think we pay for this level of incompetence is mind blowing. I mean who the hell is Elzbieta Blenskowska anyway? certainl not anyone we have voted into a position of power and ignorance thats for sure.

Probably doesnt even have a driving licence having been weaned on freebie parliament Mercedes Benz's....at our expense.

Apparently she is an animal welfare torch bearer....is this her qualification for her position of power?

Honestly, you couldnt make this crap up in your wildest imagination.

We all see the chaos caused

We all see the chaos caused on dual cariageways by trucks with faint speed limiter differences causing miles of overtaking hold ups. To the point they designate some mainly uphill stretches as HGV's are not allowed in the 2nd lane. Now imagine this across 4 lanes (smart motoways), imagine someone in the outside lane trying to get across all lanes of busy traffic with hardly any gaps to make an exit, suicidal!

pretty much everything mentioned in the artile already exists. haven't we all encountered someone doing 30 in a 40 because - for whatever reason - they didn't see the sign, or simply forgot that the limit had changed after actually speeding up to 40? haven't most of us, at some point, done that ourselves? did it cause chaos? no, don't be silly! people's speedos reading sightly differently is not going to cause mental breakdown and motorway pileups, it doesn't now so why should it then? it is over-ridable, you can boot it and get past. not only that, if you actually do drive to the speed limit normally, you keep going under and over it anyway due to - amongst other things - gravity. does all hell break loose? no, not even slightly, and those variances are far greater than speedo discrepancies. some people do drive below the higher speed limits anyway, all that happens is that you overtake them when you can. Seriously, what's all the fuss about? what's being completely ignored is that this means people will be able to spend more time actually watching where they're going and less time staring at their clocks, which is a better situation. Some people here (at the time of me typing there's only the first 4 comments) are talking as if this is somehow the cause of things which have been happening basically forever; people cutting across all the lanes of a motorway to get to an exit at the last moment? seen it quite a few times! The only people this is actually going to make much of a difference to are habitual speeders, and the complaints from such people are essentially complaints that they can't drive dangerously any more. that being said, on a fairly empty motorway with a well maintained car, the difference between 70 and 90 is mostly fuel economy, not safety. I do think it needs to have an "off button" for if it gets it wrong and has you limited to the 30mph road that runs beside the 60-70mph road you're actually on. I've driven vehicles (citroen relay van) with a device like this (it had to be manually set to the required speed) and liked it as you didn't have to look at your clocks unless you were going downhill, but i did hate it for the fact that when you downshifted going uphil it often would hesitate before applying power again, leaving you going far slower and needing to downshift again, often then having the same problem again. it also would let you revmatch a downshift, and ocassionally hesitated on an upshift too. it was far from perfect, but the idea was fine. I do think this is more to go wrong, that there will be times when it causes problems which otherwise wouldn't have existed, and that cars are already too complicated for their own good, over-sized, and a bit pricey. I also think that speed is misrepresented in crash statistics as the actual cause.

i didn't realise i'd typed that much :/  and i meant "wouldn't let you revmatch a downshift"

Will we even notice?

27 March 2019
Given our crowded roads and the high percentage of people who through ignorance, anxiety or lack of ability, drive way under the limits, I rarely get to even reach a speed limit, let alone exceed it. Can't see it being much different to now.

Apart from all the great points made in this article, we need to tackle the real causes.

Myself I don’t plan on ever buying such a vehicle anyway. But the idea of 10 cars in front all sat watching their favourite YouTube channel is not very appealing.

Anyone driving for a living will have noticed this trend to watching video while driving.