The new Volvo XC60 is probably the easiest car you’ll have to get your head around this year.

You know how people love SUVs and crossovers? Well, they like them so much that the previous-generation XC60, despite being nine years old, sold in greater numbers in 2016 than it ever had in its life before. That’s not how car sales patterns are meant to work; they usually peak a year or two after launch, and then slowly fade thereafter. But it shows how much people want a) a Volvo, b) an SUV and c) ideally, a Volvo SUV. So here we are.

Volvo is undergoing something of a resurgence, what with the new Volvo XC90, and S and Volvo V90. This new XC60 is in the same vein, which is why if you’ve been following Volvo’s newfound good fortune at all you’ll know what to expect.

It’s an Audi Q5/BMW X3/Land Rover Discovery Sport-sized car, then, that uses the same Scalable Product Architecture (SPA) that underpins Volvo’s ‘90’ models. At 4.7m long, the five-seater is a little longer and wider but lower than the previous-generation XC60, and designed on the outside to have some new Volvo cues but retain lots of the appeal that made the old car such a success.

When it comes to suspension and powertrains, here’s the deal: double wishbones at the front, with an integral link setup at the rear, with coil springs at the front and a transverse leaf spring as standard at the back, and air springs optional all round.

There’s nothing bigger under the bonnet than an engine of 2.0-litres and of no more than four-cylinders. That can mean petrol or diesel, turbocharging, or supercharging and turbocharging, or hybrid assistance, with some compressed air thrown in too, which I’ll come back to.

In the UK, we get two diesels (a 187bhp D4 and a 232bhp D5), one turbo petrol (the 250bhp T5) and one petrol-electric hybrid (the 401bhp T8). All get eight-speed autos and all-wheel drive and, being a Volvo, about twenty dozen safety systems are standard, and upgrades on them optional.

On the outside, the XC60 is at once familiar and yet obviously new at the same time; a bit like the Volvo XC90, in that way. Volvo talks about angling in the windows at the top to narrow the car’s upper profile, and throwing back the windscreen, to make it more car-like and rakish. And while roof and floor are lower, it’s the roof that has gone down more than the floor.

But this is still one of the more traditionally-proportioned SUVs. For all the changes it still feels pretty light and airy inside. Materials choices and colours no doubt help, and they continue the good work done by the 90 models. Fit and finish is spot on, and the design feels more ‘Scandinavian kitchen’ than ‘Japanese hi-fi’, pleasingly.

There’s plenty of space for occupants front and rear, perhaps because Volvo thinks that’s more important than a massive boot which, at 505 litres, is about 45 litres shy of the class norm. The driving position’s good. Lower than before, apparently, but while again Volvo talks about increasing the height of the centre console (necessary for packaging the batteries of hybrid versions) and standing the dashboard upright so it feels more cockpit-like, it’s still pretty relaxed.

Ditto the way it drives. Volvo says the 90 series cars are meant to be ‘relaxed’ and that the 60 should make you feel ‘inspired’, as if the two are differently perfumed shower gels.

Whatever, the XC60 is a way off being the most dynamic car in the class, but despite the fact that you and I enjoy driving, I don’t have a particular beef with that. Confident and predictable is what Volvo has gone for and confident and stable is what it has achieved.

The ride comfort is particularly good, better I think than anything out of the 90 range so far. The XC90, for example, has fine body control for an SUV but a sometimes over-brittle ride as a result; the S and Volvo V90 lope along quite nicely but with an amount of float that you couldn’t allow on a taller car, like the XC60, because it would feel dreadfully boaty.

Showing the kind of progress that suggests Volvo’s engineers are learning how to get the best from the SPA platform, then, the XC60 rides both smoothly and yet has decent enough control of its body movements. There are more agile-feeling SUVs in this class – Mercedes and Audi and BMW make them – but if you want an agile-feeling car, I’m generally inclined to think you shouldn’t buy an SUV in the first place. The XC60 makes confident, relaxing progress. It’s as if Theresa May is the chief chassis engineer: strong and stable, lads, strong and stable.

The steering, at three turns between locks, and with a decent turning circle, is of good speed; it’s accurate and mostly pleasingly weighted, too. And although it’s a little easy to whack some of the steering wheel controls, and it’d be nice if all versions had gearshift paddles, it’s a good-sized and shaped wheel. If you push on a bit, the XC60… look, let’s not pretend buyers have any intention of finding out, shall we? But like most SUVs, ultimately it can surprise you with how fast it can go, albeit body control gets a bit loose.

When mooching about, though, the 232bhp D5 engine, with its ‘power pulse’ compressed air lag-reduction system seems quieter than in early SPA installations. I’d want a back-to-back test before saying for sure how quiet – or, I still suspect, gruff – it is compared to, say, the equivalent Audi or Mercedes unit. And in Comfort or Eco modes – for you do, inevitably, get driving modes to choose from – the gearbox’s response can be overly relaxed when you ask something of it. That’s why standard paddles, to easily get you into the right gear, would be handy. But you can select an Individual driving mode, where the chassis can be left in its more compliant setting but have the powertrain turned up to Dynamic, which gives a better response. It’s still quite calm: Volvo’s idea of dynamic is not like, say, Porsche’s.

Ultimately, then, the XC60 continues Volvo's current decent form; it's a relaxed car with a high-quality feel inside and with an ambience and gait that's easy to warm to.

Unexpectedly, last year more than half of all Volvos sold were XC60s and Volvo XC90s, making Volvo first and foremost an SUV company – a situation that surprised Volvo executives just as much as it surprised anyone else. Given a sizeable proportion of those sales were 4x4s introduced nearly a decade ago, the new XC60 might keep it an SUV company for a while to come, too. 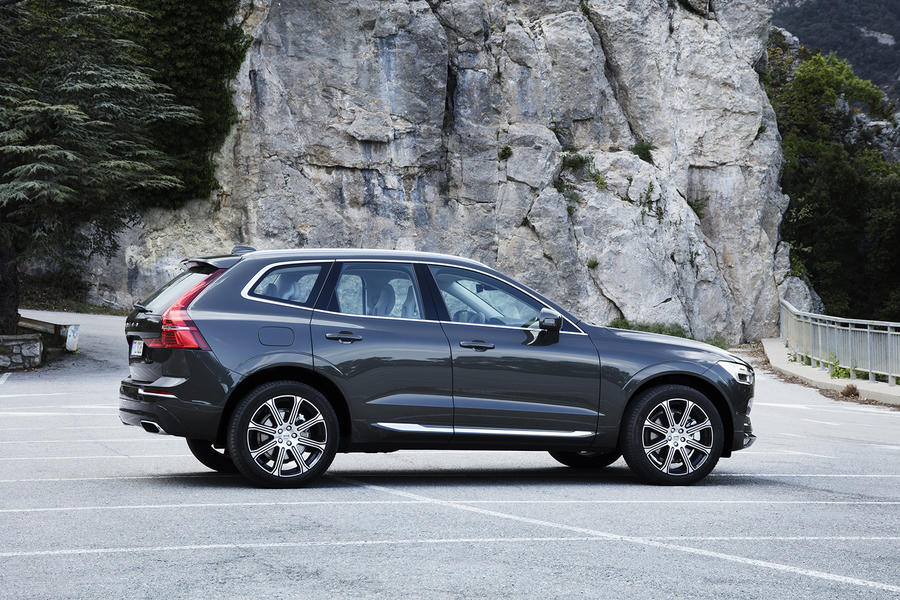 I really wanted one of these when I downsize the disco next year (I don't like the look of the new disco, and it's about time for me to get real on running costs). But the boot is just too small - a mondeo hatch has more space.
500ish litres is not enough if you have kids and dogs, it would struggle as a family car, at least with my family.
I love the looks and interior. Proper Scandinavian style. Nice looks, shame about the space!
Harry P 17 May 2017

The previous generation XC60 sold so well because it was a very decent and capable vehicle which benefited from the growth in SUV sales. However the latter sales success was mainly due to Volvo’s decision to massively discount the supply cost when leased. The fact that you could have a Volvo XC60 for less per month than a Ford Mondeo estate, meant it succeeded disproportionately to other vehicles in its class. Given that Volvo are highly unlikely to heavily discount the new model and pricing starting at £37K and going right up to 49K. I suspect that sales of the new model will be significantly lower than the previous model. No matter how impressive it may be, at these prices it will have a lot of very strong competition.
Mikey C 17 May 2017

Volvo's image tallies perfectly with the SUV type of car, so it's no surprise so many of their sales are SUVs now, especially with their classy looks at the moment. And they've engineered it to be comfortable instead of lapping race tracks, even better.
View all comments (14)